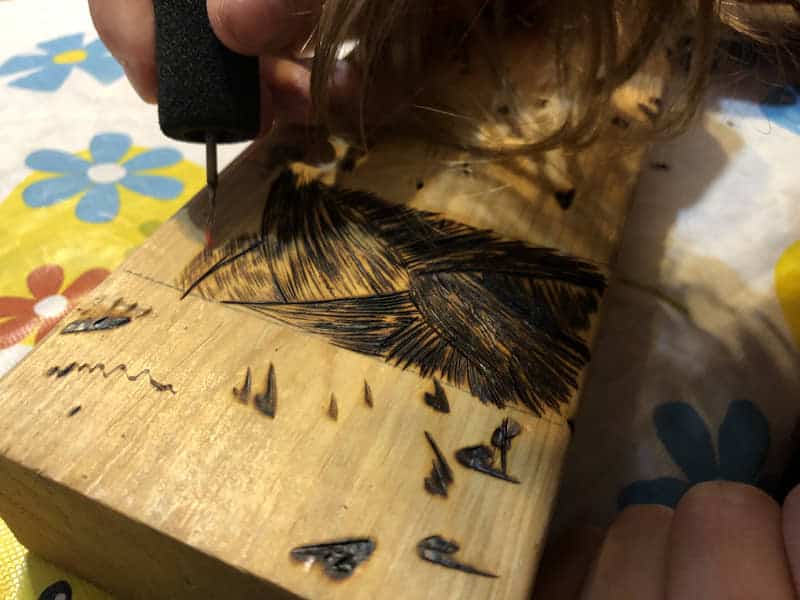 There are times when you head into the shop knowing exactly what you’re going to make and how to go about it. The process usually moves along nicely and the result is mostly what you imagined

The process may be enjoyable, but you don’t necessarily learn much, push your boundaries or improve your skills a whole lot.

On the other hand, heading into the shop just to experiment is a whole different approach. I’m guessing it’s a lot less common with our hobby. The phrase “plan your work, work your plan” is likely something most of us can relate to, but experimenting…playing around…without focus…that’s just a waste of time, right?

I rarely go into the shop just to try a few new techniques or see what happens when I do something specific, but I wish I did this more often. If you’re trying to improve your skills and push beyond your comfort level, experimentation is important, and it should probably be done often. Unfortunately, I get busy with everything else and tend to see it as a short-term waste of my time.

My son came across my pyrography tools the other day and immediately asked if he could do something with them. “What do you want to do?” I asked him. “I don’t know,” was the obvious answer. He was familiar with what my pyrography pens did, as he’s used them a few times before. He mainly just wanted to play around with them and see what happened. He just wanted to experiment. I didn’t realize it until afterwards, but it made complete sense. What if he cranked the heat up? Or pressed more firmly? Or used the pens on a very soft wood? Or on other materials like metal or paper? He just wanted to know more about the limits of these tools and what the results would be when he pushed their boundaries a bit.

It being Easter weekend, I went to the shop and cut out some Easter egg-shaped disks in black cherry. This would give him a canvas to work with. My woodburning approach is almost always to create patterns with the pyrography pens I have, but after doing that for a few minutes he opened up his computer to find some cartoon characters to draw. He placed a piece of paper over his computer screen, traced the shapes, cut the shapes out and penciled them onto the cherry disks. Bugs Bunny and Snoopy don’t have anything to do with Easter (Bugs Bunny wasn’t one of the original Easter bunnies, was he?), but who am I to tell my son he was doing something wrong. They turned out great, and he liked them so much, he decided to take them to school the next day to show his class. I hope those 10-year-old kids go easy on him.

Once he was done with the cartoon characters, he started playing around with the different tips I have, adjusting the heat and varying the pressure and speed at which he used the tips. He got some good results, and often called me over to show off his findings. “Look what happens when I turn up the heat but dab the pen really quickly,” or “This part of the wood looks different than the other part.” That last finding got us into a discussion about earlywood and latewood, and the differences in density in spruce. My house smelled like it was on fire for a while, but it was all in the name of experimentation, so all was good.

My son learned a lot from all of his experimenting. He also learned things that he didn’t even know he wanted to. I never thought to teach him about earlywood and latewood, but details about how a tree grows intrigued him. He’s a bit of a science geek, which is great.

All the fun we were having together piqued my daughter’s interest. Not wanting to miss out, she asked if she could do some pyrography on one of the cherry Easter egg disks. A heart, with an initial in the middle, was her approach. A very simple, elegant design, and one that spoke to her. Perfect. Anything that gets her into trying out something like this is great, as far as I’m concerned. After her one masterpiece, her curiosity was satisfied and she didn’t ask any more questions.

Playing around in the shop with any sort of technique that interests you is great for life-long workshop learning, and having a bit of success will breed future successes.  I’m going to try to overcome my notion that playing around in the shop is wasted time. I might even head there later this afternoon and spend a bit of quality time experimenting. I’ll let you know how it goes.

Google for Inspiration
One of the things I told my son to do was to Google “interesting texture” and see if anything spoke to him. If it did, he could try his hand at re-creating that texture or pattern with a pyrography pen. This series of lines, sort of like distant, grassy hills, was the result. And he learned a lot about how the densities of earlywood and latewood cause different looks in the same burned line.

Start with the Familiar
The stylus pen is usually where my son starts, because it’s what he’s most familiar with. He eventually moved on to the skew and spear shader I have. 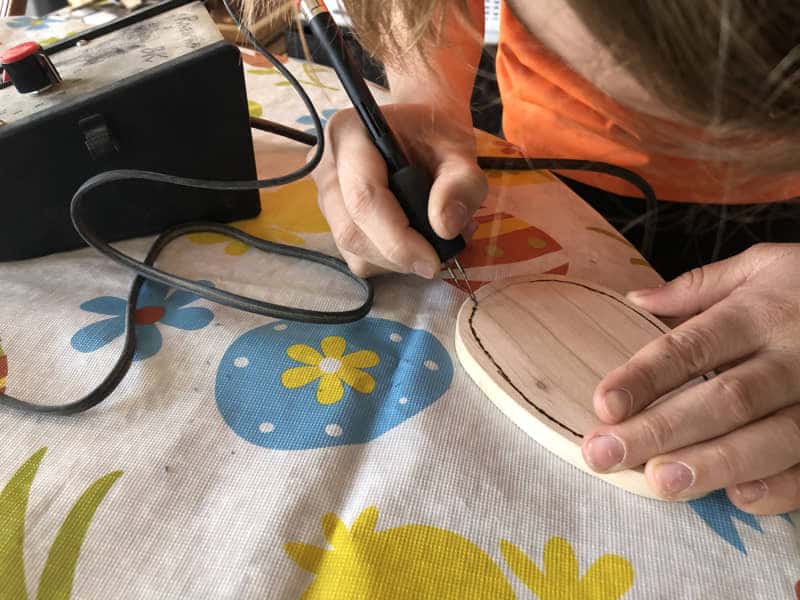 Looking Good
Cartoon characters was where my son started. Here, he’s finishing off Woodstock. You can see the paper template he made and then traced beside the cherry disk. He has some of his old man in him; that border of densely packed dots is one of my pyrographic specialties. 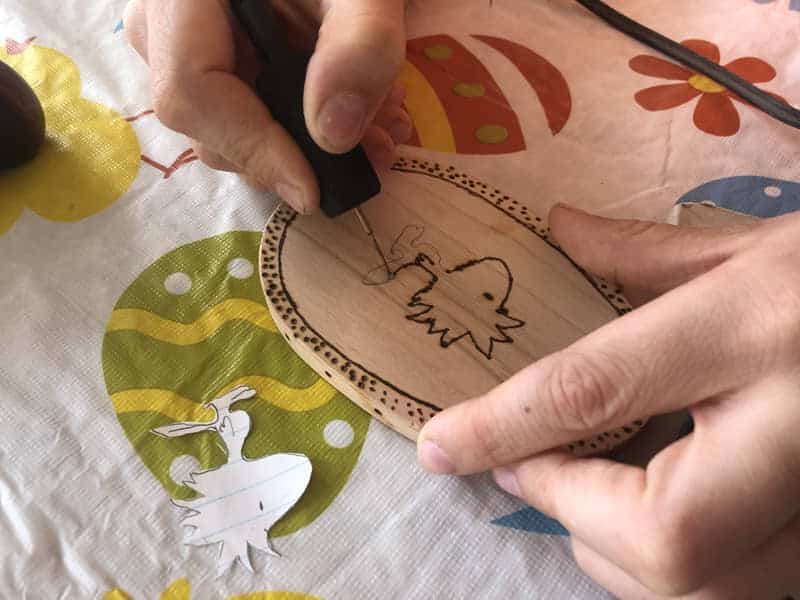 Patterns Can Be Fun
My approach is usually patterns. That’s my basket with an even, patterned border in the upper left. After my son made the cartoon characters, I encouraged him to try his hand at a pattern. He made the patterned design in the upper right. 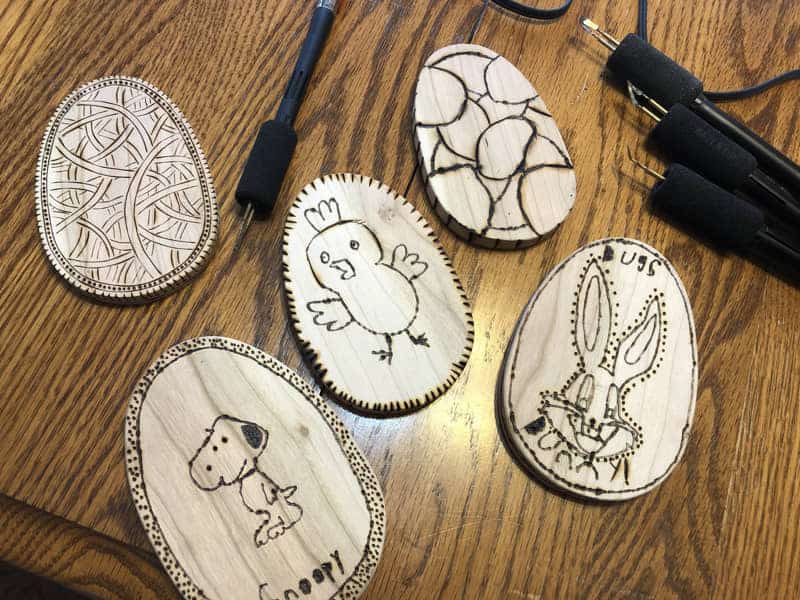 Try Everything…Experiment!
After the cartoons were completed, I encouraged my son to try his hand at multiple patterns and approaches while playing around with heat, pressure and a few other variables. This is a great assignment not only for pyrography, but for many other artistic skills. 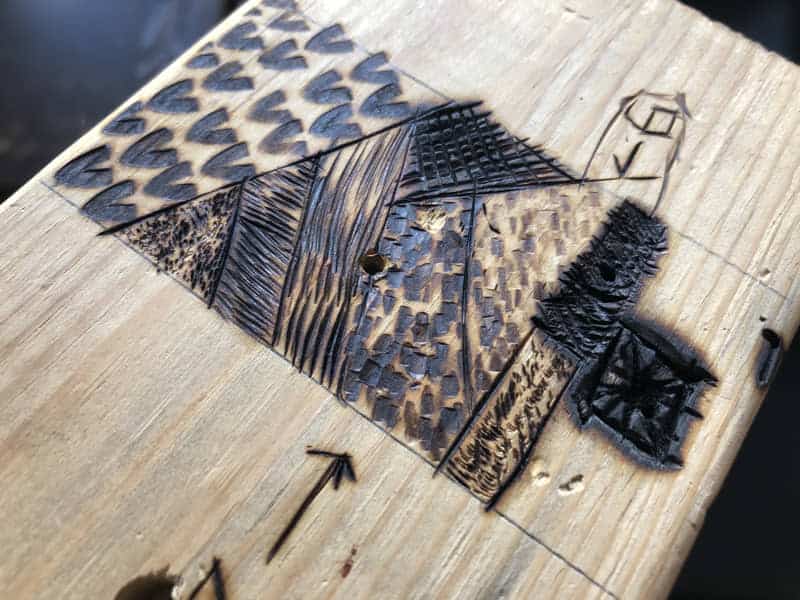 Couldn’t Stay Away
My daughter, after listening to my son and I play around for a while, wanted to try her hand at some pyrography. A simple, tasteful approach was what she came up with. 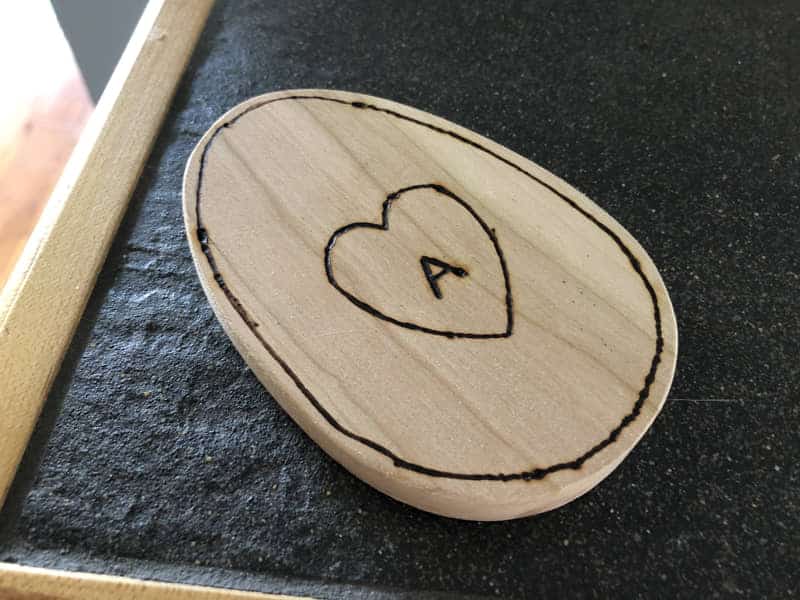