Rather than spend our hard-earned money, I thought this year some Christmas gifts would be best made by hand. My kids’ hands, more accurately. Nothing says “Merry Christmas” like a gift made by a child.

On the woodworking side of things…

Last week I forgot to mention a few little gifts my kids and I made. Rather than have them buy gifts, I thought it would be fun and a lot more personal for them to make small snowflake ornaments out of plywood. My nine-year-old son is super keen on making stuff, but my 11-year-old daughter doesn’t usually love the shop. Not wanting her to miss out on all the fun, I give her an extra nudge from time-to-time, mainly for the things. I think she will be successful at, and will enjoy. I’m hoping these projects give them both a bit more confidence and help them build some basic skills.

After we chose a snowflake design on the Internet, I traced the shapes onto paper and cut them out with scissors. They could (should?) have done the paper cutting, but with so many other things happening, I quickly took care of this step. I didn’t want to waste their patience on cutting paper when they really needed to save that for cutting wood.

We first took care of any holes in the designs with a cordless drill and my Brad point bit set. We were now ready for the main event: the scroll saw. My son, who’s used a scroll saw a few times before, was (too?) confident. After a very short lesson he stepped into the driver’s seat, and quickly cut way over the lines on the first turn. Bad for the snowflake, but good for his learning. We talked about how to anticipate the turns that were needed, and how cutting slowly was probably a better approach. It took him about 15 minutes, but his snowflake turned out really well.

Next, I called my daughter in. After seeing the mistakes my son had made, I gave a slightly modified lesson to my daughter. She started slowly, anticipated the turns, and after about 15 minutes also had a great little snowflake to brag to her brother about. I was impressed by her patience and focus. I think it was more of a healthy fear of cutting off her fingers that kept her attention that day. She’s a smart girl.

After some sanding (even newbies quickly learn to hate sanding), we were ready for a few light coats of white spray paint. I did a very short demo, then let them loose. I was ready for it to get pretty white and wild, but they kept things in check. Two coats and the snowflakes were ready. Thankfully, as it was December 24, after all. Late in the day even.

On the home improvement side of things…

The kids had a surprising amount of patience and focus while working on the snowflakes. Though they usually save that skill for video games and debating whether “infinity” is as high as “infinity + 1”, I also learned there’s another thing they can focus on: making a gingerbread house. It may seem like a simple task but getting the parts of a gingerbread house sized correctly and properly positioned together with icing isn’t as easy as it looks.

Carefully applying the candy so the house doesn’t fall over is also a tall task for candy-hungry kids. It always looks like there’s more than enough candy when it’s sitting in bags, as opposed to what ends up on the house. Strange how that is. Maybe one day my kids will use some of these concepts to build an even more impressive structure, though I’m sure it won’t taste as good as this colourful A-frame did.

Stay tuned, and let me know what you’re up to. 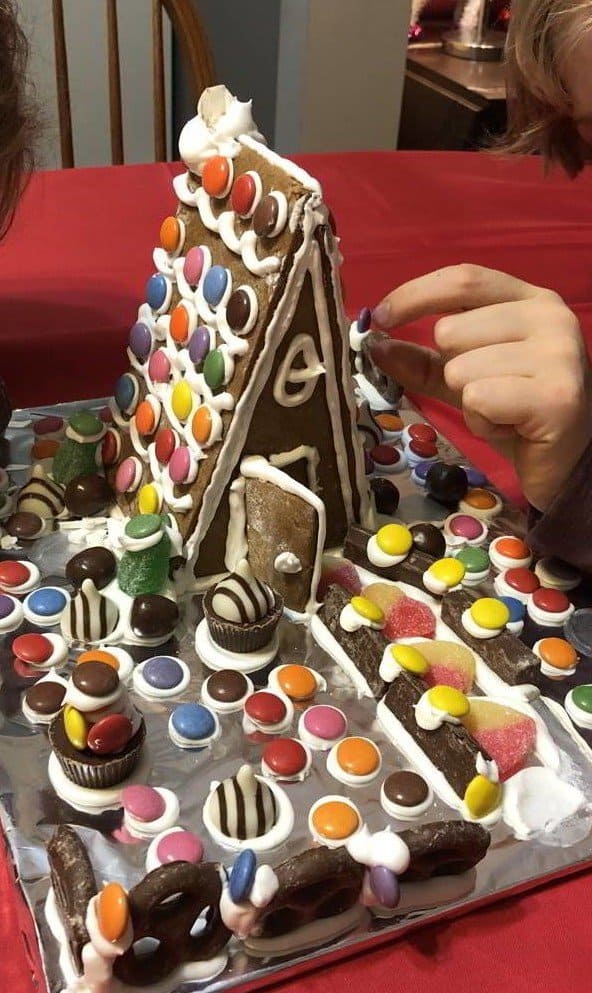