Lost marbles, air cannons and a wooden spoon: Summer fun in the shop 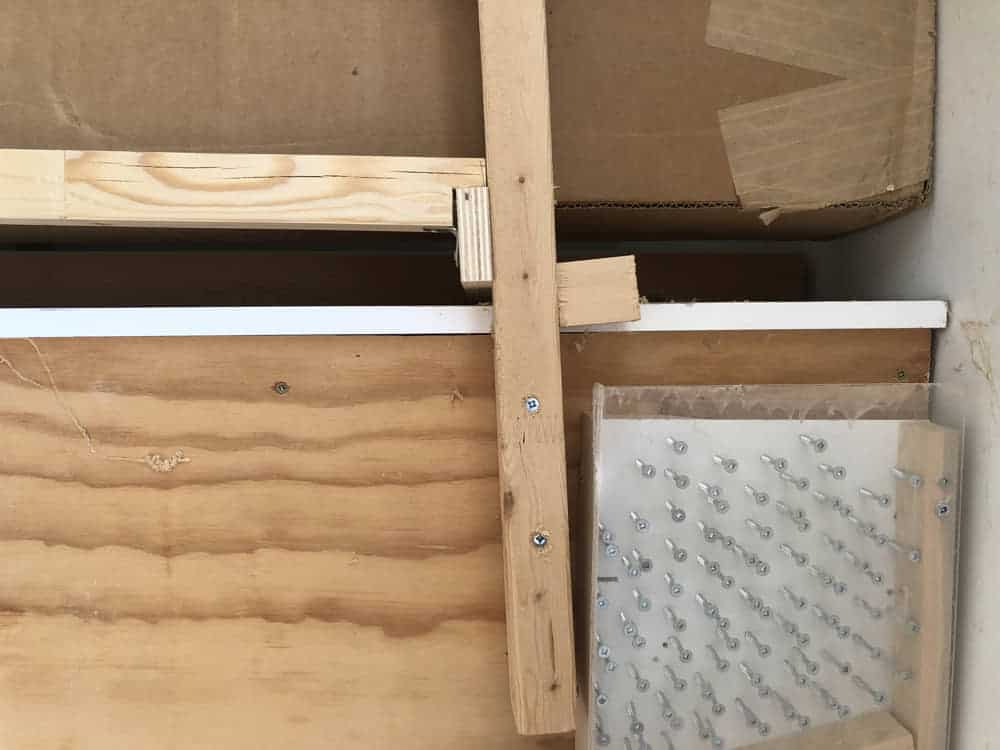 The other day I took my son to the shop to work on our marble run, and maybe even start a wooden spoon he wanted to make for his teacher. It was well into July, and school had been finished for about a month, but since my kids haven’t actually set foot in a school building since March, the last day of school this year had a much different feel to it than usual. I also knew where my son’s teacher lived, so there wouldn’t be a problem getting a gift to her a bit late.

This was the first time we’d looked at the marble run in a month or so. My son set a ball in motion, and to both of our surprise, the ball travelled very slowly. I think it was the extra layer of sticky, fine sawdust on the run, as I’ve been machining a lot of white pine recently. Because a marble relies on momentum as it bounces, rolls and bangs its way down the run, the lack of speed had it acting differently. Part way down the run it bounced off course and rolled behind a million things I had tucked into a dead corner. You know that “dead” corner almost every shop has? That’s the corner I put all the stuff I only use once in a while. Things are packed in there so snugly that I will likely never use any of those tools again. “Oh well, I guess that’s that,” I said, as soon as our only ball disappeared into that mess. I’ll need to invest in another marble.

Next on our list was the spoon. I got out a blank of cherry and tried to coax Jonas into paying attention to what we were doing, but it was impossible. He wanted to try an experiment from his sister’s science class with a compressor and ping pong ball called “Bernoulli’s Principle.” Sure thing, I thought, and turned on the compressor. With a light but steady rush of air from the compressor, the ball was supposed to hover over the tip of the nozzle, and to our surprise that’s exactly what happened.

It was not only fun, but easy for both of us to do. Then came the tricks. How much of an angle could he rotate the nozzle? How softly could he blow the air and still have the ball levitate? What if he interfered with the airflow slightly? Would it lift a tennis ball? After about 15 minutes he had tried every option he could think of with the limited resources we had. I thought it was a good time to work on our spoon.

I tried to refocus my boy on the wooden spoon for his teacher, but he couldn’t get that magic of compressed air out of his mind. “Can I make a cannon?” he asked. “I don’t know; give it a shot,” was my honest answer. He tried a 3″ diameter cardboard shipping tube, but the CFM of air he had at his disposal was too low to make that work. Next, a plastic tube, used for closing off the open end of my vacuum press, caught his eye. It had an inside diameter of 3/4″.

“Now I just need to make a bullet,” he said, eyeing my scrap lumber box. We tried a 3/8″ diameter fluted dowel, but it didn’t work well, because there was too much open air surrounding the dowel. He went back to the scrap box and started to make a pine bullet with a spokeshave and miniature block plane. After a lot of hand work, the bullet fit nicely inside the plastic tube. We cranked up the air pressure on the compressor and he tried it out. It worked pretty well, though he quickly realized that even the tiniest bit of friction between the plastic tube and the bullet caused problems. With a bit more planing, his compressed air cannon shot the bullet about 25′, which made Jonas pretty pleased.

He then started with the tricks again. (I guess that’s just how an inquisitive 10-year-old boy’s mind works). How high could it go? Could it blast over my shop? What angle produced the furthest shot? So many questions.

While the young lad worked on his wooden bullet and perfected his shooting, I did my best to leave him alone, unless he had a question or a problem. I thought I might as well start the spoon for his teacher. I wasn’t going to make it all, but I could at least rough it out on the bandsaw and remove much of the material on the underside of the bowl. This would leave just the finer cuts for Jonas to deal with. It would also allow him to not get bored of spoon carving quickly, and ensure success with yet another shop project. After the bandsaw and the disk sander I forced myself to stop, even though I was having fun. This was supposed to be his project, after all.

We haven’t been back to the shop for a few days, but we still have lots of time to finish the spoon before summer is over. After writing that last sentence I have a feeling some procrastination may be in our future. The moment I have “lots of time left” for a project is when I get lazy and forget about it.

No Momentum
The marble was travelling so slowly down the angled ramp on the left that when it bounced onto the small maple block it rolled sideways onto the railing and back into the abyss. Buying another marble will be easier than finding this one.

Wooden Bullet
My son turned some scrap pine into a bullet that would fit nicely in a plastic tube I use for closing off my vacuum bag. At first, an ever-so-slight friction fit stopped him in his tracks, but a bit more hand planing and the bullet shot nicely. 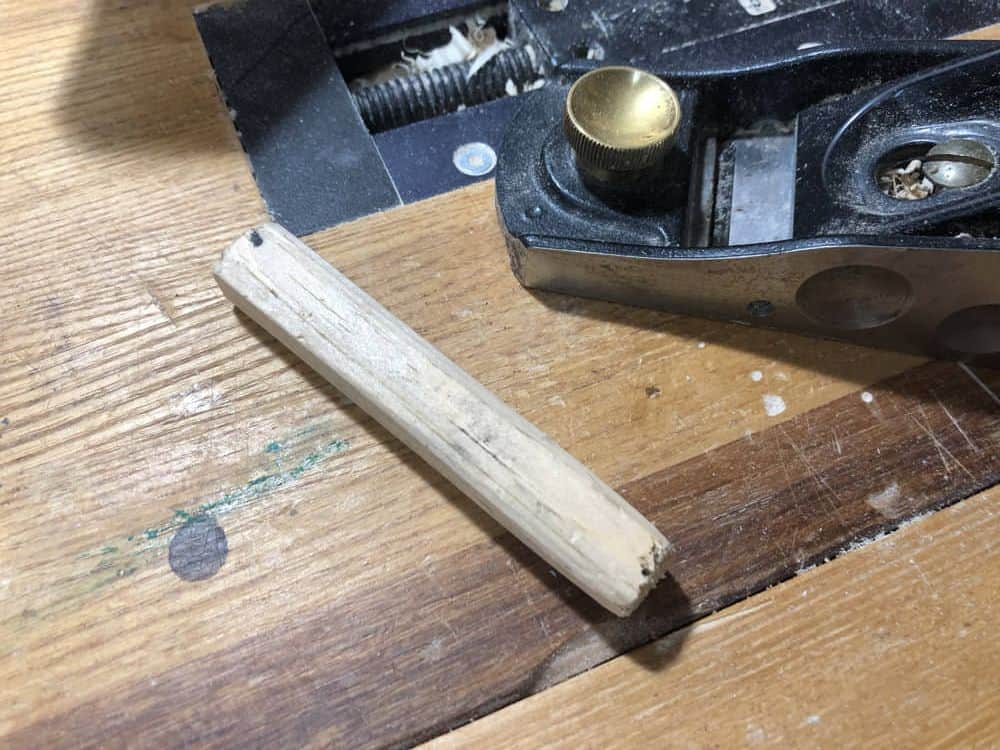 A Good Start
This is where I finished my portion of the spoon for my son’s teacher. He’s got to take it from here. 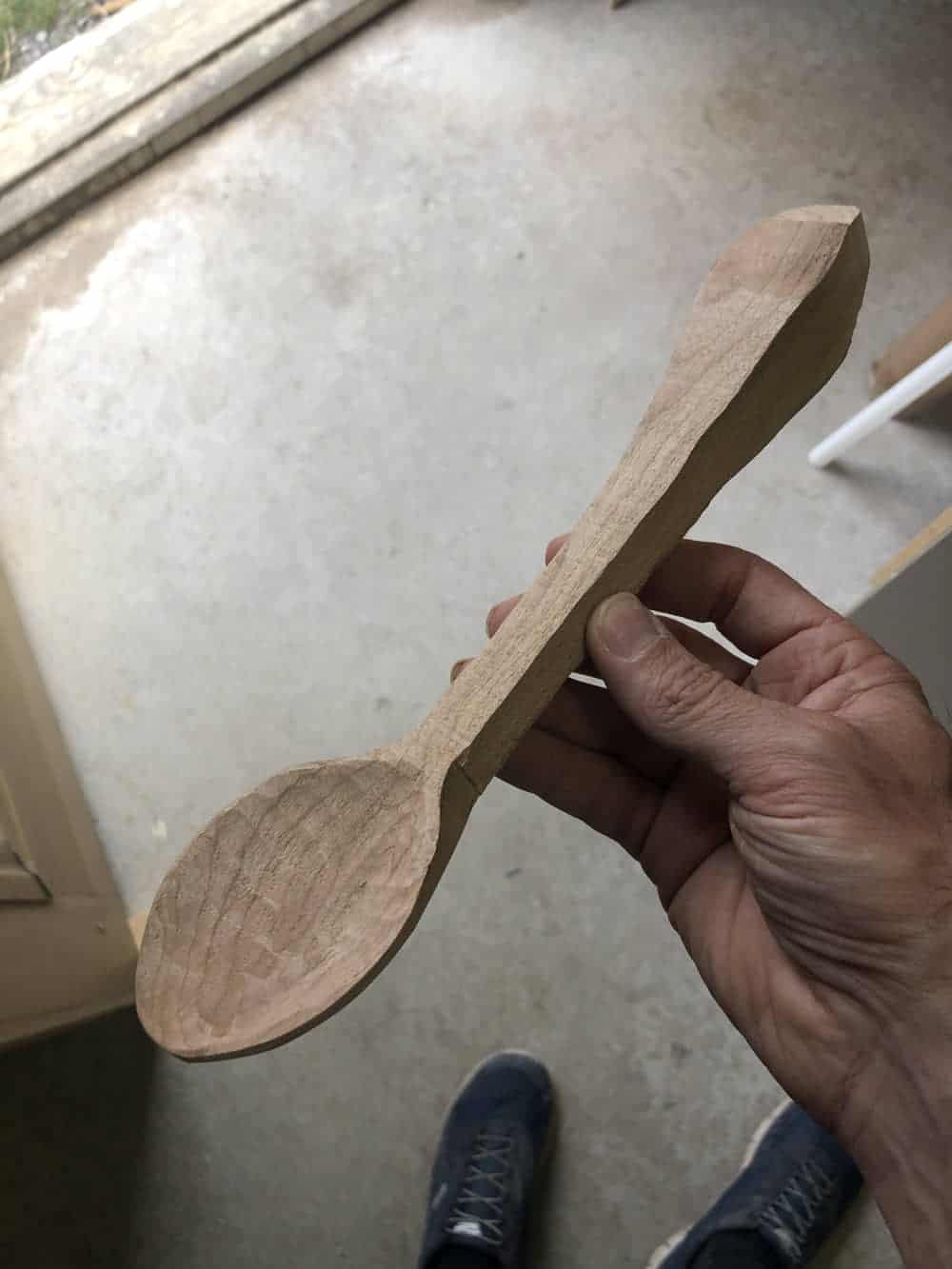