Home From Rob's Bench The myth of the simple deck reno: part 1

The myth of the simple deck reno: part 1 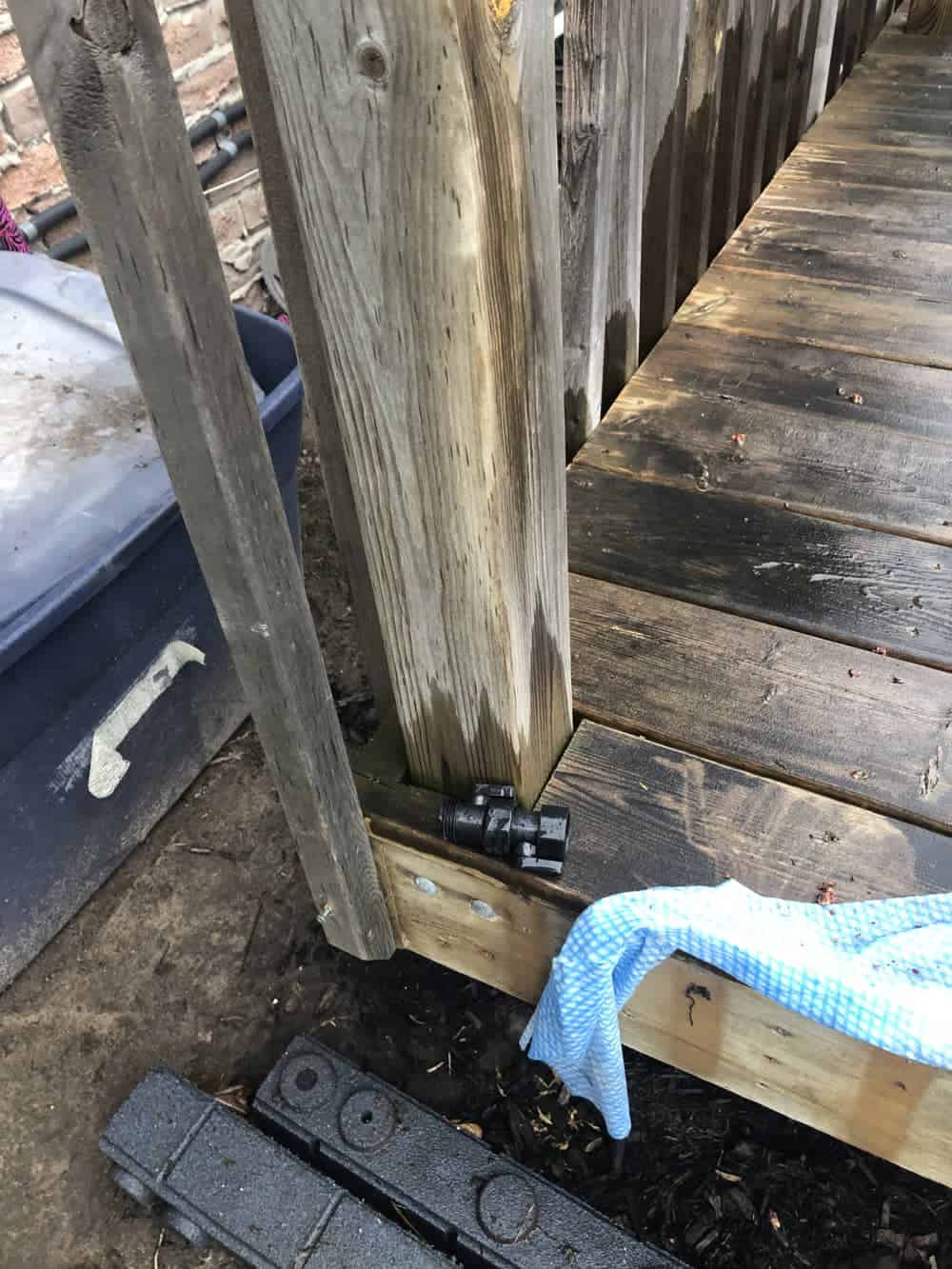 My mother had a small deck built on to her house about six years ago. It should have been made wider and longer, because when the large table and six deck chairs are on it, there’s only room to move around the deck’s perimeter, especially at the two ends, if nobody’s sitting in the chairs. That’s a bit of a problem.

I haven’t made many decks in my life. The last one was when I helped my dad about 30 years ago. This isn’t the type of work I do, even though I have all the tools needed to build a deck and understand how to work with wood. I went to school to learn how to make furniture, not decks. Having said that, I knew finding a contractor to do this tiny job was going to be hard, and the fee wasn’t going to be low. I also figured it would be October by the time they could get to it. “I can do this little job for you — no problem, Mom,” I reassured her.

My plan was to extend the deck by 4′ to give ample room at the ends, and the process was simple. Because of the way the deck was built, extending its dimension in one direction was a cinch. Adding to its width would have been much harder, at least for this rookie. I thought the added room at either end would allow her a bit of room to adjust the table and chairs in a way that would work nicely, and also keep the project simple enough that even a lowly furniture maker like myself could do it.

A day later I was hit in the face with a $650 price tag for essentially 4’x10′ of pressure-treated deck materials. The salesman told me I was lucky to even get this material, as they would likely be out of it sooner or later. I knew this was the case, and since my mom spends a lot of time outside, it was worth it.

Later that day I had unloaded what looked like $200 worth of wood and started to dismantle one end of the deck. I then made a trip to my shop to grab all the tools I’d need, with a few extras just in case. I didn’t want to have to make trips back and forth during the project. This is where I first went wrong, though I didn’t know it yet. I don’t know why I was so conservative in grabbing tools, and I sure as heck don’t know why I thought I’d only need one battery for each of the three drivers and the small recip saw I brought.

My son was keen to help, and I thought this was the perfect opportunity to teach him a bit about dimensional lumber, and the tools and methods used to work with this material. Besides, this was going to go super smoothly, and I wanted him to see the magic happen.

I brought all the tools out and spread them all over the portion of the deck we weren’t touching. We effortlessly removed the end section of railing and a bunch of balusters. Things were going exactly as I knew they would.

Who knew bolts were so tough?

I had to remove a few long bolts so I could move the rim joist and shift the corner posts out 4′. Also no big deal. This is when it started to rain. It sounds stupid, but I never even considered that to be a possibility. I do all my woodworking inside, and water isn’t allowed in the shop. I moved a few things so they didn’t get wet, but most of the tools got a bit of a rinse. The forecast wasn’t for heavy rain, so this would likely blow over.

I immediately realized the end of the bolts were too long to allow my socket set access to the nuts that had to be removed. I also didn’t bring any wrenches. Since I wasn’t going back to the shop (I had already mentally dug my heels in on this stance; a bit of foreshadowing), I found some weird-looking wrench in my mother’s tool box that would likely work. It did, but it was slow going. It was faster than heading to the shop, though.

Got the first nut off and tried to tap the bolt through the corner post. Absolutely no way that thing was going anywhere. Tried a few other things. Nothing. To top it off, I couldn’t get a proper swing with a hammer, as other deck boards and joists were in the way. Removed two deck boards, but still nothing. Okay, reciprocating saw time, which pleased my son. He mainly wanted to know how the motor turned rotational movement into the back-and-forth movement of the blade. When I told him I wasn’t positive, I made the mistake of joking with him that he could take it apart and find out. He immediately reached for an Allan key set, and I had to refocus him on our bolt-cutting task. Dismantling of tools would have to wait.

I was about halfway through the first bolt when the battery died. So silly, as I didn’t bring an extra. Then I had a great idea; my Milwaukee heated sweater had a 12V battery in it and I had it with me. I popped it in. It was dead. More hammering, some weird crowbar action (thankfully nobody got hurt), and a lot of twisting and rotating of the corner post that needed to move all resulted in nothing. Okay, change of plans. The corner posts were staying put. We happily moved on to the next step like this one didn’t really need to be completed.

Still had a problem

Only trouble was the next step was removing the rim joist so we could extend the joists, and one of those troublesome bolts in each corner post needed to be removed. Luckily, I had already cut part way through one of them. Through a wild series of jiggling, rotating and banging, I was able to remove the partially cut bolt from the first corner post. The partially cut threaded bolt eventually broke. The other corner post was next. Writing this now, I can’t even begin to explain how we got that one off, as it was such a blur. I think we tried the old wrench and a series of corner post wiggles, in conjunction with some weird hammer blows. That one long bolt eventually came out, though. I threw it under the existing deck as I was angry with it, and didn’t even want to waste the time tossing it in the garbage.

Now that the rim joist was free from either corner post, it was time to unscrew it from the joist ends. Only problem was that they were nailed on with what turned out to be insanely strong nails that no hammer claw could access. We spent 10 minutes trying to take the first nail out, but were not successful. My mind turned to furniture making for a moment. Forget the typical “Oh, I don’t use nails in my furniture” line I’ve used on countless customers. I was a changed man. Since nails were so strong, I was considering replacing all my mortise and tenon joints with nailed half laps. Anyways…back to the deck.

When I stood back and realized there were about nine joist hangers, I knew this wasn’t going to happen. It was also almost two hours past lunch time, so we walked away from the deck with our heads slung low.

Lunch was the highlight of our day

While we enjoyed a tasty lunch of croissant sandwiches, Cokes and gummy worms, I decided to just cut the end 6″ or so off each joist, freeing up the bomb-proof rim joist. Since these nails and joist hangers were so darn strong, I would just use the new, sistered joist on one side of each existing joist, then at the far end I could attach the new joists to the 6″ piece of joist stuck to the rim joist. This approach was quick, and would leave the rim joist in the perfect location. My circular saw made quick work of the joist ends, and like a caged grizzly bear being released into the Alaskan wilderness, the rim joist hit the ground running.

Back up to speed

It was honestly a surprise to me that dismantling went so slowly. Surely, I was well-prepared for the rest, and things would go smoothly from here on out. The pace picked back up for a while, and my frustration level lowered. We cut some 12′ long lumber in half so we could install lengths beside the old joists. One end would be supported by an existing set of beams, and we’d install a new set of beams to support the other end of the freshly cut pieces. They slid into place with minimal hammer blows and got fastened into place.

The next step was super simple; place the concrete footings down, cut the support columns to length, and install the beams on the sides of the columns to support the new joists. And like I figured it would, this went smoothly. I was back on my game, and impressed my son quite a bit. In hindsight, his enthusiasm was beginning to fade before lunch, but this brought him right back up again.

Just as things were starting to go smoothly, I had to take care of a few magazine tasks. We were in the midst of finalizing our June/July cover, and I noticed a lot of questions coming in from our publisher and art director. It was only 3 p.m. in the afternoon, but I had to stop for the day. Ha, I was right after all. According to my plan we’d be done for the day well before dinner. What I didn’t realize was that we would be back at it the following morning. At least it was starting to look like a new deck, which pleased my son. He proudly said, “I can even walk on the new deck!” as he carefully balanced on the top edges of the few new joists we had put in.

I’ve also got to get this weekly column out, so I opted to rest my aching body in my easy chair while writing it up. Furniture making isn’t as physically demanding as renovating decks, and although I’d been trying to ignore it, the rain was still off and on. Being inside just sounded better.

Just so you know, next week’s column will be short. The rest of this deck reno is going to go smoothly.

Corner Posts
The corner posts gave me a lot of trouble. They didn’t want to move, so I let them stay put, but not until I wasted far too much time on them.

Nuts and Bolts
These long bolts securing the corner posts posed the first serious challenge. Even though I’m well aware of how nuts and bolts work, I spent far too long trying to prove to my son I knew how to remove them. I eventually won the battle, but it wasn’t pretty. 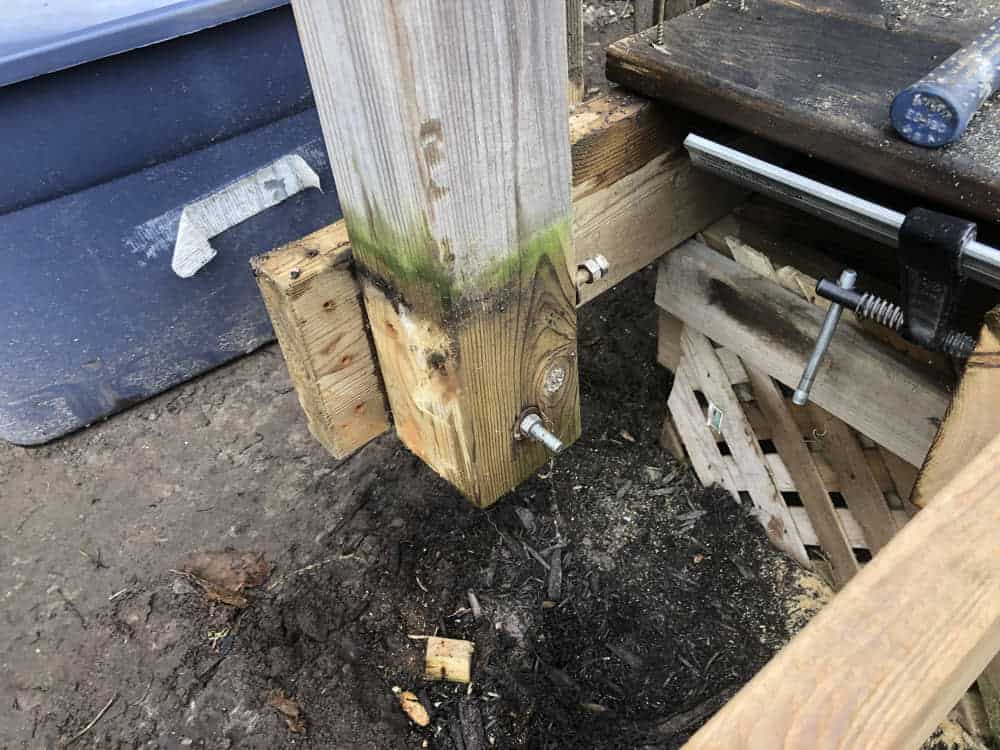 Trouble Makers
Even though I employed a healthy mix of wrenching, cutting, hammering and swearing, I could only remove a few of these 6″ long bolts. 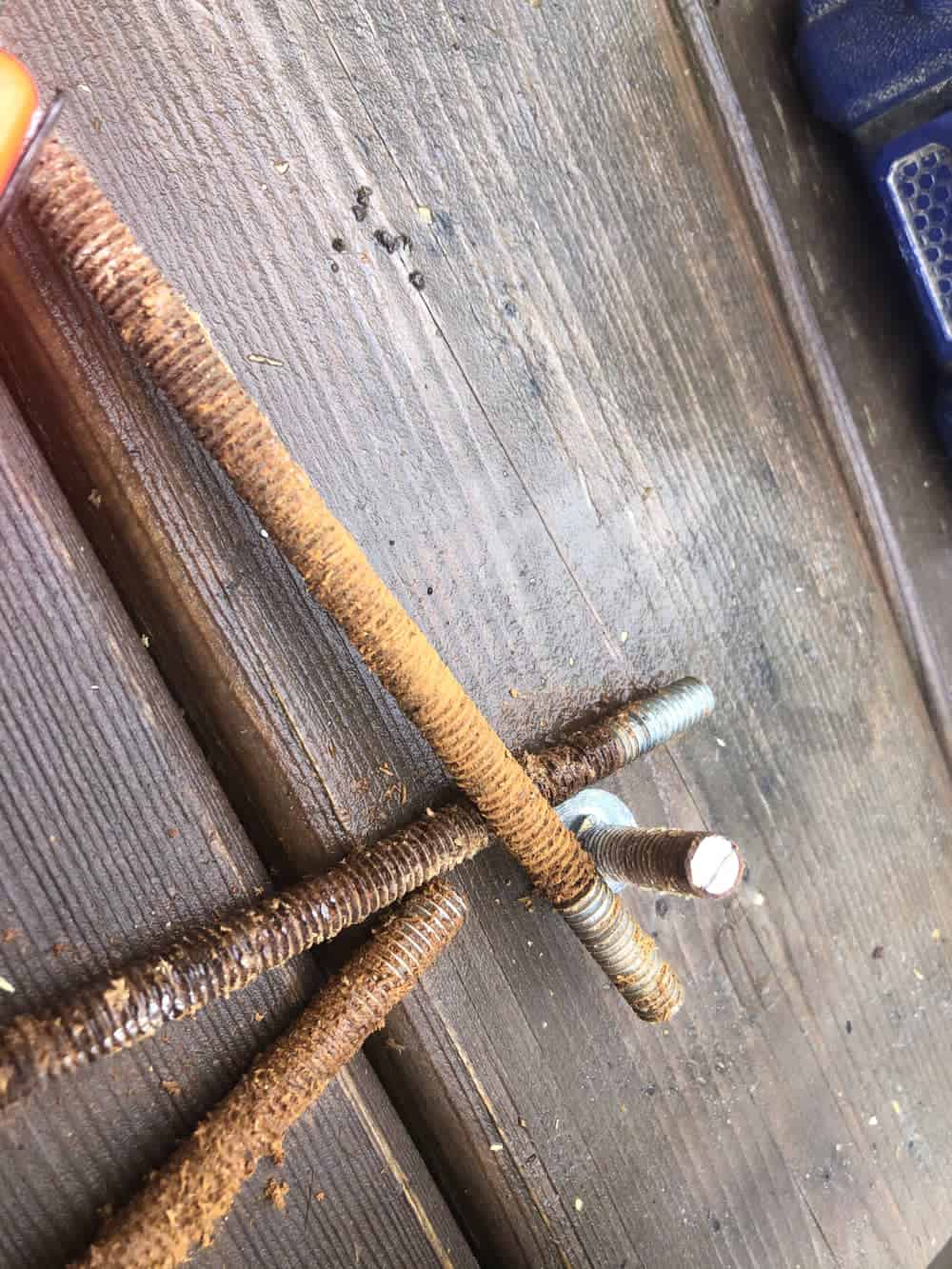 Moving Along Nicely
The corner posts wanted to stay put, so I let them. Next, I got my trusty helper to remove some lattice, as I took a break to calm myself, and regain some composure. Notice those two long bolts on the existing deck; they ended up being tossed under the deck because I didn’t want to give them the satisfaction of being tossed into the garbage. 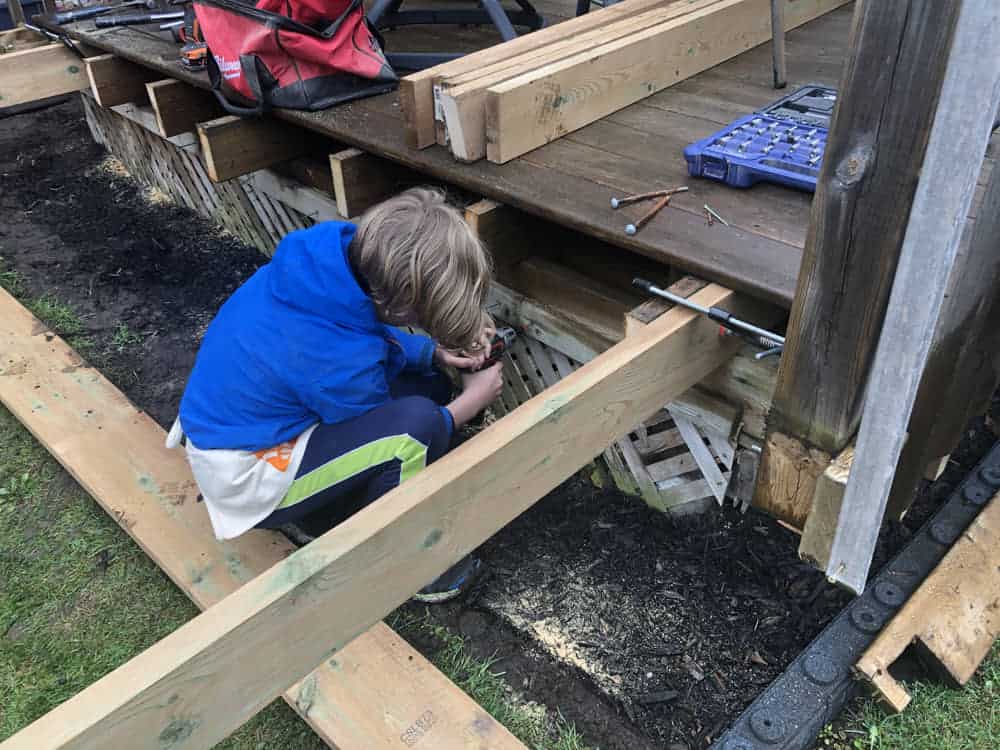