Home From Rob's Bench The myth of the simple deck reno: part 2

The myth of the simple deck reno: part 2 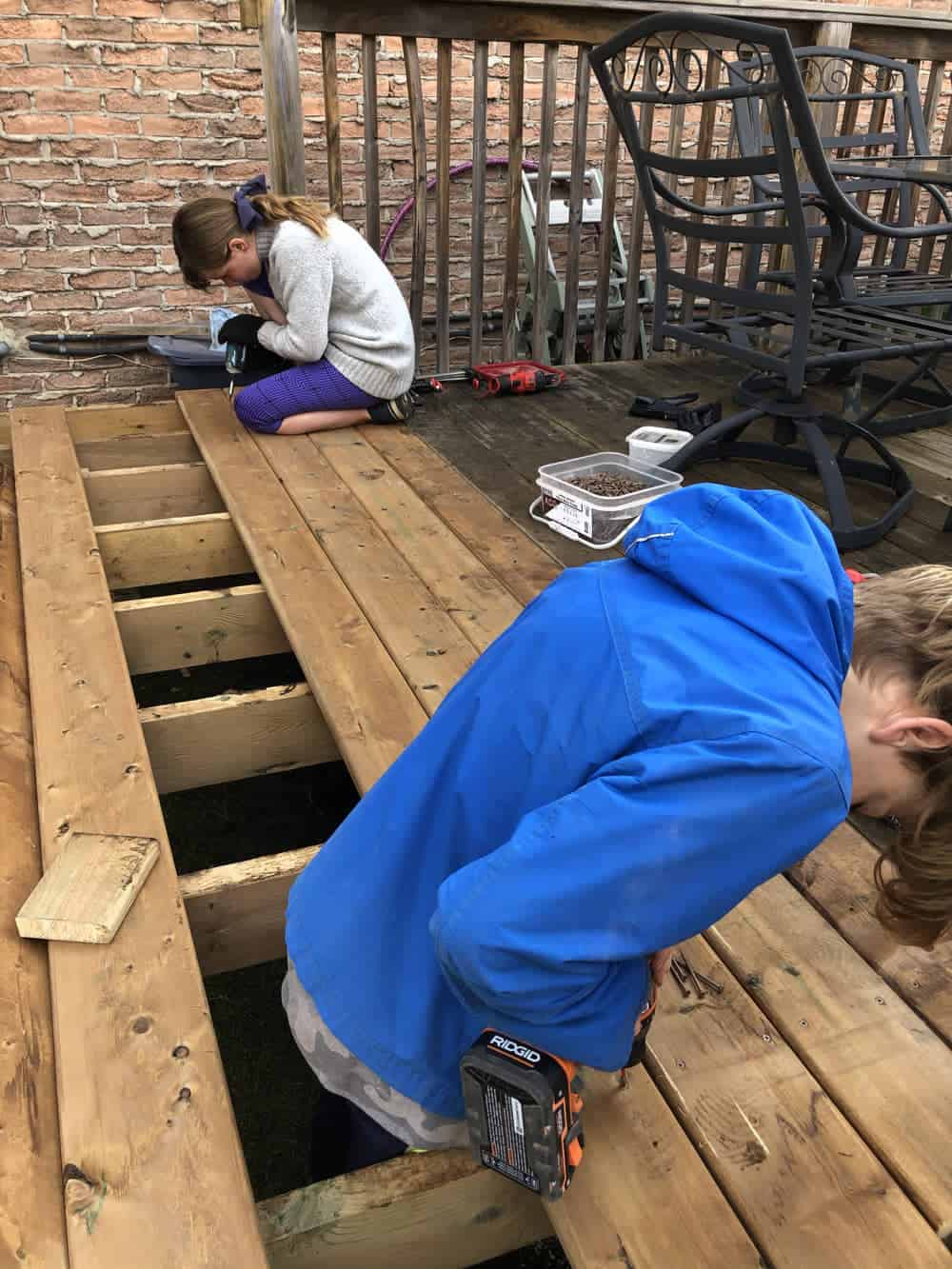 I’m writing this three days after starting what was to be a one-day deck reno, but I may be getting way ahead of myself. Let’s just call this Day 2. We brought the tools out to the deck and opened everything up. Stupid me. We quickly put wet tools away the previous afternoon and forgot to dry things off. Rust was already forming on my socket set and a few other tools. Luckily it was going to be drier, and the sun was even threatening to come out.

I’m writing this three days after starting what was to be a one-day deck reno, but I may be getting way ahead of myself. Let’s just call this Day 2.

We brought the tools out to the deck and opened everything up. Stupid me. We quickly put wet tools away the previous afternoon and forgot to dry things off. Rust was already forming on my socket set and a few other tools. Luckily it was going to be drier, and the sun was even threatening to come out.

With the beams now supporting the new joists I figured we were pretty much done with the basic structural rebuild, and within an hour or two I’d be organizing deck chairs on the new, spacious seating area. We lined up the old rim joist and I realized the existing joist hangers were going to interfere with attaching the rim joist to the ends of the new joists. I decided to notch the ends of the joists to fit around the hangers.

The first series of cuts I made with my circular saw went great; 1/2″ deep cuts about 1-1/2″ in from the ends of the joists. I then needed to cut into the end grain of the joists about 1-1/2″ to remove the material. The first six cuts went great as well, then my battery died. And as I mentioned last week, I “knew” I wouldn’t need more than one battery for each cordless tool so I didn’t bring any extras. Would it be faster to head to the shop and grab a battery, or just use my foldable Japanese hand saw to make these last three cuts? Hand saw it is, as I didn’t want to waste the driving time.

Head to the shop? Nah

Japanese hand saws are great at a lot of things, but the specific saw I had on hand wasn’t great at ripping soaking wet softwood. It took me 15 minutes to make those three small cuts, but I managed. Afterwards I realized it probably would have been faster to head to the shop to grab the extra battery, but I was done now, and I likely wouldn’t need to cut much else.

We positioned the rim joist in place, secured it to the joists and moved on to the next stage — lag bolting the 4x4x8 corner posts in place. This went well, and was done in no time. Next step also was easy — re-fastening the existing railing and balusters. Just like that, I was done.

I then needed to cut a few pieces of 2×4 to length to extend the railing. Now I’m really starting to wish I had grabbed that circular saw battery. Only two small cuts, so no biggie with the hand saw. It went well, though much slower than a Japanese saw typically cuts.

Just to show you how little forethought I had, the next step was to cut the top surfaces of the hand rails to fit around the 4×4 corner posts. Another job for a hand saw, I guess. The spine on the back of the saw made it a bit tricky, but I was able to make the cuts in about 10 minutes or so, and screw the two boards in place on either side of the deck. To add to my frustration, once I laid the cuts out on the board, then made them, the parts didn’t quite fit right, so I had to recut a few of the boards.

Home stretch now. I put the deck boards in place and asked my son to screw them all down. By this time my daughter came out to help, which was great. As soon as I put the first one down, I realized they would have to be shortened by about 1/2″ to fit between the balusters on either side of the deck. Again, a little frustrating, but my Japanese hand saw would excel at this sort of thing. A couple of these deck boards also needed to be notched to fit around the existing and new 4×4 posts. I was in so deep now I didn’t even consider heading to the shop to grab another battery for my circular saw. I hand cut them all to length in twice the time it would have taken me to drive to the shop to retrieve that battery, then my kids drove in about 100 screws to secure the deck boards in place.

We teamed up, all taking on a different role, to screw the balusters in place. I first marked lines where they were to be positioned. Next, my daughter aligned the balusters while I screwed in the tops. Finally, my son drove in the lower screws to complete each one. We repeated this about 20 times until they were all installed. When the going is good, it’s a lot of fun.

We had spent much of the day working on this deck, and instead of finishing it off that night in a rush, I opted to put the tools away for another day while I regained some strength.

I wanted to add some shade to this deck, so I decided to make the corner posts 8′ high, and install a sun shade. The new section of deck was easy, as I just installed tall corner posts. The other two corners weren’t otherwise being changed, so I had to figure what the best approach was.

I likely should have removed the existing corner posts, and replaced them with these two new ones, but I was honestly sick of this project, and wanted it done quickly. I installed the taller posts beside the existing posts, notched the railing and deck boards to accept the new posts, and bolted them together. This also turned out to be quite the task. The bolts I had were removed from the existing deck, and were only 6″ long. The lag bolts I had were only 4″ long. I used the old bolts (I now wish I saved the extra few I had angrily tossed under the deck in Day 1) and bored a recessed hole in both sides of where it would be located to allow the washers and nuts to fit onto the bolts. The simple solution was to head to the local hardware store, but it was closed due to the provincial lockdown. An order would have taken days to make it into my hands, and I just wanted this done.

After switching different sizes of spade bits what seemed like a million times in the only drill that had power, I had the holes necessary to fasten the two corner posts together. I used a few 2-1/2″ long deck screws to fasten the tall post to the railing and inserted the long bolt, only to realize the clearance holes I drilled were about 1/8″ too shallow. I removed both posts, drilled them out a bit deeper, and was just about ready to toss all my tools into the neighbor’s yard. It was at this time I also realized I didn’t have enough washers to install these bolts properly. I guess I tossed them under the deck with the bolts. I searched the area, but to no avail.

The posts got fixed into place, although when the hardware store opens up in a month, I’ll grab a few 6″ lag bolts to make sure those tall corner posts stay where they are.

Thankfully the sun was out for much of the day, but that only meant I got a sunburn. At least the tools didn’t accumulate any more rust.

While we were out there working on the deck there seemed to be at least a dozen times that little things went wrong. A drill (the only drill remaining with a working battery) wouldn’t accept a drill bit I wanted to use because the bit wasn’t a 1/4″ hex bit. The screws we used were either slightly too short or too long for a specific task. A wrench just didn’t work very well. These little things kept happening. It was frustrating. Progress was slow because we didn’t have the right tools, but we had something that was a so-so replacement tool. It all eventually worked, but if I had to do it again, I would surely bring twice the tools to the job site and take a long-term approach to going to the shop to get another tool when needed.

A few days later my sun shade arrived. It looked great, and for some reason it went up with very little fuss. It was really weird. I bored a few holes for the large screw eyes towards the tops of the 8′ high 4x4s, screwed them in, tied the four corners of the shade up and stood back and wondered what the heck was going to go wrong. Turned out nothing. Sweet.

As we put the tools away on the last day, I saw my son looking thoughtfully at the recip saw, like he was again thinking of taking it apart. I smiled, then quickly hid my Allan key set. Another simple job I can cross off the list.

Another Helping Hand
Part way through the second day my daughter came out to help us out. I think she was mainly wondering what the heck was taking my son and I so long. She attached deck boards, and learned a bit about using a cordless driver.

Lots of Cuts
Deck boards are easy to screw down, but whether it’s a deck board, part of the railing or another part, many of the parts need to be cut to length or notched to fit around another part. This was hard with only a hand saw. 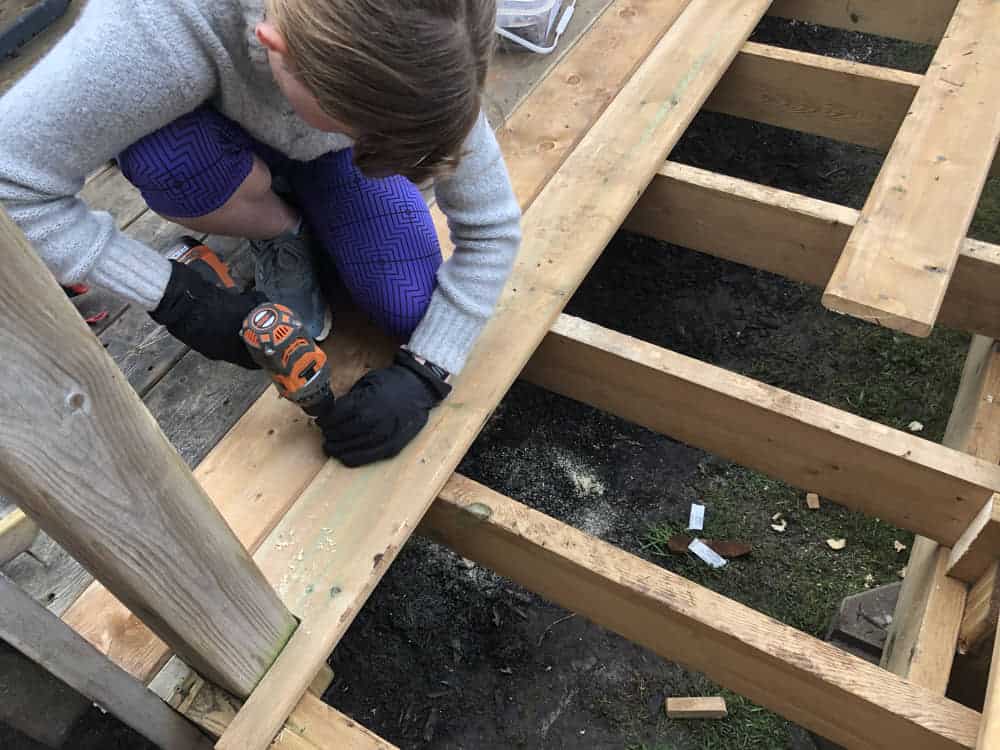 Only One Saw
In hindsight, it was pretty silly of me to refuse to head to my shop to grab a bunch of tools. This hand saw got me out of many tight spots, but it sure did so slowly. 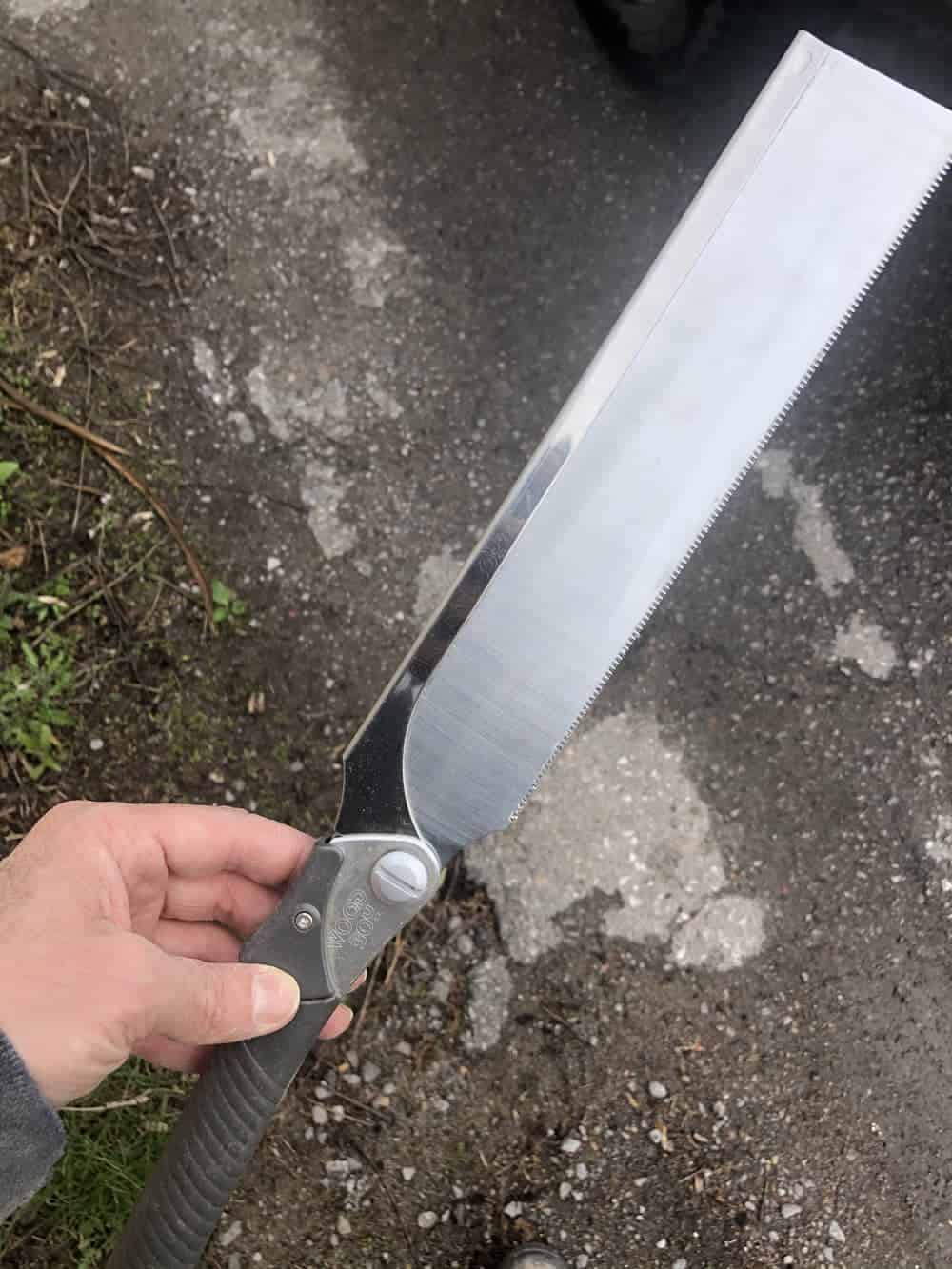 Teamwork
We each had one job to do in order to secure the balusters in place. When the going was good the reno was really enjoyable. It was the unforeseen roadblocks that really slowed us down. 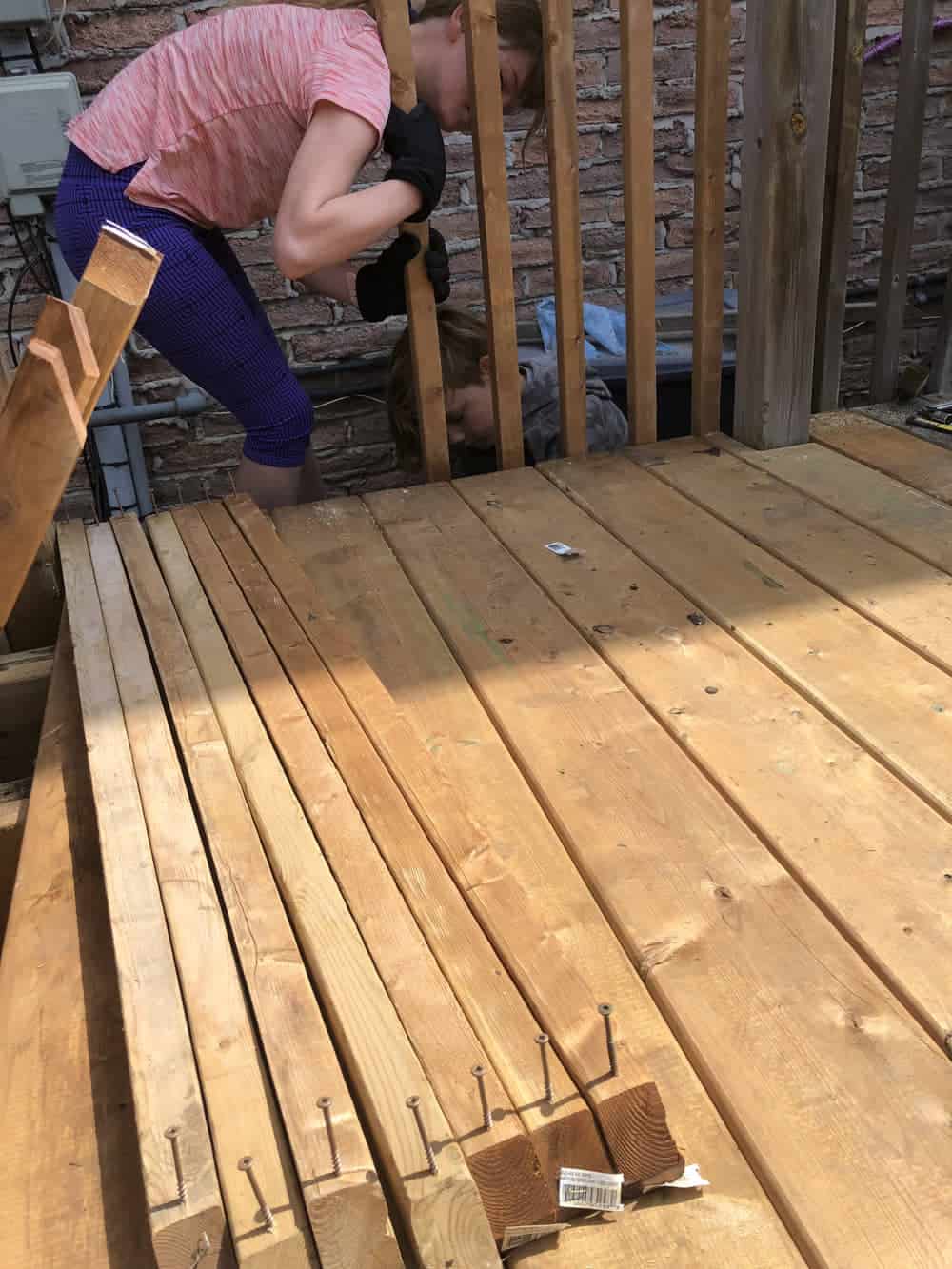