Home From Rob's Bench The world’s most amazing marble machine

The world’s most amazing marble machine 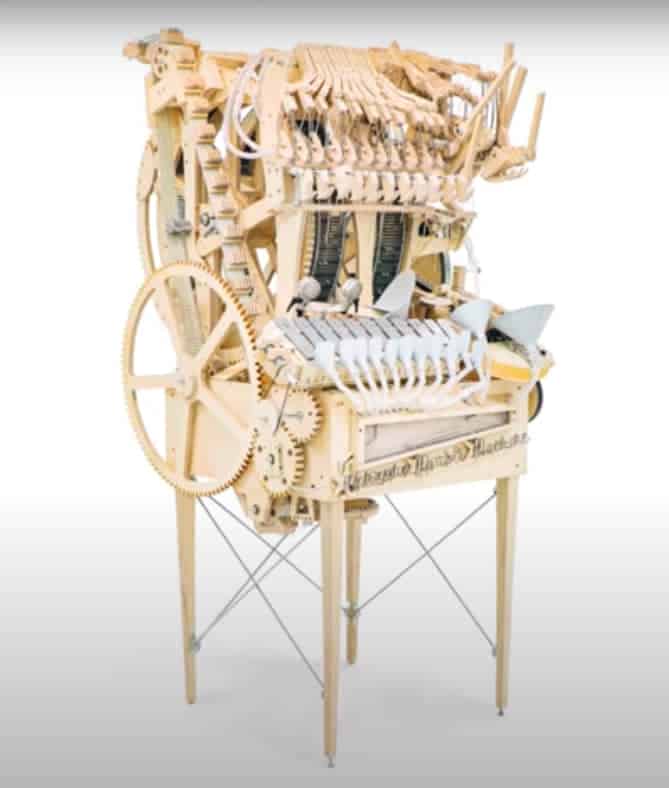 While surfing the Internet I came across a stunning video of a Swedish musician who’s made a machine that plays music. I’m not talking about the latest iPhone or stereo system here. I’m talking about a completely homemade machine powered by the maker, who can also program it to play a wide range of sounds that make up songs.

Once I showed my nine-year-old son, both our jaws dropped as we silently watched this mesmerizing video. Neither of us are musicians, but we both enjoyed the behind-the-scenes look at how this machine works. It’s rare for a nine-year-old to remain speechless for longer than a few minutes, but that was the case during this 11-minute video. We spent about 90 minutes going down a “Marble Machine” rabbit hole, and if it hadn’t already been a half hour past his bedtime we’d have continued even further. At one point he turned to me to ask, “Do you like this, too?” Stunned at the question, all I could get out was a short, “Yeah, this is awesome,” and we went back to watching.

Think of it like a large music box, with tabs on a rotating cylinder that pluck metal prongs to make a sound, but much more complex. And likely close to 10 feet tall. And with the ability to change what sounds you hear and when they’re played. And mostly made of plywood, of course, or this story wouldn’t fit nicely into my weekly woodworking column.

Martin Molin, from the band Wintergatan, has designed and made this “Marble Machine” and if you’re into engineering at all you’ve got to see it in action. It uses marbles, as well as a host of other bits and pieces, to make the sounds. LEGO parts even play a large role in allowing the machine to be programmed to play different songs, as these small pieces act like the tabs in classic music boxes you’re probably familiar with.

While Molin turns a small wheel to make the whole machine work, it’s mainly a collection of plywood gears, paddles, levers and other moving parts that make the magic happen. Of all these parts, it’s the series of plywood gears forming the foundation for the machine that are the most fascinating. Molin even mentions Canadian engineering whiz Matthias Wandel (WoodGears.ca) when talking about how the gears were designed and made. Now there’s another rabbit hole to get lost in.

For me, the engineering aspect is astounding. Molin is a genius, who marries so many different skills in making this phenomenal instrument. If you gave me plans to make this contraption, there’s a half decent chance I could probably do it. But without plans, or even a picture of the final project, I would never in a million years be able to come close to making this instrument. And to top it all off, the songs he’s making sound really great.

Once you’ve seen the first few videos, and understand the basics of how Molin created this instrument, watch the other videos he’s put together to get an understanding of how incredibly complex it is and how finicky it was to dial in to get not only consistent, but great, sound out of it. His ability to fine-tune the machine to work with physics, all the while making quality music, will blow your mind.

Safe to say this thing is even more amazing than the marble run my son and I have been (very sporadically) working on for the past few months. Guess we should get back on that, even though you’re not going to be as impressed with our final project as you will be with Molin’s.

Marble Machine
Martin Molin, a Swedish musician, designed and made this “Marble Machine” that can be programmed to play music. The amount of engineering that went into designing this instrument is incredible.

Gear Talk
A discussion surrounding the plywood gears that form the foundation of the moving parts starts around the 5:00 mark of the video. 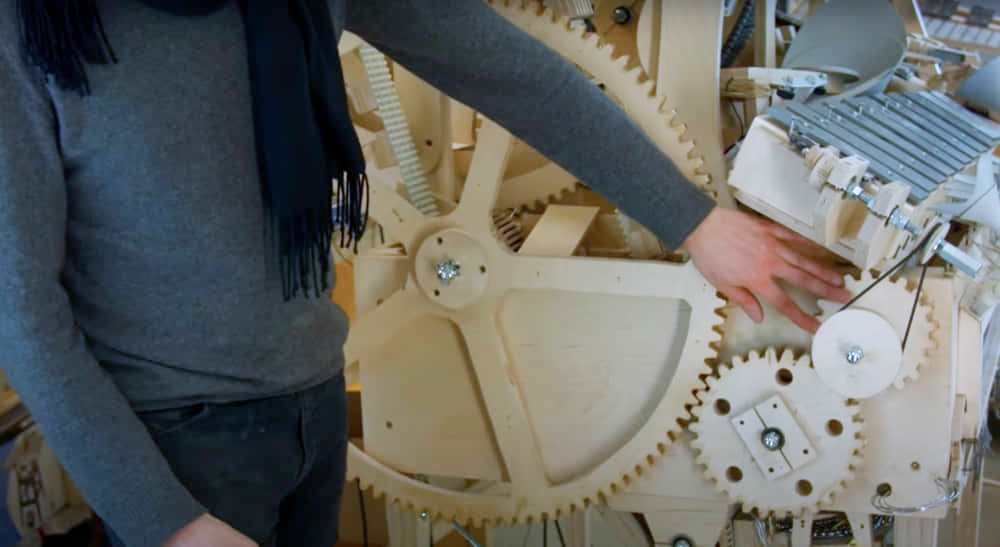 Programming Wheel
Molin is pointing to one of the 64 sectors on what he calls the programming wheel. Every time he rotates the main driving wheel with his hand 64 times, this programming wheel rotates once. This forms the driving force behind the entire machine. 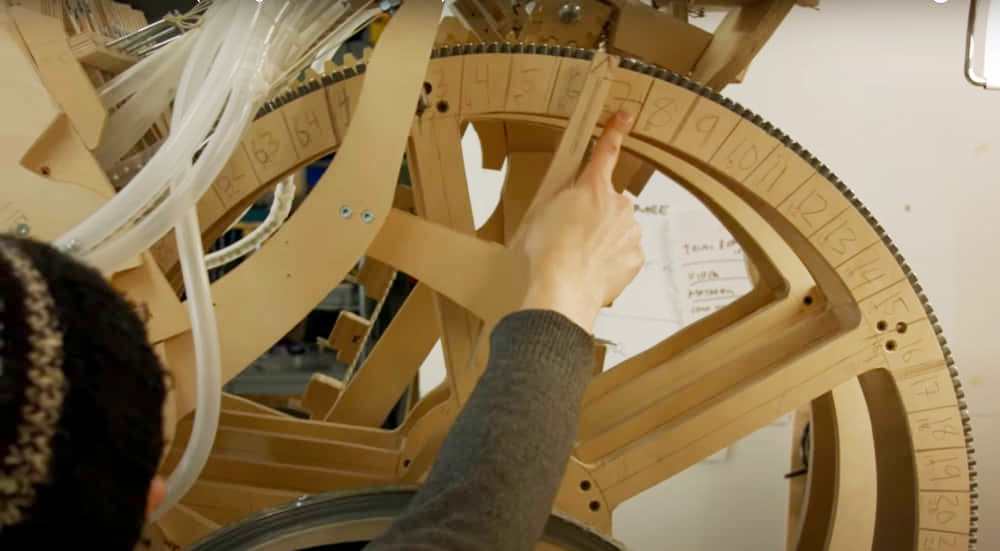 Plywood Gears
Using the gear generator from Canadian Matthias Wandel’s website, Molin created the plywood gear wheels. Once printed on many sheets of paper, he transfers the patterns to plywood and cuts gears, both large and small, into the plywood. Molin covers this at around the 7:30 mark of the video 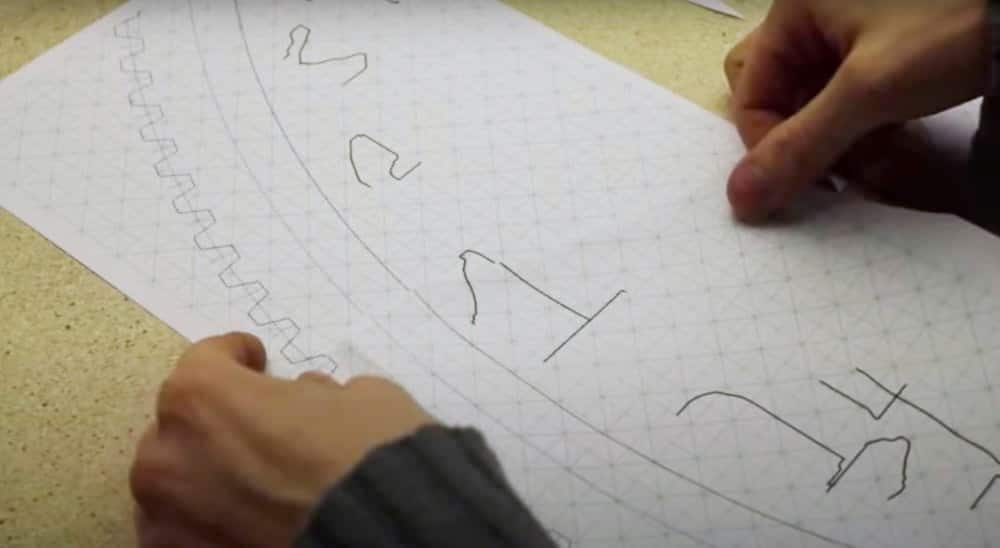 A refreshing (wooden) treat and how can a dead tree grow?
Read more