Furniture maker Andrew Hunter on on woodworking books, the Internet and the smell of zebrawood.

Maker: Andrew Hunter
Age: 29
Business: Halibut Woodworking
Website: halibutwoodworking.com
Shop: 800 sq. ft.
Profiled: April May 2021
Location: Stratford, Ontario
Education: I earned a degree in cabinet and furniture making from Algonquin College in 2012. After graduating I worked for Robert Akroyd in his Toronto studio for about a year and a half.

Q & A with Andrew Hunter

How long have you been building furniture?
Professionally for about six years, and on my own for four.
What sort of furniture do you specialize in?
I love to make all kinds of furniture.
Tell us a couple interesting things about your personal life.
I have been playing music since I was very young and really love to play drums, guitar and bass and I sing pretty terri­bly. I’m also a new father.
If you weren’t a furniture maker what would you be?
I think about this fairly often and still have no idea. All I think about is furniture.
In order, what are the three most important items in your shop apron?
I don’t think anything is more important than my mechanical pencil, a 6″ ruler and a square.
Do you prefer hand tools or power tools?
I prefer power tools. My chisels are certainly my most used hand tools, and only a few times a month do I use my hand planes. I like the consistency and reliability of power tools and I wasn’t taught much hand tool use after school, so I don’t make much time for it.
Solid wood or veneer?
I work likely 90% in solid wood, but I love the consistency of veneer. I would like to get a vacuum press one day and start sawing my own veneers.
Figured wood or straight grain?
I prefer straight grain, both for workability and because sometimes heavily figured wood is too loud for my taste. I work primarily with wood, but think more about the piece and its shape and colour than I do wood textures. That being said, I definitely select my boards carefully and take time with board layout and matching.
Inherited Vintage Stanley Sweetheart or fresh-out-of-the-box Veritas?
I have the best of both worlds! I inherited fairly fresh Veritas planes from my dad.
Flowing curves or geometric shapes?
Both are groovy! As for my own work, I think I use more geometric shapes.
Favourite wood?
I like white oak with a light finish. You can’t beat a classic!
Least favourite wood?
Though I use mostly domestic hardwoods, I worked in zebrawood once and found that sometimes boards smelled almost chocolate-y, but that other boards smelled like a wet horse when cut. I still think about that smell sometimes.

Walnut Dresser
When designing the two upper drawer fronts, Hunter initially experimented with matching a solid piece that had the handle cut into it. This was a disaster, but shortly after, while he was on vacation, a pipe burst in his shop, ruining those parts. This turned out well in the end, because the updated version has a nice grain match and an integrated pull on the back of the lower edges of the upper drawer fronts. Hunter also had to cut the legs down about 2" due to the water damage and is now much happier with their height. 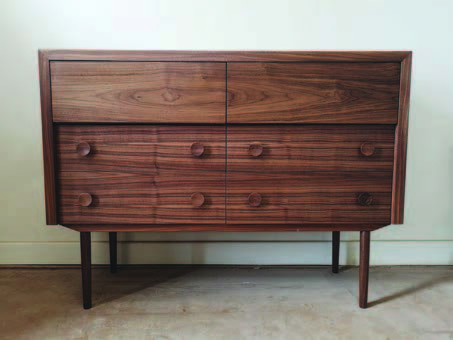 Tambour Door Cabinet
This was the first time Hunter used tambour doors in a piece, and he did a lot of research before building them. What you see is actually the second set of tambour doors, because he cut the first pair to size in a sled and didn’t account for the 3/4" piece that positioned the strips evenly during glue-up. The first set of doors ended up 3/4" too short. The second set turned out nicer than the first set, because Hunter took more time to match the strips for colour and grain. 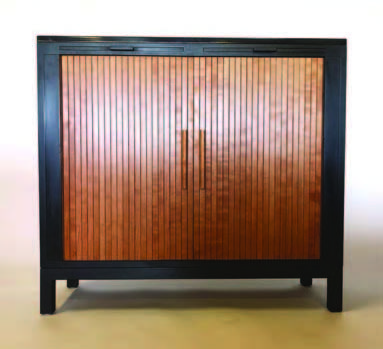 In addition to my studio I spent time last year with two friends renovat­ing a very old hotel lobby in downtown Stratford into a retail space. I now have some pieces on display there.

I like laying out and cutting joinery, but lately I just reach for the Domino mostly.

Books profiling designers like Borge Mogensen or George Nakashima are great. Recently I got the Vitra Design Museum’s Atlas of Furniture Design and I think that’s just about all you need. It’s so incredible.

If something is going to be tricky, I make layout sticks and sometimes full-scale drawings on plywood, especially for chairs.

Make sure you’re making sturdy, dura­ble furniture. Make it as reliable and permanent as you can, and then try to make it as beautiful as you can. Then, try to make the next one better.

I think there are a lot of young people woodworking. I think so long as there’s wood, there will be people making nice furniture out of wood.
I don’t place as high a value on my time as I likely should. I’m sure I’ll figure it out one day.

In Canada there are so many great peo­ple making some of the best furniture around, likely in the world. I really like my old boss Robert Akroyd’s work, Heidi Earnshaw makes incredible furniture, The Woodshop on Fogo Island, Kastella in Montreal and all of what mjolk sells.

Internationally there are so many great makers. I like all of the great Danes so much, great Japanese makers, lots of peo­ple in Brazil making great furniture, so many in Australia, Neri and Hu.

My dad always had a woodshop for hobby purposes, and almost 10 years ago I signed up for college on a whim. It might have been luck, but it’s been a real passion of mine ever since.

When I’m building furniture for myself or as gifts, I like to build without much more than an idea.

I caught a lot of breaks and I live in a very tight community that responds well to people working creatively.
Making furniture seems like it’s becoming more than just a boys’ club and that’s nice to see in any industry. I think most of the fur­niture I like is more often than not made by people who don’t fit the bill of the typical woodworker.

I think I’ve been my own boss for so long that I’m not sure I could have a boss any­more. It’s become the only thing I think I can do!

I think Canada is becoming more welcom­ing for makers. Having said that, I know Toronto has had a lot of its great makers pack up and move in the last few years, so we’ll see what happens when people are far­ther away from the wealth bubble.

I think often about how greatly the Internet has connected and contributed to so many people making such great furniture. I can spend all day looking at new stuff being built all around the globe and feel like I’m contrib­uting to the big picture of craft.