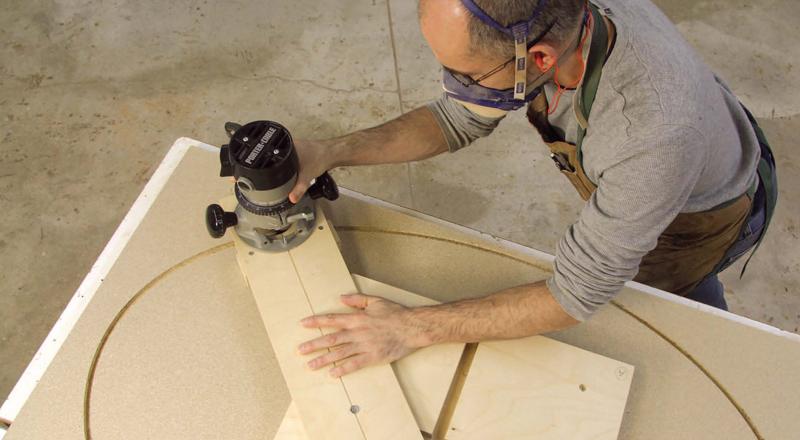 An ellipse is fairly easy to make, and looks very impressive. All you need is an accurate jig. 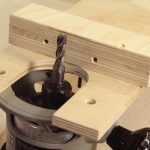 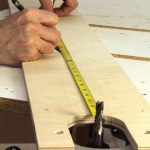 In reality, there are two jigs used to cut an ellipse: the ellipse jig and a very simple circle jig. To make the circle jig, cut a piece of 1/2″ plywood to 6″ x 48″ and drill the appropriate holes in it to attach your router to one end, so the router is centered on the jigs’ width. Remove the material under the center of the router so the bit can protrude through the jig. A 1/16″ deep groove, cut on the table saw, will assist in attaching the center of the circle jig accurately to the ellipse jig.

Determine what general size of ellipse you want to make, as one size jig can’t cut all sizes of ellipses. I was aiming for anything from a small coffee table to a small dining table when I built this 18″ x 18″ jig. If you want to make smaller ellipses, you might want to take about 6″ or more off both dimensions. Alternatively, you can make the jig larger if you have a conference table in your sights. The circle jig will also have to be sized accordingly.

No Slop
The two 5" long sliders should be machined to fit in the grooves with no sideways movement at all, so the path of the router will be smooth and even. The holes to attach the circle jig to the ellipse jig are in the center of the sliders so the shape and positioning of the ellipse will be accurate. 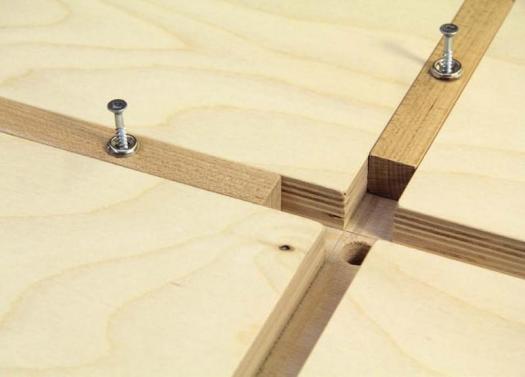 Locate Two Holes
Measuring from the inside edge of the router bit, mark on the circle cutting jig where the two holes need to be located. Drill undersized holes so the screws hold the jig in position precisely. 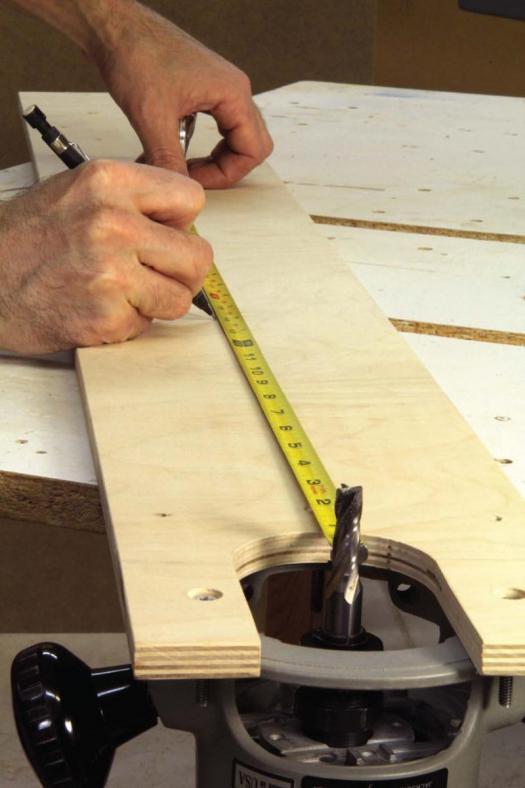 Even Things Out
Attach a block the exact same thickness as the ellipse jig to the underside of the circle jig so the router bit remains perpendicular to the workpiece. 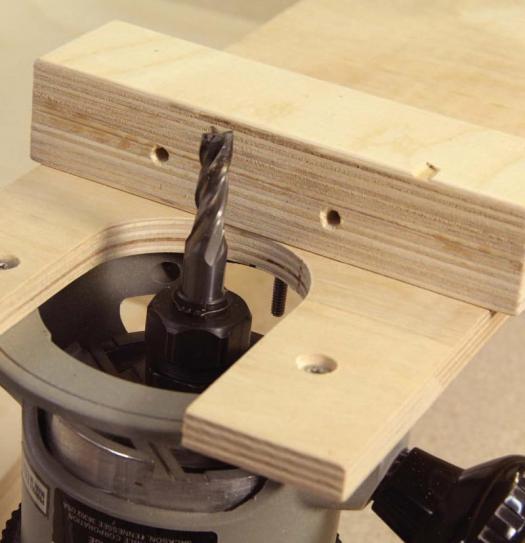 Laminate two pieces of 3/4″ plywood together so you have a blank about 20″ x 22″. You will get the jig out of this blank, plus a 2″ x 6″ leveller strip, which we’ll discus later. Trim the jig square and to finished dimensions. Machine two 3/4″ deep grooves, either with a dado stack in your table saw or a straight bit in your router. The grooves should be at right angles to each other and intersect near the center of the jig. Drill a 1/2″ diameter hole where the grooves intersect so the jig can be centered over future workpieces easily. Machine a 15″ long strip of hardwood to the exact width of the groove; it’s very important there is no slop whatsoever. Cut this strip about 1/16″ less than the depth of the groove so any wood chips will not interfere with the strip sliding in the groove during use. Cut two 5″ sliders from the hardwood strip, making sure to not include any planer snipe or other imperfections. Ease the edges of these hardwood sliders, as well as the jig, and apply a light coat of wax to reduce friction between the moving surfaces. Drill a small hole in the center of each 5″ slider. The circle jig will be attached to the sliders via these holes.

To determine where to attach the two sliders to the circle jig, you need to do some math. Don’t worry, you likely won’t even need a calculator for this equation. Once you have the overall width and length of the ellipse, divide both those measurements in half. Those two measurements are the distances that the screws need to be installed away from the close side of the router bit. For instance, if the finished ellipse will be 40″ x 30″ then one slider needs to be attached to the circle jig 20″ from the inside of the bit, and the other needs to be 15″ from the bit.

Position the ellipse jig over the center of the workpiece by sighting through the 1/2″ hole. Use either screws or double-sided tape to secure the jig in place. Your choice depends on whether the surface is finished. With your sliders attached to the circle jig, place the sliders into the grooves in the ellipse jig.

With a long straight or spiral bit chucked in your router (I usually use a 3/8″ dia. bit), double-check to see if the path of the bit will cut where you’re hoping. Turn the router on and make numerous light passes. I often make the first pass then remove the workpiece and cut the majority of the waste off with my bandsaw. To ensure the jig goes back on the workpiece the same way, I marked the jig with an “A” and the workpiece similarly. Removing the jig is really only practical when the jig is screwed to the workpiece, as the screws will reattach the jig precisely.

After I reposition the jig on the workpiece, the final few passes with the router are much easier and crisper, as I’m not removing much material. Key Holder
Give anybody a knife and... Build a Mitre Crosscut Sled
This simple sled provides a... Coat hanger mirror
If you have ever rushed... Build a Walnut Sideboard
This walnut sideboard has a... 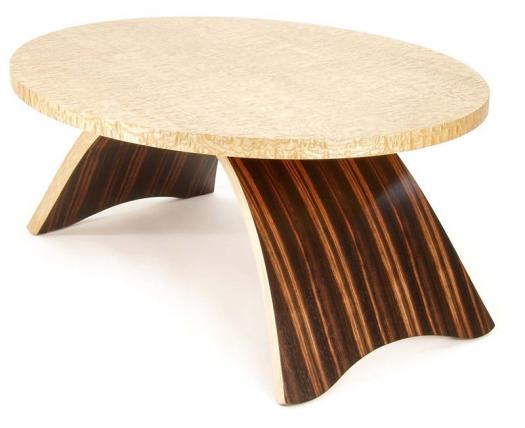