This library table, based on a Gustav Stickley design, is made of quarter-sawn white oak. 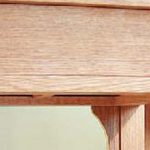 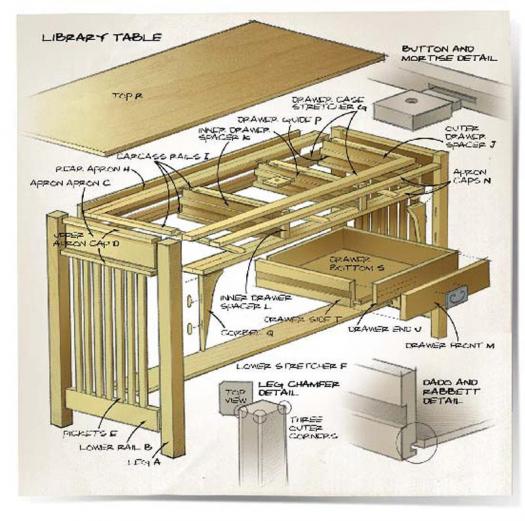 I found some white oak that had been rough cut for flooring, which meant that the pieces were all just under three and a half inches wide and a bit over one inch thick. What makes this project unique is the method used to assemble the drawer structure at the heart of this table. Building a larger project like this in a small shop is always a challenge, but by making the top first, and turning it upside down on level sawhorses, you can use it as a surface on which to build the main structure of the table. 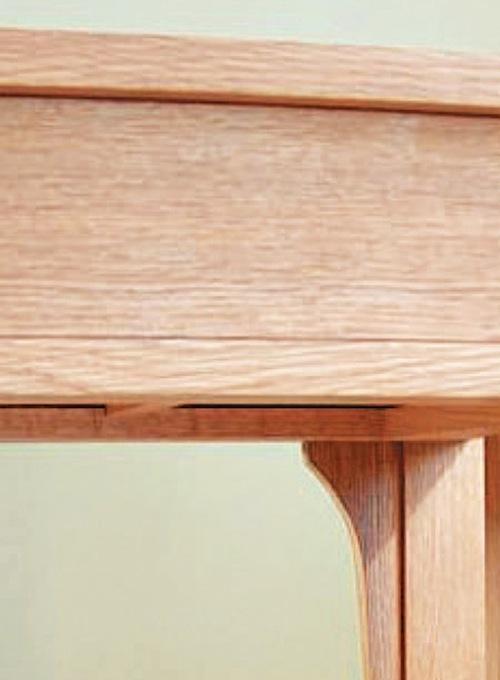 Begin With the Top

• Select your best boards for the top. Look for consistency in colour and grain.

• Cut the boards 1/2″ longer than necessary. The extra is trimmed off later.

• Mill the boards using a jointer, thickness planer and table saw, ensuring they are perfectly flat and square.

• Glue the top up in stages. Begin by gluing up narrow boards into wider planks, until they are just over one third the width of the top. When you have three larger planks glued up, run them through the thickness planer to reduce your sanding time later. With three planks prepared and finished to the final thickness of the top, test fit them in preparation for gluing.

• Prepare three sets of clamping cauls that will reach across the width of the table (I used some white oak that I was preparing for the legs).

• Run through a dry test to make sure there will be no surprises, and then glue the top up. Place pipe clamps on both sides of the top and, before tightening them, clamp the top between two of the cauls to keep all joints flush. Tighten the pipe clamps and set it aside.

• If you have stock large enough to make the legs from one piece, then skip to the last step in this section. I had to glue mine up from thinner stock using red oak as a secondary wood for the core and veneering it with 5/16″ white oak. Using a secondary wood, prepare a core with a cross section of 1 1/2″.

• Resaw some white oak to use as veneer for the legs. Keep the pieces matched so that the two pieces from one board can go on opposite sides of the leg.

• Select the veneer for the best face grain and then glue the pieces to the surfaces that will form the sides of the legs when viewing the table from the front.

• After the glue has cured, use a flush trim bit in a router to remove the excess white oak.

• Glue the veneer on the other two faces and then trim with the router as well.

• Using a 45º chamfer bit, chamfer the outer end edges as well as the bottoms of the four legs.

• Prepare blanks for all of the parts in the two ends from your rough lumber. There are 18 mortise and tenon joints in each end: pieces that are not square and true will make assembly a nightmare.

• The upper apron is made up of three pieces. This is done to maintain visual continuity from the long sides to the ends. Finish the three pieces before assembly, this will make clean-up of any excess glue a simple matter. Glue these up and set aside to cure.

• Cut the matching mortises in the lower rails and the glued up apron. Center the first picket and lay out three on either side on 2″ centers.

• Assemble the center panel without glue to confirm the distances between the centers of the mortises in the legs. Mark them on the legs and cut the mortises.

• After fine-tuning, glue the end assemblies together and clamp them to the top that is serving as an assembly table.

• The central element of this table is the drawer structure. It houses the drawers but also ties the two sides together using biscuits. The visible portions are white oak that have been laminated to red oak used in the center. This also allows for an assembly aid during the final stages.

• Prepare flat and square stock for all of the inner components.

• Cut the mortises in the rails that receive the buttons that hold the top in place.

• Cut the matching mortises in the carcass stretchers for the rails.

• Assemble the two frames and set them inside the legs that have been clamped to the top.

• To conceal the end grain on the red oak dividers, glue the end caps to the end of the inner drawer dividers. Use a biscuit, as the end grain will not allow for a strong, longlasting joint. This also turns the through dado into a stopped dado.

• Mark out the center drawer guides and cut the dadoes for these. By cutting them in both pieces at once, they will line up perfectly later.

• The stretcher caps and the rear apron are white oak and form the backbone of the drawer structure. They are held in place with #20 biscuits. Prepare the stock for these, and cut to fit between the legs.

• Mark out and cut the biscuit slots on the four stretchers and caps. The caps are slightly shorter than the stretchers to allow for the offset in the legs. Glue these up, making sure that each end is set back by one half of this distance. This forms a notch that will help keep everything square during final assembly.

• Assemble the two frames without glue, and if everything works, glue it up. Check the diagonals to be certain everything is square.

• With the frames in place, mark out the locations for the biscuits and cut the slots.

• Lay out and cut the biscuit slots on the rear apron and caps.

• The glue-up is quite intensive and it is best to have a second pair of hands. The best place to glue the table up is on the underside of the top. Place some waxed paper in any areas that might get glue on them. Apply your chosen finish on the frames and drawer dividers before assembly.

• One of the ends has to be removed from the top in order to allow the five parts to come together in the right order.

• Glue the upper frame to the end, then glue the rear apron to the upper frame, and then set the lower frame in place. This is a little tricky as there are biscuits facing in two directions. Once this is in place, the other end is glued to the two frames. Use the drawer faces as aids to help maintain the proper positioning of all the parts.

• When that glue has dried, glue the outer drawer dividers in place. The two inner drawer dividers are held in place with countersunk screws. Mark out the location to ensure that the three drawers are all of equal width and install.

Each drawer runs on three wooden guides. These are set into the dadoes that were cut earlier.

• Choose clear, quarter-sawn wood for your drawer glides. These must be stable to keep your drawers running smoothly from one season to the next.

Machine and Install the Guides

• Round over the front corner of the guide; this will make it easier to insert the drawers. Depending on the location of the guide, you may have to notch the opposite rear corner as well. Glue these into place.

• The corbels that join the legs to the drawer structure are not just decorative. They also add reinforcement to the corner making the table more rigid.

• Make one perfect pattern and then use a router to reproduce four more. Each corbel is held in place with two #0 biscuits and one #20. Finish the corbels before gluing them in place.

• The drawers in this table are heavy and solid. The bottom and sides are 3/4″ thick in order to provide the depth for the dados that receive the wooden guides.

• Prepare the rough stock for the drawer ends, sides and bottoms. The bottom is 14″ wide and must be glued up from smaller boards.

• Mark the bottom edge on the six drawer sides. It important that this becomes the reference edge for all dadoes. Cut the dadoes for the drawer guides.

• Each side also has another dado on the inside bottom edge. This receives the edge of the bottom.

• Cut the front and back for each drawer. Cut a rabbet into each long side of the bottom as shown in the illustration. As well, cut the dado for the center drawer guide. Finish all drawer pieces before assembly.

• Assemble the drawer box using biscuits in the corners, and a single screw through the bottom of the dado into the ends. Do not glue the bottom into the dado. It must be free to expand and contract seasonally across its width. Prepare drawer fronts from white oak and carefully glue them to the front of the drawers.

Top It All Off

• While the top must be firmly attached, it has to be free to move with seasonal changes in humidity. This is accomplished but using buttons. The ones at the center of the table are locked in position, but the other ones ride in elongated mortises that allow the table to move across its width.

• Sand the top though to 220 grit and apply a coat of finish.

• Prepare 16 buttons to attach the top to the table.

• Center the top on the table, and using large cauls, clamp the top to the table. From the underside of the top, install the buttons.

Touch up any areas where the finish may be damaged or incomplete, and put on a few coats of beeswax polish. To keep the drawers running freely, I rub a coating of paraffin wax on the guides as well as in the dadoes on the drawers. 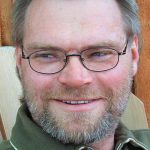 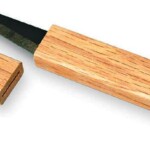 Marking knife
The Marking Knife is one... 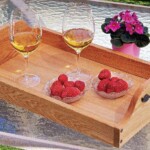 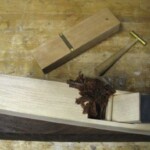 Make a Wood Hand Plane in an Afternoon
Wooden planes offer flexibility that... 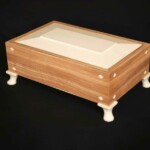 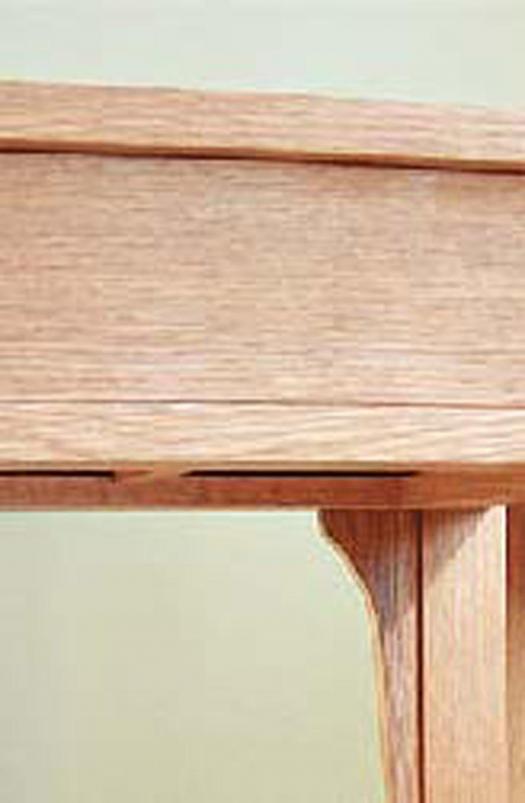