Make a Set of Inlaid Earrings 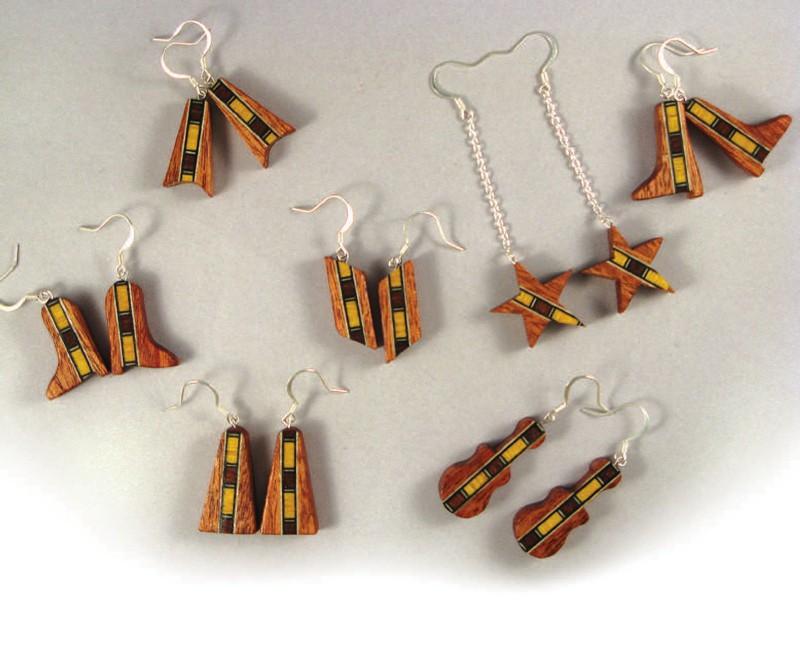 A plow plane is not that hard to use, especially if you know a few tricks. This fun jewelry project is the perfect project to get some practice. 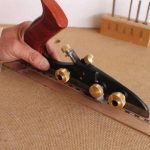 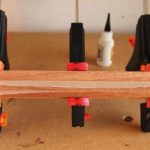 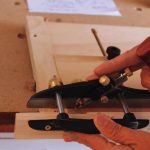 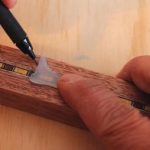 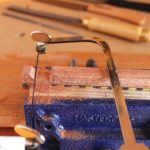 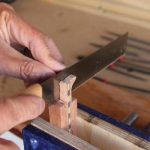 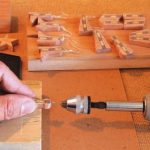 Hand-tool projects can be intimidating for beginners, but these inlaid earrings are suitable for all skill levels. For the beginners who have never used a plow plane before, you’ll find practical tips in this article on how to get started. Let’s begin some silent woodworking.

Depth Stop
Place the skate next to the inlay and lower the stop to touch the inlay. 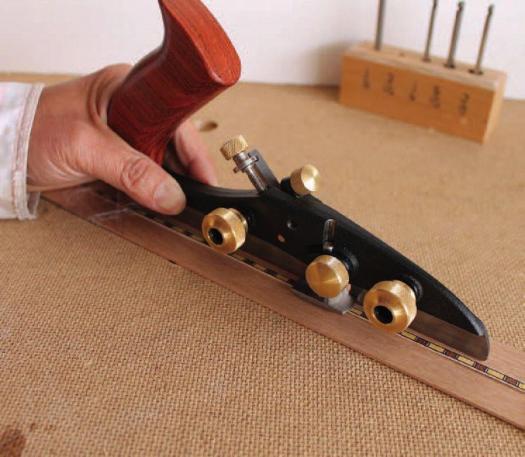 Plow Cuts
Point the index and middle fingers forward and start from the far end. 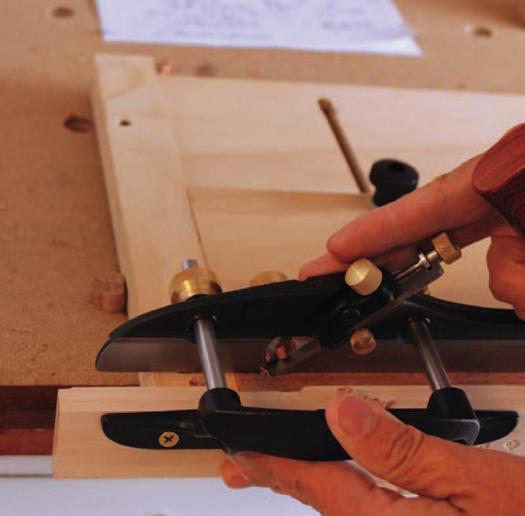 Inlay on Both Sides
Clamping cauls and wax papers are great helpers when clamping the inlay in the groove. 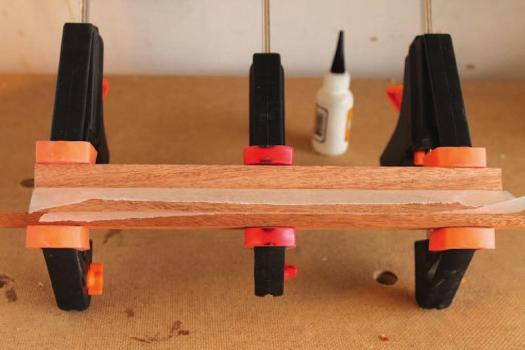 Transfer the Design
Trace all the designs onto the stock.

Resaw the Piece
Cut the workpiece into two pairs and file away any saw marks. 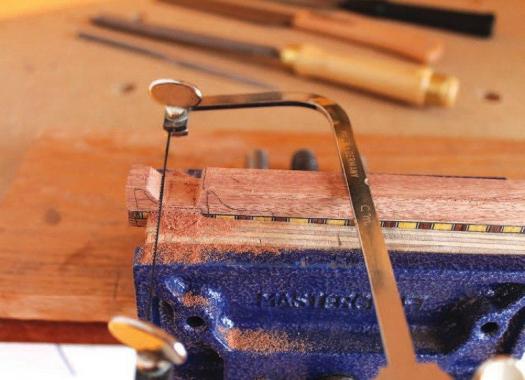 Drill Hole
Use a pin vise or a drill positioned horizontally for precision drilling. 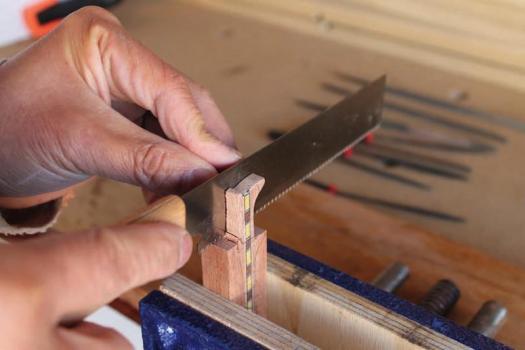 Cut out the Shape
Remove the waste with a saw then shape the profile with rasps and files. 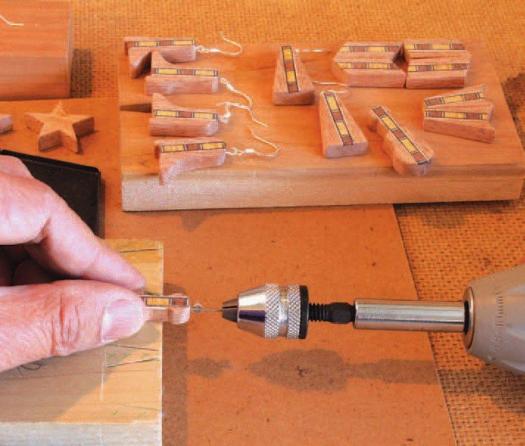 (3/16″ for the project featured here), assorted rasps and files, a coping saw, a thin-kerf saw, a pin vise or drill, and a pair of pliers. On the supplies sides, gather a piece of hardwood (about 9/16 x 1 x 12″), two inlay strips (3/16 x 12″), earring wire and hooks, CA glue, and the finish of your choice. Earring wire can be purchased at most craft stores, and even some dollar stores.

The first step is to develop some designs for the earrings or bracelets. You can put your designs on paper and transfer them to the wood using graphite paper or create your designs as plastic templates for reuse.

The plow plane is the hand-tool version of a power router used to make grooves. You’ll use it to make grooves that match the dimension of your inlay banding.

It’s common for a new user to make grooves that are either not square or not parallel to the face side. Such errors are easy to avoid if you learn and remember two key points.

First, always keep the plow upright and the fence in good contact with the workpiece throughout the planing. In prac­tice, place one hand low on the fence, pressing it against the workpiece at all times, and use the other hand to push the plane forward. To avoid tilting the plane as you push, hold the handle loosely: extend both your index and middle fin­gers forward.

Second, start the plow cut at the far end of the work and progressively move backward until you establish the groove. Make, at first, short strokes, gradually taking longer and finally full-length strokes. After cutting a groove in one side, flip the stock and cut a second groove on the other side of the blank.

With the two grooves cut apply a small amount of glue to the grooves and press the inlays in place. Clamp them for the glue to set. Once the glue is dry lay the earring template(s) on the workpiece and trace all the profiles on the work with a pencil.

Clamp the workpiece in a vise and use a coping saw to cut out the rough shape of the earring, leaving a small part of it attached to the stock for now. Continue shaping with rasps and files to create the profiles desired. Ease all the sharp edges.

To make a pair of symmetrical earrings, saw the workpiece in half and then separate the earrings by completing the pro­file with the coping saw. Repeat the shaping and re-sawing steps until complete.

The last construction steps are drilling holes, gluing the wires and attaching the hooks. Apply a few coats of the finish of your choice to bring out the design and grain.

If you’re still not sold on this “hand-tool-only” method, feel free to use some electricity to complete a few pairs of ear­rings. Just don’t wait until the evening of Dec. 24 and risk waking everyone up with all that noise.

Charles is one of the few hobby mechanical sculpture-makers in Canada, and likes to design and include mechanical elements in many of his projects. 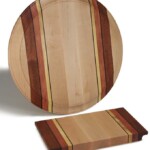 Cutting Boards
The Gift That Keeps On... 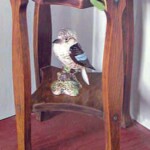 Plant stand
No matter what the memory,... 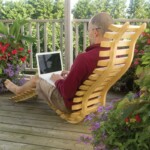 Build a bent-laminated lounger
This customizable lounger might be...

Build a Timeless Jewellery Box
Even if you’re not addicted...