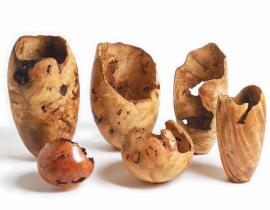 Turning a natural edge hollow is no different than turning an even rimmed hollow vessel – all the same rules apply. 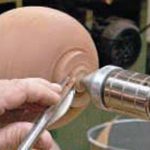 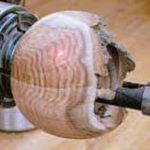 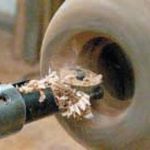 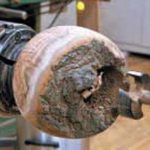 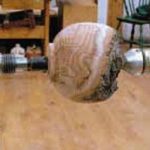 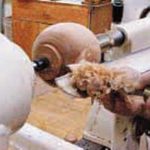 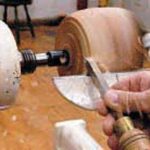 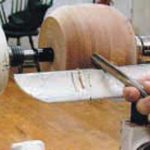 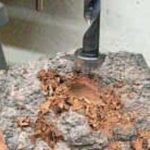 You use the same techniques when cutting out the inside of the bowl, but instead of having a continuous rim, you have a broken rim.

The cover of this magazine shows two examples of natural edge hollow vessels. Both were turned using maple burl. The smaller of the two is 7″ wide by 8″ tall and the larger is 7″ by 16″. They are fairly thin in proportion to their size. Hollow turning can be very similar to spindle turning in that a lot of it (not all) is started between centres.

Burl with a natural edge 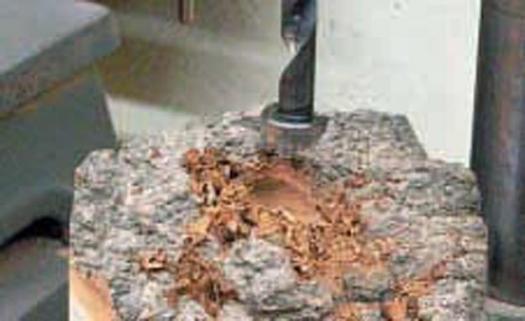 Rough out the burl 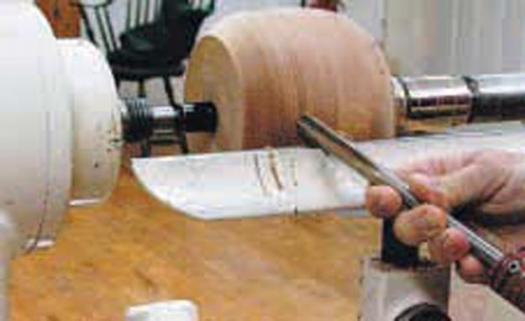 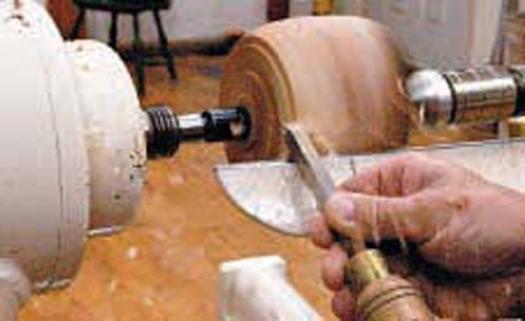 Scrape for a smooth surface 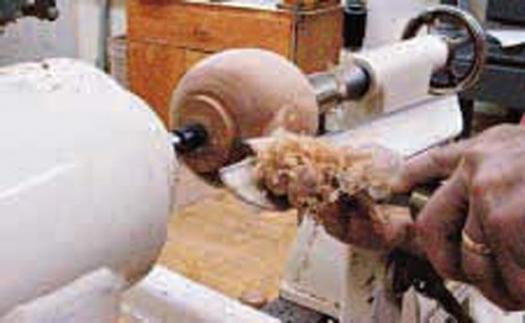 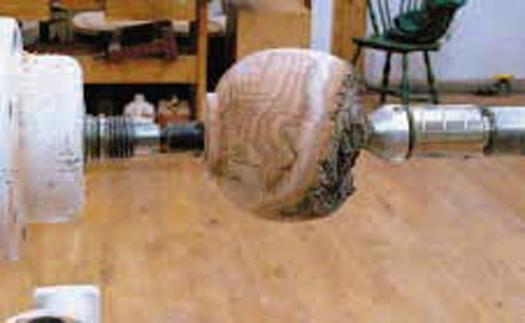 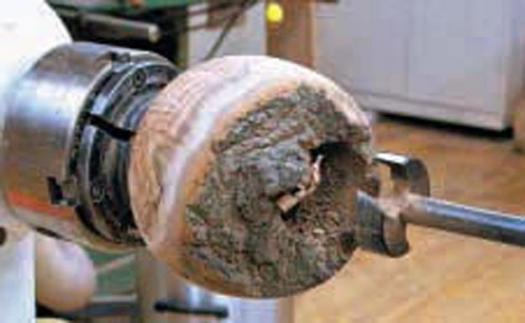 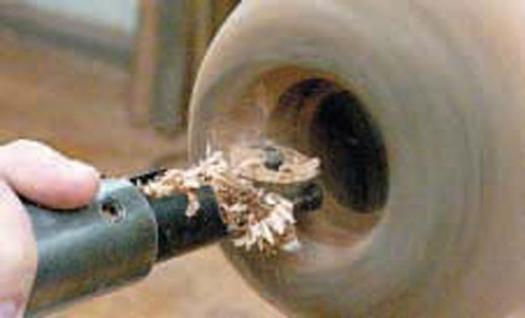 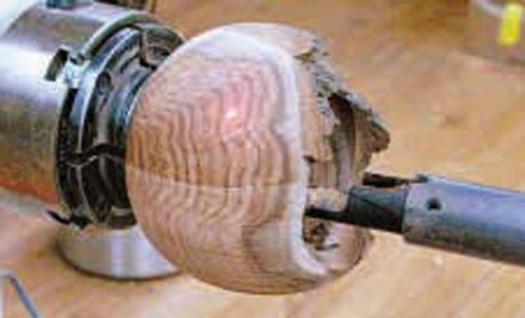 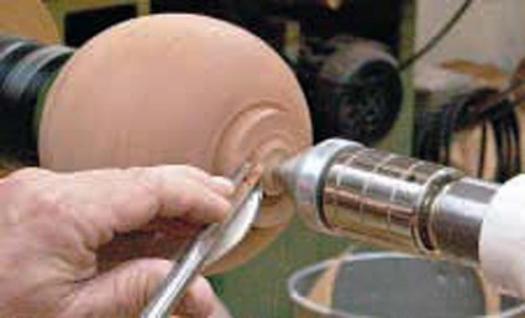 The outside is shaped first, and then the inside is removed. There are many methods and tools for removing the inside, however they all basically do the same thing: they scrape out the inside.

There are cutters that can cut the inside, but the more of an inward curve, the less likely you are to get a cutter into the right position. Over the years I have used different methods and tools to hollow out pieces. I use a Stewart System for certain projects. The Stewart System is a hand held tool which is very versatile. I also use the McKnaughton system, which offers even more bang for your buck. Then there are the home-made versions of arm braces and hookers. While these systems produce good results each has its own place. One of the most effective systems now is the “captive bar” or hollowing bar. Although these have been around for quite some time they were not available to the general public. The beauty of the captive bar is: 1) you no longer have to hang onto a tool. (This may not seem relevant at first, but if you’re holding on to a ten-pound tool for any length of time, you will appreciate this feature); and 2) the bigger the piece you are hollowing the more mass you need in the tool, as mass helps absorb vibration. In this article I will introduce you to hollowing with a captive bar.

I chose a piece of maple burl and started turning between centres. The burl had one side with bark on it, which becomes the natural edge. To make the tailstock centre bite the wood I drilled a 1″ hole through the bark and into the wood. The tailstock centre fits nicely into this hole. This is a much safer way of mounting a piece like this. Being a true burl, there is no grain direction; the grain runs in all directions.

I started with a 3/8″ bowl gouge. If the piece was orientated like a spindle piece, with the grain running from centre to centre I would have used a roughing out gouge. Once the desired shape was obtained, I made a spigot to hold the vessel. I formed the spigot with a 3/8″ beading parting tool.

To obtain a smooth surface which can be sanded, I did a light scraping cut. With a sharp scraper you can remove any tool marks that might have been made with your gouge. This burl really scraped clean leaving a beautiful finish.

Drilling out the centre saves time

It’s a good idea to drill out the centre, as it enables you to quickly and effectively remove a lot of material. It also provides the cutter somewhere to fall into. I mounted the piece in a Oneway Stronghold chuck to drill out the centre (you want tremendous holding strength especially when hollowing, and these are excellent chucks).

I then put a Jacobs chuck in the tailstock and drilled out the centre. The drill bit size is relative; if you are doing a big piece and the opening is large, use a large bit. With this piece I used a 1 1/2″ bit.

The profile of the cutter that I use has multiple areas on which to cut. The pointed end is more aggressive and the rounder end produces a smoother cut. In using the captive bar, imagine the cutter floating on two tool rests.

That, in essence, is what it is. The bar is very easy to move back and forth across the tool rest; in fact you can use just your finger to move it. The advantage of this is that once the vessel is very thin it would not take much movement of the cutter to ruin the piece. So this aspect of sensitivity gives you more control and a finer touch with the cutter.

Now the big question, how do you judge wall thickness? The first way I learned was to listen. Sound can tell a lot. The pitch will get higher, and to achieve even thickness the pitch should be consistent. The higher the pitch the thinner the piece until the pitch is inaudible and then you’ve gone through the side. By the way, it happens to everyone. Use it to learn. I believe that whether you use it or not, sound should be the first way to learn hollow turning so that you understand the principles. There are also other ways of measuring, such as fingers, or lights on the end of the cutter, or thickness calipers.

The most up-to-date and effective is a laser light. This laser light is held above the piece and set to the desired thickness from the cutter. The bar is then inserted into the vessel and the laser light shines on the outside of the piece. Cutting is then started and when the light falls off the piece, you are at the right thickness. What could be simpler?

After the piece is hollowed out to the desired thickness all that is left to turn is the foot. I reverse the piece onto a drum chuck. However, I still use the tailstock to turn away the majority of the foot. I only remove the tailstock when I’m turning the last little pip.

This is a fairly short look at an effective method of hollow turning. One thing is certain with a captive bar: you won’t get tired of holding a heavy tool. That way you’ll be able to spend a lot more time doing what you love turning.