A fundamental tool in many woodshops is the workbench. If you look at photographs of shops in days gone by you will often see a craftsman working on a project using the bench as a shop tool. 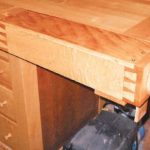 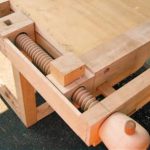 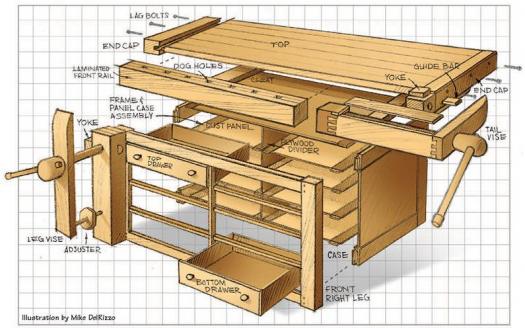 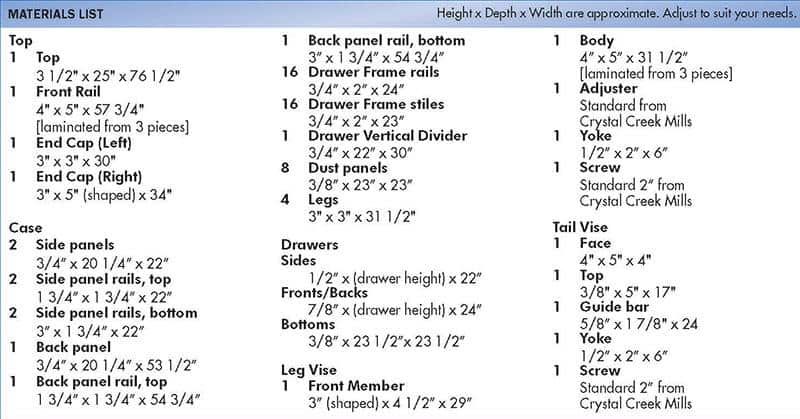 With such a wide variety of designs available, you really need to consider the work you do and the requirements you have for your shop, to be able to select the best options for yourself.

I had been woodworking for 5 years before I took on the task of making my first workbench. Until then, I had been working on a variety of non-efficient shop surfaces, often with a great deal of frustration. 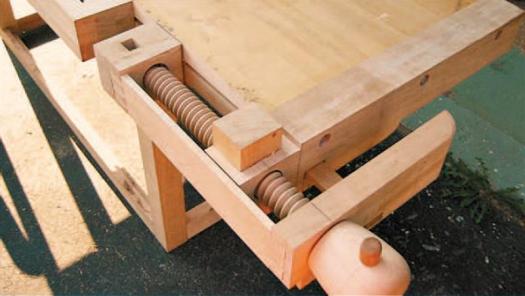 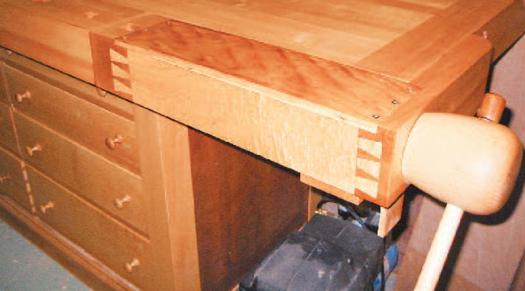 I began my search by making a list of the key characteristics that I wanted in a bench. My list continued to grow as I investigated books, shops, and the internet, looking for the right design. The main features I wanted were a large work surface, versatile vise options, ample drawer storage, and also a clean classic design. I finally settled on a design that is traditionally referred to as a Shaker Workbench.

There are many variations of the Shaker design. While I used a variety of sources for measurements and details, my primary source for construction details was Scott Landis’ “Workbench Book” (Taunton Press).

The vise construction focuses on authenticity and function. I chose a design that was consistent with a traditional Shaker bench, incorporating both a tail and a leg vise. I was inspired by the functionality of these vises and I sought out a screw that would be in keeping with the authentic look that I wanted. The bench screws are solid 2″ hard maple, available from Lake Erie Toolworks.

I began the bench by making the top. Since my salvaged wood for the top was already laminated I saved a lot of time milling and gluing. I was also able to use various parts of the laminated top for other parts of the bench.

The top needed to be configured to accept a tail vise, which has a body length of 21-1/2″, width of 5″, and height of 4″. I cut the front rail 57-3/4″ long and then glued it to the face of the bench top. At the other end of the bench the front sits on the leg portion of the leg vise, giving a massive solid top.

The front edge of the bench top is a double lamination (3-1/2″ thick) 12 inches deep running the entire length of the face rail, supporting the prime planing working area. This mass and strength gives the top the structure to resist deflection under planing and also supports any work that requires a solid striking surface. The rear of the top is built up with a few laminations of maple to accommodate the bench top’s 3-1/2″ thickness.

The tail vise is incorporated into the bench top. Its construction is essentially a two-sided box that is the body of the vise, with a wood screw and a vise bar that attaches the face of the vise to the tail of the vise. This provides strength and parallism in the vise as it travels through its full range of motion. The wood screw for the tail vise, leg vise and leg vise adjuster are all lubricated with an application of bees wax. The vise face is a solid piece of maple, 4″ x 5″ x 4″. It is attached to the back of the tail vise by a dovetailed board that is fixed to the side of the vise face and the rear of the tail vise. These dovetails were hand cut and are incredibly strong. The vise face also has a single bench dog hole, cut and chiseled by hand to match the ones in the face rail, pitched 3º from vertical back towards the row in the face rail. The top of the vise body is a 3/8″ x 5″ x 17″ cherry panel that is recessed into the vise face and into the tail portion of the vise body. The panel is attached with 6 brass screws, to enable access to the wood screw if maintenance is required.

To protect wood held by the tail vise I glued a piece of leather on the face of the vise.

The leg vise body is 4-3/4″ wide x 29″ tall, milled from 3″ hard maple. I shaped it with a variety of hand and power tools to match the classic look of a Shaker bench. I cut a mortise into the side of the leg vise for the yoke that captures the leg vise wood screw.

I then took some of the 1-3/4″ maple I salvaged from the extra bench top laminations and built up the front left leg with a 4-3/4″ x 5″ mass of maple. This acts as the face of the leg vise and also captures the captive nut for the wood screw, supporting the width and mass of the top front rail. I drilled two holes through the leg, one for the top screw and one for the lower parallel adjuster.

The open face of the bench case is 50″ wide x 27″ high. Inside this space I incorporated a frame-and-panel case assembly giving me space for 8 drawers. The drawer web frame also incorporated 3/8” plywood dust panels. While helping to keep dust out of the drawers the dust panels also add to the total mass of the bench. The drawers are 24″ deep, made from hard maple with matched curly maple faces. I used 1/2″ stock for the sides and 7/8″ for the drawer faces. The drawer heights range from 4″, 5″, 6-1/2″, and 8″. The drawers are all finished with 3/8″ plywood case bottoms, featuring through and half blind, dovetail construction.

I hand turned the drawer pulls from the re-cycled maple, attaching them with wedged split tenons. Making 16 pulls that are all the same is a real challenge, but the subtle variations add subtle character to the workbench.

The bench top is indexed to the base case using location cleats. The cleats are attached to the underside of the top to control the front to back and side to side register. The mass of the top is all that is needed to hold it in position.

I finished the top with a 3 coats of a boiled linseed oil application. I left the finish to dry on the top for two weeks, then I rubbed it out with 0000 steel wool and applied a wax finish. The case was also given a boiled linseed oil finish, followed by two hand applied clear coats to protect the base. The ease of repair of this style of finish on the top makes it a functional and simple finish to maintain.

I am very pleased with my results. The efforts of my research and homework helped direct me to select the bench I wanted and the features I needed. Attention to traditional to details and construction methods also paid off by giving me a fundamentally sound bench with an appealing classical Shaker design. 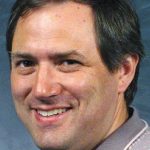 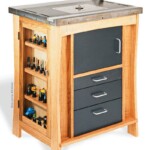 Router Work Station
Without a doubt, the router... 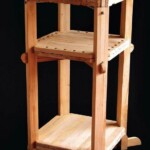 Carving Bench
The only way to effectively... 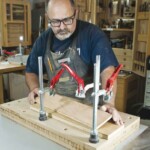 Build a veneer press table
The trickiest part of working... 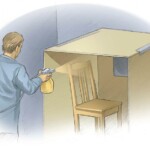