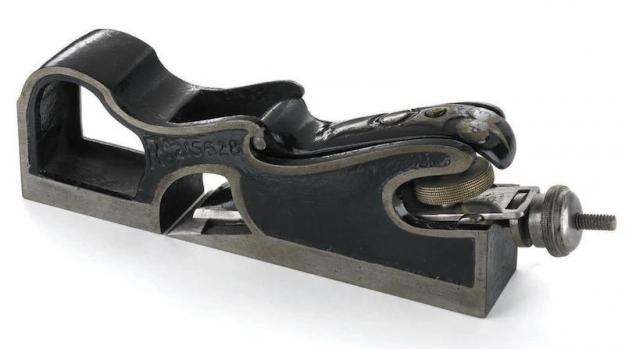 Lee Valley has a wonderful collection of tools, which, for the most part, stays behind closed doors. Rob Lee, owner of Lee Valley, shares some information about the collection in general, then selects one of his personal favourites and tells us all about it.

In a simple looking warehouse, just around the corner from Lee Valley’s Ottawa headquarters, lives a wonderful and varied collection of tools. Leonard Lee, founder of Lee Valley, started col­lecting tools shortly before he opened the store. It wasn’t an official collection at that point, but it quickly grew into one as soon as the business opened in the late ’70s. Now it’s his son, Rob Lee, who oversees the collection, and adds to it by attending auctions whenever possible. A quick esti­mate by Rob is that there are more than 30,000 tools in the collection, but it’s very hard to pin the exact quantity down, as many tools are purchased as a lot, kept together and counted as one item.

Great Collection
The tool collection is vast and intriguing, and informs some of the tool design decisions Lee Valley makes to this day. 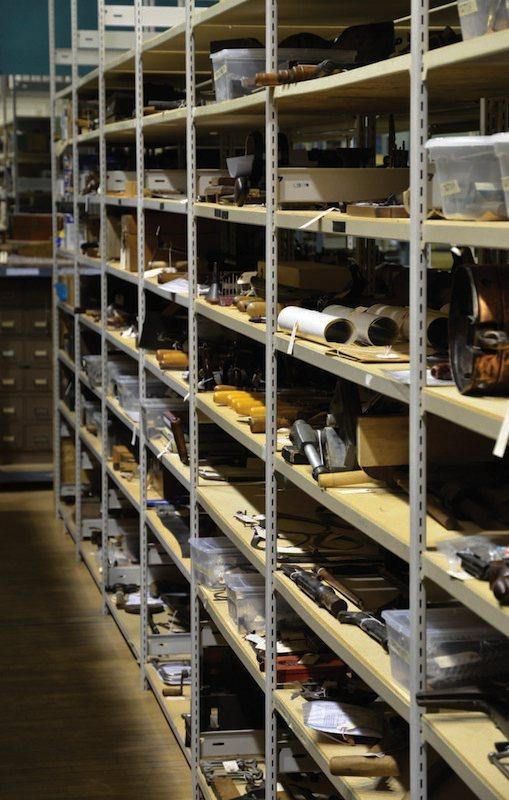 Take the Good with the Bad
The recessed field is only 0.5mm shallower than the surrounding raised edge. A great amount of skill and care is required to manufacture this detail. The downside to this is that the plane is harder to grasp properly, and the likelihood of it being dropped is increased. 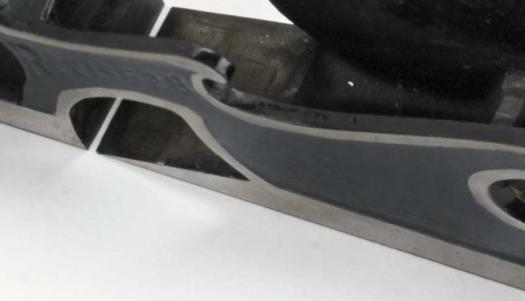 Very Short Run
The 1338P (right column, second from top) was introduced in Preston’s 1901 cat­alogue. Strangely, the same page told readers it was discontinued, as “Cancelled” was printed overtop of the image of the plane. 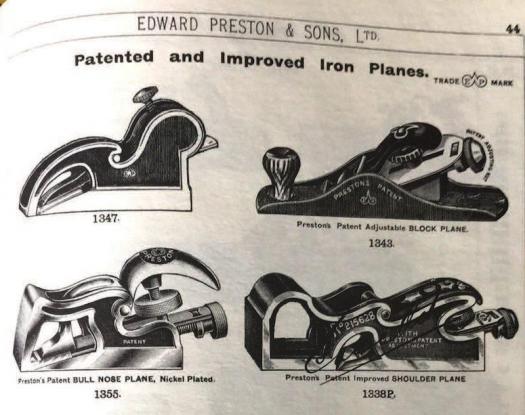 Gorgeous Details
The adjustment knob on this shoulder plane has been knurled with a purpose-made knurling tool. Preston took small details like this seriously, and had a reputation for creating beautiful looking tools. 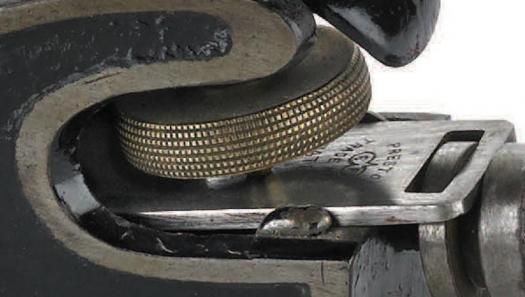 The collection serves a number of purposes. First and foremost, it’s used as a physical library for product devel­opment. During the development of a tool, the staff have the opportunity to measure, feel and use any tool in the col­lection. This allows the team to learn a great deal about the history of a specific type of tool, and gives them functional and aesthetic ideas for the tool they’re going to develop. Some of the tools are very rare, while others are common, even poorly designed or manufactured, but all provide input into the process of making a new tool. The second pur­pose of the collection, and one you’ve been witness to many times if you’re a Lee Valley customer, is to provide their photography studio material to shoot catalogue covers, calendars and other materials. A third purpose of the col­lection has yet to be realized. Currently there are few tools from the collection on public display. Lee’s vision is to one day convert much of the collection into travelling museum displays, with many of the better pieces touring their stores. The stories of the tools will help to cre­ate excitement for tools in general, but may also draw more customers into their stores. Generally speaking, tools are added to the collection for a specific purpose. That’s how they get value out of the collection.

The scope of the collection is gen­erally rather unfocused, but that’s just how Lee likes it. “Our collection is one of the largest, most unfocused collec­tions around,” states Lee, “and there are many other collections that are far more impressive. Our collection helps deliver the context and story of tools to the customer. People don’t want to just buy products, they want to buy stories. They want to understand why a prod­uct is the way it is, and where it came from.” Other collections are quite differ­ent, according to Lee. “It really depends on what type of story engages the collec­tor most. Whether it’s one manufacturer they’re interested in, one type of tool, one period of time, or even one trade, each collector has a different mind-set. We’re unfocused as we don’t want to tell one story, we want to tell many stories, and we have the need to keep engaging a very large customer base on a regular basis.”

How does Lee compare Lee Valley’s collection to others? “We have some really cool pieces, but until you get out there into the collecting world most people have no idea how many unique pieces there are. There are tens of thou­sands, even hundreds of thousands of very unique pieces out there. We’re talk­ing centuries of production in many countries. We generally focus on North American and English tools, and rarely get into other tools.”

There are about 20–30 items valued in excess of $10,000 each in the collec­tion. Though it’s impossible to put an exact figure on it, Lee says the value of the entire collection would be well over $100,000, but less than $1 million.

I’ve had the pleasure of meeting Rob Lee a number of times. He’s always a gentleman, and speaks in an even, almost quiet, tone. What surprised me right away during our recent conver­sation about his century-old Preston shoulder plane was how animated and impressed he was when talking about it. I guess I shouldn’t have been surprised how he’d react when asked about one of his favourite tools.

“What makes this Preston shoulder plane particularly difficult to manufac­ture is the open work. It’s an incredibly fragile casting. It’s about 2mm thick in many parts. If this is dropped it will snap,” Lee says, mater-of-factly. “What makes this really unique is the recessed, japanned field, which is only about 0.5mm deep. The field is almost flush with the edges on both sides of the plane. When you’re doing sandcast­ing you have to place both halves of the mould, on either side of the plane, pre­cisely, so you get the open work. Then, when you start doing the casting, you have to orient the casting so there’s less than 0.5mm of positioning error front to back, and side to side. I have no idea how this plane was even made.” I couldn’t help but laugh at this point. To hear Lee was stumped at how a tool was made only proves how incredible this plane really is. “I don’t believe that any manufacturer could cast this today, using the same methods. This was the acme of the art, for the time. When you look at how precisely the parts fit together on this plane, it’s phenomenal. All contact surfaces are beautifully designed, and accurately detailed. The knurl is beauti­ful and crowned, and was made with a purpose-made knurling tool. It’s a well thought out tool that is gorgeously made, and I suspect they lost their shirts mak­ing this tool. It didn’t last very long in their product lineup. Even if you ten­sioned the lever cap too much you could very well snap the plane.”

Lee goes on to talk in more depth about some of the manufacturing tech­niques, which obviously impress and confound him. “Sandcasting by hand is a very skilled trade. The patternmak­ers had tool kits that looked like a pastry chef’s tool kit. They had spatulas and so on that they could make the impres­sion in the sand, then go work with it, smooth out any chucks that fell apart, sort of like icing a cake in reverse, as they were working with the hollow, instead of the outer surface.”

Lee has only seen two of these planes. “I know they’re out there, but it’s such an incredibly rare piece, and I have no idea how many were made in the first place.” That’s usually bad news for a collector, but not for Lee, as he already owns one. “I think they produced this plane for a portion of one year. I’m sure they figured out very quickly that this was virtually impossible to produce. If you take a look into the bottom of the casting you’ll see there’s hollow work there, too. It’s almost like a taco shell. It’s incredibly fine casting. It would be a difficult tool to make out of plate steel, let alone cast it.”

“What’s really neat about this plane is the fact that you couldn’t make it today,” Lee continues. “This type of casting is a lost art. This is the product of an artist, not a manufacturing practice. It probably had a yield of about 1:10. In fact, that would have been very good. This was a premium plane that could very well have been designed and made for show at an international exhibition, just to show their capabilities.”

As impressed as Lee is with this plane, he admits there are pitfalls associated with producing it as Preston did. “Not having enough of a reveal between the field and the raised edge is a danger, as that’s what gives the user a mechani­cal lock on the tool when in use. If they went to a deeper recess, your fingers hang on better. This plane will easily slip out of your hand if you’re not care­ful. This is a case where you can admire the accuracy and the skill, but they over-did it. The last thing you want on a plane like this is a grip surface that isn’t optimal.”

I knew my last question, about the plane’s value, was going to stump him, but I had to ask. Lee’s response was measured, and he admitted it’s impos­sible to tell until he puts it up for sale – which he isn’t about to do. “It’s hard to know what the value of this plane would be today, without exposing it at an auction, to see what people would pay. Preston is very sought after because they are very graphic, upper-end tools. A guess on my part would be somewhere around $3000–$6000, but it’s very hard to say. Each auction plays out very dif­ferently, and it depends on the day, and the audience.” It sold for 12 pounds in 1901.

Do you know someone with a great tool collection?

Is there one antique tool that fascinates you? Post your thoughts on our website, at the end of this article. Also feel free to email me any details – [email protected].