Home Techniques and Tips Tips/Techniques 3D printers in the workshop

3D printers in the workshop 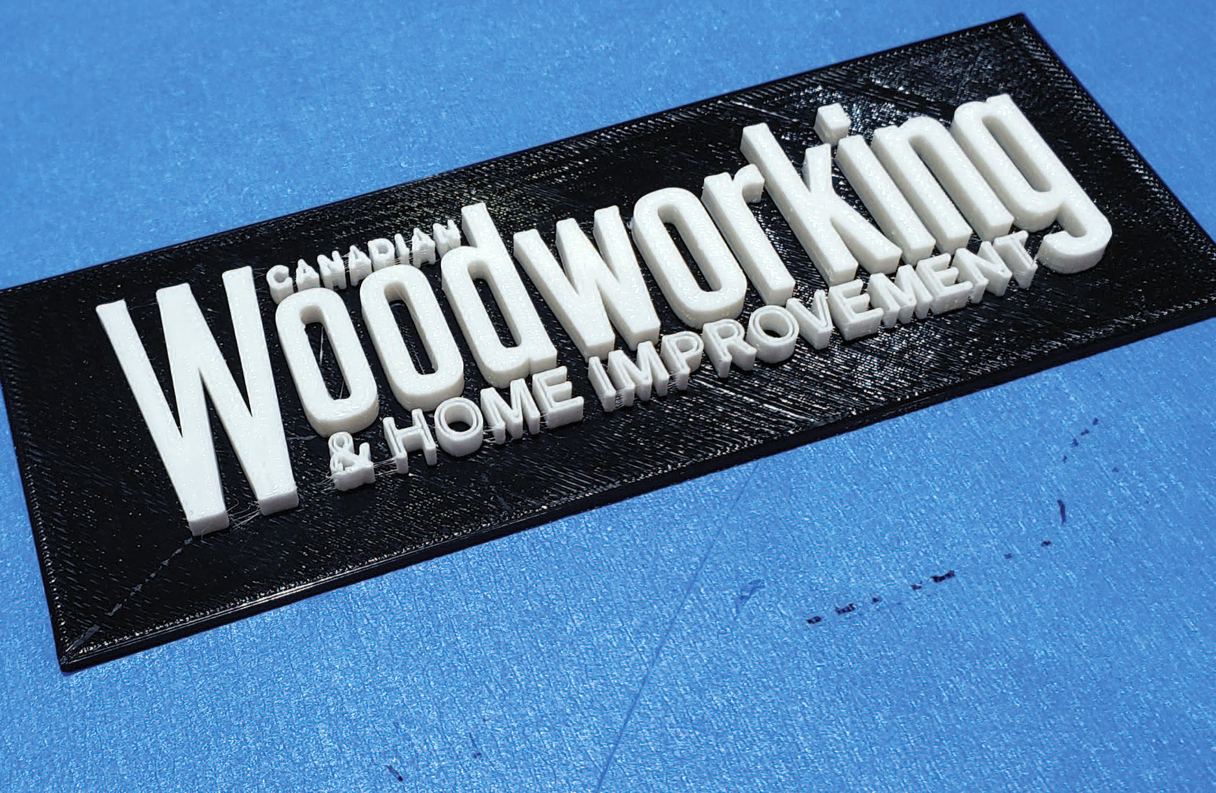 What are 3D printers and do they have a place in the workshop? 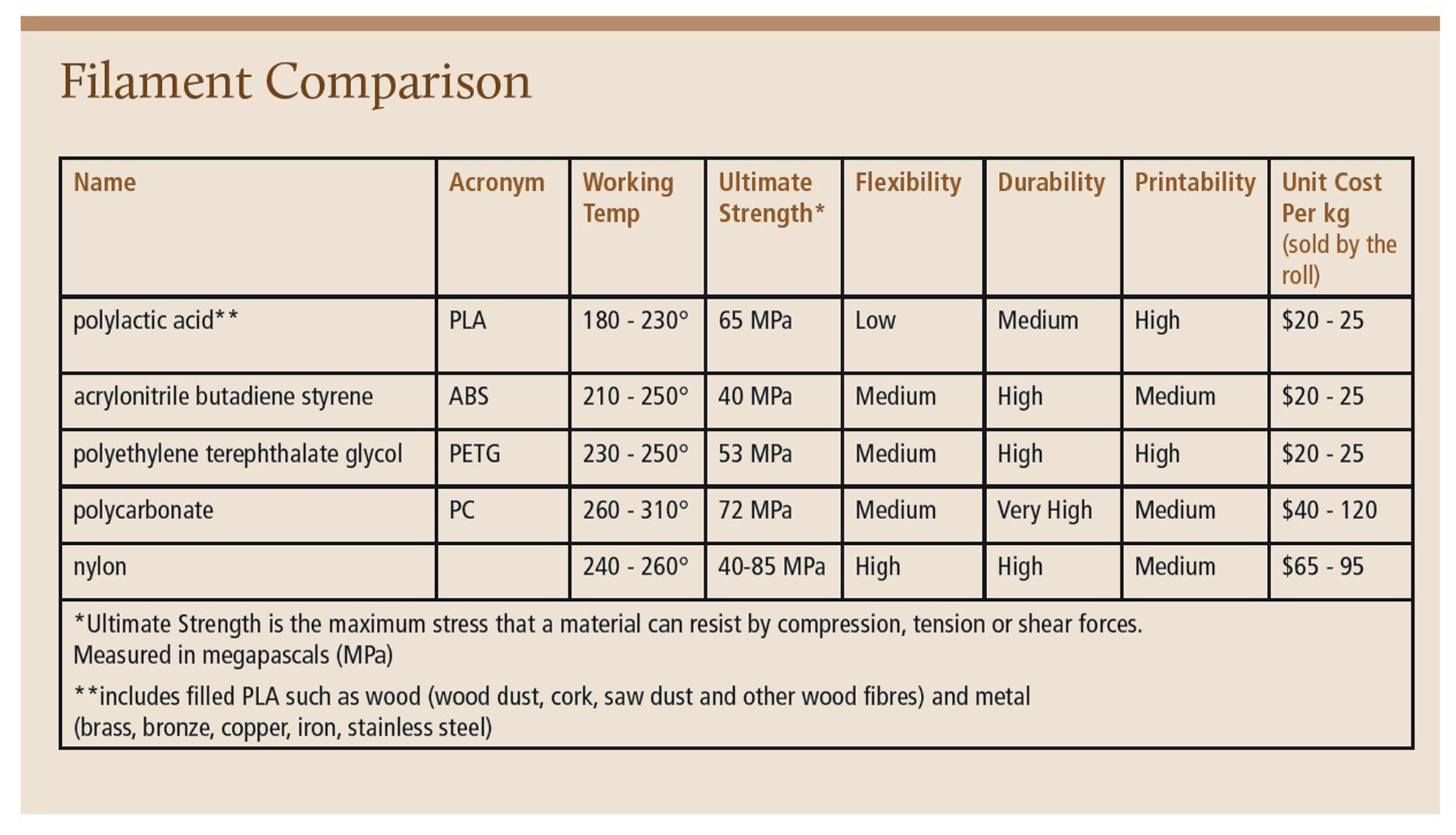 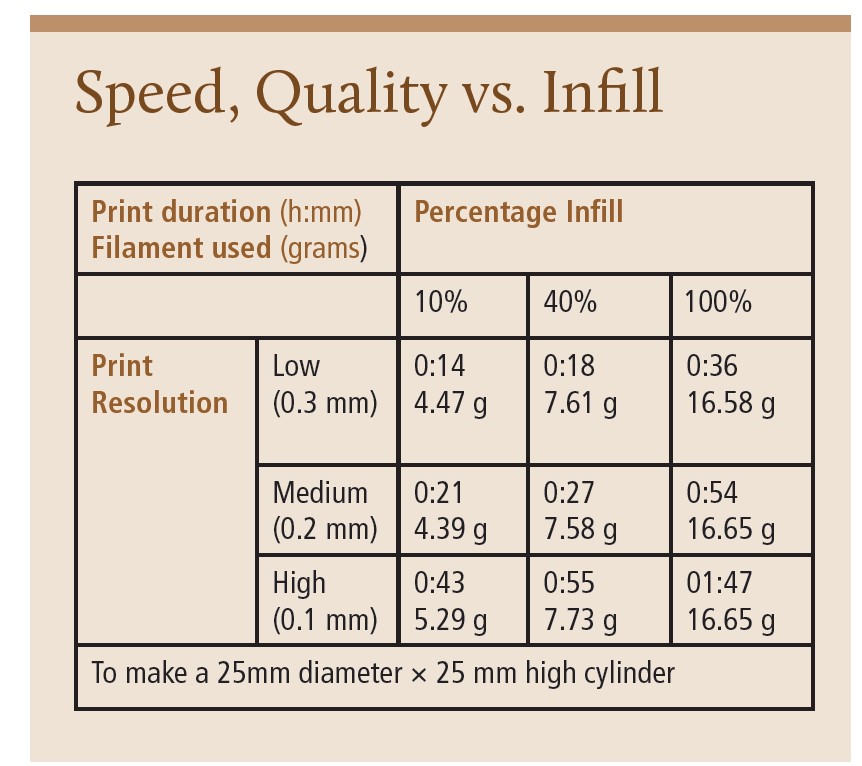 The concept of 3D printing is not new. The idea was discussed as early as the 1940s. However, devices capable of producing 3D printed material didn’t arrive until the 1970s, with commer­cial machines really starting to expand in the ’80s. Like most technologies, as they develop, their availability increases and cost decreases. Over the past 10 years, 3D printer options have exploded. There is now a wide range of styles of machines avail­able at various price points that make it very easy to get into 3D printing. You can get a unit for as little as a few hundred dollars or up to hundreds of thousands of dollars for industrial machines.

To begin your journey into 3D printing, there are two factors that must be understood. The first is that 3D printing comprises a num­ber of different processes, some of which are readily accessible to consumers, while others are limited to industry applications. The second factor is understanding the types of materials that can be used in each machine and their physical properties. We will first explore two of the most common forms of 3D printers available to consumers. 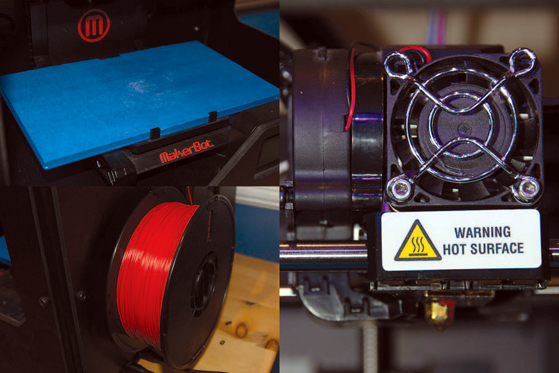 Post Print Finishing
A completed 3D print can be left as is or can be sanded, primed and painted to improve surface quality. (Photo by Makerbot). 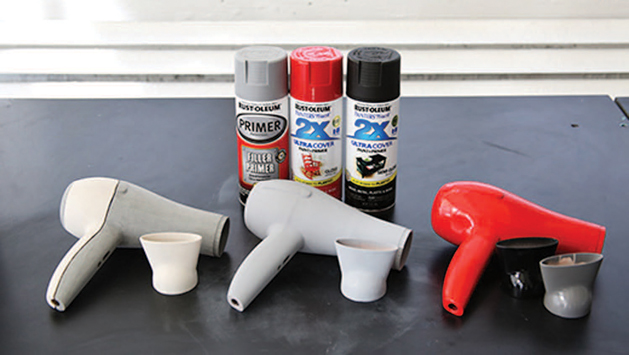 A Sliced 3D Model
Shown is a screen capture of a software tool that “slices” a 3D model so it can be printed. 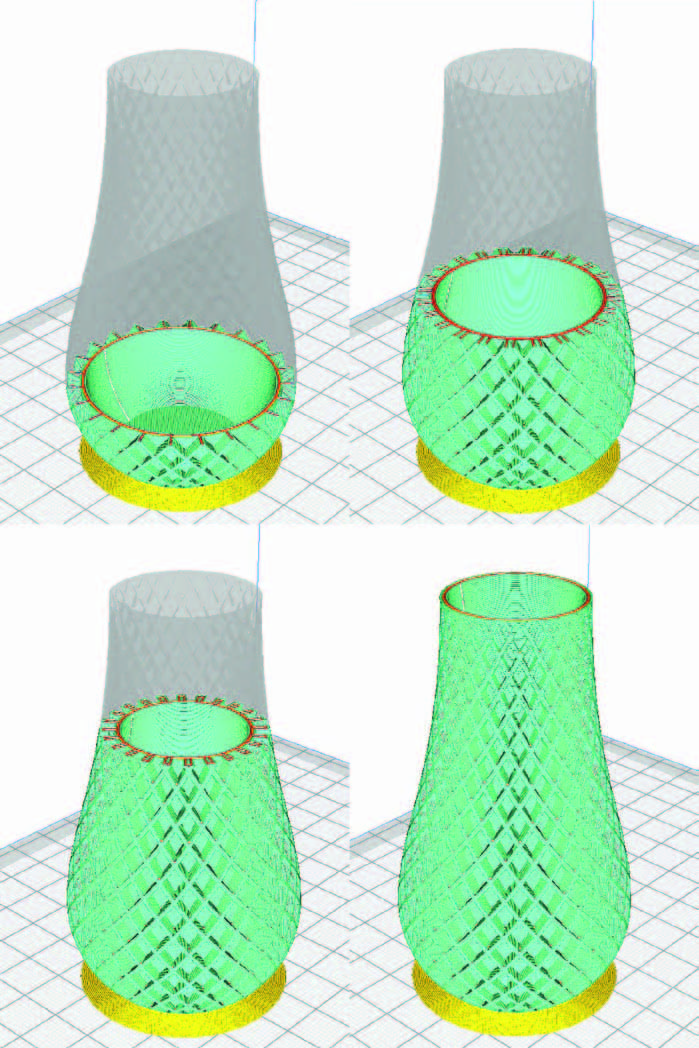 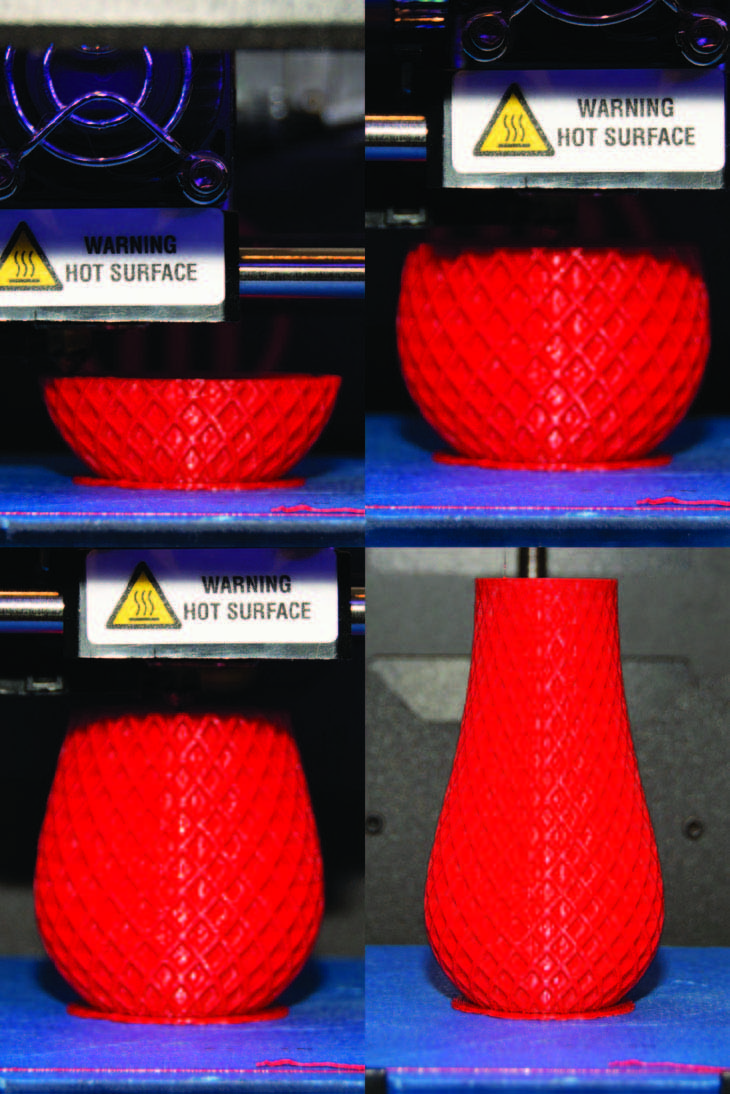 Infill
Shown are three prints with infill amounts from left to right of 10%, 40% and 100%. Different amounts of infill, which affect the amount of filament used, determine the strength of a part and length of a print. 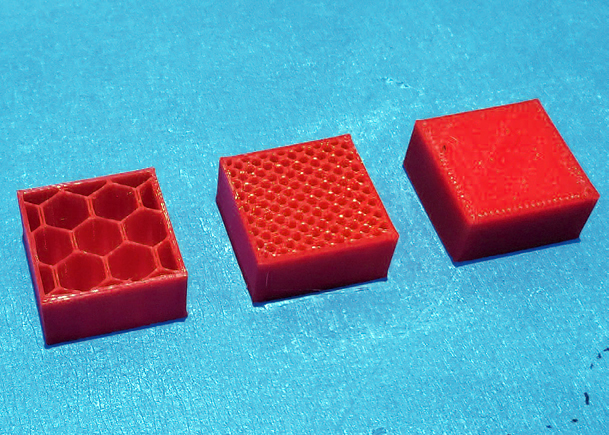 Breaking a Model Up into Components
Larger prints may be broken up into individual components to go from one large print job to multiple shorter jobs. The print job shown took one hour, 38 minutes, and uses 16.26 g of material. This is less than $0.50 worth of material.

A Resin Printer in Action
A resin printer prints objects upside down, and they appear to “emerge” from the resin. (Photo care of Envisiontec) 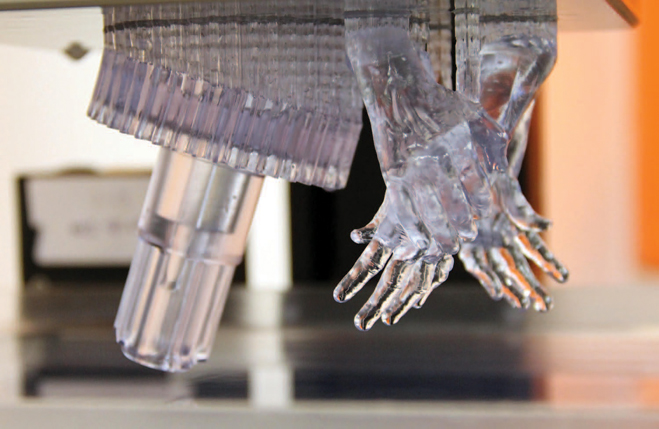 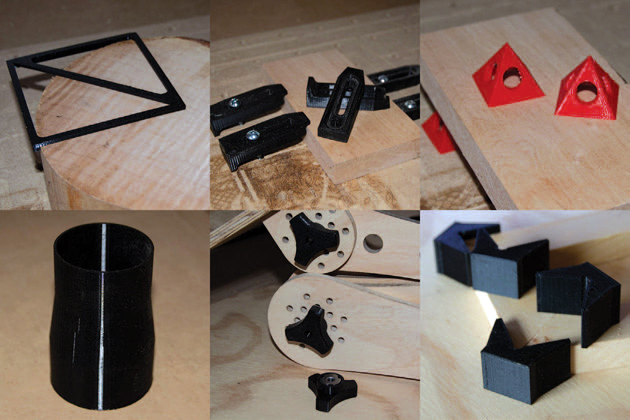 An Example of a “Resin” Printer
Resin printers are typically smaller than other forms of 3D printers and can be accommodated on desks or benchtops. (Photo by Formlabs) 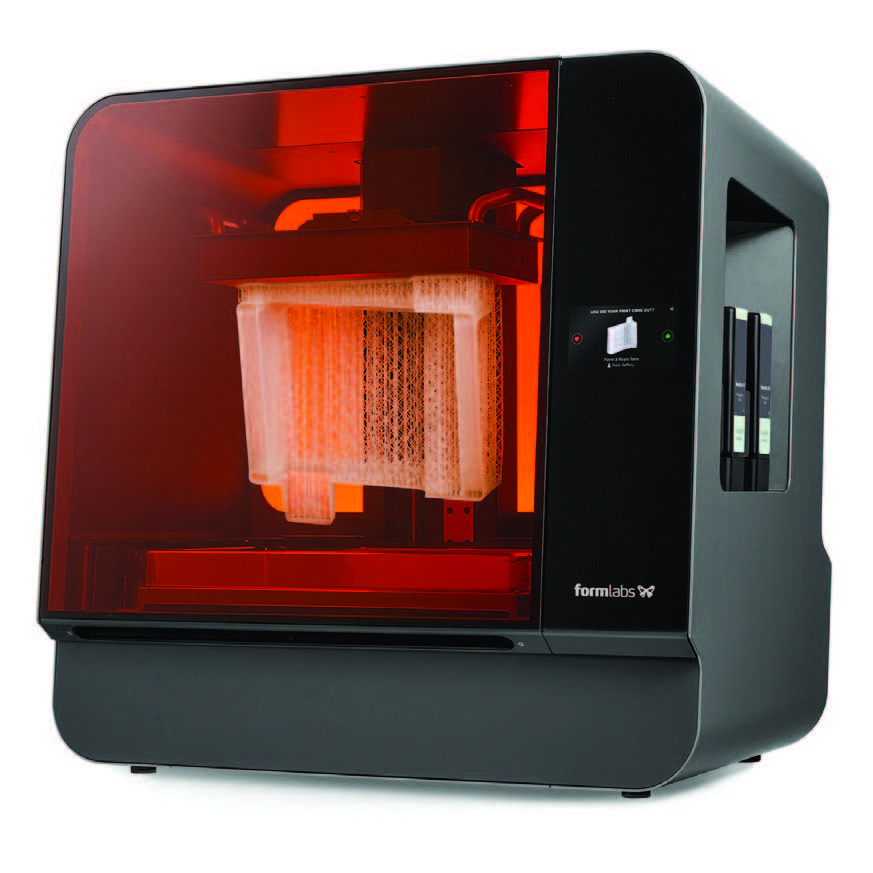 3D Printing in Powdered Metal
3D metal printing offers a huge array of possibilities that can simplify the manufacturing process and reduce the need for precision machining. (Photo from Proto3000l) 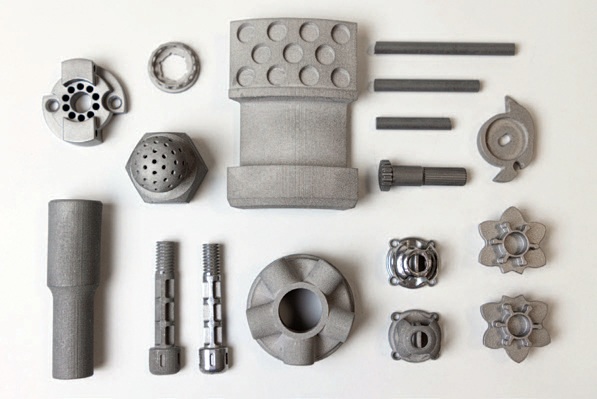 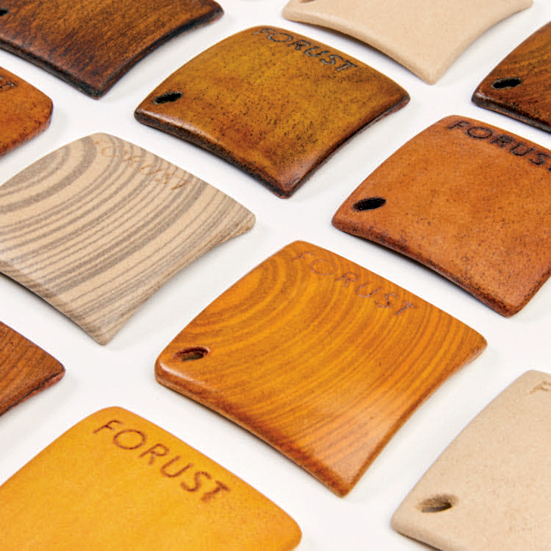 The most common category of 3D printers is called extrusion-based printers. Fused deposition modelling (FDM) printers are the most common type in this category. These units are typically desktop in size, and feature a build plate, a gantry with x, y and z axes, an extruder unit, and a roll of filament. The general principle of FDM printers is that a 3D model is broken, or “sliced,” into layers along the x-y plane and then built up layer by layer. It’s very similar to how masonry walls are laid, but instead of using bricks the extruder heats up the filament and extrudes it in a thin bead similar to how a hot glue gun works. The width of the bead depends on the resolution of the printer, but tolerances the size of human hair are com­mon. As the model is built layer upon layer, the build plate lowers, allowing for the model to form. Once completed, it’s gen­erally good practice to allow the model to cool for a few minutes before removing it from the machine.

FDM printers have several advantages over other styles of 3D printers. They are inexpensive, compatible with a wide vari­ety of materials, have an excellent number of resources available and are relatively safe. The main hazards consist primarily of potential burns if you come in contact with the extruder when it’s hot, and pinch hazards if you get caught between any of the moving axes when in operation. These hazards are typically addressed by the manufacturer by providing a full enclosure around the machine. However, many FDM units are similar to CNC routers and are not fully enclosed.

One of the largest considerations when 3D printing a project is the material to be used. Material for FDM printers looks very similar to solid core wire. It comes in spools that usually hang off the rear or side of the printer or can sit on a stand next to it. Filament comes in two standard thicknesses: 1.75 mm and 2.85 mm. The filament can be made from a wide range of materials and can come in a dizzying array of colours.

Not all 3D printers are capable of work­ing with all of these materials. However, most entry-level machines will operate with PLA, ABS and PETG. Generally, the wider the range of material, the more advanced the machine. The majority of FDM print­ers only print a single material at a time, so prints tend to be monochromatic, based on the filament colour. Some units do have dual extruders which will allow for two colours to be loaded or potentially use two differ­ent materials, if available. However, most consumer units print only one extruder at a time. Due to the range of material, it’s important for you to be aware of your machine’s settings to ensure you select the proper parameters for the material you’re working with. Also, due to the fact that most 3D printers have cooling fans attached to the extruders, there has been concern about nanoparticles becoming airborne. To address this, some units have complete enclosures with filtration built into the unit. Regardless, it’s always advisable to work in a well-ventilated space and always follow the manufacturer’s and supplier’s instructions for operation.

Vat photopolymerization printers are the second general category of 3D printers you’ll likely encounter. Stereolithograph (SLA) print­ers, commonly referred to as resin printers, are the most common consumer type in this category. This type of process differs from FDM printing in that the print material is a light-reactive thermoset material, or simply a liquid that reacts to specific types of light, ver­sus a solid spool of filament. These machines consist of a build plate, a resin reservoir and a laser. Essentially the process is similar to FDM printing in that a model is “sliced” and then built layer by layer. Where it is different is that the build plate is submerged in the resin tank and as the build plate is raised out of the resin, the laser cures the surface layer of material to the build plate. It appears that the models are emerging out of the resin (similar to how creatures emerge from the murky depths in movies). As a result of this process, models are generally built inverted.

Resin models are generally monolithic, and do not have the same ridging characteristic as FDM models, which make them excellent for jobs that require a high degree of resolution. The print time for an SLA model is the most attractive characteristic of resin printers, with prints being completed in minutes instead of hours. There are two main downsides to SLA printers, however. They generally have a smaller build volume than FDM machines and, most importantly, the resin is highly toxic and should not be handled by inexperienced users. Cost is also a factor for SLA units, with an entry-level unit costing approximately $4,000.

Regardless of the type of 3D printer you choose, their application in the workshop is similar. The ability to design and fabricate compo­nents makes them an extremely versatile tool. I routinely use my 3D printer to create prototypes of projects, fabricate knobs for projects, jigs for simple tasks, containers for parts and custom tools to aid in those hard-to-reach places. There is also a huge online community of users who share their models in massive databases, with many offer­ing free downloads. One of the largest communities is on thingiverse.com. You can browse the catalogue of models by keyword or user and find a variety of designs you can download to print or alter your­self if you want to customize them.

Should you buy one?

Do you need to buy a 3D printer to explore the technology? Surprisingly and thankfully the answer is no. While owning a machine does make it easier for you to print jobs, if you don’t want to invest in a machine, there are a variety of community resources that offer access to machines for free or for a nominal cost. Public libraries often have “makerspaces” equipped with 3D printers that you can access, and will often have trained staff to assist you with your learning and may even offer workshops. Commercial mak­erspaces are also a popular venue for accessing 3D printers. Most offer memberships or have drop-in hours allowing you to use their equipment. Most secondary schools and post-secondary institu­tions are now equipped with 3D printers, so while they may not be open to the public, if you have a child attending one, they may be able to print for you. There are even online services that will allow you to upload your file to them, specify the material and a few other parameters, and will print it for you and then ship you the completed part.

Perhaps one of the most exciting parts of 3D printing is the speed at which the technology is advancing. For example, in the past few years, technology in 3D printing has evolved to allow for 3D printing in metal for consumers. Also, processes have been developed to 3D print in wood-based material. While these types of innovations may not yet be available for your shop, these new ways of manufacturing can lead to more cost-effective and environmentally conscious solu­tions, which will allow us to continue to work in safe and productive manners. When examining technological innovations, I am always reminded of a quote from Albert Einstein: “Imagination is more important than knowledge.”
Hopefully, you now have a bit more knowledge about 3D print­ers; it’s up to you to do the rest.

Chris is a curriculum consultant with a background as a technology education teacher, an architectural technologist and a contractor. He is a CNC enthusiast using both addi­tive and subtractive tools in his projects.

Chris is a curriculum consultant with a background as a technology education teacher, an architectural technologist and a contractor. He is a CNC enthusiast, using both additive and subtractive tools in his projects.