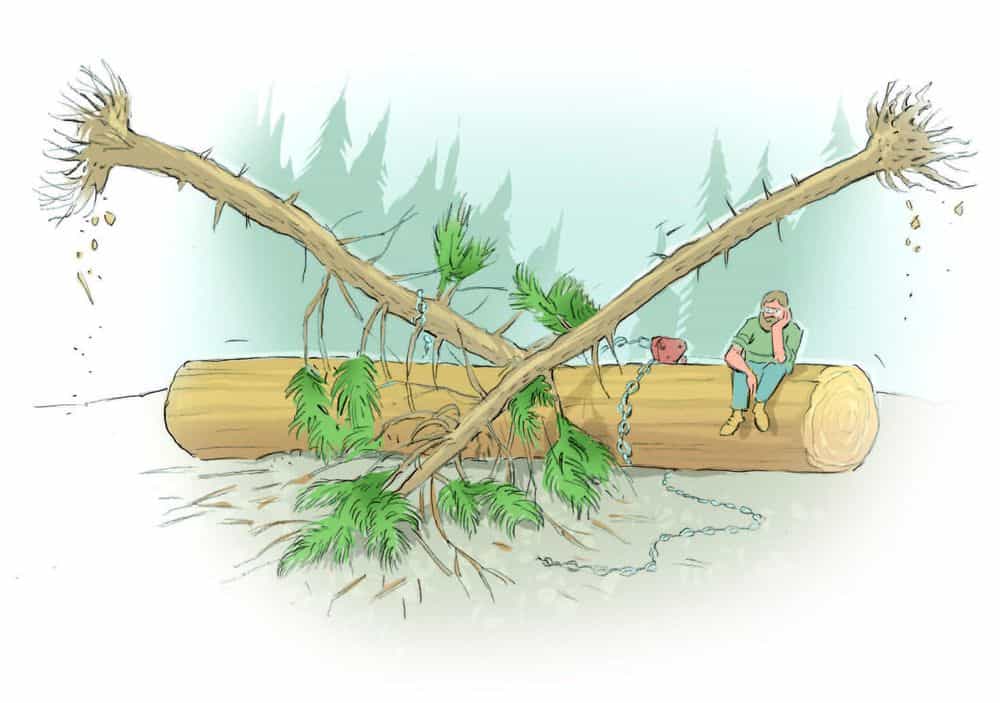 When last I left you, I was on my way to log-house-making college. For some reason, I had brought my brother-in-law along with me. No one recalls what he had done wrong to deserve such punishment, but apparently it was bad enough that his parents wanted him out of the house for the summer. They even paid me. Not enough mind you, but it helped with the food and gas bills.

I won’t go into the details of the trip or the log construction course, although I’m sure I could if I was asked nicely, or any other way for that matter. Suffice it to say that I learned just enough to believe I was now a fully trained and expert log house put-together. I also learned that a weekend spent in Ver**lion is like a year spent anywhere else on the planet that you’d hate to be. My goodness, but that town was boring.

The three-day drive back up the Alaska Highway took six days, and proved to be completely uneventful, if I don’t men­tion travelling through the massive forest fire in the middle of an army convoy for seven hours one night.

Once we finally arrived in Whitehorse, I was eager to get started on building the home for my family. Early the following afternoon I was at our lot deciding where to place our mansion. Fourteen acres and still my choices were limited. To the West, the weird neighbour lady had built her house too close to our property line, and it had been my great misfortune to spot her clearing brush around her house … topless! That firmly reinforced my wish to build as far away from her as possible.

The neighbour to the east had strip-mined a treeless swath 80 feet wide and 200 feet deep across the front of his prop­erty and plunked an old trailer in the midst of the resulting gravel field. I defi­nitely did not wish to look out on that every day. This left me with only one alternative. Near the back of the property was a gently sloped and forested knoll, overlooking a wildflower-covered moun­tainside across the valley. Oh well, if that was the only alternative then I suppose we would just have to live with it.

I began clearing the brush and trees from the house-site that very day, and by the time night fell I had managed to do very little at all. It turns out that clearing a forest happens to be hard work, some­thing I hadn’t considered. Clearly, help and hard work were needed if I was ever going to occupy the house in my life­time. And help and hard work is exactly what brothers-in-law were invented for.

Day after day we worked. They peeled the logs, complained, got blisters, complained some more, and once, by accident, raised a little sweat. Meanwhile, I dug holes in the sandy soil for pilings, sweated on occasion, and constantly questioned why I hadn’t just bought a house in Whitehorse instead. Oh right! Because my wife wanted a log house in the woods. Case closed, tied up with a large steel cable and then locked away and sealed in the archives for evermore.

Eventually the logs got peeled, the footings and pilings were more or less straight, and somewhat level and rela­tively square to each other. At long last we could begin to place the logs wher­ever they were supposed to go. Not that I had a clue where that might be.

But first I needed to devise some means to lift the monster logs from where they lay scattered around the lot and place them on the foundation. I had some­how neglected to consider that problem, but after a great deal of thought I read about a brilliant method utilizing a steel cable strung between two trees, an 8000 lb winch and a heavy-duty block and tackle. Unfortunately Yukon trees aren’t known for their strength. The trees I selected immediately began to list and slowly uproot themselves from the weight of the cable. The addition of the block and tackle proved to be the last straw and we stood back and watched as the trees majestically toppled into the center of the building site with a whimper.

Well, much like the house itself, it doesn’t look like I’m going to fin­ish this up very fast. But you knew it would take longer. After all, as everyone knows: “Home wasn’t built in a day.”