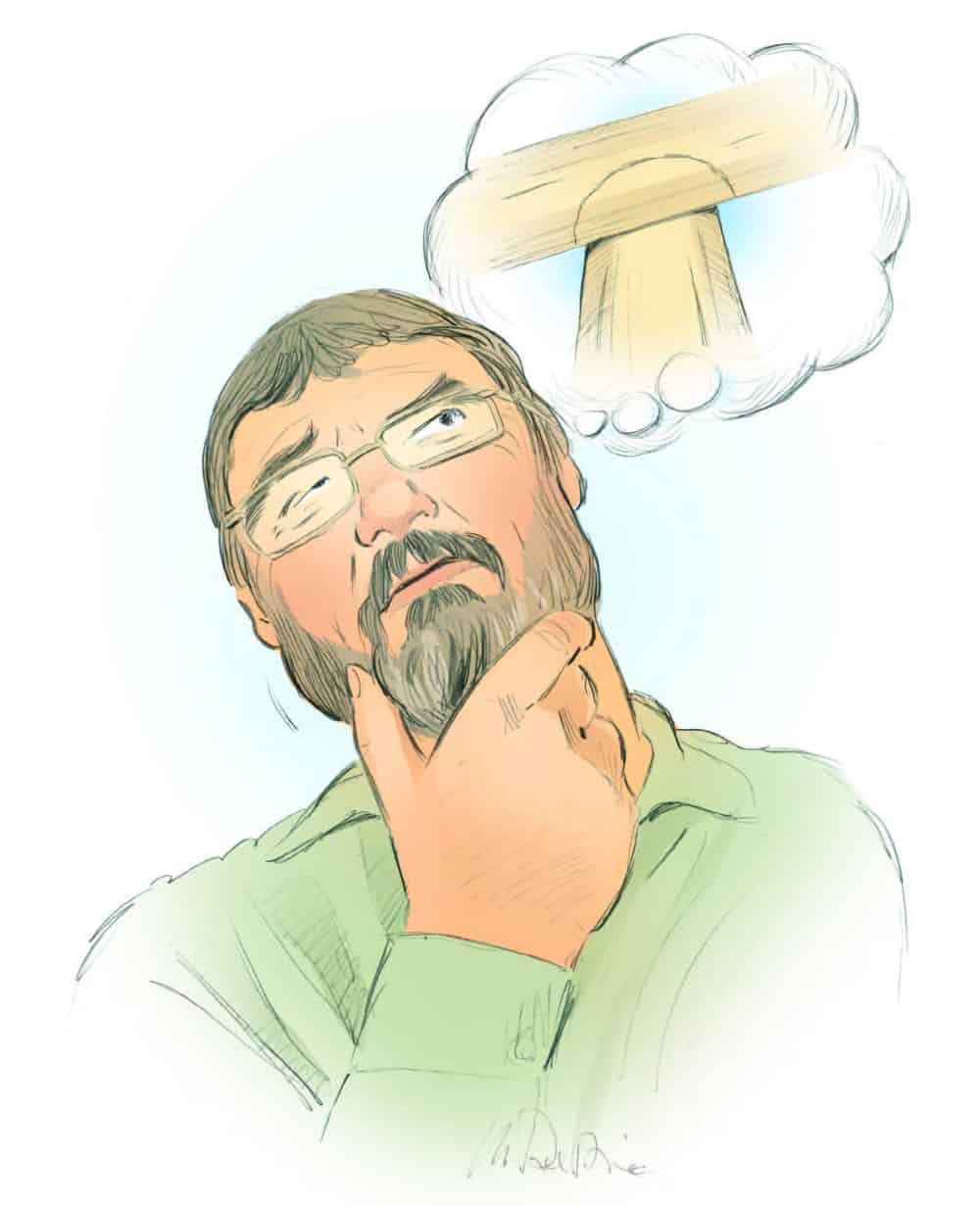 So, I was sitting around in my office the other day and hap­pily perusing my files when I noticed that over the past several Woodchuckle columns I somehow man­aged to carry on at least two completely different story lines.

By the way, when I say “office,” I actu­ally mean “dining room table”, and when mentioning “files,” I am referring to the towering stack of magazine back issues that are threatening to fall over and crush my dog. But I’m a writer and that’s what writers do … we make things up.

But this much is true: I have yet to com­plete the story of how – let alone why – I built a log house in the forests outside of Whitehorse, and if I remember sort of correctly, the second story mentioned something about the renovations I have been inflicting upon my newest house while my wife is away.

So, from what I can remember, at some point I had to leave you in breathless antic­ipation of what was going to happen next in the construction of my house. To tell you the truth, I was fairly breathless myself since I had no idea whatsoever, which is why I ended the column when I did. Since then I have consulted with my wife – who remembers everything I have ever done, whether she knew me at the time or not – and according to her, I had just finished explaining exactly how one would go about scribing a log in order to remove the offending pieces of wood. Maybe exactly isn’t quite the right phrase to use here. Glossed over might be more apt.

But to continue. Once you’ve removed only the wood you actually wanted to, the log is turned back over and adjusted on the lower log to see exactly why it’s not where it’s supposed to be. It’s good to keep in mind that the log you are tossing around weighs more than the average American and may be located many feet in the air precariously balanced on the end walls. Turning such a massive and unwieldy log is not only somewhat difficult but may also be a tad dangerous. This is where brothers-in-law come in handy, if they’re still alive. Unfortunately, mine had long since retired and moved away, so I was left alone to shift those massive logs by myself.

Luckily, someone came up with a sim­ple and quite ingenious tool to help you turn logs over and roll them around. With this tool, even an idiot can handle them, which I’ve demonstrated many times. This tool is called a Cant-hook* and was named by some guy who seems to have been a bit of a defeatist, because you clearly Can.

A word of warning for you who just have to run out and buy one; there is one unfortunate drawback to using a Cant-hook. If the hook should happen to jam in the log as you turn it over, and if you somehow forget to let go of the handle, the log, along with any tool (including yourself) still firmly attached, will heave you clear off the ground at a very high speed and fling you up and over the wall and at least 20 feet down the hill. This depends of course, on whether you are building your house on top of a hill. Luckily for me, I was building on the side of a hill so sometimes I was only flung across the slope instead of down it.

Over the course of a Yukon summer much can be accomplished, as its extreme shortness (four days) is balanced by the extreme length of those days (up to 46 hours during mosquito season) and even­tually, and through no fault of my own, I managed to get all the wall logs roughly where they should be. After that, all I needed was to construct some timber roof trusses, figure out what a roof purlin was and install them and a ridge pole without doing any further, or at least long-lasting, damage to anyone else. Clearly I needed to enlist all my friend to help, mainly because he knew a bunch of people that didn’t know me very well so would be willing to help.

I decided to do it on a bitterly cold Saturday in late December so I wouldn’t have to buy them beer afterwards.