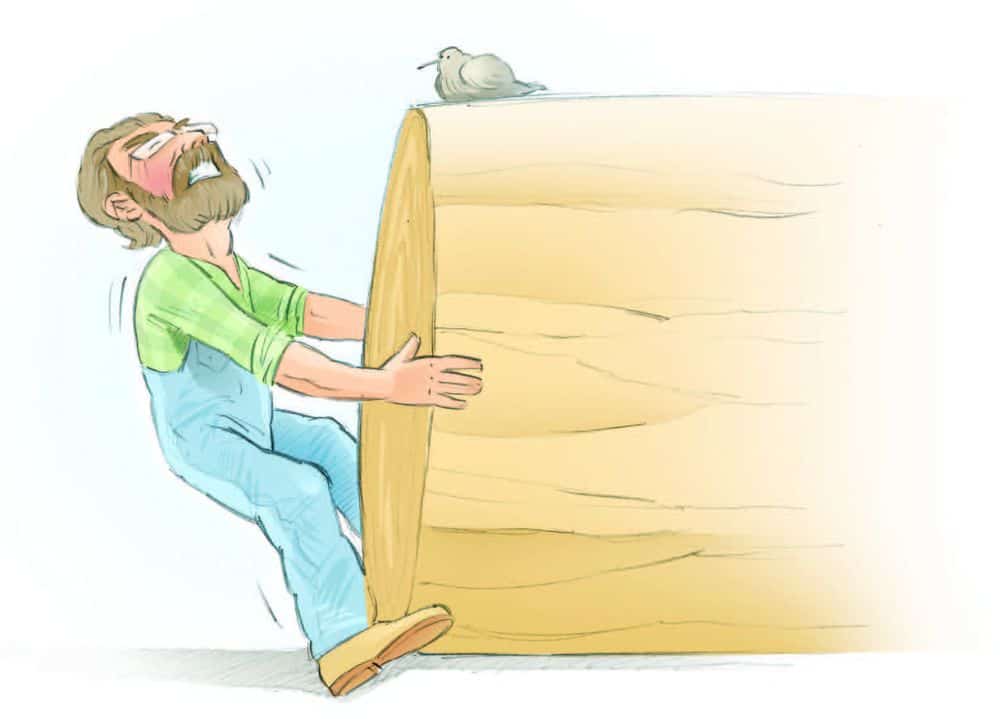 Way back in the August/September issue, my article was Part Two of how I built my log home. For those of you who don’t often use toxic chemicals in your woodworking, you may remember that I hadn’t finished telling the story by the time I ran out of space.

They only give me so much room to work with here and it’s never enough for all I have to say (some people think they give me far too much.) For those of you who do use toxic chemicals, you may wish to re-read the appropriate article. It was in the August/September issue. It was about building a log house. Hint: Canadian Woodworking Magazine. Aug/Sept … It’s probably best if you get out of the shop and don’t play with sharp toys anyway.

Where was I? Oh, yes, building some­thing or other. Give me a minute while I look it up … Got it! When I last left you, I was trying to figure out how to lift 1100 pound logs onto my foundation and stack them into some semblance of a house. My brilliant sky-line system had failed miserably due to the perverse­ness of Yukon trees and I hadn’t yet purchased my crane (yes, someone let me buy a crane). I clearly needed a new system if I was ever going to move my rapidly growing family out of the wall tent I had stashed them in.

Research showed me the ideal system. Research was my neighbour. It wasn’t her real name but that’s what we called her because she owned some books that she had actually read. (That’s why I no longer use the term, “I did some research.”) My wife didn’t like her.

The idea was to plant one of the logs vertically in the center of the building site and attach a heavy pulley block to the top and string a cable from a winch on my truck, through the pulley and then down to whatever log I wanted and drag it up onto the building. For some reason this system is called a Gin pole. Personally, I prefer beer, sometimes a good Scotch. My wife drinks gin but she didn’t help with the house construction.

I dug an 8’ deep hole in the center of the house site and then built a ramp from ground level down to the bottom of the hole. Actually, I dug the ramp the other way so I could get out of the hole. After I got out, I rolled a log to it and pushed it over the edge. Because of the angle of the ramp I had so cleverly constructed, when the log dropped into the hole it was already halfway upright. All I had to do was winch it upright and attach the pulley to the top (in retrospect, I probably should have done that before I raised a 2000 pound log one hundred feet in the air), thread the cable, brace the gin pole to some support trees with some more cable and then start con­struction of the support beams.

Surprisingly, all that went quite well and within a day or two I was ready to place my first log. That didn’t go quite as well. It seems that dragging a 3000 pound log across a construction site and up a ramp is somewhat difficult for one person to do. Even if he does have a winch. It didn’t help that the winch-truck would much rather winch itself up the gin pole instead of a 4000 pound log. I had to lower the truck back to the ground and chain it to a tree just to keep it in place.

Well, it looks like once again I’ve run out of space to finish up and since this is the last Wood Chuckle I’ll be writ­ing, you’ll just have to take a guess as to whether or not I survived and if I did, was the house ever completed.

At this time I would like to thank you both for reading my (semi-true) stories and for all the many cards and letters I’ve received over the past 7 ½ years. (I got four. And one of those was mean.)
And remember: Try to keep as many of your body bits away from the sharp toys as you can. You may need them later.