A new office for an old desk 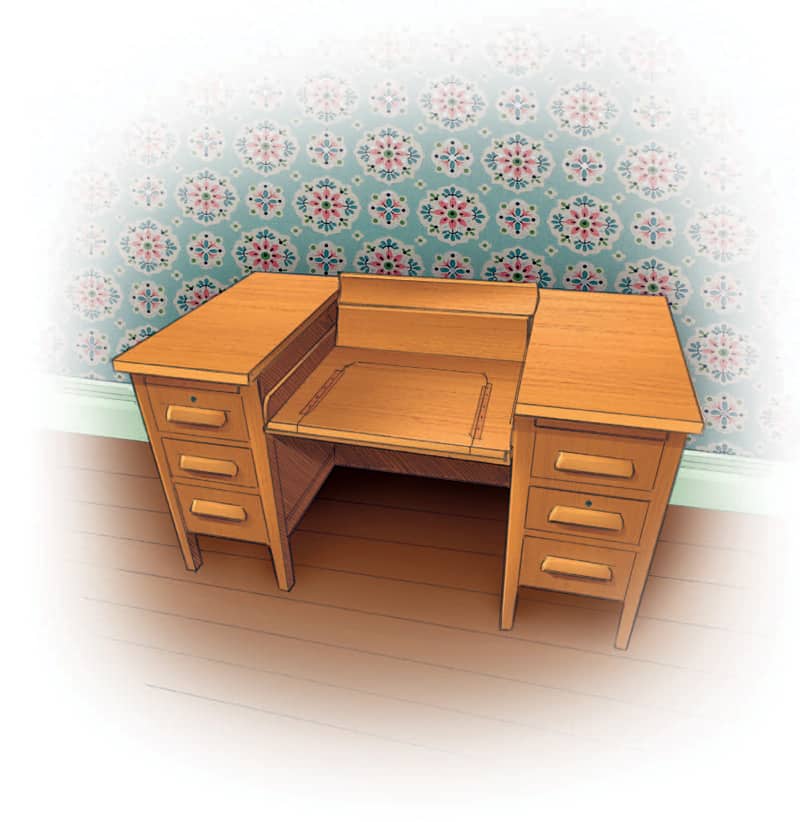 Making the move to a bigger house means I can finally use my grandmother’s antique desk.

Earlier this year my family and I moved out of our small, two-bedroom home in Cambridge, Ontario, to a larger house about an hour away in Wellington County.

The house has many perks over our first one – a finished base­ment and multiple bathrooms (which I’m learning is key in a home with three women). Our two girls no longer have to share a bedroom, and it has a two-car garage that can be modified into a workshop space for me (more on that in a future article).

While the woodworking side of me is obviously excited about the workshop space after spending years trying to work in a small gar­den shed, the writer half of me is probably even more excited about a different room in the house – the office.

It’s been about seven years since I had access to a proper office space. When our first daughter was born in 2015, the room we were using as an office was converted into a playroom. I’ve spent the past seven years or so writing in the dark, damp unfinished base­ment surrounded by cobwebs and with a space heater down around my legs. My co-workers nicknamed it the “bunker” after they first laid eyes on the cinder block walls during a virtual meeting in early 2020.

But now I have an actual office in a brightly lit room on the main floor with its own window overlooking the pine trees in the front yard. I know, I’m spoiled.

But perhaps the biggest perk of the new office? I was finally able to bring my grandmother’s antique typewriter desk from her farm­house in Caledon into my home. She died just a few years ago, but the family agreed the desk should go to the writer in the family.

It’s a beautiful piece of furniture with a hidden compartment under the top that allows the typewriter to be folded away out of sight when not in use. I can’t seem to find a manufacturer stamp or sticker anywhere, and my dad said it’s been around for as long as he can remember.

While searching for the manufacturer, I did find dozens of dates scrawled on the side of one of the drawers going back to at least 1927, meaning the desk is probably close to a century old. My fam­ily likely acquired it at an auction in the late 1940s.
Grandma was a teletype operator for Trans-Canada Airlines (now Air Canada) before she married my grandfather, and she often typed letters and correspondence related to the farm business or for the various charities she volunteered for.

My grandfather would also sit at the desk on Sunday afternoons completing his farming paperwork while listening to famed news­man Walter Cronkite on the television, my dad said.

The desk is definitely showing its age; the wood veneer is chip­ping and peeling in some areas, especially along the back. One of the desk drawers is also missing its lock and the drawers need to be waxed but, overall, it’s still in remarkable condition.
Hidden away under the desk is my grandmother’s grey Smith-Corona typewriter from the mid-1950s. I haven’t tried it out yet, but I know of a typewriter repair shop in Kitchener that I plan to visit in the coming months to see if they can get it working again.

Getting that desk into my new office wasn’t as easy as I expected. After my dad brought it over in the back of his truck, we realized the door frame was a few inches narrower than the desk, so we had to cut the bottom inch off of four of the six legs using a fret saw to manoeuvre it through the door. I let my dad have the honour of sawing through the old desk.

It was a little sad, but on the bright side it led to my first woodworking project in my new home: gluing the legs back together.