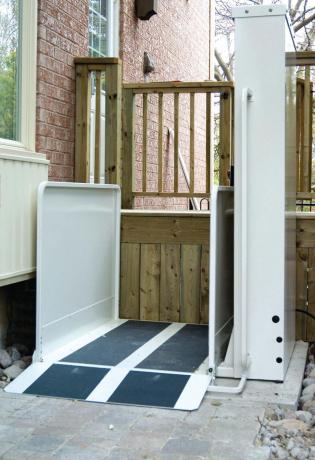 From minor additions to major overhauls, changes to a home are sometimes needed to allow disabled people to live independently or safely. 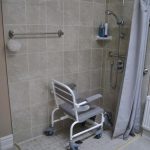 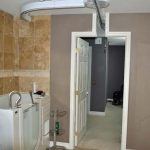 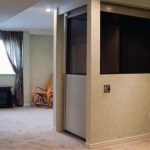 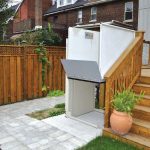 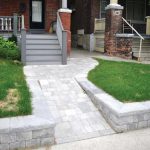 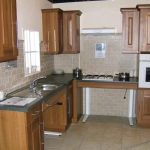 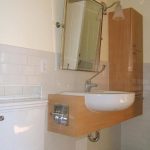 Some type of disability will touch one in two people in their lifetime. Because of this statistic, renovations or adoptions for accessibility have become common home safety solutions. Before considering any of type of renovation, you first need to determine what would work best for safety, independence and comfort. It may be as simple as installing grab bars in a bathroom, or it could be more extensive, like installing an elevator or doing a kitchen renovation.

Interestingly, as I began to write this article, “The Little Couple” came on the TV. The stars, Bill Klein and Jen Arnold both have dwarfism. “The Little Couple” documents their lives, and shows they can do just about anything, but just in a different way. Bill stands at 4′ and Jen at 3’2″. After Bill and Jen looked at ready-to-move-in houses, they noticed many adaptations that would need to be made for it to be accessible for them so they opted to custom-build their home.

Working with a builder, they designed a space that included countertops for their height, floor-to-ceiling windows, an elevator, and a pool that only goes from 2-1/2′ to 4′ deep so Arnold can touch the bottom comfortably.

Showers are Important
This fully accessible shower enclosure allows people to get in and out of the shower with few problems. Grab bars also offer additional maneuverability while inside the shower. 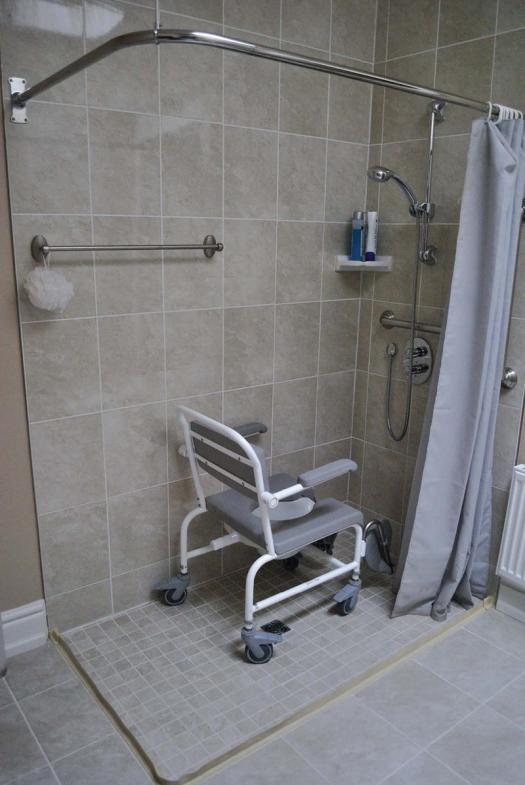 Room Under the Sink
With room under this sink, and an angled mirror, this bathroom is much easier to use while sitting in a wheelchair. 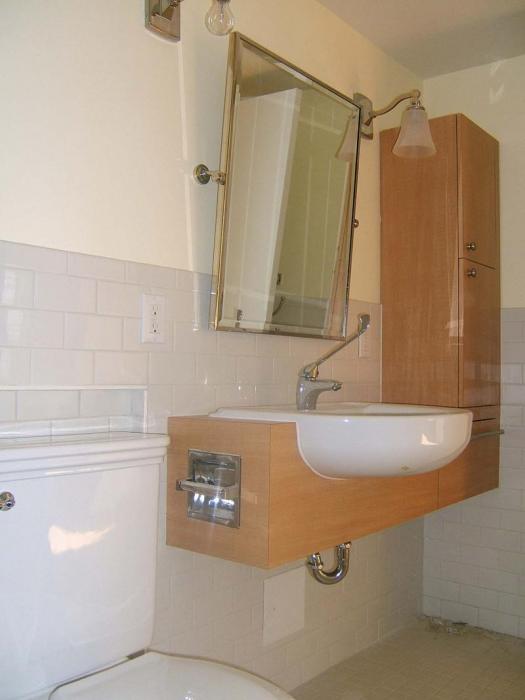 Heavy Usage
Kitchens are possibly the most used room in a house. With open space under two adjustable-height counter tops, access is increased dramatically. 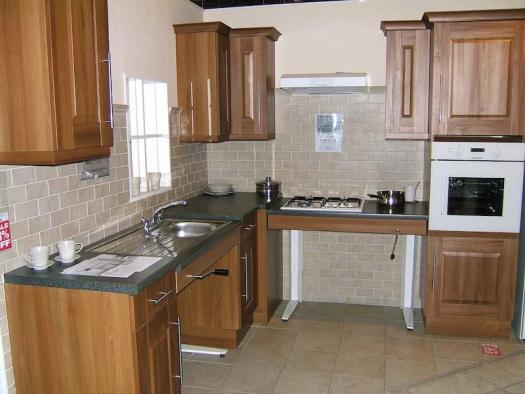 Start at the Street
Ramped paths from the sidewalk allow someone with limited mobility to approach the home, while a lift at the back of the house raises them up to the first floor. 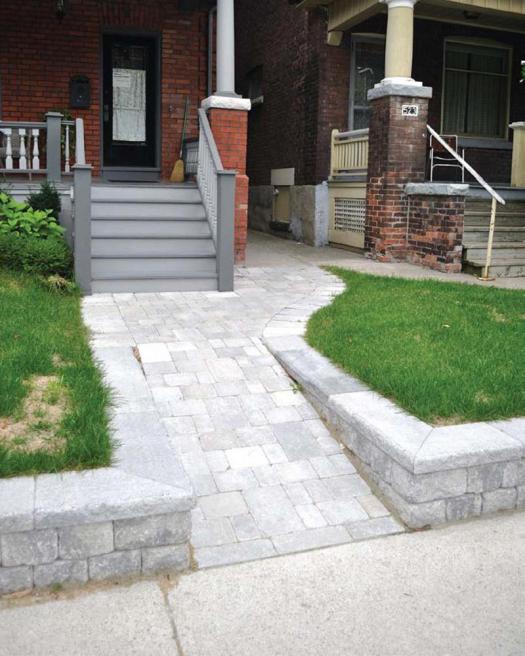 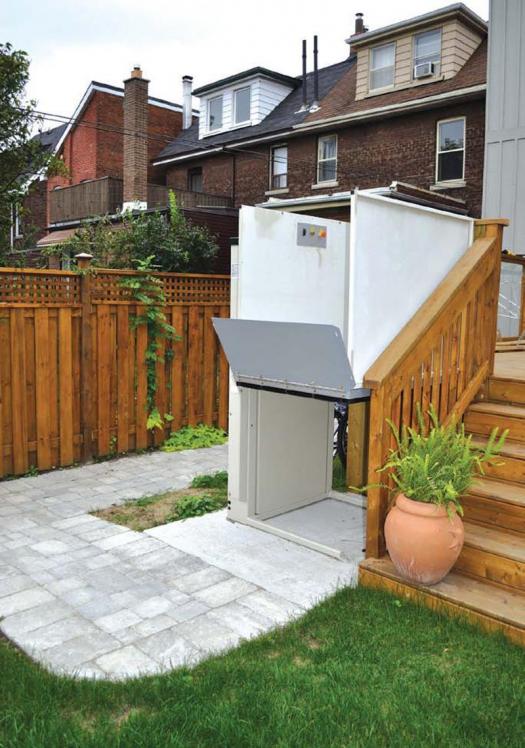 Elevators
In some cases elevators are used to allow people access to multiple levels of their home. 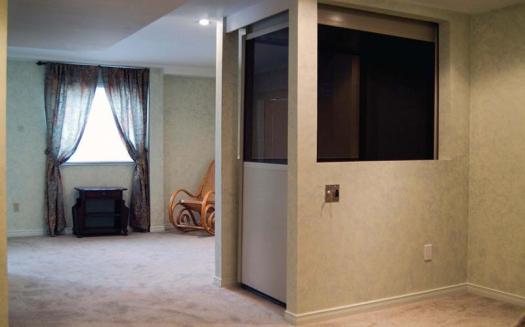 Lift and Track
This ceiling lift will bring people to different rooms in their home. Some appliances, like this bathtub, work in unison with the ceiling lift, to offer the best solution. 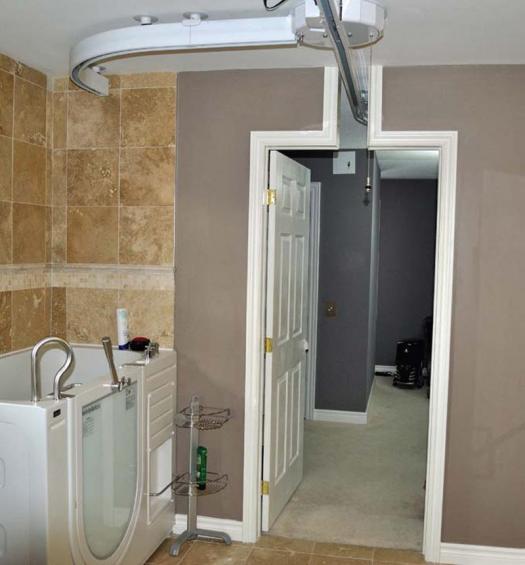 Renovating a home to help maintain personal independence and quality of life are two of the main reasons people renovate their homes. This is the line of thinking that Sue Morgan had when she completely renovated her home to accommodate her needs. Morgan, from Kitchener, Ontario, has multiple sclerosis and uses a power wheelchair to get around. In 1995, only a year after purchasing a bungalow built in 1959, it was renovated to accommodate Sue’s declining mobility.

“It was originally a three-bedroom home, but after the renovation it became a one-bedroom home. We have an additional bathroom on the main floor that has a roll-in shower. The original bathroom is now a laundry room and a small guest bathroom”, Sue says.

Accessible bathrooms not only take into consideration grab bars, but also raised toilet seats and accessible bathtubs and showers. When Sue had her roll-in shower installed about two decades ago, it had to be imported from Britain, as there were no Canadian suppliers at that time. Luckily things have changed.

Sue’s kitchen is now fully accessible, after it was gutted and overhauled. “I didn’t like the accessible kitchen designs available. I much preferred to design one myself,” she says. The kitchen was gutted and replaced with many drawers (including weighted ones for dishes and pots and pans). There are no cupboards to open and get in Sue’s way.

There are no cupboards above the sink, but instead a pantry was installed for easy reach. Two low-level refrigerators replace one standard refrigerator. It took Sue some time to track down stovetop elements that could be installed at the front rather than back. An oven was installed at a height Sue could access.

Some unique features of the Morgan residence are the lowered security peek hole on the front door, a ramped front entrance and lowered light switches. The switches were changed to rocker switches that were easy to reach with an elbow. Closet racks have also been lowered to Sue’s level, as well as the thermostat.

The ReliAble Living Centre (reliableliving.com) is in downtown Toronto. It provides everything you need to make your home barrier-free. This includes kitchen and bathroom renovations, elevators, ramps and more. It also has a training facility to educate building tradespeople, health-care professionals, and the public about accessibility standards. There are likely other businesses around Canada that cater to people who need to make their home more accessible.

Having free range of a two-story home is easy for Carmen Sutherland of Waterloo, Ontario. Carmen has cerebral palsy, which affects her ability to walk, but it’s much easier to get around now that she has had an elevator installed, a fully accessible bathroom and a ceiling lift that has tracking in much of her house.

Making modifications can be an ongoing process, and an expensive one at that. The Ontario March of Dimes, in accordance to the Ontario Ministry of Community and Social Services, has a Home and Vehicle Modifications Program. This program offers funding to qualified children and adults with a disability to make modifications in their home and vehicle. If you qualify, you can receive a lifetime maximum of $15,000 for home modifications and/or up to $15,000 every 10 years for vehicle modifications. Check your area to see if there are similar programs available.

When barriers are removed in the home, it will make for elevated self-esteem, independence and will enhance and enrich the lives of those touched by a disability.

When Melissa isn't writing about kids and woodworking, she's writ­ing on other topics, having a cup of tea or going for a power walk.