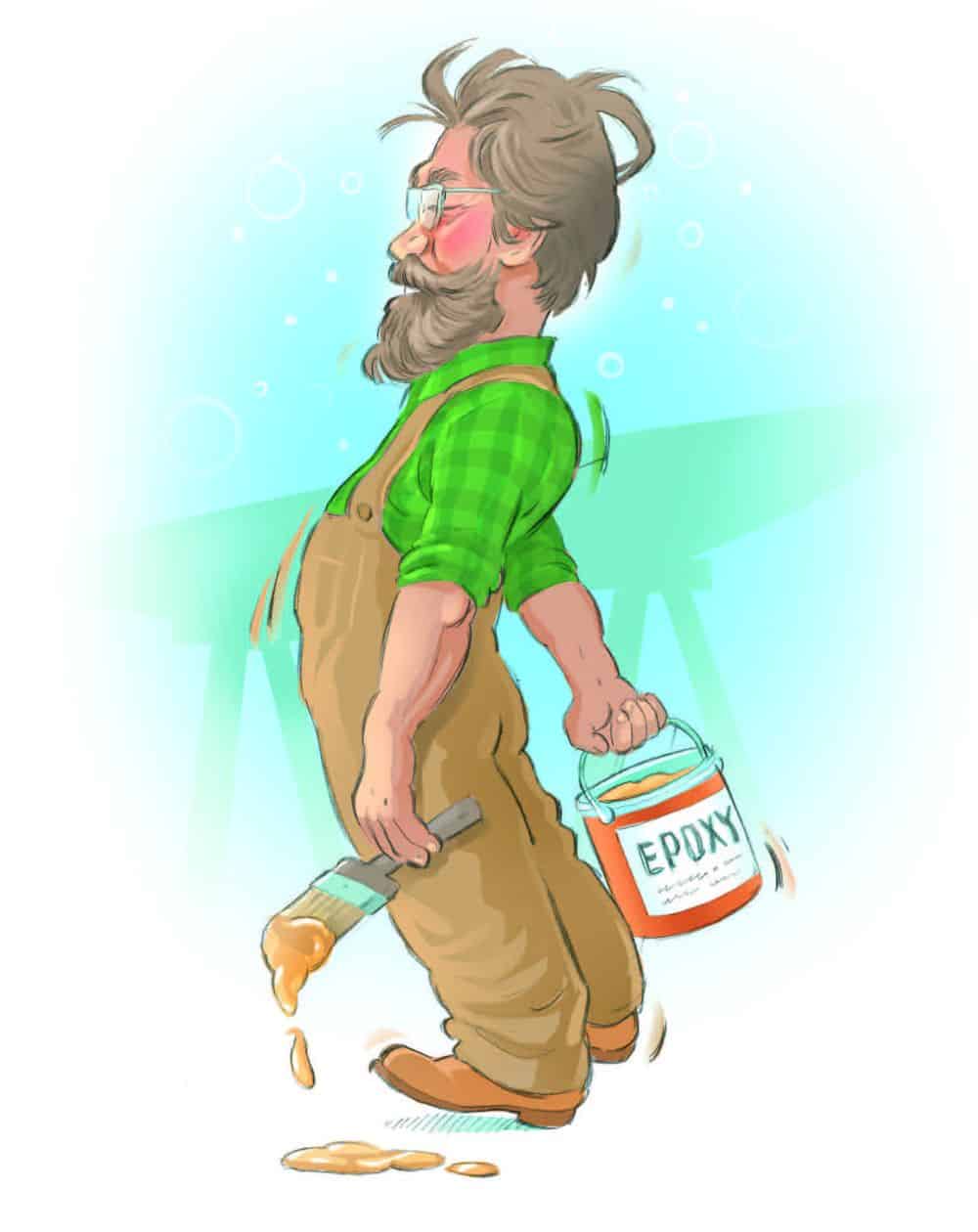 Today, as I write this, it is December 1st. This means that, yet again, I have missed the deadline for submitting my Christmas-themed story.

Now, normally, this could be a problem in the publish­ing world, but because this is Canadian Woodworking Magazine and I have a very understanding editor, I’m not going to let it bother me. Besides, it’s his fault for not giving me a heads-up as to when the real deadline was. And another besides: this way I can finally wind up the kayak story. That is, unless I’ve used up too much of my word count with this preamble. (They only allow me so many words per article before they start deducting from my pay; I still owe for an article back in 2013).

In the last issue, as far as I know, I had successfully completed drilling the several thousand tiny holes needed throughout the mahogany plywood hull and deck. I assumed with that many holes to choose from, at least some would be more or less in the correct location. Time would tell. As would any possible leaks. Maybe I’d let The Boy test-paddle it first. After all, this kind of situation was the very reason we had him in the first place. And he did fairly well testing my hang-glider, I recall, even if he can’t.

In spite of everything – and by “every­thing,” I mean me – the kayak ended up looking pretty much like a kayak is sup­posed to and I was ready to apply the fibreglass that should bind the entire thing together and hopefully make it a viable and float-worthy craft. I was confident that with enough epoxy, it would float. Heck, with the amount I used, pretty much anything would float. Well, maybe not your average American, but anything else, for sure.

Unbelievably – and I still have a hard time with this – the fibre-glassing went without a hitch and by the end of the weekend I was totally whacked out of my mind. (A little hint for those who wish to build your own kayak: Don’t do it in a basement without lots of venti­lation. And be sure the tiny blue hippos stay out as well, even if they are wearing their tuxedos.)

A few more weeks went by as I attached lines, fitted the rudder and installed the seat. Finally, the kayak was ready for its debut sea trials and I anxiously awaited the coming Thursday. (That was the day my new life insurance kicked in.) In the mean­time, I had to somehow get the kayak out of the basement.

After carefully lifting the gleam­ing masterpiece from the cradles that, well, cradled it, I backed the boat out of the room and promptly ran it through the glass doors in the dining room. Apparently backing out wasn’t going to do the trick. I attempted to swing the bow around to make the turn into the hall and discovered that it’s fairly awkward to turn a 19′ boat around a 90° corner into a 3′ wide hallway. And don’t even think about going up the stairs. In retrospect, it might have been a good idea to consider these issues prior to building the boat in the basement.

Luckily, I had an alternative solution. No, two. No wait, three. The first two, Kelly promptly rejected. Apparently I can’t be trusted with a jackhammer or a chainsaw.
She then pointed out with great derision, and what I considered an unwarranted air of superiority, that there was a window located above the kitchen sink. According to her infinite wis­dom, the kayak could be carried straight through the dining room, into the kitchen and then right out the window.

I’m still not sure exactly why I was so happy when, after measuring the width of the kayak, I discovered the window open­ing was precisely about two inches too narrow. I gleefully pointed out this flaw in Kelly’s suggestion.

Then Kelly pointed out that I owned not one but two recip saws. Surely one of them should be able to remove the window frame from the concrete opening. Sure enough, she was right once again and almost too soon, and much too easily, the window was out and the kayak slipped gracefully, and with surprisingly few scrapes and/or swear­ing, through the opening.

Okay, I admit it, Kelly is smarter than me.

Maybe I’ll let her be the first to try out the kayak, as her reward.