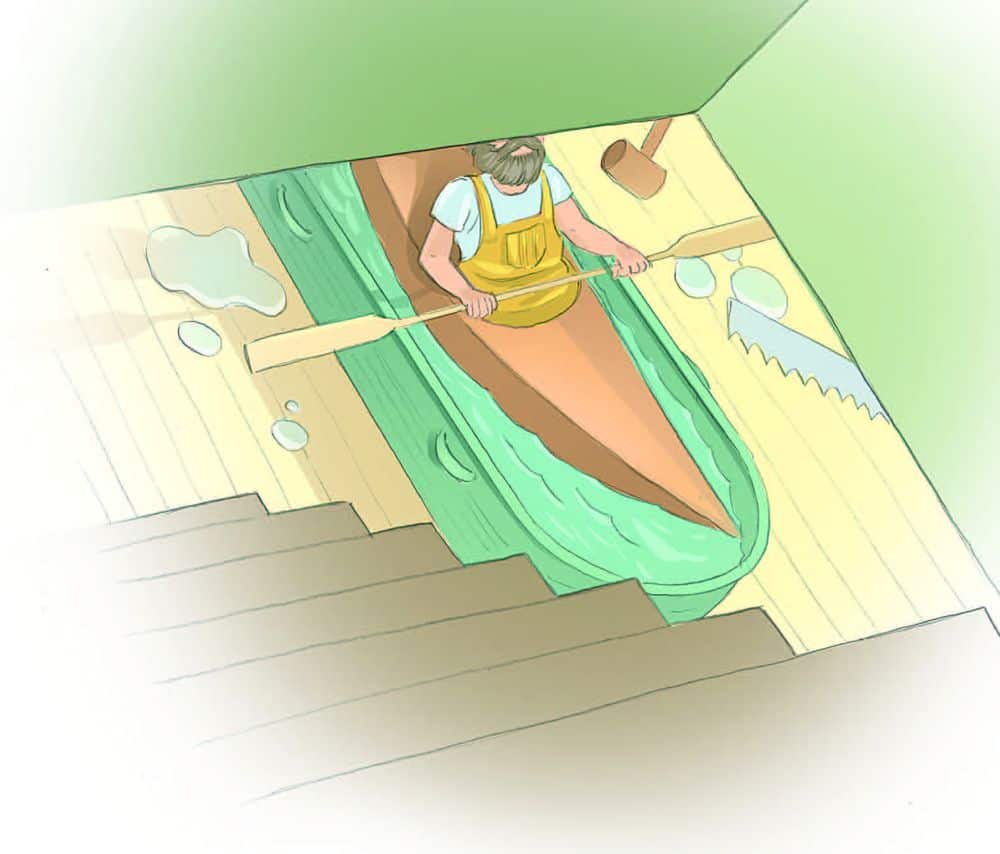 A few years ago this magazine changed its name to Canadian Woodworking & Home Improvement Magazine. This change opened up an entire world of stories for me – some of which are, or may, actually be true. Well, to be honest, every single article I’ve written here has been absolutely true. Or at least based on a true event. Or maybe just as I choose to remember them.

But because of this change I am now able to combine my two favourite pas­times … or rather, two favourite pastimes that I can actually talk about in a fam­ily magazine. In no particular order, other than from first to last, they are: (A) woodworking stuff, (B) boat build­ing, and (C) home renovations. Now, even though the magazine uses the term “Improvement,” I think it best if we forgo that term since neither my wife nor my children are totally convinced that whatever I have done can truthfully be called improvements. (Personally, I think that can apply to the children as well.)

Now, most normal people wouldn’t think it possible to combine home renovations and boat building in the same project, but those people would be wrong. I, if not the house itself, am here to tell you that with a little deter­mination, a Sawzall and a very large sledgehammer it is possible to do all kinds of damage, and even end up with a reasonable facsimile of a boat.

When we first bought it, the house contained a downstairs suite, but because I’m essentially antisocial I evicted the basement dwellers as soon as we moved in. This left me with a very large and empty space to do with what I wanted. According to my wife, I wanted a boat! Also accord­ing to my wife, what I really wanted was a kayak so that I could chase her around the Kawartha Lakes every weekend. Since she had informed me this was what I really wanted to do, I had to figure out which model she would say I wanted. Since my previous foray into cedar strip canoes hadn’t exactly been a rousing success (Aug/Sept 2008) I decided a plywood stitch-and-glue style was just the ticket. For weeks I perused the cata­logues before I found the ideal kayak. One that ideally wouldn’t try very hard to drown me.

The chosen design immediately pre­sented me with a bit of a challenge. If I was to build it correctly, the finished kayak would be almost 19 feet long. Although my garage was double that length, it was currently occupied by a dismembered Landcruiser, a lathe, a table saw and many other assorted tools, some of which I actually considered using on occasion. Besides, winter was coming and the lousy little woodstove wasn’t large enough to keep my axe from freezing. Or any of my other tools, for that matter.

My only option was to build the boat in the house. I was fine with that but for some reason my wife wasn’t. Some silly concern about spilled glue on the oak flooring, I believe. This was unfortunate because the space between the dining room and the living room would have been ideal. As long as no one wished to watch TV or eat sitting down.

Luckily, my wife recalled that we owned a huge, empty basement. Unfortunately, the only suitable length was down the hallway and that was only 32 inches wide. Even with my svelte physique I wouldn’t be able to work in those conditions. Nope, reno­vations were needed if ever that boat was to float the waves of Georgian Bay. Actually, I was kind of hoping it would float in pretty much any lake, not just Georgian Bay.
While figuring out where exactly I could build the boat, I had noticed the basement apartment happened to have a kitchen and a dining room. The wall between the two was an issue, however. I figured with the precise and care­ful application of a sledgehammer, the offending wall could be smashed into tiny pieces, thus making one large room suitable to build a boat in. It wouldn’t be suitable for much else but what the heck … we planned on moving anyway.

Tune in next month to find out if I ever finished the boat, if it actually sailed, or if it immediately sank and I totally drowned on the maiden voyage of the S.S. Holy-Crap-That-Water’s-Cold.