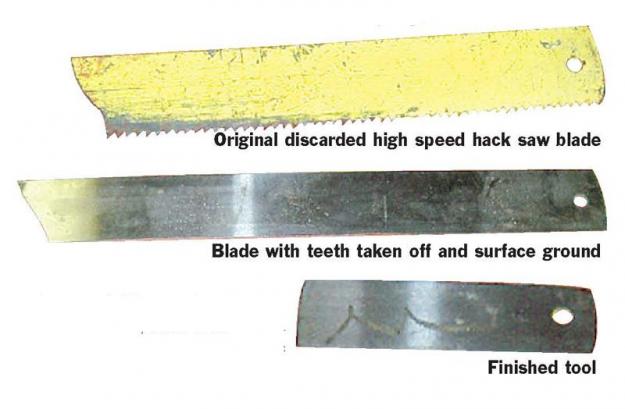 Sooner or later, most woodworkers have the pleasure of using a traditional cabinet scraper. Then comes the filing and the burnishing, to re-sharpen the tool. 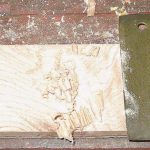 After the initial thrill of using such a time honoured tool wears off, a fellow can get a little tired of the constant effort to keep the tool sharp and cutting correctly, especially when working with hard or abrasive woods.

There is no doubt that cabinet scrapers give a very fine finish. I have found that a scraped finish shows the grain and beauty of the wood better than if it is simply sanded. I have also found the sharpening and maintaining of a scraper’s edge, to be time consuming and tedious.

In the early eighties I was refinishing a lot of antiques. Many of them were heavily covered with numerous coats of paint. I discovered that if I took an old file and ground down the tip, I could chip huge amounts of this paint off the wood simply by using it as a dry scraper. If the original finish were still largely intact, the newer layers of paint would come off fairly easily. Seeing this, I then had someone surface grind the flat areas of the file to give a smoother edge. When I ground it on my 6″ grinder, the working end of the tool assumed the shape of my grinding wheel. In other words, it became coved. Grind any piece of steel on your grinder and you’ll see what I mean.

What I ended up with is a piece of a high-speed steel hacksaw blade with the teeth taken off and then surface ground.
The blades are about 18″ long and some as much as 2 1/4″ high. They are about 1/16″ or 0.062mm thick. Some have been ground down much more. Thinner is better.

Experiment a little, and you’ll find that these scrapers can be used for more than just scraping wood. They make excellent scratch beaders, when ground to shape and held in a makeshift holder. Mine is made out of a block of hardwood and a piece of split dowel. Grind them to the shape of a moulding and you can remove paint from the original. Not only that, you can use it to form (and then replace) missing parts of moulding. Use your new scraper to remove a dried glue line, remove burn marks, or level a seam that’s slightly askew. They also make excellent carving and whittling knives.

An 18″ blade can be broken into three or four parts, depending on the requirement. To break high speed steel, grind a mark across the blank with your grinder, wrap it in cloth to avoid flying pieces, and whack it with a hammer. The steel will break on the grind mark. To grind, use a 6″ aluminum oxide wheel on your grinder. I generally run them through pretty fast so that I don’t heat the tool too much and ruin the temper.

Keep water handy so that if you see a colour change you can dunk it quickly. It doesn’t take much to put a new edge on the tool. Lay them flat on the tool rest and always on the same face. Keep the one face marked, so it’s always the same. Otherwise, you’ll have to re-form the edge every time you sharpen it. This method actually gives two different edges on the scraper, one finer than the other.

These scrapers work well on hard maple. They are particularly handy when shaving down figured wood, as it can be held at an angle to the grain pattern to flatten the board. By doing this, you don’t end up with waves on your stock at the hard and soft areas.

I work with some extremely large pieces of cherry burl. Many would flatten them with a stroke sander or other machine, but I prefer my scrapers. It is much more work, but the finish I end up with is better than if it were sanded. In fact, I often use them on sanded surfaces to remove the sanding marks.

Access to a surface grinder is handy but not totally necessary. Working in, or having a friend who works in, a machine shop that uses a metal cutting saw can be an asset, because often when their saws get dull they simply throw them away. If not, then you might have to go out and buy a new unused saw blade. What you are looking for is a metal cutting straight saw that cuts about a one sixteenth inch kerf. You might find them thicker but they don’t work as well. The best I’ve ever used were around thirty thousands of an inch thick after surface grinding.

In conclusion: If you have ever turned away from using a cabinet scraper because of the amount of work it takes to keep it sharp, I hope that this alternative will help you appreciate and accentuate the beauty of wood in your projects. 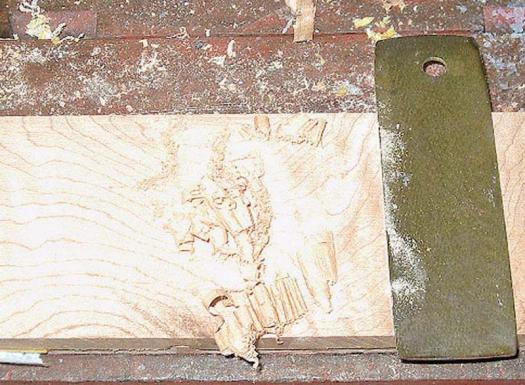