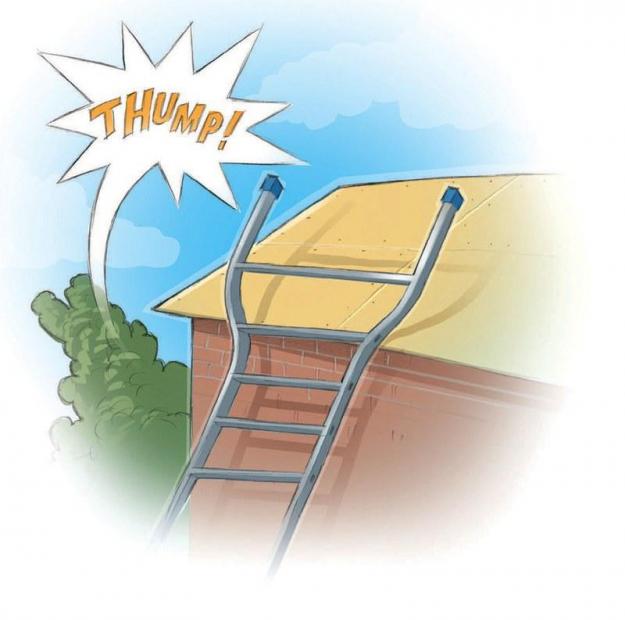 As I sit here on my deck in my robe sipping my first cup of coffee of the day and enjoying the oc­casional scream or cry of pain emanating from my neighbour Carl’s house, I realize that I really enjoy Februarys. The warm gentle breeze wafting down the moun­tainside ruffles the surface of my coffee before it gently rips the shingles off Carl’s roof and sends them flitting through the air like so many demented starlings.

To say Carl’s house is a work in progress is like saying the complete res­toration of Rome’s Coliseum would be a work in progress … but  hopefully cheaper. Carl’s projet-du-mois (proj­ect of the month) is replacing his few remaining shingles. Needless to say, Carl knows absolutely nothing about roofing other than it’s something that’s supposed to be over his head, which he’s clearly in, and it’s supposed to keep most of the weather out, which it clearly doesn‘t.

Carl had begun his latest project the same way he begins all his projects – and most of his conversations with me – by asking  if I could help him. Once again I had to disappoint the poor boy and assure him I knew absolutely nothing about roofing. I felt it in my best interest not to inform him I was once a roofer in a former life. His little face screwed up in disappointment; he then went on to ask if I could loan him a “climbing thin­gee.” I decided to loan him the ladder with the really wide outriggers.

I also suggested he might wish to bor­row a hammer to assist in fastening the new shingles to his roof in some man­ner. I then foolishly suggested he use a chalk line as well so at least a few of the shingles would be laid down in a reasonably straight row. Then I had to explain it was used to “snap a line.” My word choice proved to be a mistake when he soon returned asking for more string because the chalk line ran out after “snapping” his very first line.

After Carl finally left with the major­ity of my tools, I poured another cup of coffee, picked up my book and sat down for a peaceful afternoon immersed in the peaceful exploits of the Canadian Army during the Battle of the Somme.  Every chapter or so I would hear an “Oh! Crap!” followed by a brief slithering noise, then a short moment of silence preceding a muffled thump. Several sec­onds would pass before I would hear a painful, and slightly breathless, gasp – “I’m alright” – emanating from the Pachysandra bush.

It took three or four flights off the roof before What’s-Her-Name no lon­ger bothered to rush to the door to check on him every time he thudded to the ground.  I noticed, however, that she had at least opened a win­dow to listen for his painful assurances that he was still amongst the living. I was beginning to think it might have been a mistake to loan Carl a ladder capable of raising him more than, say, three feet off the ground. At least not without sending him to Ladder Climbing University first. The BC Government probably has just such a school for its employees.

After hearing Carl thump to the ground for the third or fifth time, I became curious as to how even he could possibly fall off such a gently sloped roof. Heck, a rubber ball would have had a tough time roll­ing off that roof. I discovered part of the problem as I walked around the corner of the house and saw Carl’s ladder tech­nique. Apparently, my first mistake was to believe he was even capable of using a lad­der because in his great cluelessness he had placed the ladder upside-down.  According to Carl, with the ladder upside down, the wide part with the outriggers allowed him to stretch sideways much further without going through the whole bother of climbing down and moving the ladder over. It seems that Carl was afraid of climbing up and down but was fine with leaning. I grabbed the ladder just as it began another inevita­ble slide and ordered Carl down.

It seemed that if I was going to keep Carl as a neighbor – and, Lord, I have no idea why I might want to – I was going to have to come out of retirement and teach poor dim Carl how to re-roof his house.