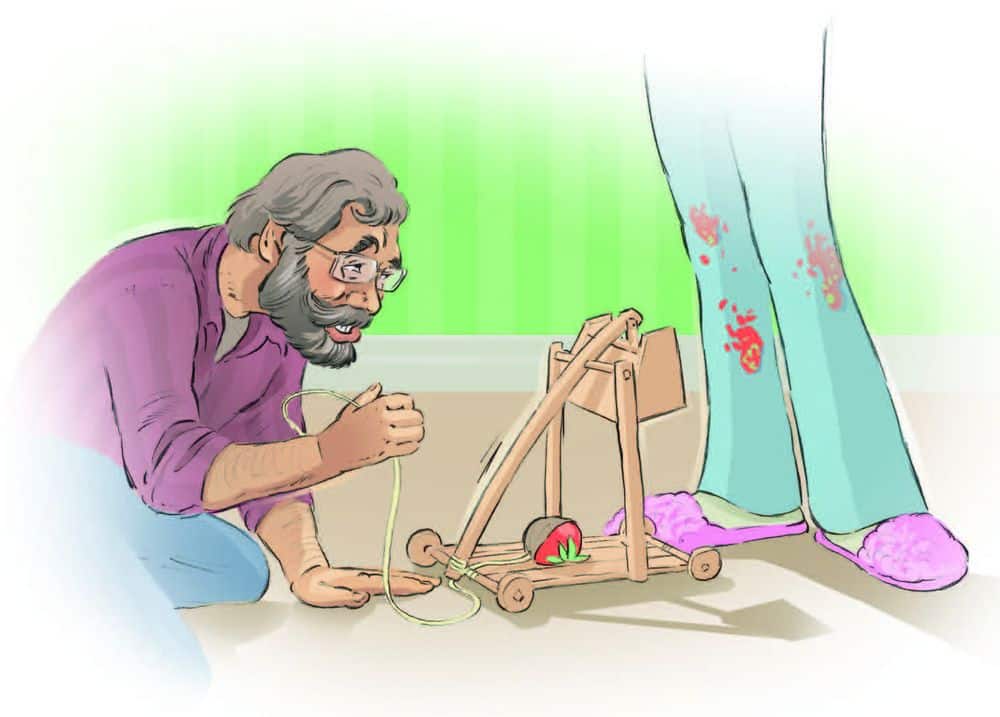 I have three children. I don’t sup­pose I should refer to them as children anymore since I now have four grandkids who are older than they ever were. While it may be true that I like them dearly, like all woodwork­ers who are blessed with a houseful of children (or cursed, depending on your particular viewpoint), I was constantly being bothered to build one thing or another for the wee beasties.

My Number-One Daughter requested a corral and stable. Although such an undertaking is a major project, I had the necessary abilities to do so, so I did. Then she asked for a horse.

My Emergency-Backup Daughter’s requirements were simpler. She only requested a sword, a helmet and a spear. Strange sort of child but I made her what she asked.

Many years later when it came time to move, I discovered not only the hel­met, sword and spear under her bed but also every carving I had ever made that I didn’t like. Destined for the woodstove, out of pity she had rescued them all and hidden them under, over and in her bed. We could have heated the entire house for a month with those stupid carvings.

The Boy’s requests were a little more mundane than those of his sisters. All he wanted was a machine gun. Not just any machine gun but a Thompson machine gun like the old-time gangsters used. And a .45 calibre pistol to acces­sorize. And a bow. A knife or two would also come in handy. I made him one of everything except for the knife. I just gave him one of his mom’s steak knives instead. It was easier.

A few years later he requested a cedar strip canoe. Unfortunately, with just a few short months needed to finish it, an accident in the shop com­pletely destroyed the thing. As a sop he requested a full-size working trebuchet so we could send large boulders over the hill to try and hit our neighbour with. She was a bit of a (w)itch but even I had to draw the line at that. A half-sized model was the best I would do. To which my wife quickly drew her line.

Behind the house I built the jungle gym set I had always wanted. I found an old tire from a large piece of earthmov­ing equipment that someone had left lying around and using my Landcruiser winch I hoisted it into the trees and sus­pended it from a large branch. All three kids and their mother could safely sit inside the thing and swing. Inside was the only safe place to be as it weighed so much that it would crush anyone that got in the way. Large men would be flung halfway across the yard by a single sideswipe. It was great.

I then built a zip line between two more trees and a platform I had sus­pended high off the ground. As far as I know (or care, if truth be known), no one was ever injured while playing on the setup. In fact, I never actually saw anybody playing on the thing at all so after a year or two I tore the whole structure down. They’re still mad at me for that.

As the kids got older I had to come up with ever more elaborate toys for them (me) to play with so I built a large-scale model of a Tigermoth biplane they could sit in and shoot down passing ravens, migrating geese or whatever. It sat on the front porch for years until the winter snows finally destroyed it.

Once he got old enough to think, The Boy came up with a plan to install a troll­ing motor into an old kayak and with the addition of a conning tower and deck gun turn it into a WWII German U-boat. We forgot it behind the garage when we moved from Ontario.

My children are all grown up now and have moved away, possibly just to get away from me. But one of them has fool­ishly given me grandchildren to mess up so my son and I built my grandson his very own tank. It’s not a very power­ful tank but that doesn’t matter much. If you’re the only kid in town with their own personal tank it doesn’t need to be all that powerful.

At least not until some other kid gets his dad to make him a cannon.