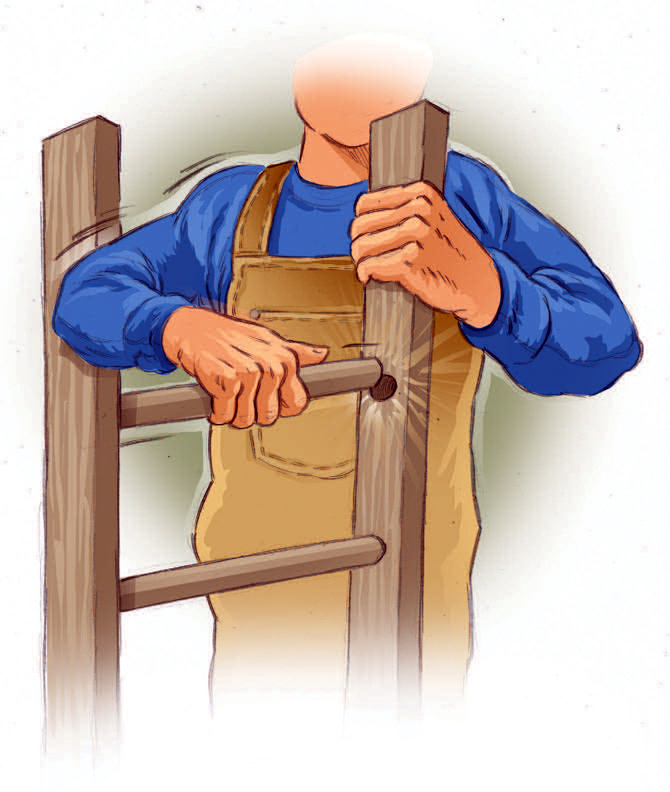 I tried making a blanket ladder. See if you can tell where I went wrong.

Last summer I demolished the decades-old shed in my backyard to make way for a shiny new one. Most of the old wooden structure ended up in a dumpster, but I couldn’t help but save about half a dozen 2×4 roof raf­ters from the same trash bin fate. The shed roof had been leaking for years, so the wood had some nice weathering and wear, but the pieces were also still plenty solid with just a bit of rot at the ends.

I knew I could build a nice, rustic project with the seven-foot long boards – I just needed the right idea.

After a year of sitting on a shelf inside the new shed, I finally had some inspiration just before Thanksgiving. I decided to build a sim­ple blanket ladder for my wife, and maybe post the photos online to help spark some Christmas gift ideas among friends and family.

But I’ll tell you right now, my initial attempt didn’t work out; the ladder ended up out of square and didn’t sit flush against the wall. Follow these steps, and see if you can pinpoint where I went wrong.

First, I had to sort through the lumber and find pieces that weren’t too warped. I’d already discarded the ones that were rotted or extremely warped, so it was a fairly simple process.

Next, I pulled out the remaining nails that lined the 2″ wide por­tion of the boards. I was excited about these old nails because they had left weathered rust spots along the wood, resembling old barn boards. My hope was to preserve this look with a gentle sanding.

I cut the boards to approximately 5′ in length and put a 10° cut on the bottom, so the ladder would lean against the wall to support the blankets. I sanded the wood with 120 grit sandpaper to knock off the rough edges, and again with 320 grit to get it nice and smooth.

Next, I measured 12″ up from the bottom and marked the middle of the 4″ wide section of the board for the first dowel. I measured up another 12″ and placed another mark. I did this for a total of four dowels.

The dowels were 1-1/8″ in diameter and 18″ long, since the thickness complemented the thickness of the 2×4 nicely. I drilled completely through the wood using my hand drill and a spade bit, being careful not to create too much splintering or chip-out.
It was a tight squeeze to get the dowels into the holes, and I ham­mered them into place by placing a chunk of scrap wood on top of the dowel so I wouldn’t damage it with my hammer.

When I went to place the second 2×4 on top to finish the ladder, though, I ran into a problem. The dowel holes weren’t straight, and it took a lot of force to get them into their corresponding holes. Once I managed to get them into place, the ladder was no longer square, and wouldn’t lean properly. It wasn’t off by much – probably just a few millimetres – but the impact was drastic.
Can you tell where I went wrong?

Cue the cinematic rewind sequence where we go through the entire process in reverse, and stop at the point when I started drilling the holes.

You may have guessed it already, but the problem is that I don’t own a drill press, so I decided to try making the holes with my hand tools. Unfortunately, and despite my best efforts, the drill didn’t go straight into the wood, and even the slightest angle meant my dowels wouldn’t line up and the entire project would be out of square.

So, while this one project may be bound for the campfire scrap pile, I did learn some valuable lessons along the way. The first is I need the proper tools, like a drill press, if I want my projects to be good enough to sell.

Another is that aside from the problem with the dowels, the overall project looked pretty good and I’m confident people might actually want to buy these from me in the future.