Designing a ‘whale’ of a desk 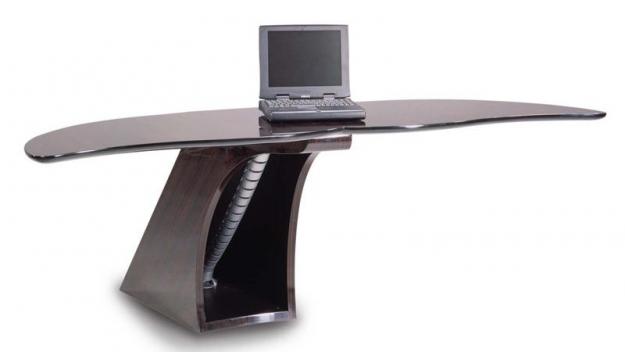 One of Canada’s most skilled furniture makers gathers inspiration for his next piece from some of the most unlikely sources. Here’s the inside story. 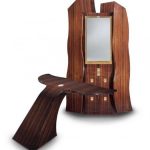 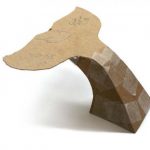 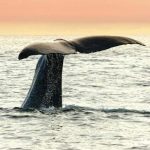 A number of years ago, my daughter was working on a school project about whales. Her writings contained all the standard textbook information, such as “whales are the world’s largest mam­mals, they live in the sea, they eat fish or plankton, and they are endangered.”

While doing this, she asked what I knew about whales. I told her that when a whale turns up dead in the St. Lawrence River, its carcass is so con­taminated with pollutants that it has to be handled and disposed of as toxic waste. Her eyes went wide as saucers and her whale project evolved along a whole new tangent. The resulting discussions led to a promise that we would take a trip out east the follow­ing summer to see some real whales, up close and in the wild.

Right around this same time, I received an invitation from Forest Stewardship Council (FSC) and World Wildlife Fund to build a display piece for the Forest Leadership Forum being held in Atlanta, Georgia. Given that the show was focused on protecting the world’s forests, I was challenged to come up with a cool idea for a piece of furniture that was made in a sustain­able manner.

The Inspiration
The typical form of a whale’s tail as it dives underwater wouldn’t bring a desk design to mind for many. Wiggers wanted to make a piece of furniture that would speak to environmental issues, as well create a striking piece of furniture. (Photo by dreamstime.com) 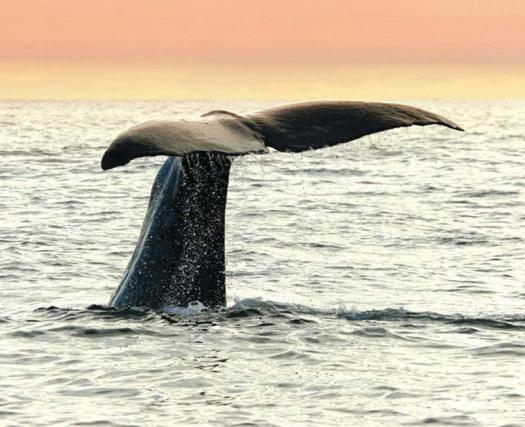 A Quick Mock-Up
As soon as Wiggers had the idea to build a desk in the form of a whale’s tail, he immediately built a cardboard and masking tape mock-up to fine-tune the design. (Photo by John Wiggers) 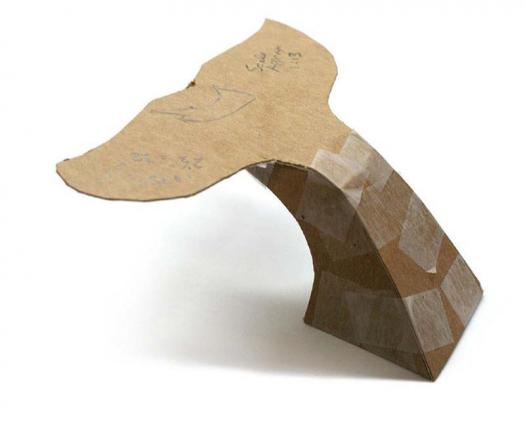 The Final Result
The desk, along with a credenza, ready for display at the Forest Leadership Forum in Atlanta, Georgia. 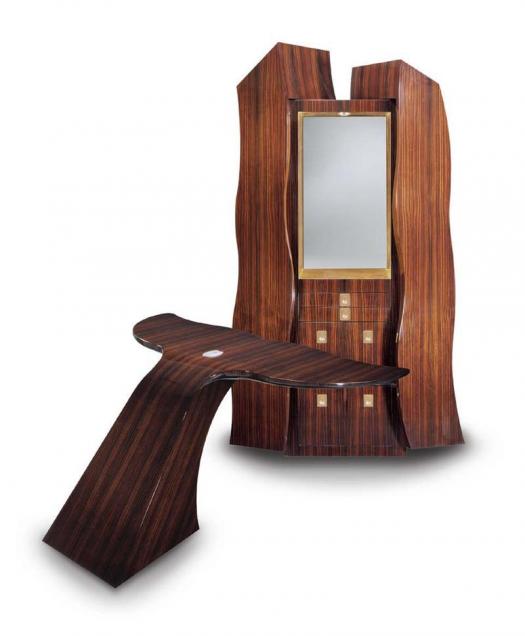 For several months, I wavered about whether to even participate in the show. Quickly, my procrastination turned into a deadline and I was now stuck with the furniture designer’s equivalent of writer’s block. Nothing clever was man­ifesting in the way of ideas, although I had concluded that I should make a desk of some kind.

Then one night on television I saw actor Pierce Brosnan, who worked with the FSC, speaking on behalf of saving endangered whales. The connection of Brosnan to both whales and FSC sud­denly melded with my idea for a desk, and everything came together in a flash. Grabbing a pencil and a thin piece of cardboard, I scribbled out a quick rendering of what a whale’s tail would look like as it breeched. I then cut and taped the pieces together to form a scale model. This model was then scaled into working dimensions, and the building process began.

The main face of the torso and tail started as an oversized T-shaped slab of certified 1-1/4″ veneer core birch ply. Since this T-shape was larger than any available standard sizes of plywood sheet, it was necessary to butt-joint two pieces together to make the fascia por­tion of the top and lower torso.

To conceal this joint, a diagonal cross-band of maple veneer was applied between the core slab and the macas­sar ebony face veneer. After roughly cutting the basic shape to size with a jigsaw, this slab was then placed on a sliding table saw to cut relief kerfs into the underside, where the torso would bend to meet the top. The resulting offcuts from cutting the “T” to size were saved for use later to build up the apron on the leading edge of the tail. I then crafted a pair of plywood side gables from the same veneered 1-1/4″ birch plywood, and made notched tabs that would allow these sides to extend underneath the top for support. The leading edge in front of the tabs were then mitred on the sliding table saw, to align with similar mitres that were also cut on the vertical torso portion of the T-shaped slab. Rabbets were then cut into the bottom edge of the side gables to receive a 1″ thick plywood floor.

The mitres were then glued and joined on a bench, with an internal spline added for strength. While the glue was setting up the plywood floor was glued in place. Once dry, the leading edge of the tail was built up with the 1-1/4″ thick plywood off-cuts saved from earlier. The purpose of this thicker apron was to provide both strength and aesthetic symmetry to the desk. This plywood was then sculpted by hand to create a soft, tapering edge around the perimeter.

Because of the imbalance of this can­tilevered design, it was not possible to counterbalance the desk so it could sup­port itself. Therefore, the structure was engineered to be secured to the floor using lag bolts.

Loose voids and chips in the plywood edge were filled with fibreglass putty before all surfaces were sanded smooth. After a thorough sanding all exter­nal surfaces were finished in multiple layers of high gloss low-VOC polyure­thane finish to seal the grain and give a glossy, wet look, to simulate the effect of a wet whale rising from the water. The exposed edges of ply, underside of top and inside of torso were stained jet black and finish coated in black tinted polyurethane.

The finished whale tail desk was dis­played alongside a custom credenza that was also crafted from the same flitch of Macassar Ebony veneer. Both pieces have since become part of a pri­vate collection in Moscow.

Later that summer, I kept my prom­ise to my daughter by taking her east to the island of Grand Manan to go on a whale-watching tour. We were fortunate to have near-perfect weather conditions as we rode a lobster boat out into the Bay of Fundy to an area where whales traditionally feed. After a bitterly cold two-hour ride, the boat’s captain spot­ted a pod of six or eight whales on the horizon. He slowly eased to within about one kilometre of where they were, and shut off his engine. Now we had to wait, with cameras ready, scan­ning the horizon in anticipation of the whales coming to the surface. We didn’t know when or where these creatures might appear.

Given the unpredictability of the whales, I was snapping through an incredible amount of film in the vain hope that one of these shots might yield an amazing photo. At one point, I stepped back to change film when the most magical thing happened. Unbeknownst to any of us, a huge humpback whale had quietly surfaced behind the boat. As I busied myself with changing my film, an odd feel­ing suddenly came over me. Casting a sidelong glance over the stern, I found myself looking – no more than 10 feet away – right into one of eyes of this massive creature. The feeling of being small and powerless was overwhelm­ing. Humpbacks can grow to a size of 40 tons, and if he wanted to, this whale could have easily flipped our tiny boat like a cork in the water. But this was not how things unfolded.

With everyone now gathered at the stern, the whale slowly raised the top of his bumpy head out of the water, as if to confirm with his own eyes that we were all watching. He then exhaled a huge, bushy spout of misty air and emitted a sound not unlike that of an elephant’s trumpet. And let me tell you that after a life­time of eating seafood, that fellow could definitely have used a breath mint.

But the best was yet to come, as this whale seized the pro­verbial stage to ham it up for our cameras. It was a most amazing few minutes of time, during which this wild mam­mal – of its own accord – decided to approach our boat in a manner that gave us both the time and the angles neces­sary to take some absolutely incredible photographs. At some points, it almost seemed as if the whale was posing for some of the shots. On our long ride back to the harbour, I consid­ered what might have motivated such an untamed creature to behave in this manner. I know that whales are highly intelligent, so on some instinctual level this mammal would probably know that the greatest threats to its survival (pollu­tion, collisions with ships, entanglement in fishing nets, and slaughter by commercial industry) all come from humans.

In spite of this, this whale took an incredible risk to reach out and connect with us.

Perhaps, deep down, it was because this whale also realizes that as much power as man has to destroy, man also has the power to change – and to protect. And maybe through con­necting with us, this whale is also trying to secure his own future survival by sharing with us that feeling of oneness with him. Life finds a way, and we should never underestimate the magic at work in nature. 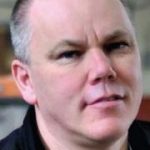 John is chief cook, bottle washer and head sommelier at his shop in Port Perry, Ontario. When not in his studio he’s either blogging or musing about being in his studio.