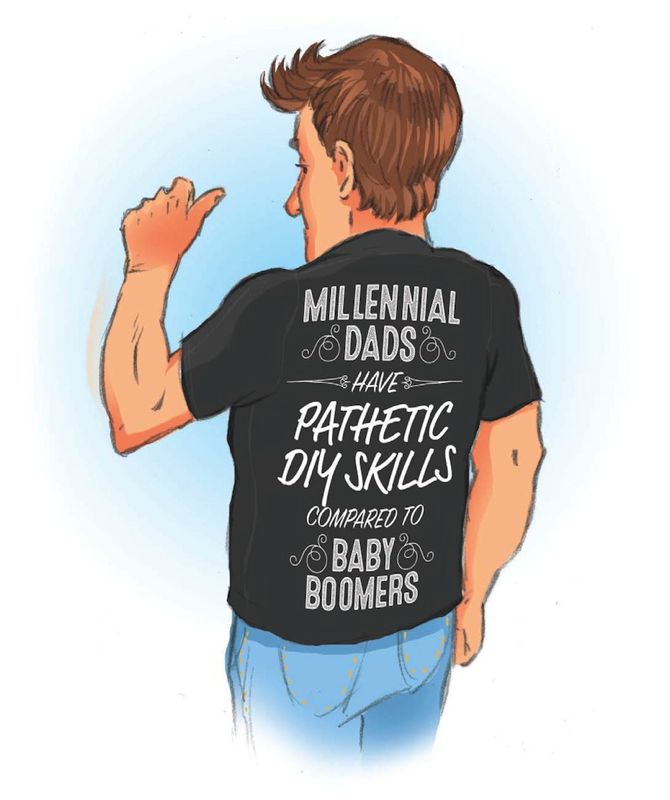 Millennials get blamed for just about everything. The question is… do they deserve it?

A few weeks ago I saw a headline that really bothered me. Ok, with the way the world is heading right now I see a lot of headlines every day that bother me. But this one in particu­lar irked me.

“Millennial dads have pathetic DIY skills compared to baby boom­ers,” the New York Post proclaimed. It cited a study that found when a DIY task needed to be done around the home, more than half of millennials preferred to call an expert.

That same proportion of millennials also reported not owning a cordless drill or a stepladder, while a third didn’t own a set of screw­drivers or a hammer.

I am a millennial who was born in 1985, so when I saw this story I posted a snarky response on Twitter: “Or… maybe I’m more willing to admit my shortcomings and don’t want to risk burning down the house, flooding the basement, or electrocuting myself.”

Over the past few months my wife and I have been toying with the idea of selling our 950 square-foot, 1.5 storey wartime home and buying something bigger for our family of four. We’ve owned it for about seven years now and are ready to move on.

We’ve actually done a lot of DIY work ourselves; we patched holes in the walls, painted the kitchen and hallways, primed and painted the backsplash in the kitchen, put up a new railing around the back porch (with a lot of help from my boomer dad), and a few other items on the list.

But we know our limitations. We called a plumber to reinstall some pipes and a new laundry tub in the basement that wasn’t up to code because – surprise, surprise – it was installed by a DIYer who had owned the house before us.

And in the coming weeks I’ll also be calling a drywaller to come and re-tape and putty many of the drywall seams in our bedroom and stairwell because you can see all the tape lines and most of the drywall screws that have popped.

Electricity is something that really scares me. A few years ago, the stove’s heat element stopped working and when I pulled it out from the wall I could see one of the wires had a bad connection. I knew exactly what needed to be done to fix it, but I didn’t have the confi­dence or skill to do it myself.
I spent $200 to have an electrician come and spend 15 minutes repairing the problem.

Someone on Twitter responded to my tweet with a similar response; much of the first year in their house was spent getting DIY mistakes fixed.

There’s an important distinction between not wanting to DIY, and knowing when to step away and call in the experts.

Besides, not owning tools isn’t a good indicator of someone’s skills either. Many cities and towns have tool libraries where you can rent almost any tool you need for just a few hours; home building centres also rent a long list of tools as well. And with home ownership get­ting more and more difficult for millennials, it’s no wonder many are eschewing tool ownership and DIY home repair skills.

There’s also a whole host of online and in-class sessions avail­able, known as “adulting” classes where millennials and others can learn basic life skills we either didn’t learn growing up, or were never taught. Things like car and home maintenance, sewing, and budgeting. Many of these classes were among the first to be cut when school budgets were slashed when I and other millennials were growing up.

Millennials get a lot of flack for not knowing their way around home repairs – but can you guess who my in-laws call every spring and every fall to recali­brate their thermostat?