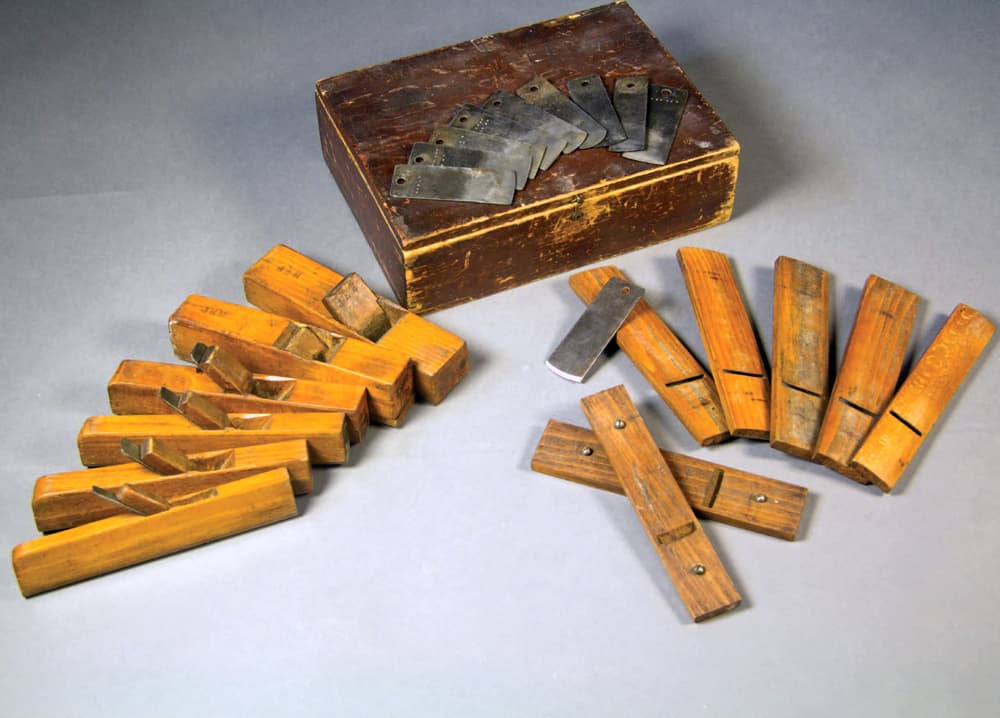 Doug Evans is a huge tool fan, and has a wonderful collection of tools. His crowning piece, however, is a set of Dryburgh pattern maker’s planes, made in Canada in the 1880s.

There’s no question how Doug Evans feels about tools; he loves everything about them. Who made the tools, where they were made and why they were made are all crucial questions Doug feels the need to know the answers to. I met with Doug late one afternoon to talk about and photo­graph his set of planes and he gave me all sorts of fascinating details about the set he was so proud of. I got the sense we were only scratching the surface of the knowledge he had about these planes.

Proud Collector
Evans, showcasing one of his most prized tools, his set of Dryburgh pattern makers’ planes. All told, Evans has hundreds of tools in his collection. (Photo by Bjorn Tranebo) 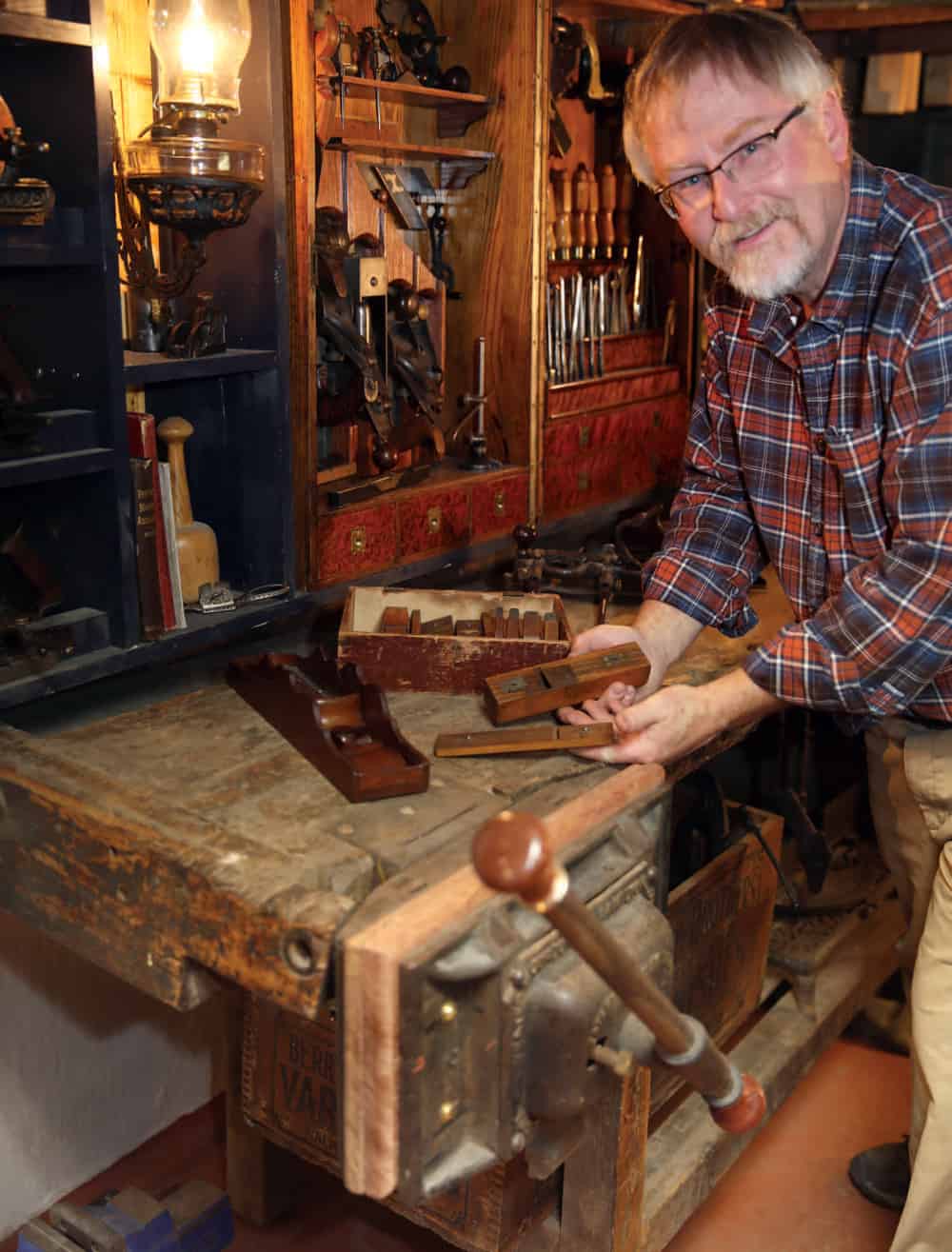 Makers Mark
Plane-makers stamped their name and location on the backs of their tools. Dryburgh Jr.’s tools bore the mark “J. DRYBURGH, BRIGHT, ONT” between the years 1877 and 1906. 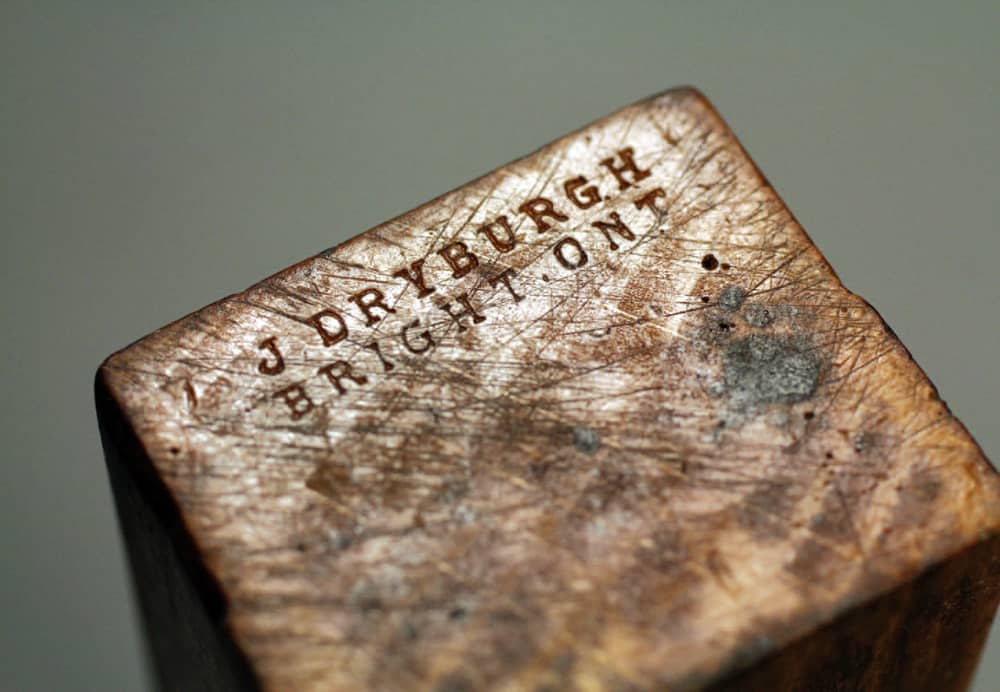 Flexible and Small
The two wider planes had exchangeable bottoms to give the user a wide selection of curves to choose from. Pattern-makers’ planes were shorter and lower than other planes so they could fit into smaller spaces. 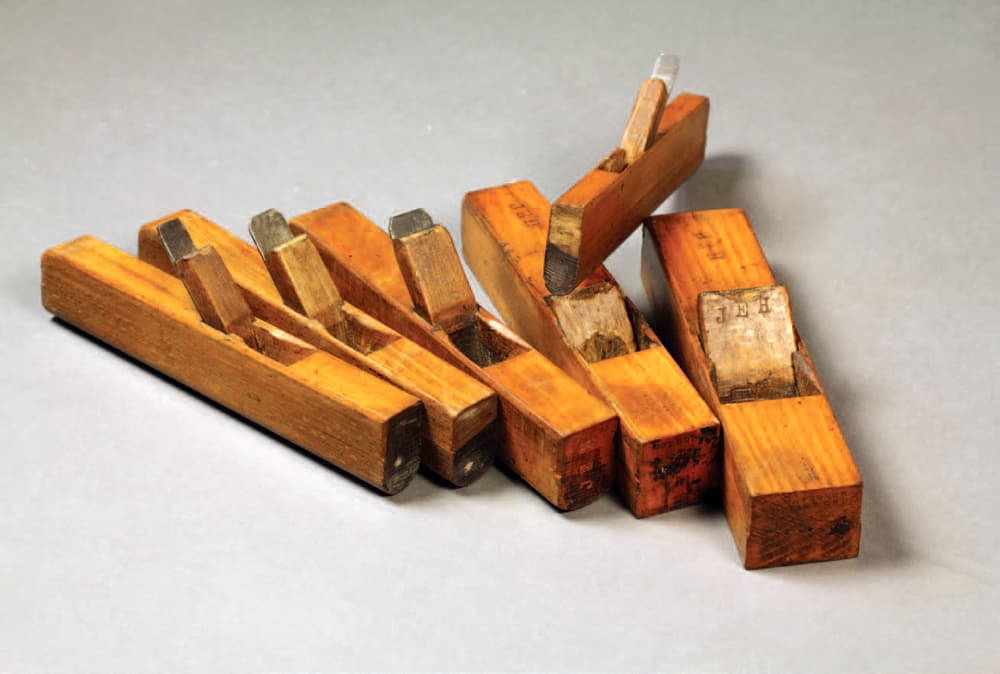 Matching Pairs
Each removable bottom is stamped with a number on its end, corresponding to the number of punches on the matching blade. 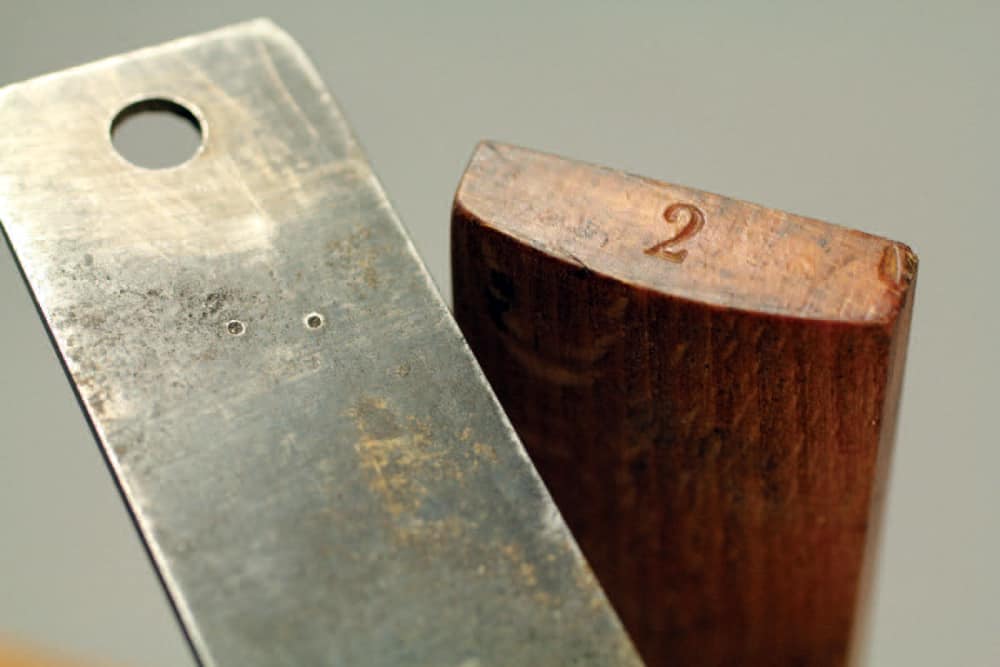 A Nice Home
Still in what is considered their original box, this set of Dryburgh planes could be transported or stored for protection. 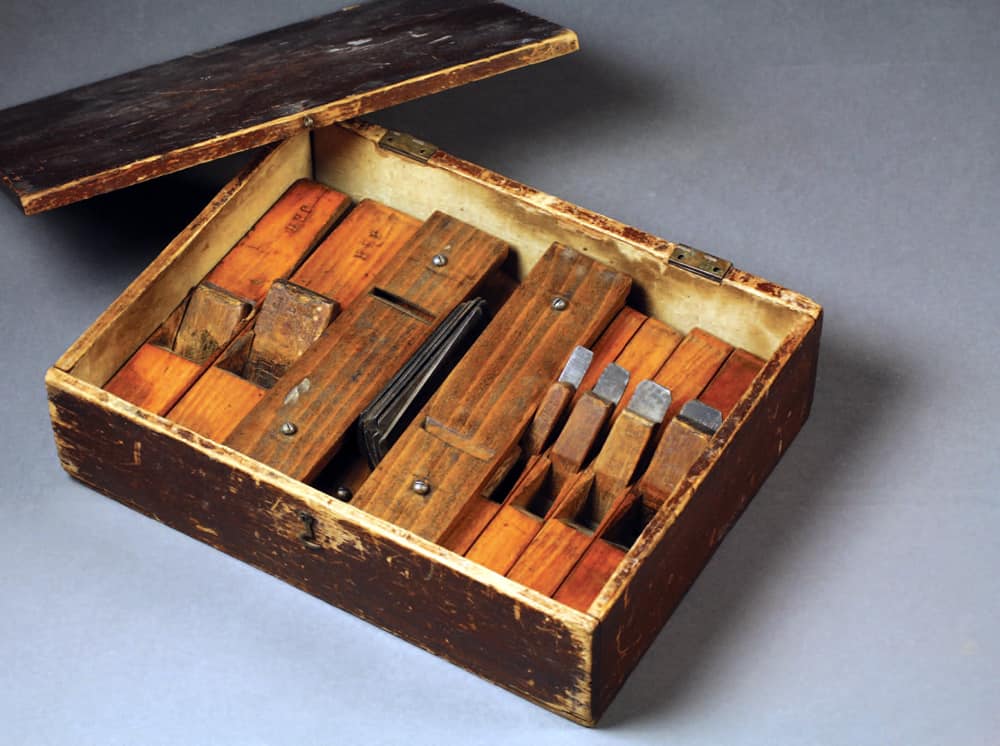 Removable Bottoms
A screw on the underside of all the removable bottoms is inserted into the keyhole catch on the bottom of the planes and slid back to lock the bottoms in place.

Distant Cousin
The Stanley 45, with its removable bottom rounds, offered a similar, flexible solution, but was geared more to cabinetmakers and woodworker. (Photo by Bjorn Tranebo) 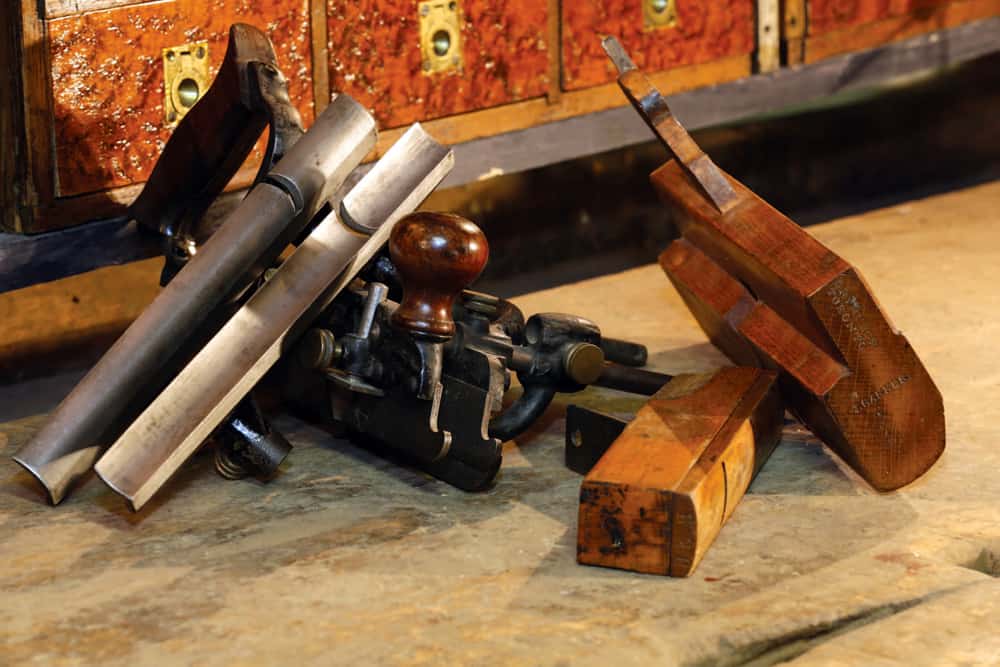 Evans has been a tool collector since about 1990. He took a short break from collecting, but five years ago jumped back in with both feet. He tends to enjoy collecting tools made between 1840 and 1890. With all the tools out there I asked him how he focuses his resources. “I usually start with a theme, many times prompted by a piece with a tremendous story,” he answered. “I research the tools to a time period,” he continued “and it takes years to assemble all of the tools. For example, the hand plane set in the left-hand till of my tool chest are all Stanley, targeted for the year 1876. Three years and $2000 later, I bought five more planes. The type 3 No. 9 3/4 block was the toughest.”
Evans is meticulous about his collection, and his goals for tools he wants. “I actually keep lists of my collection and for items I’m looking for.”

Estimating value of a collection is a hard task, but I had to ask Evans. “I would guess about $50,000 over about 250 pieces. Some items are aggregated. For example, I would count 80 Addis carving chisels as one piece.”

In the Victorian era, design was unfettered by cost and efficiency. Pattern-makers were presented with tremendous challenges and they had access to the best materials. They were woodworkers whose minds were constantly confronted with new and very complex problems. Pattern making as a distinct trade had its beginnings in the 1870s.

Many of the tools specific to the trade were in the early stages of development at this time. For example, chisels were typically fine and long, allowing for greater registration. A fur­ther refinement is the crank-neck chisel, which provides an offset for the hand. Pattern-makers used a lot of tools from different disciplines, including leather tools, core-box planes, shrinkage rules, etc. Rabbet planes and circular planes were also very useful to the pattern-maker.

Evans’ set of pattern maker’s planes were made by John Dryburgh, Jr. in the 1880s. His father, John Wilson Dryburgh, emigrated from Dundee, Scotland to Toronto in the 1850s. Evans talked about how Dryburgh Jr. was a highly skilled maker at a very young age. “At sixteen, and trained by his father, he would likely have been a journeyman plane maker by the time he came to Canada,” Evans told me. “Three years later, the entire family had moved to a farm in Northeast Hope, near Stratford, Ontario. John Jr. would continue in Northeast Hope until 1887, having become the principal plane maker from 1876 onwards. John Jr. moved to a farm property near Bright, Ontario.” It’s incredible to hear that Dryburgh Jr. was skilled enough to produce high-quality tools in his youth, but times were much different then. Time wasn’t wasted “find­ing yourself”, especially if you showed aptitude for a trade your father was already involved in. Dryburgh Jr.’s plane-mak­ing career would likely have spanned more than 55 years.

There are a number of distinct differences between pattern makers’ planes and standard planes for the cabinetmaker or woodworker. The pattern-maker was generally concerned with a range of rounds only, and they wanted planes that could fit into tighter spaces. “The set of Dryburghs I have,” says Evans “are about 7″ long and 2-1/2″ high, meaning they could fit where other planes couldn’t. They are also generally broader, providing a greater sector of the arc.”

“I believe the Dryburghs were Canada’s most prolific wooden plane-makers,” says Evans. “Though it would be a tough call,” he admits, “Sem Dalpe of Quebec would be a close rival. These Dryburgh planes are of the earliest form of a removable bottom plane and they’re crowning pieces in my collection. Over time, I will assemble a few hundred Dryburghs, but these pieces are once-in-a-lifetime buys. When I saw these pattern maker planes, I didn’t ask what the price was.”
“The planes appear to be a complete set. They’re stored in a fitted box with period oxblood paint and brass hard­ware,” Evans tells me. “Irons and soles are numbered and matched.”

The box contains four individual rounds, but what makes these planes especially rare are the two plane bodies with accommodation for eight remov­able bottoms. “They are quite possibly the only set known by Dryburgh with this feature,” says Evans. “At the time these planes were made, they solved a number of issues relating to the pattern making trade. Their lineage is almost certainly inspired by joiners’ round planes and the innovative examples of the cast iron combination planes developed begin­ning around 1870. For example, a year after the highly popular Stanley 45 was introduced, a set of four pairs of hol­low and round-bottom attachments were offered in 1885.”