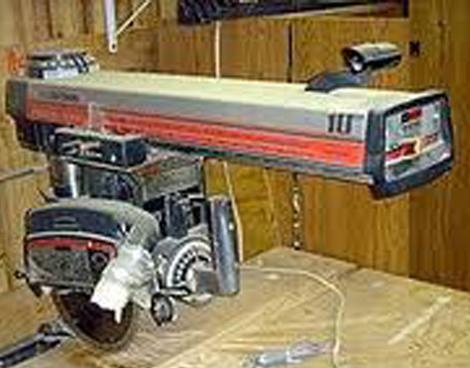 This article looks at the construction of two different hoods for the radial-arm saw. 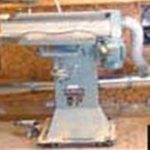 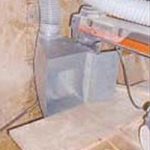 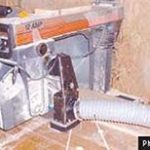 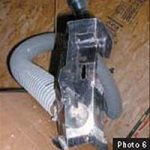 The first thing to consider are the various tasks this particular saw is being used for and, second, the positions of the support arm (angles, heights, etc). For this process use some cardboard boxes and take several measurements. Lay out the measurements on cardboard and then cut the pieces out to make sure that they will fit together. Duct tape is a good fastener for this. Later, when using sheet metal, you will need to leave extra material on the sheet metal pieces for tabs. In this case the face of the hood is 13”h x 10”w tapering back to the outlet pipe, which is 4”. See photo 3.

Install and test the hood. It may need tuning up to be more efficient.

I installed two cardboard inserts during the optimization phase. These inserts greatly improved the air velocity and dust flow at the hood face. Determine the best configuration using cardboard baffles before making them out of sheet metal. I also added a wing to the post side of the hood, which improved its performance when cutting compound miter angles. See photos 4 & 5 below.

The last photo shows the interior details of the hood. These were added to stiffen the hood. Note the brush along the bottom (the brush stops the sawdust from spreading and directs the air flow to pick it up). See photo 6 below.

Place the hood as close as possible to the vertical post. Make sure that the bottom front edge of the hood is just below being flush with the saw table.

In this case, the radial arm saw was the main saw in the shop and was also used for ripping. That meant that the saw was often turned 90 degrees, making a crosscut hood ineffective. This particular saw came with an adjustable guard on the front of the blade cover. By removing this guard I was able to utilize its hold-down-knob for the new hood. I again took several measurements and by fitting and bending I was able to come up with a hood. I used 20 gauge body steel, a modified generic 2 ½” dust port and a few pop rivets. The result is shown in the photos. See photo 6.

Here is an easy safety barrier you can install in your system, once you have piped everything directly to your collector fan.

If you look closely at the photo you will notice that there is a “T” fitting installed at the fan inlet. The leg of the “T” points down and is closed off with a “plug” (the plug has a “D” handle installed on it). The drop leg acts as a trap for things like screws, nails, knots, and heavy bits that may have been sucked up and are heading for the fan. These heavier objects will drop down into the leg before they get to the fan and avoid damaging it. The removable plug lets you clean them from the system. It is only effective, however, if you remember to periodically clean out the drop leg. Remember to check often as it can fill with heavy wood chips in a relatively short period of time. 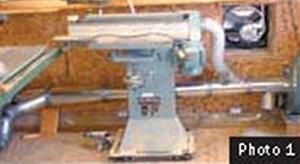 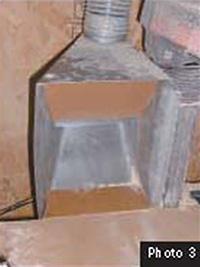 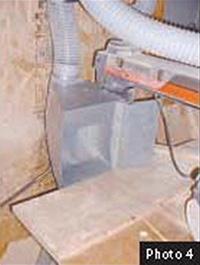