Home Techniques and Tips Profiles From Passion to Profession

From Passion to Profession 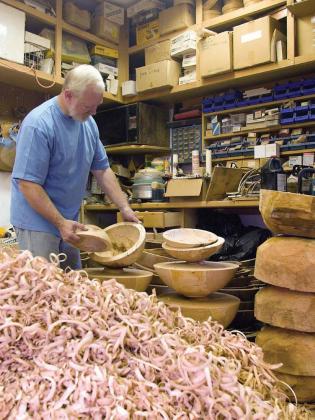 Doug Magrath and John Lacroix are two woodworkers who, while producing very different products, share a common background: neither started their career in woodworking.

Doug Magrath of London, Ontario is one of the few full-time professional woodturners, creating one-of-a-kind functional and decorative open-form bowls. Before becoming a woodturner, Magrath worked as an accountant.

Located a few kilometres down the road in St. Thomas, Ontario, John Lacroix builds guitars for both the retail and custom markets. He had to leave a successful career behind as a pre-press craftsman when his company went through restructuring.

Both were dabbling in woodworking and were enjoying the craft as a hobby, though neither had any formal training before starting their respective businesses. Today, both men have turned their passion for woodworking into successful full-time professions. Judging by the smiles on their faces, they couldn’t be happier with their decisions. 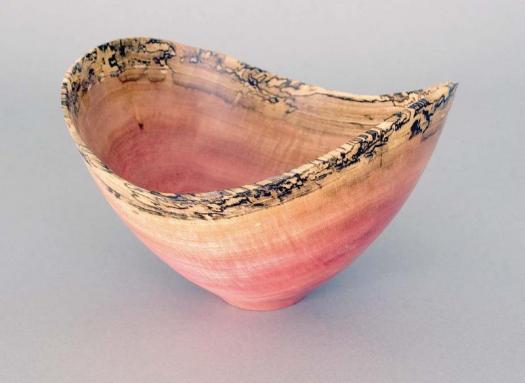 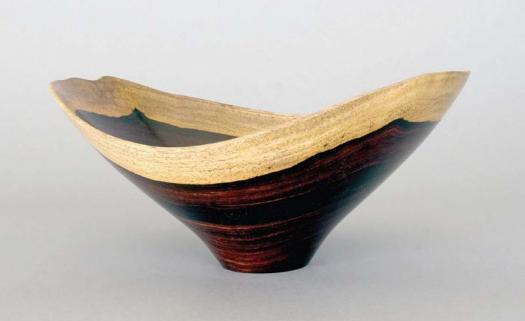 Nested Set
A set of mesquite nesting bowls made by Doug Magrath. Using this technique he uses as much of the valuable wood as possible, reducing waste and cost. 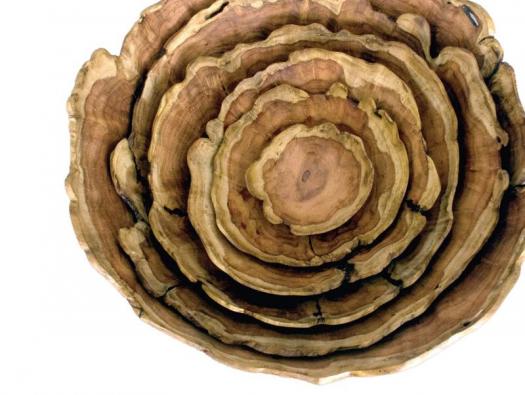 Only One Regret
Magrath readies a new batch of bowls for retail. His only regret is not starting his second career sooner than he did. 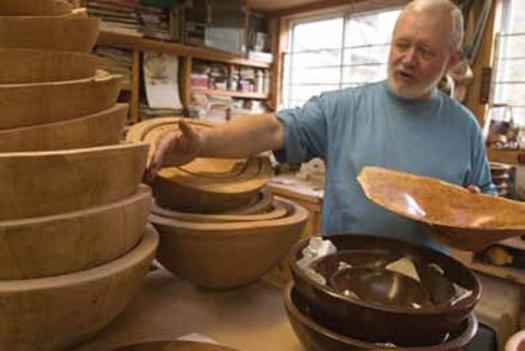 Test Drive
Lacroix strums a few chords on one of his acoustic guitars. Throughout the entire building process he’s constantly checking to ensure his guitars are retaining the specific tone resonance he strives for. 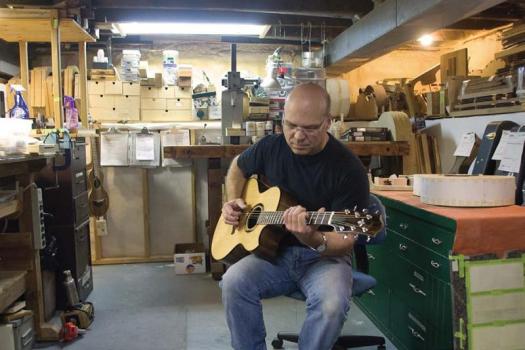 All in the Details
Lacroix shapes a thin metal strip that will be inserted into the body of one of his guitars. 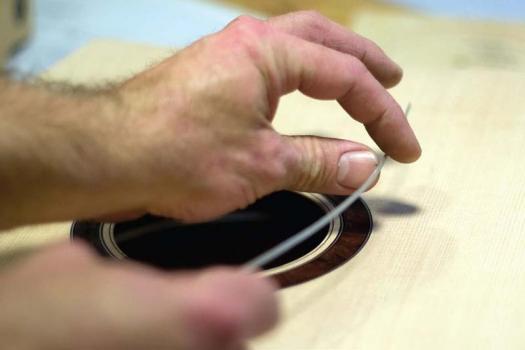 Strong Framework
St. Thomas custom guitar builder John Lacroix is framed by one of the moulds he uses to create the body of the guitars he builds. 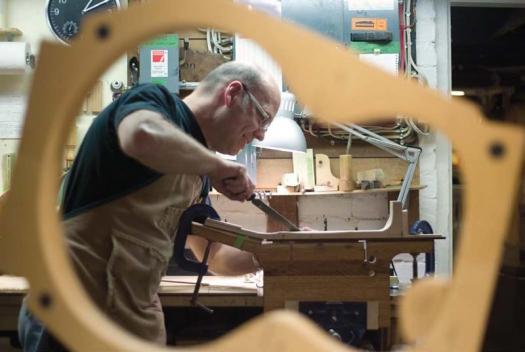 Accuracy Counts
From the bench to the product, Lacroix double-checks one of the measurements on his design, ensuring accuracy throughout the process. 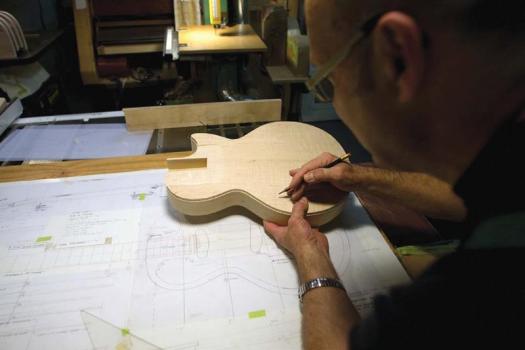 For Magrath, it was an expected trip to the hospital with chest pain that gave him the time to review where he was in his life.

“In hospital for eight days lying on my back, thinking ‘this is not a lot of fun,’” he says. The challenge Magrath faced was that he knew what he wanted to do, but he had no idea whether he could earn the income he needed to support himself. The left side of his brain kicked in and he relied on his years of training as a chartered accountant to see if he could formulate a business plan that would be successful as well as deliver the personal sat­isfaction he was looking for.
“First I had to decide what I wanted to do or make. I was doing woodturning as a hobby so I wanted to find a way to make a living at it,” Magrath said of his plan.

“I had to decide what was potentially going to be the most marketable product, and functional bowls was my choice. You don’t have to explain them to people. Then you have to decide how, where and for how much you can sell them, remember­ing you’re dealing with people’s disposable income, you are not making a necessity for them. I never set out to make the most expensive bowl, but rather one that 90 percent of the peo­ple who entered the store could afford to buy.”

With a product and potential market in mind, Magrath now needed to see what his competition looked like and to assess whether there was a market for bowls. “I took the poor man’s approach to marketing. I figured out where peo­ple would go to buy what I wanted to make, and I went in to talk to them.”

Magrath set out to visit a retailer in London who he thought would be the right fit for the product he wanted to produce. He found they were already selling a similar product that was factory-made and, while functional, they lacked the quality he thought he could bring to the marketplace.

He also sought out an accomplished woodturner who pro­ducing similar work to his – Dave Lancaster of Heirloom Bowls – and made the trip to the United States to pick his brain for ideas. Lancaster re-affirmed the decisions Magrath made, with one being the most important: predictability. To be successful in the wholesale/retail marketplace, Magrath needed to have customers he could rely on, and his custom­ers would also need to be able to rely on the product he would bring them.

“If you can’t make the same product over and over and over again, then the stores are not going to want you back,” says Magrath. “There is a reason they call it work, because it is. It is labour and a lot of people find it boring and repetitive, whereas I look at every bowl as being one of a kind.”

When he first started his woodturning business, Magrath had it set in his mind his production would be roughly 95 percent functional bowls and 5 percent decorative; some 15 years later he is close to his ultimate goal of a 50–50 percent split between the two types. At 65, he still produces 600 func­tional bowls a year, and spends the rest of his time producing unique nesting sets and decorative bowls for six clients in Southwestern Ontario.

With the benefit of hindsight, Magrath is left with one small regret and one large question.

“I only wish I had started 10 years sooner, I would have enjoyed it that much longer, and I wonder who will do it when I stop?”.

Lacroix’s journey from employee to guitar builder was simi­lar, but with one major exception: He had to find a new career.

“I was working in the pre-press department of a printing com­pany for 20 years. I really loved the hands on assembling a page, a book or whatever it was we were working on,” said Lacroix. Eventually, most of his job could be handled by computers.

The call he was expecting finally came. “I was called into the office, and they basically said, we look at the payroll and we see a big saving,” says Lacroix. “I actually had a job waiting for me with a local carpenter who needed someone right away.”

Lacroix had been tinkering with woodworking since he was a teenager. He recalls there was always a place in his parents home where he could work with his hands. Eventually Lacroix melded his passion for woodworking with his passion for gui­tars and music. “I had been playing since I was 18. And you know what kids are like, they take things apart and put them back together,” he says.

His first commercial guitar was a commission job for a friend who was familiar with Lacroix’s commitment to detail. “All of my skills came to bear on that guitar. With my graphic arts background I am constantly aware of the graphic impression of the page, and that comes to the table when I’m building a guitar.”

After being a little concerned that he may “botch” his first commission, Lacroix set his fears aside and committed to do the best job he could. “It came out quite nice. I was quite surprised,” chuckles Lacroix. Even with this first success he knew he had a long way to become the guitar maker he wanted to be.

“The first sides that I bent were murder. They turned out okay, but that was quite a journey,” recalls Lacroix. 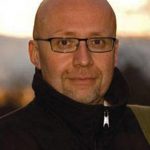