Home Techniques and Tips Profiles Getting an Education in Construction

Getting an Education in Construction 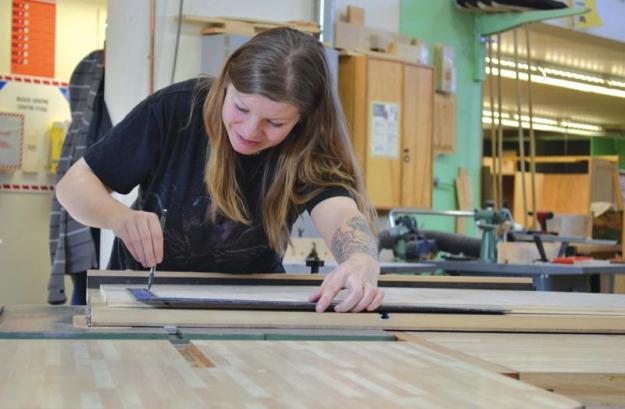 Kasandra Bliss has gone through tough times in recent years, but is more determined than ever to see her career in construction come to fruition.

Kasandra Bliss is a rarity in the Carpentry Program at Grande Prairie Regional College (GPRC), not because she is a woman in a physically demanding and predominantly male industry, but because she shouldn’t even be walking. “It’s a miracle I’m still doing this,” she says, referring to the June 2010 car accident that broke her neck. The break was so bad that titanium plates and screws had to be surgically inserted into her neck and she was placed in traction. “The doctor said some people with this type of break end up as a quadriplegic, so they were not sure I would ever do this kind of work again.”

Assembling a Career
Bliss working with her instructor at GPRC while they put together some casegoods. 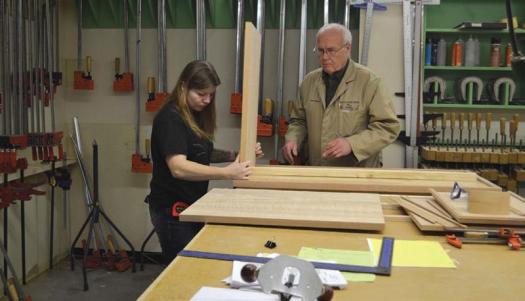 Lots to Learn
At college Bliss learned a lot about the machinery, tools and materials that are used in the trade. 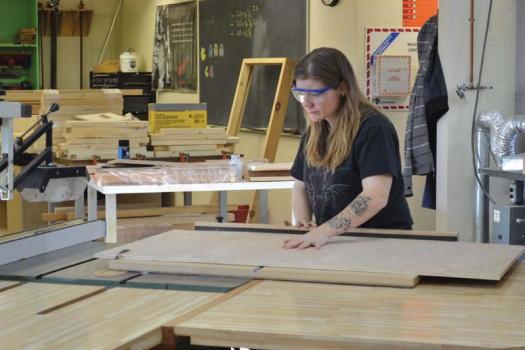 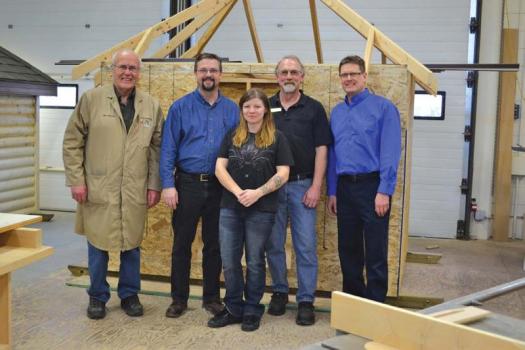 After three months in a neck brace and a lot of support from friends and family, Kasandra was anxious to get back into what she loves: building things. “My biggest worry was taking care of my little girl and to be back in carpentry.”

Kasandra, who is about to graduate from the four-year Apprenticeship Carpentry Program, didn’t let a major injury get in her way. With approval from her doctor she headed back to school in the spring of 2011. GPRC Carpentry Instructor Gary Thompson has taught Kasandra from day one and admires her perseverance. “There were never any complaints or excuses and I respected that.” Dave Long, chair of the Carpentry Program, agrees. “She’s a great example of some­one who looks ahead for the finish line and is going to meet that challenge.”

It’s obvious from talking to Kasandra why she chose to go into carpentry. “It’s something you never get tired of. You have to use your brain and there’s math involved. It’s challenging mentally and then you must meet that challenge physically too.” She points out why it’s better than a desk job. “You’re not going home stiff and sore from sitting all day; you get to move and if you’re outside, enjoy the sun.”

For Kasandra, the carpentry trade is not only a passion but also a family tradition. “I always liked trades in general; and along the way there were little things that led me to it.” One of those little things was the guidance she received from her grandfather as a child. “When I was a kid I would try to con­struct things,” she laughs. “They didn’t always turn out so well. My grandpa, a carpenter and autobodyman, showed me a cou­ple of things and helped me out.”

Her employers encouraged Kasandra to get her certifica­tion as a journeyman. Initially it was the close location that brought her to GPRC Fairview Campus for training but the personable instructors and small classes keep her coming back. “Fairview campus has a great community feel; the instructors are invested in the students, they motivate you and try to help you out if you need it. They have a great set-up in the shop and it’s nice to work with a variety of tools without having to wait behind seven or eight other students.”

Her instructors say it’s a two-way street. “She’s a real go-get­ter, a capable student and she has excellent hand skills,” says Long. “Her ability to work any problem out mathematically is fantastic.” Thompson adds, “You’d expect her to be a bigger girl. She’s just around 5’3″ or so, but she does everything the guys do, and it doesn’t faze her at all.”

She has run into some roadblocks in the past getting hired. Some companies hear a girl on the phone and they think, “I’m not calling that one back”. As a certified journeyman now, a resume will have a little more weight.

In fact, the industry may be turning its attention to the posi­tive attributes a woman can bring to the jobsite. “I’ve been in this business 30 years,” says Thompson. “And now I am seeing more women do every step of the trade – even concrete, which is hard on the body.” Long says he hopes more women will enroll because there are inherent aspects of carpentry work that are suited to them: “There is this historical stereotype but the women I have taught really enjoy it because it’s a very creative, imagina­tive trade; you are constantly visualizing projects and seeing them come to fruition. Women tend to be naturally creative.”

For prospective female students looking to get into the indus­try, Kasandra recommends they take an introductory course to see if there is a good fit. “If they like to work with their hands, there’s a program at GPRC called Trades Work for Women, a Government of Alberta program.”

She says she not only finds satisfaction in a job well done but also in the transformation of the project itself: “It’s awe­some during the building process; it’s almost as if you have x-ray vision. You can see all the steps and layers going into the project.” When asked if she would like to move up and one day run a construction crew, Kasandra is modest for someone who has accomplished a lot. “We’ll see further down the road – that would be alright. Right now I’m focus­ing on getting as much information and skills as I can.” 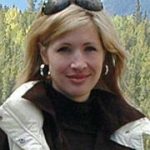 When not writing, Carrie can be found trying to tell a story with her camera or being sous-chef to her husband the cook. Her favourite activity is spending time dressing up with her two little girls.