Some very memorable chairs have been a part of Canada’s heritage over the years. Pull one up and enjoy a quick tour of some of our historic places to sit. 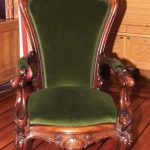 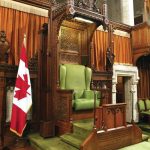 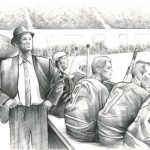 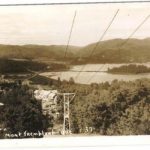 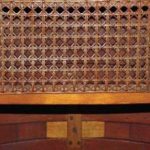 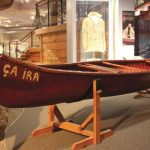 Canada has a relatively short history, yet in that time we’ve managed to form a strong Canadian identity. Most Canadians can relate to the our iconic national symbols, the Maple Leaf, the beaver, the hockey stick, the canoe and so on. It’s in this vein that we wanted to present symbols of Canadiana that don’t get as much publicity but are just as much a part of Canadian heritage and culture as Bombardier’s first Ski-Doo. By definition, the chairs we’ve chosen get the bum’s rush but all seem to hold up under the weight and, like early Canadians, endure and thrive.

Hockey Throne
The Toronto Maple Leafs´ team bench was in use for decades, and allowed some of the sport´s best players to take a load off while waiting for their shift. 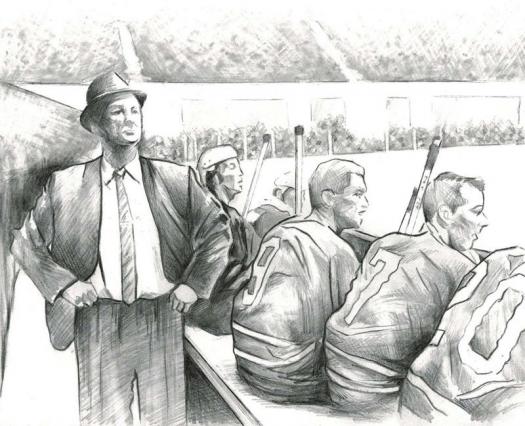 Trudeau’s Canoe
Pierre Trudeau paddled this cedar strip canoe through many lakes, rivers and rapids over the years. (Photo by Canadian Canoe Museum) Simple Seat
Trudeau’s canoe seat was like most other canoe seats, but it helped bring canoeing, and the solace of the natural world, to the forefront of Canada’s attention. (Photo by Canadian Canoe Museum)

Winter Recreation
The country’s first ski lift was built in Quebec in the late 1930s. It started a rich winter tradition of recreation that has grown dramatically in the past 75 years. (Photo by Tremblant) 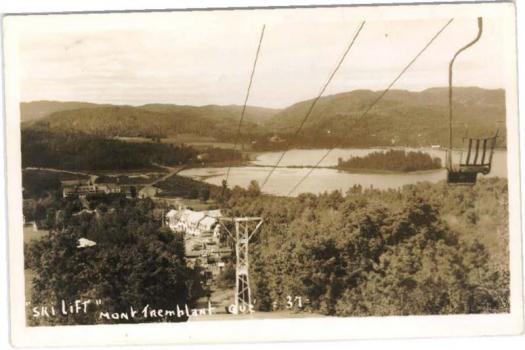 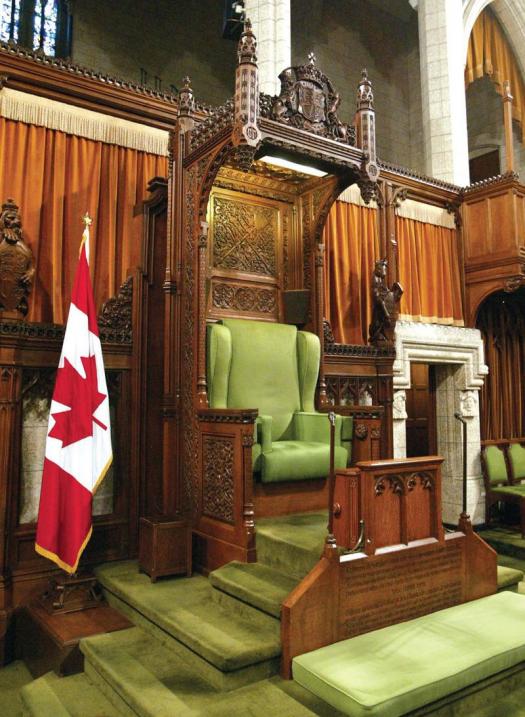 Pre Confederation
This is the first Speaker’s Chair that was used in 1867. It was made in Montréal in 1863 by William Drum. (© House of Commons Collection, Ottawa) 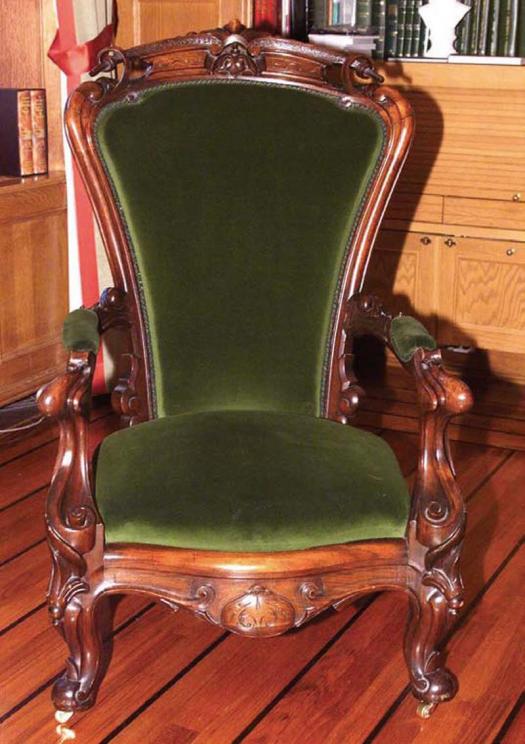 This is by far the most popular chair on the list and most Canadians have probably had the wonderful experience of sliding down into these incredibly comfortable chairs. Named after the Muskoka region of Ontario’s cottage country, these chairs were actually borrowed from our neighbour to the south that invented them in 1903. Thomas Lee first made the chairs for his Wesport, New York cottage and they were named Adirondack chairs shortly after. Of course, in Canada this wouldn’t do, thus the name change. As with any outdoor construction, cedar is best because of its natural resistance to both termites and weather but you can find these chairs constructed from pretty much anything these days, including hockey sticks. The wide, flat armrests of the Muskoka chairs make for a built-in table for your favourite summer beverage and probably contributes to Canadians’ fond association with these chairs.

The Toronto Maple Leafs bench is a symbol that all Canadians can relate to, as the Hockey Night in Canada theme song was said to be Canada’s unofficial second anthem. This piece of lumber has seated some of Canada’s household names – Tim Horton, Hap Day, Syl Apps, Jack Adams, Frank Mahovlich, Dave Keon, Darryl Sittler, Doug Gilmour – and patrolled behind by such legendary coaches as Punch Imlach and Roger Neilson.

Some Habs fans will deride the choice of the Leafs bench as the choice of hockey’s golden seat, but love them or hate them, the Leafs inspire great emotions from coast to coast to coast. They are the NHL’s wealthiest team and rank in the top 50 most lucrative sport franchises in the world. CBC ratings spiked this year when they ended their eight-year playoff draft; just as many people tune in to see them lose as win.

The bench was of course housed in one of hockey’s original six cathedrals: Maple Leaf Gardens. After 68 years and 11 Stanley Cups, the bench saw its last game on February 13th, 1999. The “Cashbox on Carlton” as it was known because of the record attendance the Leafs drew regardless of their record continued to generate money even after it closed as it auctioned off memorabilia and relics from the Gardens on November 19th, 2000. It’s unclear what happened to the original bench, as it didn’t appear in that auction.

The canoe itself is recognized as a symbol of Canada and is the single most important vehicle our country has known for early exploration, trading and surveying. It’s an elegant and sophisticated example of Native people’s technology adapted from raw materials. Trade between Aboriginals and Europeans was Canada’s most important early business; where there were no roads or railways, there were rivers. From May until November, the best means of access to mineral and timber resources in the hinterland was while sitting in a canoe’s seat. The first surveys in Northern Ontario in the mid-19th century were connected with mining claims. In 1900, the province sent foresters, agronomists, and geologists to canoe the rivers with the surveyors to make an inventory called the Northern Ontario Land Survey.

Canada’s wedding gift to Princess Elizabeth and Prince Phillip, Prince Charles and Lady Di, Prince William and Kate have all been handmade canoes. Pierre Trudeau, an expert canoeist, said of the Canadian Icon, “Bill Mason was a man who was so awestruck with the sheer joy of guiding a canoe through challenging rapids in the early spring or by the beauty of nature as seen over the bow of a canoe silently traversing a mirror-smooth lake in the early morning, that he could not understand why every man or woman on earth does not share his passion.” Another Canadian Icon, artist Tom Thomson, took great inspiration from the Algonquin region, which he explored in a canoe. He also met his untimely death in a canoe.

Mont Tremblant built Canada’s first chair lift in the late 1930s. The second was built by the Red Mountain Ski Club about a decade later, and we’ve never looked back. There’s no denying Canada is a winter nation, but it took the influx of Scandinavian settlers to show us that gliding down a mountain on skis would be a worthy pastime. Since embracing alpine skiing, Canada has relied on the chair lift to get us to the top.

Early gas-driven rope tows were built from old mining tram lines but with the invention of the chair lift the sport is now open to everyone, young and old alike. Our natural landscape provides Canadians with opportunities to ski almost everywhere across the country and there are many Canadians who have sat on a ski lift and enjoyed the serenity of the experience.

Canada’s world-renowned classical pianist actually didn’t sit on a bench at all; he preferred a chair from a collection of folding bridge chairs. His father, Bert, cut the legs of the chair so it was 14″ off the ground, a full 6″ lower than a standard piano bench. Gould traveled with his chair everywhere and it reflected him with its ingenuity, individual thinking and well-worn hard work. It now holds a place of honour at the National Arts Centre in Ottawa. Gould never gave a concert without it and when asked in a documentary whether it was as close a companion as Bach’s music has been to his musical career, whose music Gould championed, he replied, “Oh, much closer actually.” To see images of his chair, search “Glenn Gould’s Chair” on the internet.

Since Confederation in 1867, the Speaker’s Chair within the House of Commons has served as the symbol of Canadian democracy. The chair has changed over the years as early speakers of the house were allowed to keep their chairs after their tenure was over. The new permanent masterly carved, gothic speaker’s chair was presented on May 20, 1921 and although steeped in tradition it has continued to evolve with the times.

The original tuft black leather upholstery has been replaced with green velvet, and a mechanism to raise and lower the seat was installed, resulting in the loss of a decorative lower panel. Microphones and computer screens have also been added to keep up with technology. The chair is a true reflection of Canadian power as it represents the people’s seat and is literally the seat of democracy. We are planning doing more on this theme.

Please send Rob Brown ([email protected]) your thoughts regarding additional great Canadian chairs, seats, benches, etc. that should be on the list. There are surely many regional examples that are not part of this list. Rob will put together another article once he has heard from you. 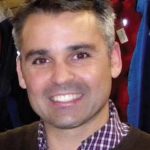 Dave is a runner, triathlete and freelance writer in Peterborough and immensely enjoys the view from his canoe seat.