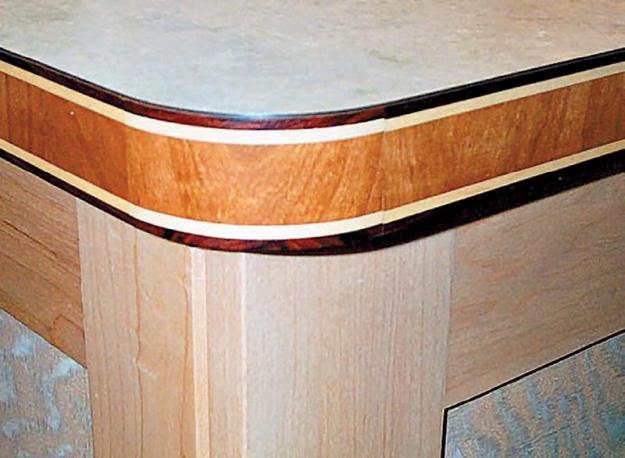 Adding inlay or banding to an otherwise plain project can add visual appeal and make the piece look much more interesting and professionally made. 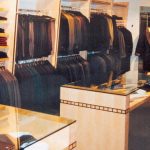 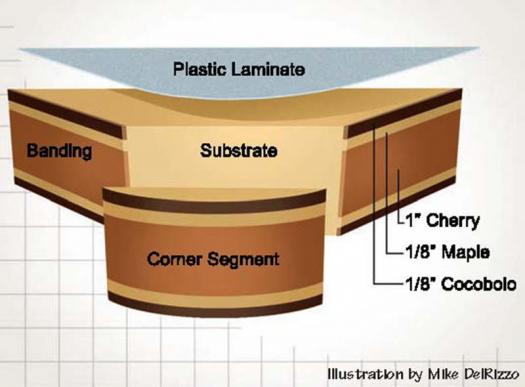 Inlaying is the technique of laying a thin and generally square piece of material into a dado or groove, so that both surfaces are flush. The inlay material can be colourful exotic wood, marble, or even metals. Today, most wood inlay is mass produced, with a surprising amount of hand work involved in its production. A large range of woods are used for inlay. The wood can be natural, coloured (dyed), or shaded by means of heat. Woods with distinctive grain pattern are also widely used.

Banding is similar to inlaying, except that the material is typically wider and thinner, and often applied on the edge of a surface, as shown in the photo above.

The two main drawbacks of purchased inlay and banding are size and price. Anything over one inch wide can be very expensive and can often be less than 1/32″ thick. Most of the commercially produced inlay is meant for smaller projects, such as jewellery boxes and musical instruments, and would be out of proportion for larger projects.

Marquetry and parquetry are two other forms of inlaying. Marquetry is the art of cutting thin pieces of wood into intricate patterns, and is sometimes referred to as painting with wood. Parquetry is the technique of creating geometric images with wood, such as you would find on flooring panels.

In the first example the challenge was to spice up the edge of an ordinary laminate countertop. I chose to keep the banding fairly simple to avoid drawing too much attention to the edge. The width of the banding is 1 ½”. The ‘sandwich’ consists of two outside layers of 1/8″ wide cocobolo, two layers of ⅛” maple, and a 1″ wide band of cherry, with the grain running 90º to the maple and cocobolo. I used 3′ lengths of cocobolo and maple. The cherry was sliced in 1″ pieces from a 4″ x 6″ block, to make up 3′ lengths.

If you use a sharp table saw blade to cut the cherry, the slices can be glued without further machining. Use shallow passes when thickness planing the cocobolo and maple to ⅛” to avoid splintering the stock. Using a thickness sander for this task would be ideal. It’s best to use a water proof or water resistant glue to avoid moisture problems at a later date. Remember to orient the grain of the different plies in the same direction. The sandwich can be glued up between a platen and the top of a sturdy work bench. Clamp the cherry slices horizontally to eliminate gaps in between. Drive a small brad at the ends to prevent the different layers from sliding when tightening the clamps. Be sure to remove the brads before slicing the sandwich into strips.

Remove squeeze-out from the cured sandwich and square one edge on the jointer, ready for slicing. The thickness of the slices depends on the quantity required, but about ⅛” should be sufficient. In this case the yield would be around 5 strips per inch of sandwich width. They could be thinner for curved applications. With a sharp blade in the band saw and steady pressure on the blank it is possible to rip near perfect strips from the blank without jointing between each strip. Jointing the edge has its own hazards with the grain set in two directions angled 90º from each other. Thickness sand the strips to remove band saw marks, and they are ready to be applied to the substrate. Fragile corners are a problem with this kind of banding. To solve this, the corners are rounded and a solid piece of banding material inserted in the corner. A triangular piece could also have been inserted to keep the corner square. Glue the banding to the two edges, cutting the corner off at 135º.

To prevent splintering at the end of the saw cut, apply masking tape. Belt sand the corner smooth, apply plastic laminate to the top, and finish the banding with the finish of your choice.

The second example shows a decorative inlay used in a maple display fixture and edge banding for the fixed shelving. To achieve maximum contrast I used wenge for the outer layers with alternating wenge and maple for the middle part of the sandwich. Total width of the inlay is 1 ⅞” with the outer layers ⅜” wide and the middle 1 ⅛”. I made the alternating wenge and maple sections 2 ⅛” center to center, so that the wenge sections ended up on the corners of the furniture, and the ends of the shelving units.

Assembly of the inlay is the same as for the banding. It’s important that the parts are square and of the same thickness, to ensure a straight piece of inlay. Wenge is notorious for splintering, and since it is hard to tell if you are looking at the cross section or the radial section in small pieces, I decided to expose the cross section for the alternating wenge pieces. Movement is minimal with these small pieces, especially if it is only ⅛” thick. You’ll need to thickness sand the inlay rather than plane it.

I routed a recess for the inlay that was slightly narrower than the inlay to ensure a tight fit. I then fitted, glued, and clamped everything with the aid of curved cauls.

You can achieve an understated elegance by using a relatively uncomplicated inlay or banding, proportioned to your project. While it’s relative straight-forward to make inlay or banding, voids and gaps tend to be obvious, so make sure you use sharp tools and are as accurate as you can be. 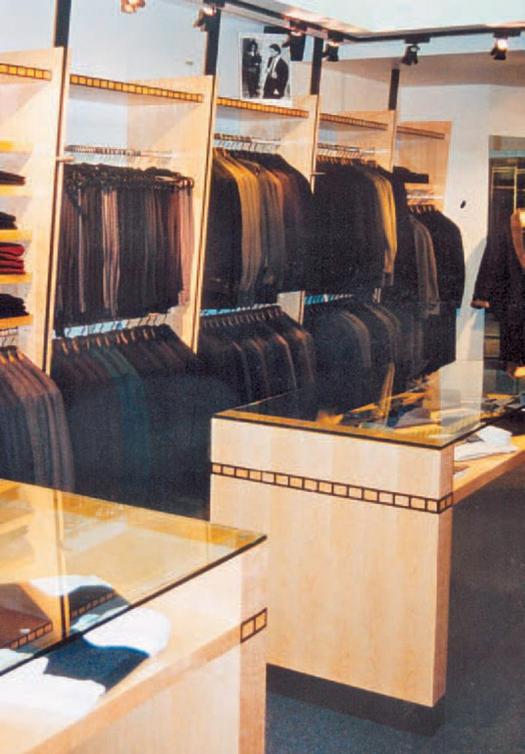