The original Bosch Lute was made in the 1500s. There is only one of them in the world, but a skilled luthier from Saskatoon completed a very similar lute. Learn how he assembled all the pieces that make up the back of his version of the Bosch Lute.

When I saw a picture of the Bosch Lute, with the illusion pattern on the back, I decided to take up the challenge of figuring out how it was made. Not only was it an intricate pattern, but it was also done over an unevenly rounded surface. The original is in the Museum of Music in Paris, France.

After studying the picture I realized I had to ignore the pre­dominant star pattern and concentrate on the vertical and diagonal lines, and how they intersect. It has an algorithm that never repeats itself. No two stars are the same size, and no two triangles that make up the stars are the same size. The surface area of the body changes throughout the back as it curves. It becomes smaller at the top, wider in the middle and smaller again near the base. Because of the compound curve each tri­angle must be carved individually. I started in the middle and worked in circles until the entire oblong egg-shaped sphere was covered with the triangles that made up the stars.

Spruce Strips
After building a wedge-shaped jig to work to, Gray bends a thin spruce strip around its curved edge and flushes the sides of the spruce strip with a block plane. These strips are for the base that the triangular pieces will be glued to. 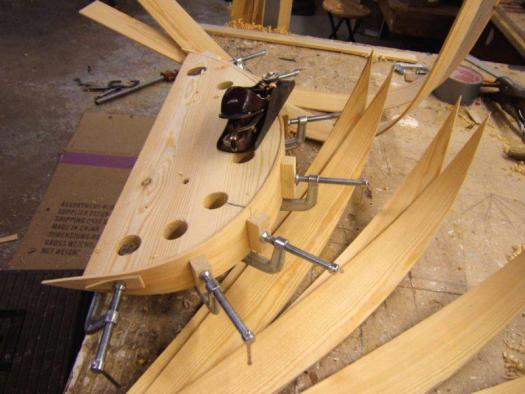 Careful Glue-up
With all the strips cut, Gray uses temporary applied blocks and twist ties to assist with gluing them all together. This specific glue-up was for a different lute, though the process is the same. 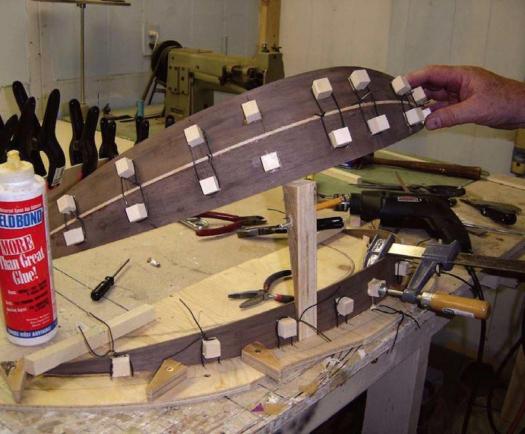 Proper Pattern
Once all the lines are on Gray adds some letters so that he is sure to shape the correct species of wood for each triangular location. One mistake would be heartbreaking if it wasn’t caught right away. 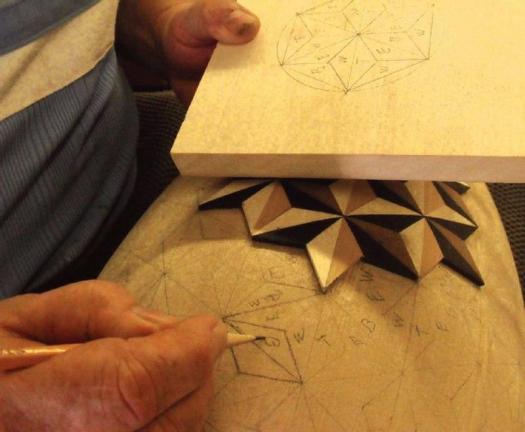 Lots of Lines
The first set of lines are created by the edge joints between the spruce strips. The second group of lines were added at a 60° angle to the first lines; then the shorter line segments were added. 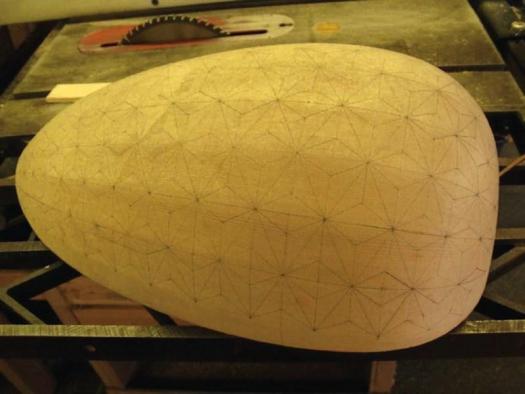 One of a Kind
Gray cuts each piece to fit the other pieces, and the layout lines. No two pieces are the same. 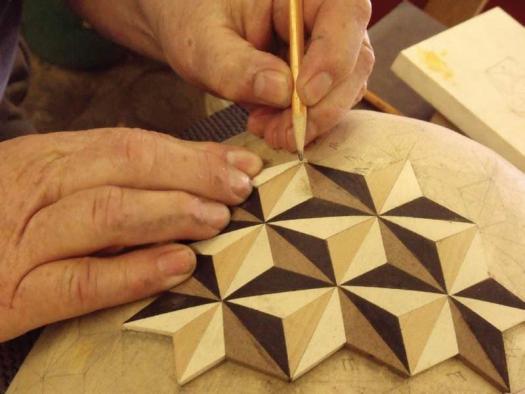 Perfect Triangle
A simple shop-made jig allows Gray to shape each piece by hand with his disk sander. 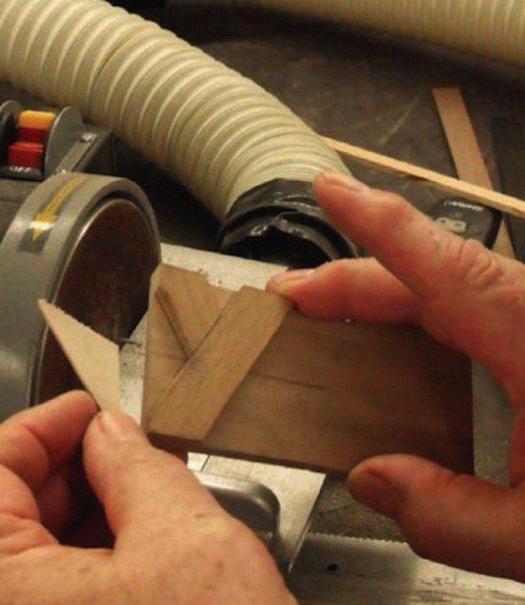 Concave Underneath
A second jig holds the piece while Gray uses a drum sander to add a concave surface to the underside of each piece, in order for it to mate cleanly with the spruce base. 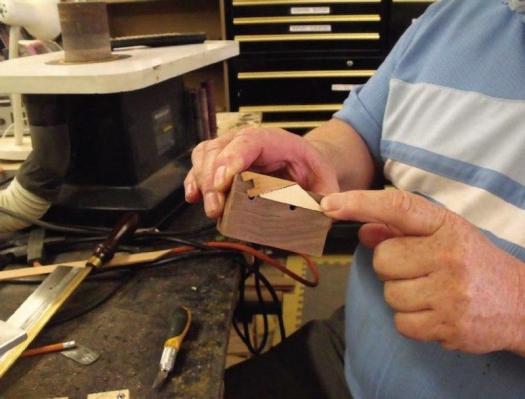 If I just shaped and glued together the triangles, not only would the resulting shape be too weak, but it would be very difficult to obtain the properly curved surface. I decided to create a base from thin strips of curved spruce that were glued together to form the perfect shape to work on top of. Once the pieces were shaped with a jig and hand plane, I used small blocks to attach small ties to and bring the parts together.

Once dry I used the joint lines running the length of the base to help lay out the pattern. The other lines were laid out more by eye than anything. These lines are not parallel, and could only be partially guided by a flexible straightedge.

Before I start shaping pieces I create a master species tem­plate so I can keep the four wood species organized. To start, I mark the species initial on each triangle of the spruce form, near the center of the pattern. As I work I add more initials as needed.

Each piece is measured against the lines I marked, as well as the existing pieces already in place. The triangles at the center of the lute are larger than those towards the edges of the lute; no two pieces are the same size or shape. I use a simple shop-made jig and a power sander to shape each piece until it is the perfectly shaped triangle I require. A concave shape is also added to the undersurface of each triangle with another jig and drum sander. This concave surface allows each piece to fit snugly against the spruce base. I continue this tedious process until all the parts have been fitted and glued to the spruce base.

With all the triangles fixed to the base I used 40-grit sandpa­per to level the outer surface of the lute. I couldn’t sand the lute any further as the ebony dust would contaminate the holly. To smooth the surface for a finish, I scraped the pattern, gener­ally working in the direction of each individual piece’s grain. Another tedious task.