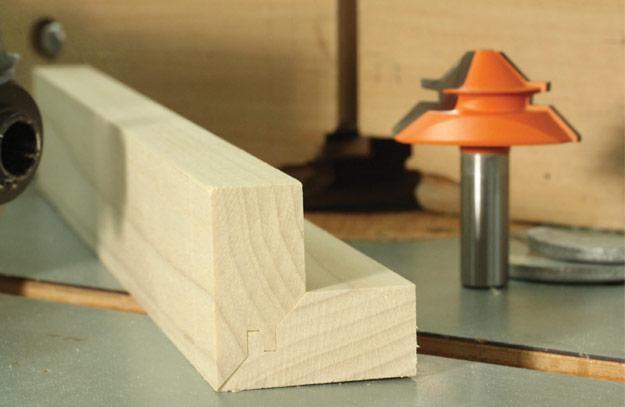 The main advantage of using a mitre joint is that it looks clean and simple. The downside is assembling it evenly so it doesn’t look like a dog’s breakfast. The lock mitre joint ensures the joint not only looks great when assembled, but that assembly is a snap. 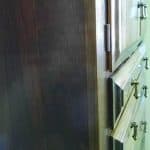 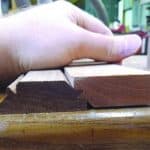 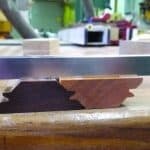 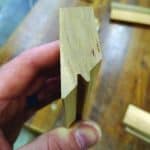 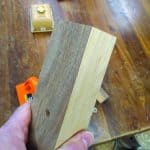 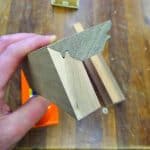 Someone asked me recently what’s new in the tool world. “Not much has changed since the electric motor was invented,” I said. “And even then, it’s still just a blade cut­ting wood. Now the blade just moves faster.” That’s a statement I will defend for a long time. Sure, every once in a while something comes along to cut wood in a new position, but at the end of the day it’s still a spinning cutter with a motor. However, sometimes there are spinning cutters that you may not have tried before, and that can be exciting. One of those spinning cutters that I suspect not many people have tried is the lock mitre bit.

The first question you might ask yourself is “Why would I try a lock mitre bit?” That’s a fair question. I expect the mitre joint isn’t the most popular joint in the world. For one reason, they’re tricky as anything to glue up. The angled face of the joint is almost never parallel to any clamp face and glue, of course, acts like a lubricant until it sets up. Pressure on the joint tends to make it slide out of alignment. On top of this, any imperfection when cutting the angle will make the joint out of square. For these reasons, I expect people avoid mitres in general. The lock mitre adds yet another degree of complexity to the joint, so I expect that scares some woodworkers even more.

The bottom line is that the lock mitre joint will make assem­bling a mitre joint much easier and will virtually always result in a mitre joint with two outer tips mating at the exact same point. This helps create an invisible joint between the two parts. The male and female portions of the joint that are routed into each piece fit into each other and lock the joint in place, hence the name of the joint.

Invisible Joints
The glue line where the face joins the sides of this armoire is rather obvious, and not very pleasing to the eye. A lock mitre joint will remove this problem. 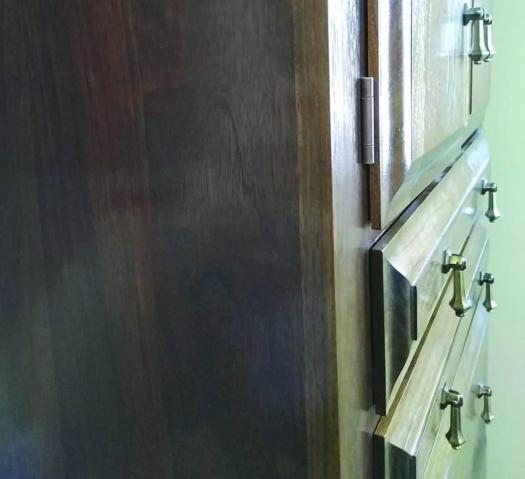 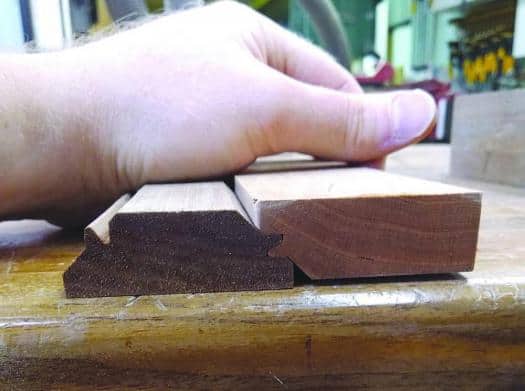 Perfect Bit Height
Here the straight edge sits flat on top of the test pieces and no light shines through. The boards are in the same plane which means my height is set correctly. Next, I will move the fence back until the board comes to a sharp point on the 45o face. 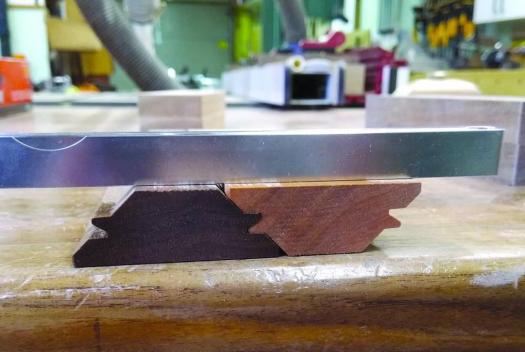 Set the Fence Location
The small flat on the left lets you know how close you are to having the fence location set up properly. In theory, having the flat reduced to nothing, while at the same time not cutting any material off the outer face of the workpiece, is the setup you are aiming for. 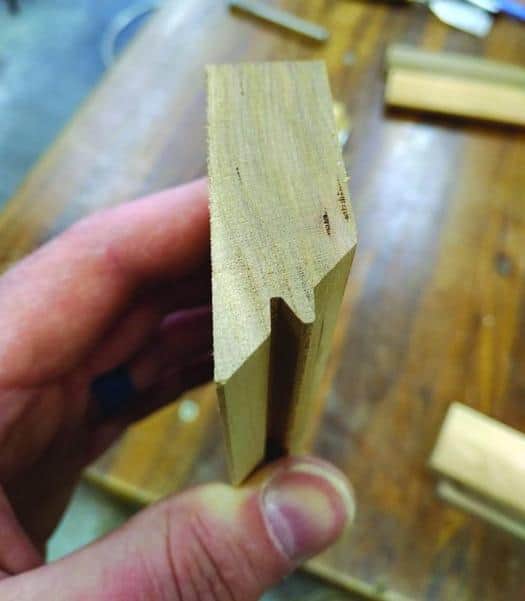 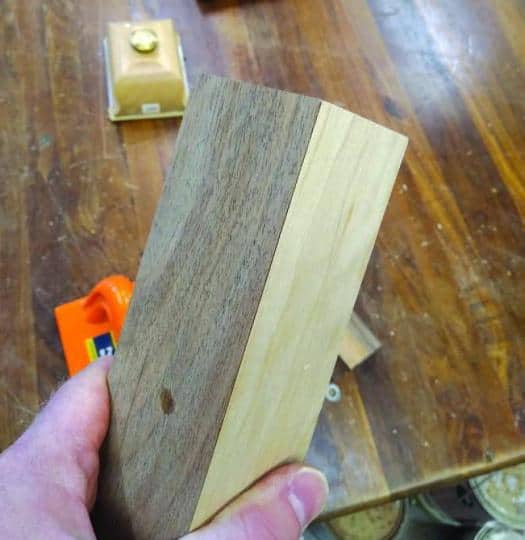 The Finished Joint
The finished joint is shown here with walnut and cherry. Different species were used for demonstration purposes. When the same wood is used the joint is invisible. 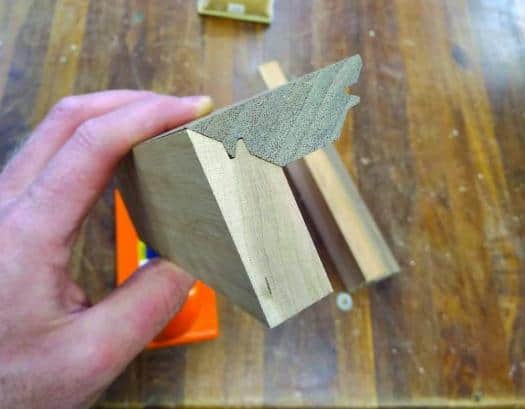 I ventured to try the lock mitre bit more than 10 years ago, and although it was anything but new then, it was new to me. I believe it has (at least slightly) revolutionized my woodworking projects. I don’t use it on every project, but when I do use it, I’m really excited with the results. Why use a lock mitre? I think it’s easier to explain by example, so I’ll describe the first project I used this bit for: a bookcase. I wanted to build a bookcase with doors to hide all of my stuff inside. For the design, I decided to use a face frame around the doors. However, if I just glued a frame onto the sides, I would see a glue line down the side of the cabinet, which is something I never like to see in furniture. The lock mitre bit allowed me to cre­ate a face frame cabinet that looks like it has 2″ solid wood corners as opposed to two 3/4″ pieces of stock glued together.

Easier than you think

Now that you can imagine the types of projects this bit can improve, let’s look at how this bit is set up and used. I suspect most people avoid the lock mitre because they’re afraid setup is tedious and difficult. Hopefully, I can show you how easy it can be.

The first step is to make sure all of the stock you plan to use is smooth, straight and, most importantly, even and accurately machined to a uniform thickness. The lock mitre bit will not work well with uneven boards. I like to thickness-sand my pieces before going to the router table as I find this gets my thickness even more consistent than the planer does. You should also prepare a few extra pieces of stock the exact same thickness to use when setting up the router bit. It’s very important that all of your stock be the same thickness for the lock mitre to work properly, so you want to make sure that you prepare all your stock at the same setting on the planer or thickness sander and have a little extra just in case.
In terms of length or width of stock, any piece that can be routed safely will work. Smaller pieces can be done with push sticks or jigs to assist in holding the work. The length or width of board required will be the outside finished dimension of the piece you’re building.

Once you have installed the lock mitre bit, grab one of your set-up pieces of stock and lay it on the router table beside the bit. I like to adjust the lock groove by eye to be roughly in the middle of the stock to start, and then make a few test cuts to check it. I start with the fence revealing less of the bit than is required to make a complete cut. I will start by removing about 3/4 of the edge of the board, leaving a flat of about 1/4 of the width of the edge. The exact width of this flat is not critical. Rout an edge on two differ­ent test boards. For now, both boards should be routed with the piece lying face up on the table, not standing against the fence. Once done, flip one over to see if the boards go together in a flat plane. If the boards produce a perfectly flat joint, then the lock groove is perfectly centered and you can proceed to the next step. If the boards do not join flat, the bit must be adjusted up or down. Remember that the bit needs to move half the amount of the differ­ence between the two boards. Move the bit up or down slightly less than half and try again. If the error is worse, the bit needs to move in the other direction.

Once the height is correct, setting the fence is easy. Take a fresh test piece and rout the edge, then slowly move the fence back until the flat spot on the edge of the board disappears. It’s important not to move the fence back too far or the piece will not contact the fence at all on the out feed side of the router bit, making it hard to keep the edge straight. If your router is not very powerful, you may want to rout a first pass before moving the fence to its final depth setting. Remember, when you go to rout the good wood, one side of each joint needs to be routed lying down on the table, and the other side should be routed standing up against the fence. In both cases, the visible face of the wood will face towards you, away from the table or fence.

Gluing a lock mitre joint is relatively easy. I like to use a small brush to make sure I spread a thin, even coat of glue in the joint so that when clamped, the joint will tend to pull together rather than slide apart. You don’t want to apply too much glue to the joint. The outside is easy enough to clean, but the inside corner can be diffi­cult to access. If the inside is never to be seen, this is not a problem, but on a project where the inside is visible you will want minimal squeeze-out to clean up.

I hope this inspires you to give something new a try, and to take your woodworking projects to the next level.