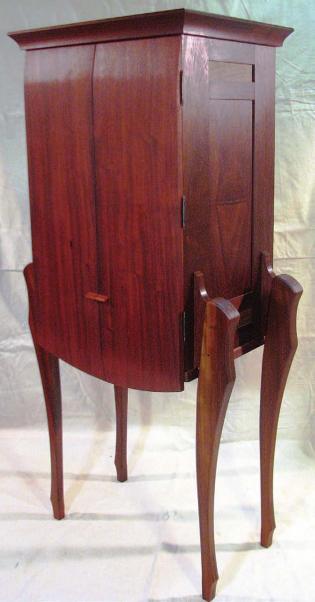 Rob Jackson from Stratford, Ontario made this tall cabinet from paduak with walnut and curly maple accents.

In the recent past, he has built a lot of horizontally-oriented projects – mainly hall and console tables – so he decided it was time for a change. Over the course of a year, Jackson spent about 80 hours getting all the details of this cabinet just so. When asked about what inspired him, he was quick to reply, “The design started with a piece of padauk I had that needed something special done with it. It had an inclusion perpendicular to the grain.” Jackson re-sawed it and used the veneer to make the panels for the sides and back. Ensuring that the doors were installed perfectly was the toughest part of the build. The cabinet was finished with tung oil.

Made by Rob Jackson