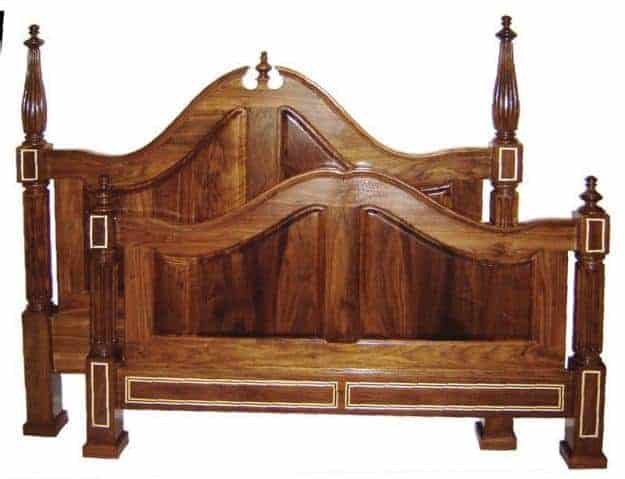 Mohammad says that this walnut bed with maple inlays is the most challenging project he has undertaken since he starting woodworking in 2005. The initial design for the bed focused on fluted posts as the dominant feature of the project. As the design process continued finials, inlays and a curved cap and moulding on the tops of the footboard and headboard were added.

The posts were made by laminating two 8/4 boards. The finished size is about 3 ¾”. Though a novice wood turner, Mohammed found that the posts were not as challenging to turn as he thought. Much of the effort went into building the jigs for the flutes and reeds. The most time consuming aspect of the project was building the curved cap on the tops and the curved moulding below them. All are done by bent lamination and then routed on the router table. Almost all the pieces are attached using traditional mortise and tenon, or floating tenon joinery. In general, Mohammad prefers hand tools to power tools. For example, the mitre cuts at the center of the cap and the moulding on the top of the footboard were done with hand tools; there was absolutely no room for any error, particularly after spending so much time on preparing the two pieces. Overall, the bed dimensions are 88 ½” by 65 ½” and houses an 80″ by 60” platform for the mattress. The headboard posts are 60” high and the footboard posts are 40”. The maple inlays are ¼”. The finish is boiled linseed oil, followed by two coats of shellac, and then a brushed on water based polyurethane.

A beautifully executed project by a talented novice; we look forward to seeing more of Mohammad’s work.

Visit forum.canadianwoodworking.com and join our woodworking forum. That way you’ll be able to show your work to the world, and vote for our next featured project.