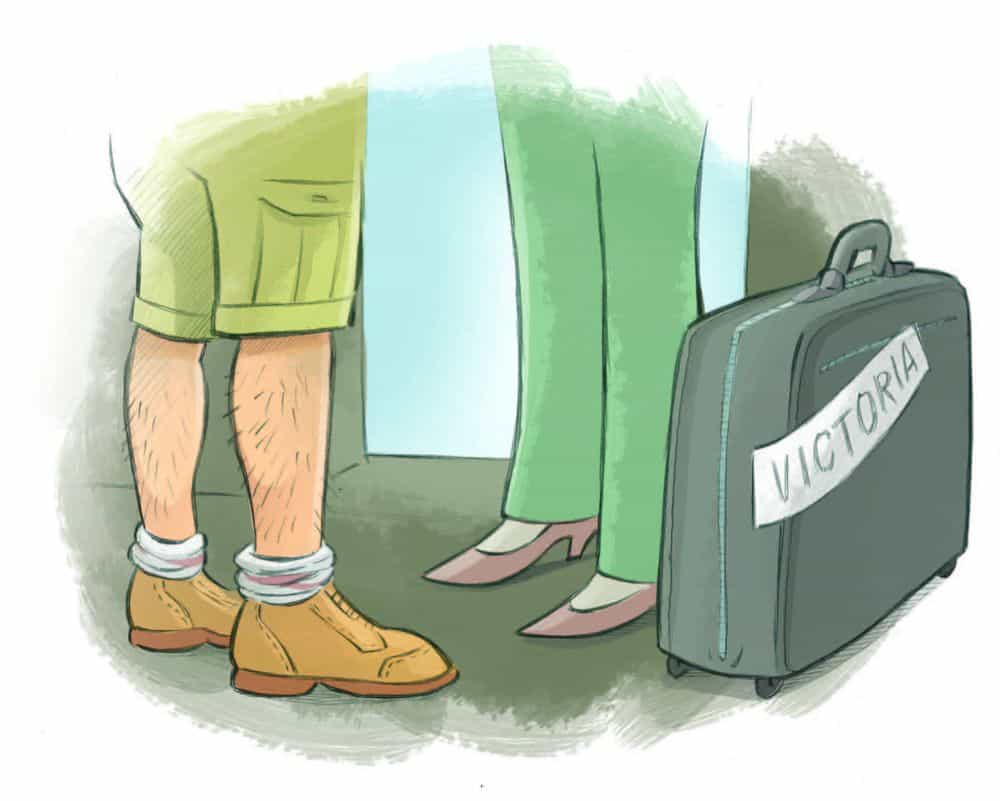 I love renovating. Or to be a little more accurate, I love 90 percent of renovating. It’s the final 10 percent needed to actually finish the reno­vation that I don’t much like.

As anyone who knows me or has read anything I have written will attest, every time my wife goes anywhere at all and for any amount of time no matter how short, I oft-times take the opportunity to perform some desired renovation.

Guess what! My wife has moved to Victoria!

Now, before you inundate her with emails and texts of “Congratulations,” “It’s about time,” “What took you so long?” etc. etc., or engulf her answer­ing machine and in-box with happy little messages of best wishes, you’re much, much too late. Her parents, her many, many, many siblings, the neighbours, gro­cery clerks and the postman have already beaten you to it. Besides, it’s not like you might think. Yes, she may have moved but she hasn’t actually left me. (I’m fairly sure I heard a nationwide sigh of disappoint­ment as I typed that last sentence. Strange!) No, she’s moved to Victoria to take up a new position. I am due to follow her in the spring, just as soon as our son retires from university. In the meantime, I have six months to do some renovating.

But first a little background. The first house I built we lived in for three years while I built our second, larger house. The first one never did get finished and eventu­ally I tore it down and used the materials for other projects. And yes, large impres­sive bonfires classify as projects.

The second house did actually get fin­ished. Yes, it did take 13 years and I was still nailing on fascia between carting furniture and boxes out to the U-Haul truck, but it did get finished. In my defense, in addition to actually build­ing the house from scratch, (as well as cuts, contusions and a few broken, albeit minor, bones), I also re-arranged the bath­room fixtures twice, swapped the kitchen with the bathroom once, and then just for fun, added a porch and another bedroom addition off the back. And, at my wife’s insistence, I also installed a railing around the upper deck so the kids wouldn’t fall off quite so often.

To date, in our present home, which only has eight separate areas on the upper floor including walk-in closets and hall­way, I have renovated all eight areas. Want to guess how many were actually completed?

The main bathroom I believe is actu­ally finished. I’m not sure though because I never go in there. The dog doesn’t appre­ciate me using her water bowl and she’s almost as tough as my wife. I don’t mess with either one.

In the kitchen, the decorative tiles around the backsplash still need grouting and the large openings I created for stor­age space above the cupboards also need to be enclosed. And one wall needs a sec­ond coat of paint.

The dining room, however, is com­pletely finished. Except for the trim around the built-in bench. And I need to build a table. And the floor needs to be patched where I removed a section of cupboards so I had a place for the new table that I haven’t yet built.

In the main hallway, the tiles need grouting. Big surprise there. Plus the ceil­ing should really be dry-walled. And the stairway that I moved and turned into a single flight instead of a reversing set with landing also needs a handrail. And the bottom six steps need to be tiled. And one wall needs painting as well. I’m beginning to see a pattern here.

Well, much like the renovations, it seems that this article will also remain unfinished. But much like the promises I frequently make to my wife: “It will get done. Sometime!”

Hmmm. I’m beginning to see just why my wife began looking for a new job when she already had a pretty good one right here.