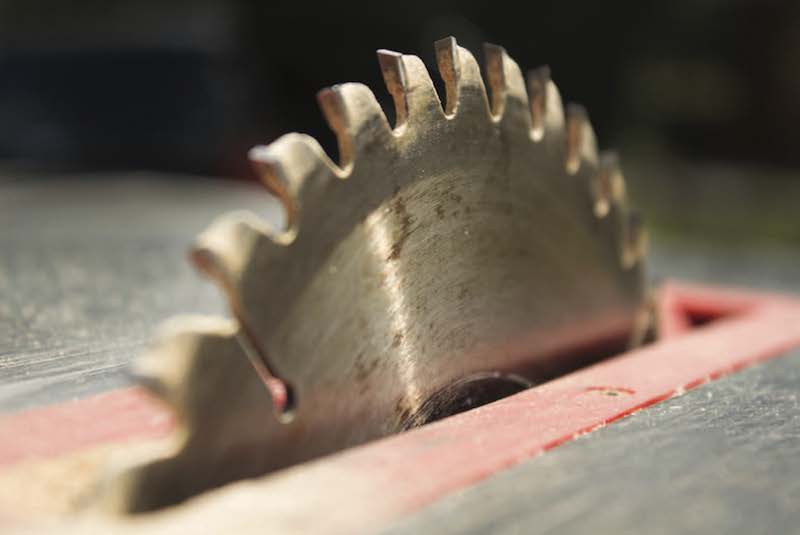 It’s funny how certain memories from your childhood stick with you, even when they’re buried deep down in your subconscious and you think you have completely forgotten about them.

For this column, I wanted to write something about shop safety. How important it is. Ways to stay safe. Common injuries. Yada yada yada. While there’s nothing wrong with those arti­cles (they can save life or limb), as I was researching shop injuries my mind contin­ued to wander back almost 30 years to a day spent at my best friend’s house.

The memory is faint, almost like a dream, so I must have only been five or six years old. I was at my friend David’s house, and my oldest sister was babysitting us along with his two younger brothers. We were in the playroom building something out of LEGO when the front door slammed shut, and we could hear his dad shout, “Marci!”

We poked our heads out the playroom door to see what the commotion was all about. He wasn’t panicked, and his voice remained calm, but I could see a shop towel wrapped around his hand. “Marci, can you call an ambulance, please?” he said.

It wasn’t so much a question as it was a calm, collected order. I never saw the blood or the injury itself, but apparently he had caught all or part of his thumb in his table saw. The doctor managed to reattach the finger without any serious complications (that I know of), but I don’t know if it was ever the same after that.

Long story short, always remember to use a push stick or push block when working with your table saw.

Fast forward to about 1:30 p.m. on Dec. 31, 2017 – New Year’s Eve. I was visiting my sister and her family when I got an omi­nous text from my mother. “Dad took the end of his finger off with the router. Sitting in Orangeville emerg.”

I got a sinking feeling in my gut. We’d just had breakfast with them a few hours earlier, and he was excited to get back to the woodshop to work on levelling some live edge slabs.

“Yeah. Just mad at himself and it should start hurting soon.”

He had just built a sled for his router so he could level the live edge boards, and the 3/4″ upspiral bit was doing a fantastic job when the vacuum hose got plugged with the sawdust and chips.

My father, always the safety-conscious guy, was wearing his ear protection and had the overhead dust collector running as well, and he decided to just place the still-running router down on the table and adjust the hose so the blockage might clear on its own.

With all the noise in the shop, “I just plain forgot the router was still running,” he said. He reached for the router, and all he felt was the vibration on his left index finger and a slight tinge of pain as the router dug into his flesh. He looked at his finger and – well, I’ll spare you the grisly details, but there was about 1/4″ missing from the end.

“I can’t really hide this,” he thought, as he called my mother in the house to tell her they had to go to the hospital.

A few hours later she sent me another text.

“Want to see pics, or not? Pretty gross.”

I couldn’t help but say yes.

Now skip ahead a few weeks, and I was back at the shop with my dad. Out of nowhere he asked if I had any intention of keeping up with this newfound woodwork­ing hobby.

Well, I guess he had started looking into getting one of those safety saws that shuts down immediately after it detects flesh has come in contact with the blade – you’ve probably seen the commercial where they slide a hot dog into the blade, and it shuts down with barely a scratch on the meat.

He started telling me what they cost, but we ultimately both came to the decision that it didn’t really matter – can you put a price on your hands? Or fingers? Or life?

The last thing I want to have to do is rush into the house with a towel wrapped around my hand, shouting at the babysitter to call 9-1-1.

Oh, and one last tip, if you’re ever researching “woodshop injuries” on the Internet, do yourself a favour and don’t click on the images.