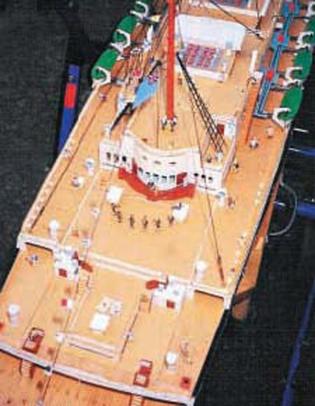 Take a look at the reverse side of the Canadian ten-cent piece and you will be reminded of the shipbuilding capabilities of Nova Scotians. 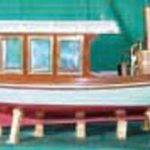 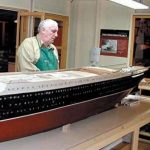 Take a look at the Marine Model Artists Co-op roster and you will soon realize that Nova Scotians are known to be skilled model shipbuilders as well.

Model shipbuilding is a growing hobby that has captured the interest and imagination of many woodworking hobbyists in Canada and the US.

Franconia rigged as a passenger liner
Pictured here is Bill Moore, one of the museum's volunteers, and a highly skilled model builder himself. The 1:148 scale model of the 'Franconia' was given to the museum by Cunard in 1955. Although the 'Franconia' arrived at the museum in pretty rough condition, it is expected that the full restoration will be completed by late this year in conjunction with the arrival in Halifax of Cunard's recently built 'Queen Mary ll'. 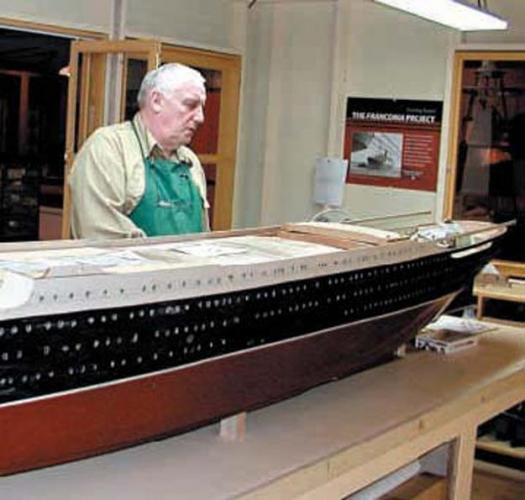 In fact, Haligonian John Green, a model shipbuilder for close to 25 years, and Dr. Sid Segal of California, founded the Marine Model Artists Co-op. This co-op is made up of 20 or so model shipbuilders, with about a dozen hailing from Nova Scotia. The Co-op was formed as an outlet for members of accredited ship modeling clubs to display their talents without charge or sales commissions. The entry criteria are extremely high and only a top-notch modeller can gain admittance.

John Green, like all modellers, does a lot of research before taking knife to wood. He searches out the original ships plans in archives and museums to ensure that his models will be authentic in every detail. A case in point is his model of the ‘Flying Fish’, a Grand Banks market schooner. Modellers take great care to replicate the original construction.

Philip Eisnor is a retired marine engineering technician, and distinguished professional ship model builder. Philip reproduced the ‘Three Sisters’, a nineteenth century mercantile schooner, built at Mahone Bay, Nova Scotia, in 1876 by his own grandfather. The ship model was taken from the original builder’s half hull model and includes deck furniture common to the era. All of the components and fittings were hand-built by Philip. A close-up view of the Three Sisters shows the details that these model shipbuilders typically emphasize. For example, every deck plank in the Three Sisters was individually laid and dowel pegged.

Ron Phillips, another Nova Scotian, built an amazingly realistic model of the ‘RMS Queen Mary’. It has an overall length of 63 1/2″, full interior lighting and over 120 scale figures on the deck. The model of the ‘RMS Queen Mary’ was built with a basswood hull and is fully operational with four motor-driven propellers on two electronic speed controls.

Phillips beautiful model of the ‘RMS Queen Mary’ recently sold for US$40,000. Robert Payne, another Maritimer, got a little sentimental with his model called ‘Countess’. The ‘Countess’ is a steam launch built from both original plans and contemporary sources. The sentimentality comes to the fore when one remembers Humphrey Bogart and Katherine Hepburn (Charley and Rose) in the now famous movie, African Queen.

Robert specializes in live steam models and the ‘Countess’ is no exception. Just looking at this exceptionally detailed steam launch conjures up thoughts of leech covered Charley hauling the ‘African Queen’ (and Rose) down the river to single-handedly attack a German warship.

Wally Moore is from Lower Sackville, Nova Scotia and is a professional model maker. Wally’s precision work is evident in his Brandenburg Galleon ‘Roter Lowe’ (Red Lion), a Dutch warship armed with 22 guns. Historic sailing ships are Wally’s personal specialty, which explains the incredible detail throughout his 29″ model. Wally used walnut, mahogany, and cherry in the plank-on-bulkhead construction, and he handcrafted most of the fittings himself.