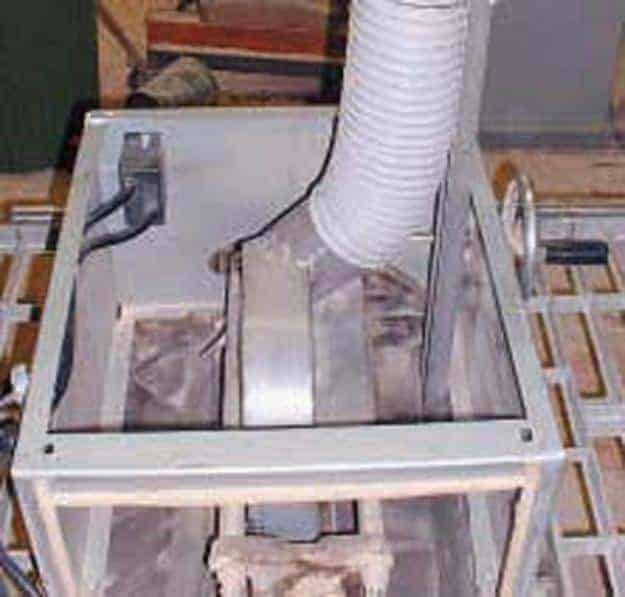 This article shows you how to fix shut off gates that don’t close properly. 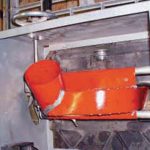 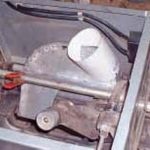 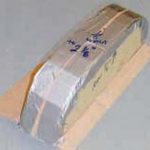 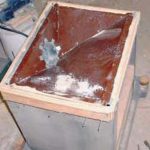 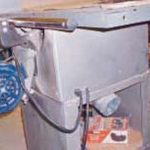 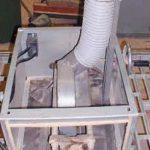 If you have unmodified plastic shut offs (or blast gates), then I’m certain that you have a few that just don’t close tight any more. Such gates can rob your system of much needed suction at the machine that you’re working on

The photo below shows a quick fix for such situations. I simply cut the back flange off the gate body, installed four pop rivets with backing washers in the side flanges (two per side) and installed a short piece of bare, 14 gauge copper wire, as a static jumper around the gate.

The backing washers ensure that the plastic flange doesn’t crack when the rivets are installed. The small gap along the back of the gate is only open when the gate is open, and the airflow is not enough to worry about. The opening allows for a cleaning airflow. It also allows the gate to expel any dust or shavings from its tracks when the gate is closed.

The top of the hopper with the saw removed from its base. Notice that the sawdust is piled up on the leading side of the hopper, and not running down to the outlet at the side. The preliminary design in cardboard 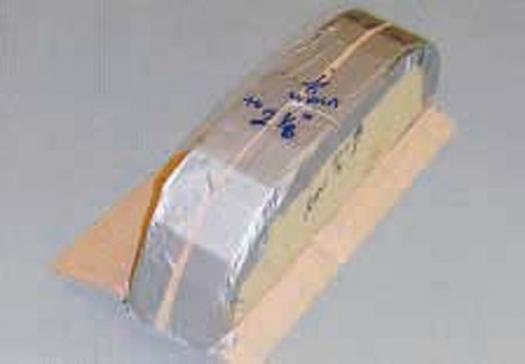 The Bristol board in position The results with the blade set to 90 degrees

The painted/sealed hood fastened in place 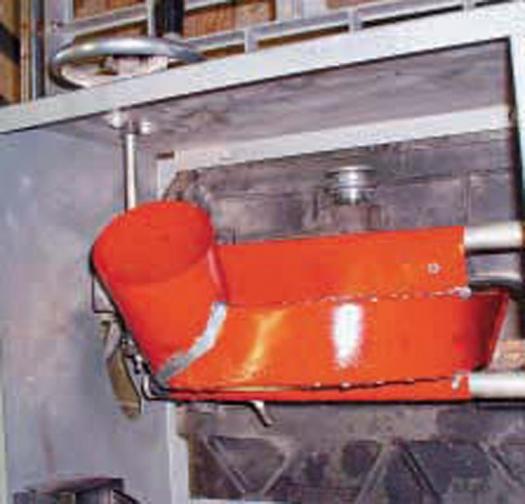 While changing my saw blade recently, I noticed that the saw was full of sawdust.
The dust removal hopper and the rear baffles were not doing as good a job as I thought.
When I saw the amount of dust that had built up with this set-up, I decided it was time for a makeover.

When I had originally designed this hopper, I thought that it’s sloped sides would guide the sawdust to the outlet more efficiently than the commercially available flat plastic saw plates. Although partially true, the slope of the hopper sides was not great enough.

I had also reasoned that the side outlet would give better access to hook up the hose and leave the bottom of the saw base free for storage. Well, that was then, and this is now, so I decided that there was no better time for a dust collection makeover.

Tearing down the saw was an ideal time for a good cleaning and inspection. I found that the stop for the blade angling gears needed to be repaired, so I did so before proceeding with the dust collection modification. (Safety Note: Always unplug machinery before working on it)

Once the saw was upside down, it was much easier to see and access the blade area. Using cardboard and Bristol board, I determined there was room to accommodate a dust collection hood. The most extreme position for the blade was in the fully down position at 45 degrees of angle. That position places the bottom of the blade near the wall of the saw body. Working from this position (using cardboard and Bristol board) I made a basic mock-up of the hood. I used a piece of 9″ pipe to trace out rounded ends on the hood’s sides (front and back). The outside width of the hood is the inside width, from the mandrel to the opposite trunion rod.

I then used the outside dimension of the mandrel sidepiece to determine the length of the base of the hood.

After some consideration, I decided that flanges fastened to the sides of the hood, and then fastened to the trunion rods, would be the best way to attach the hook firmly in place.

Once most of the hood was laid out on paper, I needed to decide what material to use. Welding galvanized steel is just a little beyond me, so a quick trip to the local Canadian Tire netted me a car body repair panel of 20 gauge steel. After cutting out the main parts of the hood, I tack-welded them together and placed them on the trunion rods to check the fit and blade clearance. At this time I made up a 4″ diameter paper tube and started to cut it to fit the hood. The photo below shows this process.

You must be careful here so that the dust hood outlet pipe is clear of both sides of the saw body, and that you leave enough room for the flex hose to be connected. I also wanted the pipe to be as close to the front of the hood as possible, so that the dust from the leading edge of the blade would be firing down into it. Note that the motor hangs off a bracket to the rear. The design of the base determined that a rear discharge would not be possible without major modifications to the saw base. Once I had formed the pipe from the sheet metal, and cut it to the paper template, I was able to determine how much of the hood bottom and side I could remove. After tacking this in place I clamped it to the saw trunion rods and added a short length of flex for a final clearance check.

Next I needed to determine how to fasten the hood in place without having fasteners located near the blade. On the mandrel side of the hood I was able to accomplish this by welding bolts on two brackets. On the other side of the hood, I opted to drill through the hood flange and trunion rod, and use a bolt to hold the hood securely in place.

Before removing the hood for painting I did some final tuning to the front edge of the hood to ensure that all the small cracks were filled. The hood was removed, painted, and then sealed with silicone. Preliminary testing shows that this hood delivers much better dust collection than the hopper had done previously. 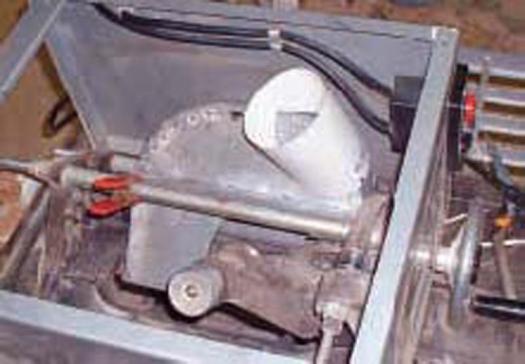 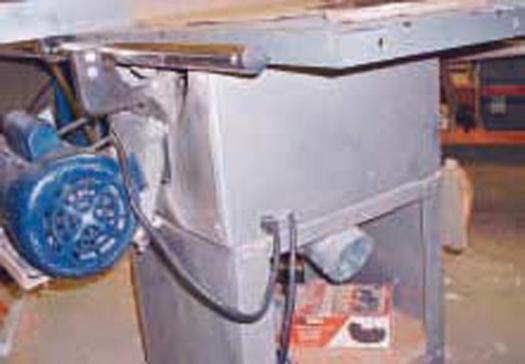