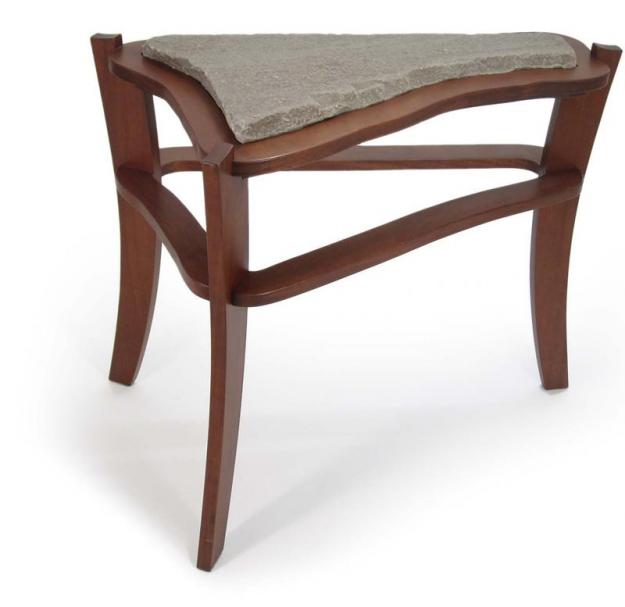 Some projects call for a whole new approach when it comes to joinery. 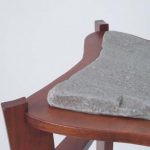 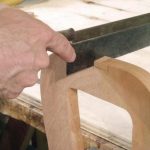 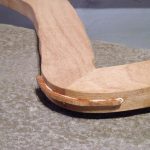 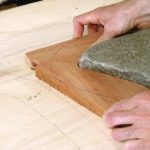 I often work with stone because it adds another element to a piece of furniture. Whether it’s an interesting texture, colour or shape, all will add to the finished piece. When stone is square, it’s fairly easy to work with, but in the case of this table the stone I was using was anything but square. It took some “outside-the-box” joinery to produce a strong table that would stand the test of time.

Shape the Wood to the Stone
After making a full-sized drawing for reference, you can start to shape the top pieces so they will fit the stone accurately. 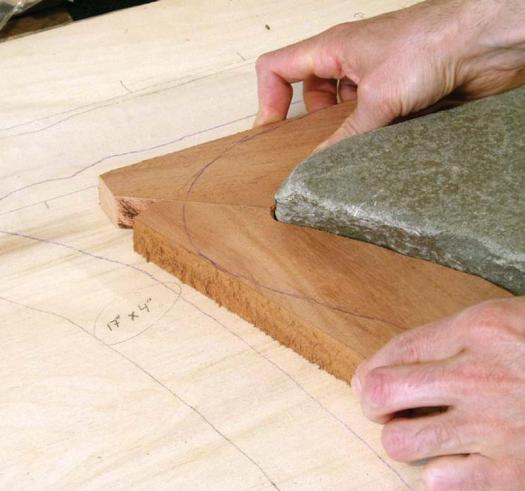 Additional Strength
A solid key is glued into the groove. This key will help reinforce the joint. 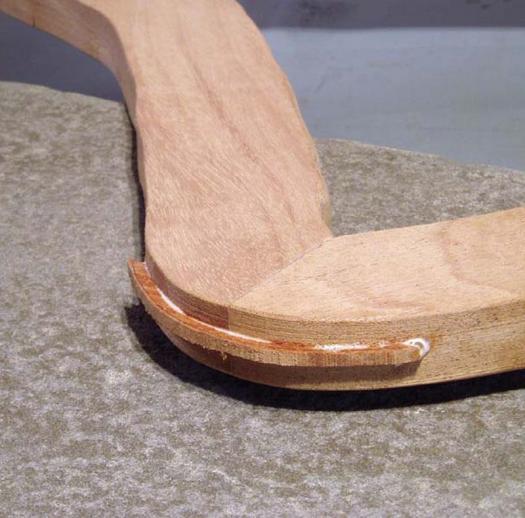 Notch the Top
To protect against racking and provide a flat surface to glue a notch is added. It will also assist with location during glue-up. 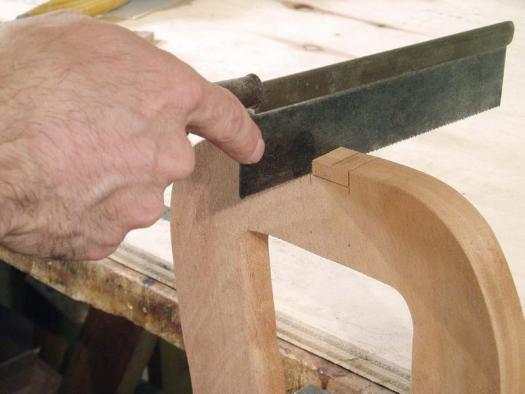 Stepped Surfaces
The steps are cut to mate precisely with the top assembly. 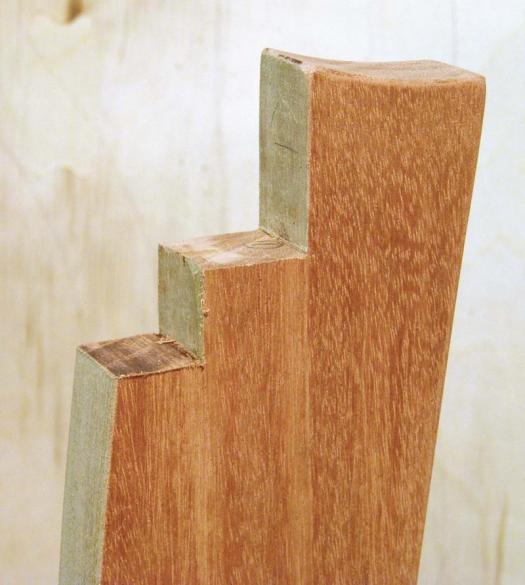 Staggered Joints
The leg has been attached with a screw and the plug has been inserted and trimmed flush. You can also see the fourth, smaller piece of the lower assembly. 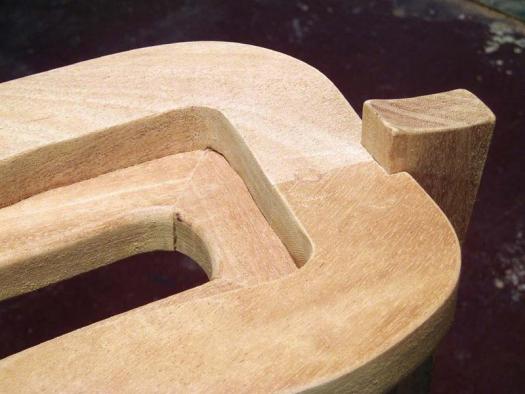 Strong and Invisible
The lower section of the top adds a lot of strength to the assembly and also provides a surface for the stone to sit on. Because it’s offset from the top, it won’t usually be seen when the table is complete (below). 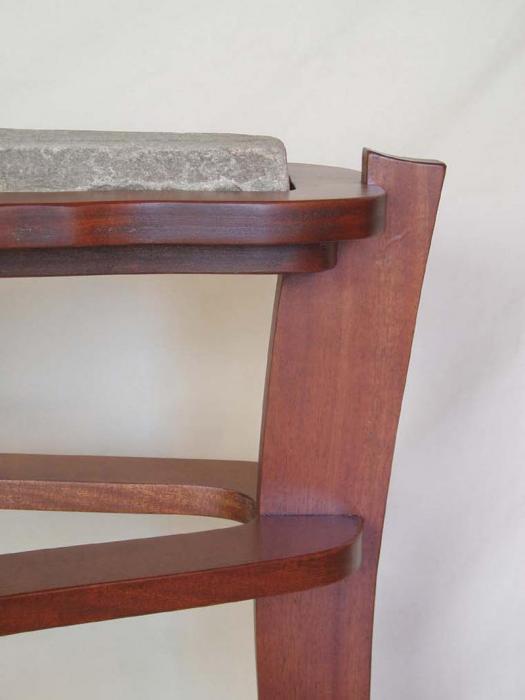 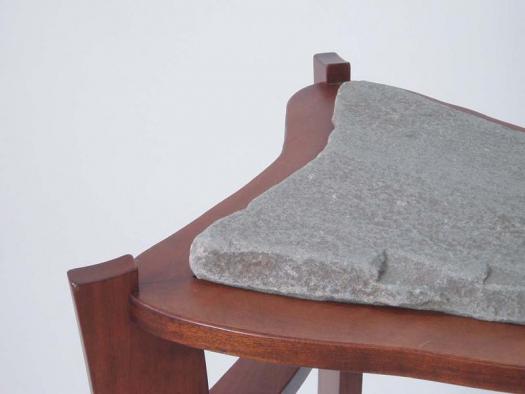 I started by creating a full-sized drawing on a piece of plywood.

This gave me something to reference when choosing and cutting the pieces. I then cut the three top pieces to rough size and shape. Once joined together, these three pieces would keep the stone from shifting during use. I carefully traced the contour of the stone onto each piece then cut the inside of each piece to mate closely with the stone’s edge. When all three pieces were fitted to the stone nicely, I cut them to proper length and at the proper angle so they would allow the stone to sit in the cavity. The joint near the narrow end of the stone is mainly side grain, so I could just glue those surfaces together. The other two joints were much closer to end grain, so I wanted to strengthen them a bit. I did this after the three parts were glued together by cutting a ¼” wide groove and inserting a key into the joint. I applied a size coat of glue to the end grain areas, followed shortly by another regular coat and glued the three pieces together. A ¼” dowel in each of the three joints assisted with keeping everything aligned during glue-up.

Once dry, I cut the outside edges to shape on the bandsaw, mimicking the inside profile. To add strength, I ran the two end grain joints (with the entire assembly standing on end) across a ¼” dado blade in my table saw. I used a vertical guide that ran on my table saw’s fence equipped with some temporary cleats to position the assembly. I glued the strips of wood into these two slots, let them dry then trimmed them flush. I then cut a notch in the top assembly with a handsaw to accept the leg. The notch was ⅜” deep and the exact same width as the legs. Its purpose was threefold: to add some racking strength, to provide a flat surface to glue each leg to and to provide some location assistance while fastening each leg to the top.

So the stone wouldn’t fall through this assembly, I added another layer of material under the top surface, offset inwards by 1″. The outside of this layer was cut to mimic the shape of the top. It is glued to the underside of the top assembly with the joints staggered from the top joints by about ½” for added strength. I used four pieces, instead of three, because I wanted to add a short piece near the narrow end of the stone, for strength reasons.

With the stone assembly complete, I turned my attention to the three legs. During breakout I kept them oversize and rectangular, so machining notches in them would be easier. A full sized pattern is crucial for laying out and cutting the notches in these legs. On the table saw, I cut stepped notches in each leg that corresponded with the mating area of the top assembly. Each set of notches had to be fine-tuned individually for an accurate, snug fit. Once the joints fit perfectly, I cut the legs to final shape and sanded everything. I then drilled a ⅜” counter sink hole and pilot hole through the top assembly into a horizontal surface of the leg.

After I machined the joinery for the stretchers (sliding dovetails), I assembled the three legs, one at a time. First I taped off the show surfaces so glue would not penetrate the wood fibres. I then applied glue size to any end grain. After waiting a few minutes, I applied a regular coat of glue to all mating surfaces and brought the joint together by driving a screw through the top assembly, into the leg. When all legs were attached and solid, I added a tapered plug and trimmed it flush.

Standard mortise and tenon, through dovetail and half lap joints are great – if that’s what the situation calls for. In many cases you have to invent new joinery to ensure a strong and beautiful piece of furniture. As long as you are knowledgeable regarding materials, machines and joint fundamentals, you have the freedom to try something a little different.