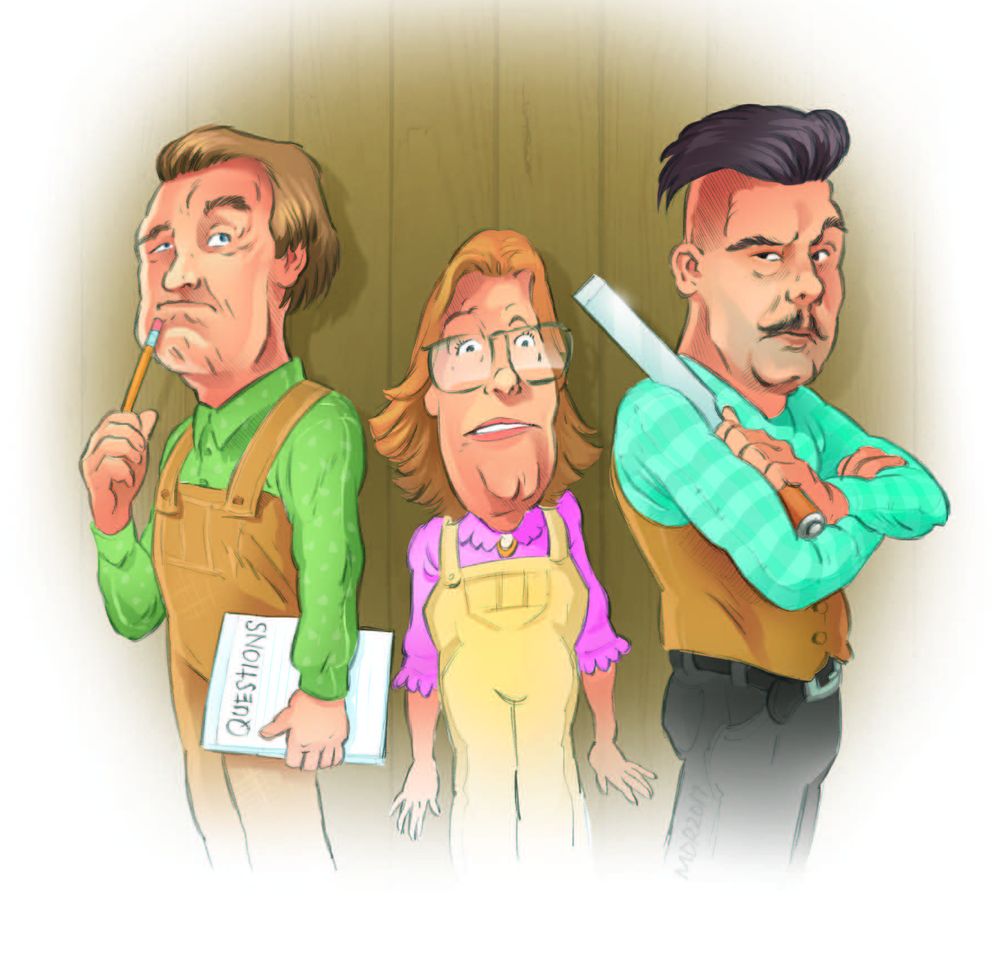 Students come in many types, but Don’s not sure why they have so many questions.

As some of you may be aware, I am employed by Lee Valley in Kelowna, BC. I use the term employed by rather than work for, on the suggestion – nay, the explicit instructions of – the store manager. I’m not positive, but I believe I may have been insulted.

From what I understand, which admit­tedly isn’t all that much, one of my duties at the store is to try to teach people about woodturning. For this purpose, they built an entire room and equipped it with a half dozen brand new lathes and what I can only assume is other equipment needed to learn woodturning. Then they printed a batch of ads and flyers extolling my teaching skills and the wonderful joys and benefits of woodturning. They might have been better off spending some of the money on a different instructor.

The ads must have worked however, and people had apparently ignored who their teacher was going to be, and every seminar date was booked solid in a mat­ter of just a few months. I believe the seminar coordinator finally resorted to dragging people off the street and offering to pay them to take the course.

The day of the first seminar arrived, as did my first student. Then, much to my surprise, a second one arrived, and shortly after they were pouring into the little room until we had students stacked to overflowing. It seems that woodturn­ing students aren’t all that bright, as several were there on the wrong date, oth­ers thought it was an annex of the UFC gym next door and the lathes were some new and slightly weird piece of exercise equipment. It seems that gym people are even dimmer than woodturners.

Eventually we got people sorted out, and I stood at the head of the class (the only time I’ve ever been head of any class) as the coordinator lied his little head off extolling my skills and expertise as woodturner extraordinaire. Woodworkers are quite obviously extremely gullible.

Then it was my turn. I was more than half expecting most of the class to walk out, but to my surprise they stood there listening in admiration as I rambled on. All except one guy who clearly thought he already knew everything about wood­turning, a woman who watched me closely but clearly didn’t grasp a thing I said and another guy who kept inter­rupting me to ask inane questions that I would have answered anyway if he only had a little patience, and if I had thought of them first. As any high school teacher will tell you, there are always people like those three in almost any class. I know, because I was quite often all of them.

Once I got the students started mak­ing a mess of their projects, I wandered from lathe to lathe, observing just how badly each one had paid attention to instruction. Typically, the lone woman was gingerly applying gouge to wood as if she were deathly afraid of the piece flying off and bonking her in the face. I’ve noticed before that women are more likely to be concerned about such a frivo­lous thing than men are. At the rate she was chipping away, her log would prob­ably rot off the lathe before she had a recognizable bowl.

The know-it-all man was having issues with his tools. He bitterly complained that they must have been sharpened incorrectly because they were so dull they couldn’t cut a strong cheddar, the lathe was cheap junk, the chuck couldn’t hold a piece of stale bread, and every­thing else he could think of that was ruining his lathing experience and was entirely my fault. I listened politely, then leaned over and flicked the switch to for­ward instead of reverse.

In the meantime, question-man had been pestering me about nearly every­thing I had already explained as well as a few things I maybe should have. As in, Should the lathe be turned on before or after I attach the wood to it? And, What side of the lathe is it best to stand on?

And my all-time favourite, the one that convinced me the man was a few knots short of a board, “These tools look sharp as a razor, will they cut me if I run my finger along the….ow! Son-of- a-B&%[email protected]#.”

Yes, teaching can be frustrating. But every once in a while, a student comes along that makes it all worthwhile.

I’ve never had one of those.