Surface preparation is a key process in fine woodworking. This article is about techniques that are commonly used in all fine furniture shops, including some tool-tuning procedures that will make the job much more enjoyable. We will explore what happens after our wood is dimensioned using machines. What comes after the planer? I enjoy using machines, but prefer the steps that follow; where my hands and eyes do the work that makes the difference between being a technician and becoming a craftsman.

Initial Pass
The first step is to remove all the machine marks with a hand plane. The shavings that result from this step are fairly wide. 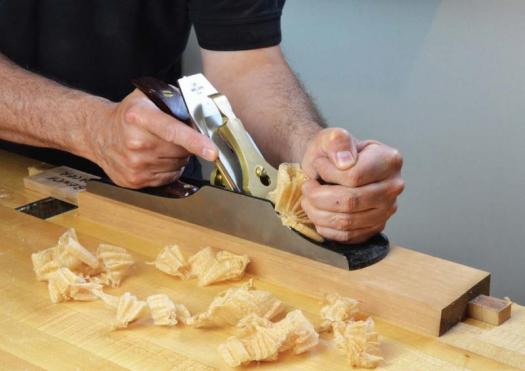 Finishing Shavings
To remove any marks left during the first step readjust the plane to take a very fine shaving. ¾" wide shavings will be produced as you work your way across the surface. 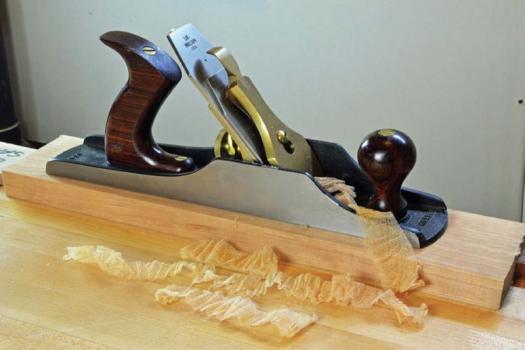 Tuning a Scraping Plane Blade
With the help of a thin ruler, polish the back of the blade. The ruler speeds up the process by allowing material to be removed only near the cutting edge, as opposed to the entire surface of the blade. Next, hone a micro bevel, similar to any other blade. The final step is to use a burnisher to create a tiny but strong hook. 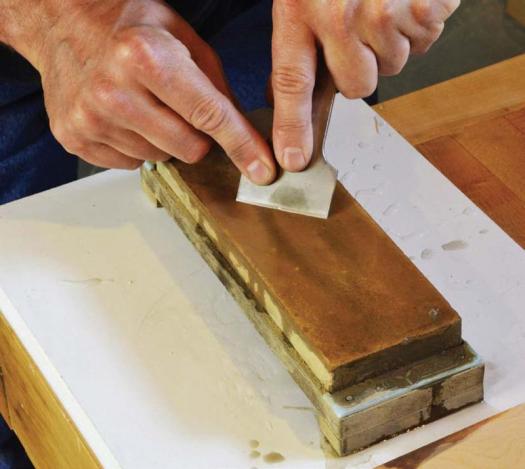 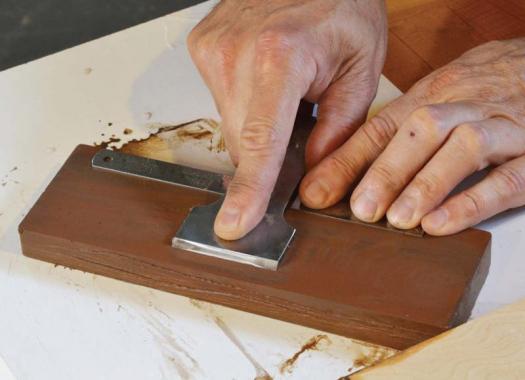 Make the Hook
After filing the edge, take several passes on a stone to flatten the two broad surfaces of the card scraper. Tilt the scraper 90° and take several passes on the same stone, removing the file marks. At this stage, you’re ready to create the hook on both sides of the scraper with a burnisher. Though this step takes some practice, it doesn’t take long to produce a proper hook. 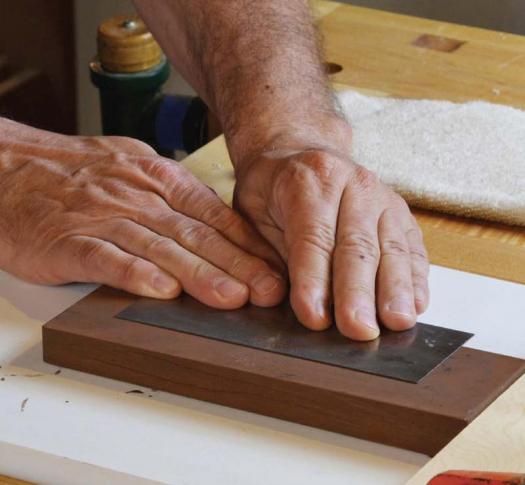 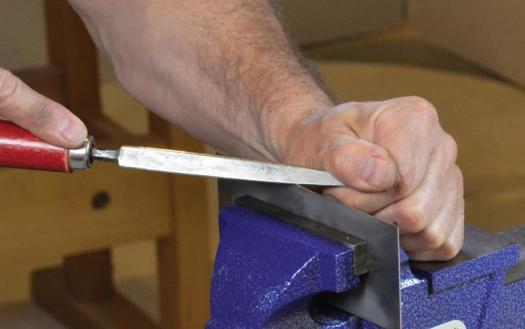 Shavings, Not Dust
If you’ve sharpened your card scraper properly, you will produce shavings. Dust is the sign that something isn’t right. Working with a card scraper takes a little experimentation. 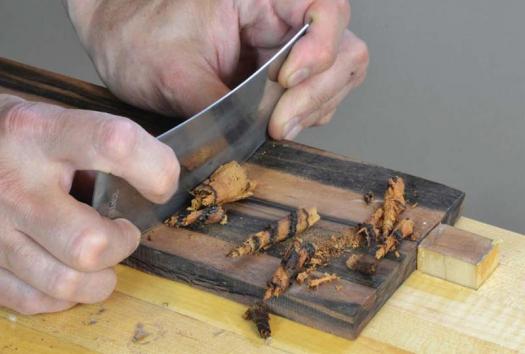 he Pay-Off
In the end, all your hard work pays off with a gorgeous surface that begs to be touched. 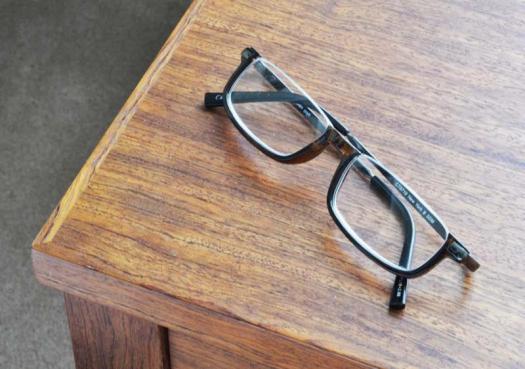 We will look at using a hand plane, a cabinet scraping plane and a card scraper.

The hand plane makes quick work of machine marks but does not always do well with reversing grain. If we are working on large surfaces with complex grain patterns, the scraping plane provides the right attack angle, combined with a reference surface to maintain a flat surface. The card scraper is the best value in your shop. For $4, you have a tool that can remove old finishes, clean up torn grain, and shear small problem areas to a near perfect finish right off the tool. I still use sandpaper. Although it is a wonderful challenge to perfectly shear an entire surface and then go directly to finish, it is more efficient to get the surface in good shape, and then sand with either 320- or 400-grit paper.

For this article, I will assume that you have tuned your plane such that you have a razor edge, a small camber and a flat sole. You may use a #3, #4, or a #5 plane for this process. I actually prefer a Jack plane on larger surfaces, because the longer sole avoids tracking into depressions, and the longer toe section gives me a better flat reference to the surface before the iron gets to the wood.

The plane provides us with an attack angle (the angle at which the blade enters the wood) of 45°. This produces a number-one type of chip, meaning that the wood is cut at an angle whereby the chip will tend to split ahead of the blade. A plane with a flat sole will hold the wood down and reduce splitting ahead of the cutter. Keeping the frog forward, and thus a small mouth opening, will help hold the shaving down until it rolls up the blade and the chip is broken by the chip breaker.

Hand planing consists of two types of cuts. First, with initial cuts we flatten the material removing ripple and snipe left by both the jointer and planer machines. Second, we adjust the plane to make finishing cuts, to remove the scallops left by the initial cuts. Initial cuts should be wide, about ¾ of the width of your two-inch-wide blade. For those who like numbers, the thickness of the shavings should be in the range of 0.005″ thick. To “eyeball” the thickness during setup, just remember that the shaving should be nearly transparent – that is, you can read text through some of the shaving – but perhaps not in the middle where the cut is the deepest.

Make a series of initial cuts along the length of the board, moving the plane laterally about ¾” between passes. I usually go over the surface twice to remove machine marks and all remnants of machine made snipe near the ends of the boards.

Now re-adjust your smoothing plane to make finishing cuts. The idea here is to take very small, very thin shavings with only the middle ½” of the blade. Make a cut, and then move the plane over by only ⅛” between passes. This will remove all of the first cut scallops left by the smoother due to the camber in the blade. When you set up for finishing cuts, the ½”-wide shaving should come from the middle of the blade, and it should be transparent (about 0.001 to 0.002″ thick). I go over the entire surface twice, indexing laterally between cuts by only ⅛”! At this point, the surface will be incredibly smooth. You can actually look at the surface at an oblique angle, and see a reflection in the wood surface.

Purists, close your eyes now! I then sand the surface using 400-grit sandpaper and a softwood sanding block. Generally I use ¼ of a sheet of paper, and wrap it around a 5 x 2 x ¾” block of pine. Sand with the grain, indexing over by about one inch per pass. Lift the block between passes to avoid creating a diagonal sanding pattern.

The Lie Nielsen #85 scraping plane is a favourite tool of mine. I prefer it to a Stanley #80-type cabinet scraper because it offers a significantly longer sole, a thicker blade that reduces vibration, and the comfort of a small smoothing plane in use. When the attack angle exceeds 55°, the type of shaving produced is referred to as a type two shaving. Essentially, the shaving is bent to a point of breaking, right at the cutting edge. This tends to greatly reduce the amount of tear-out, and therefore provides a significant advantage when we are working on woods with fierce reversing grain such as quarter-sawn African bubinga.

The shaving from a scraping plane is not as clean as a smoothing plane, so it is a given that some sanding be done before finishing – in this case, I use 320-grit paper, followed by 400-grit. The blade on the #85 is about ⅛” thick, and made of A2 tool steel. The steel provides a very resilient cutting edge, while the thickness of the blade reduces chatter in the cut. Set up the tool with the blade against the back of the mouth and the blade will be rock solid. A small mouth on a tool that makes type-two shavings is not required.

Blade preparation for the scraping plane

Blade preparation is critical to the performance of the scraping plane. Grind the primary bevel at 45°. Add some camber by spending more time at the edges of the blade when grinding. You can check your progress while grinding the camber by placing the leading edge of the blade against the stock of your engineer’s square.

Use the “ruler trick” to raise the blade slightly on the wet stone, and polish the leading edge of the back face of the blade. Hone the cutting edge to a micro bevel, in the same way you would prepare a smoothing plane. Now, create a tiny hook on the blade using a scraper burnishing tool. Hold the bar of the burnishing tool flat on the primary bevel of the blade, and then raise the burnishing tool another few degrees (two to five). Make only one pass across the leading edge of the blade, with moderate pressure. The goal is to create a hook that is tiny, yet strong, and not serrated.

Place the blade in the plane, lower it until it contacts the work surface and snug the locking screw. To advance the blade, use a tiny Japanese plane hammer and strike the back end of the blade.

Joint the long edge of the card scraper, by taking six strokes with a mill bastard file. Remove any burrs by placing the broad face of the scraper on a 1000-grit stone and taking several passes on either side. Now, put the scraper on edge and move the scraper across the stone to remove the file marks.

Grasp the scraper like you wish to break it in half, with fingers wrapped around the short ends, and thumbs touching in the middle. Flex the scaper into a bow, such that only about one-inch of the cutting edge is in contact with the wood. Your thumbs should drag on the wood and the attack angle of the card scraper should be about 45° to 60° to the wood surface.

The card scraper is the cheapest, and sometimes the fastest and most valuable tool in your shop. It is for small repairs only, as well as for clean-up on curved surfaces after bandsaw cuts. Try cleaning up a cabriole leg after it comes off the bandsaw and you will be amazed how fast this tool cleans up the rough surface.

I use a block plane for this purpose. Set the plane for a rather aggressive cut. Place the sole on the arris (edge) at 45° and take three passes. Now alter your sole angle to the first surface from 45° to 22° and make one pass. Now alter your plane angle to 22° from the adjacent surface and take the last pass. I call this my 1-2-3, 4,5 method. It shears off the arris cleanly and avoids a wandering edge treatment since the sole of the plane does not dip into hollows. Use 400 grit sandpaper to smooth the very small facets left by the plane.