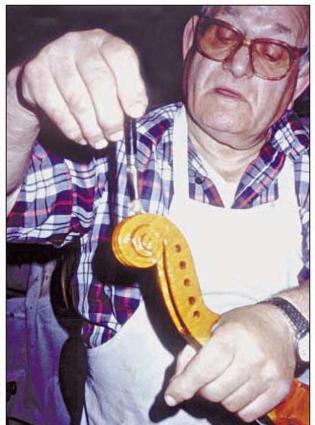 This article is about a unique and talented man, who many describe in just two words: “a character.”

We all take away distinct memories from each wood show: the excitement of purchasing new equipment, finding that rare wood, learning a helpful tip from a vendor or meeting someone special who makes you smile.

Lewis Cohen is a regular at most Ontario wood shows within a two-hour radius of Toronto. I met Lewis for the first time, while attending an Ontario Wood Carvers Association Wood Show in the early 1990s.

He was sitting behind a table, carving a small boot. In front of him, was an army of woodcarvings. They were all neatly arranged in rows, staring out at the admiring public. I recall glancing his way. He responded with a quick smile and started talking to me. During this conversation, he reached into one of the rows and picked up one of his carvings. It was a “howling hound dog”. He said, “This is for you.” and handed it to me. I left his table beaming. I had never expected to be given a carving, especially by a total stranger. I am sure that many of you have shared this same experience, as Lewis is as prolific a carver as he is a gift giver.

At the Woodstock Wood Show this year, I worked in a booth next to his and watched the public and other exhibitors interacting with Lewis. He made young and old smile as he entertained them with his stories. They all left with some form of a “gift” from him, whether it was advice or a small carving. On the last day of the show, I asked him why he gives his carvings away. He replied that he has done this since he started attending wood shows, roughly 12 years ago, because he enjoys sharing what he carves. He mentioned that he had given away close to 100 small carvings at the show already. He then quickly added, in a serious tone, but with a glint in his eye, that he only gives his carving to the ladies. At 86 years old, I believe this is Lewis’s prerogative!

Lewis Cohen was born in Toronto in 1915. At the age of eight he learned how to play the violin and, in his teenage and early adult years, performed at many concerts. He played symphonic music at Massey Hall and at other renowned venues in Toronto.

His parents came from Europe and he followed in his father’s footsteps by becoming a Master Butcher. Lewis and his wife raised six children – four boys and two girls. In 1982, he was 27 years old when his wife passed away. The year thereafter was filled with deep despair for him and he stopped working. His daughters urged him to return to school. A week before Christmas in 1983, he signed up for a violin-making course. Having been a wood worker throughout his life, Lewis quickly caught up with the other students who had started the class in October.

Lewis has not looked back. To date he has made a total of seven violins and two violas. He currently has two violas in progress.

In Lewis’s opinion, it doesn’t matter if you are carving meat or wood, your knife has to be sharp. He predominantly carves with Flexcut palm tools and knives. He uses 600 grit followed by 1500-grit wet/dry automotive sandpaper to sharpen his tools. He hones them on a piece of off-cut leather, which has been covered with a layer of medium valve grinding compound. He occasionally finishes his carvings with Flecto Varathane, but mostly leaves them natural.

He created a thumb protector to prevent his thumb from being cut by his sharp tools. It consists of a small rectangular piece of soft, off-cut leather that covers the inside aspect of the thumb. It is held in place by a wide 1” band of elastic that is sewn onto it and forms a tunnel for his thumb to rest in. Lewis told me a funny story about a carving club member who enquired about how he made his thumb protector. When Lewis told him, “tongue in cheek”, that it was made from the tongue of his shoe. The carver promptly reached down and cut the tongue out of his own shoe, placed it over his thumb and held it in place with a few elastics. By the next club meeting the carver had a wide band of elastic neatly sewn onto his shoe’s ex-tongue!

Lewis has a broad range of interests which include cooking, woodworking, instrument making and, more recently, woodcarving. While it is apparent that Lewis loves to joke and share his experiences, he also has a serious side. He is an independent and creative thinker. He looks at a task from an analytical perspective and seeks to gain knowledge through his own learning and experience. Lewis attributes this approach to his father. When he was young, his father helped him to learn by ensuring that Lewis worked out solutions by himself with careful guidance, versus being told how to do something. For example, he once offered to make a viola for a friend’s son, to replace the one that was stolen from him. At the time, Lewis had no active playing knowledge of the instrument. He began painstaking research and completed the precious viola in six months! His friend was overjoyed.

Lewis shares his talent with a variety of interesting and sometimes famous people. Lewis’s generosity extended to Mayor Mel Lastman, who can now rest his weary feet on a footrest made out of 100 pieces of black walnut. Lewis stresses that even though he still thrives on being active, he only works on projects when he is in the mood. However, he willingly spends many hours in his community helping seniors with their carving and promoting the art of woodcarving.

At wood shows, Lewis enjoys the company of his personal friend, Neil Cox. I spoke briefly to Neil about Lewis. Neil shared a story about their first meeting in the late 1980s. Neil was demonstrating carving at the CNE show. Lewis came over to talk to him and, before long, had offered Neil some steel to make his own knives. In exchange, Neil gave Lewis the small carving he was working on. They have been friends ever since. In Neil’s words, “Lewis has taught a lot of people to love woodcarving.”

While talking to Lewis and watching him carve, I marveled at the strength and dexterity in his hands and fingers. This was apparent in spite of the arthritis which he told me had cut short his violin playing days.

Lewis, I hope you have many more carving, furniture/instrument-making and cooking days ahead of you! Most of all, I thank you, on behalf of all those people who have benefited from your kindness and knowledge and who may have, in their possession, a small wooden carving with the words written on it, in pen: “By Lewis Cohen with love”.