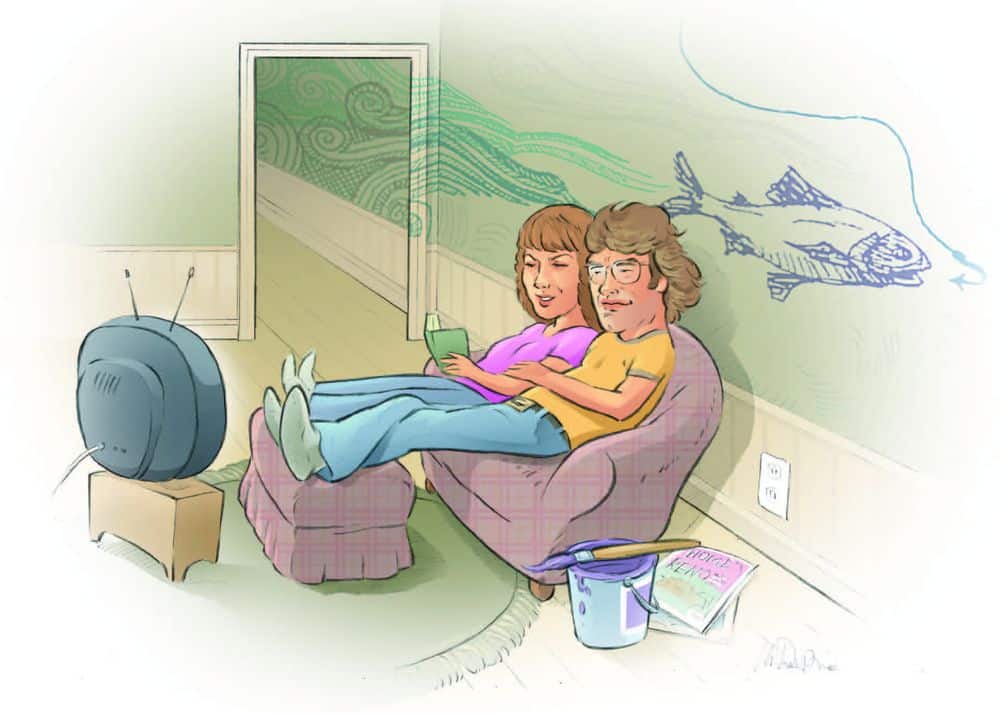 It is the first day of February as I write this, which means the most wonderful day of the year is fast approaching. No, of course I don’t mean Valentine’s Day; that’s the most stupid day of the year. And I don’t mean Groundhog Day either, but at least it isn’t as dumb as Valentine’s Day. No, I am referring to my 29th or possi­bly 36th anniversary. (It also happens to be my wife’s anniversary, but she’s less inclined to celebrate it than I am. Can’t figure that out.)

This has all been a rather roundabout way of getting to the point. No matter how long you have been married and no matter how much you may love, or even be loved by, your spouse, there comes a time when all home renovations must come to a halt, never to be raised again in mixed company or whenever there are children present in the same town. Our personal Armageddon is fast approaching.

Our first foray into renovating began within the first two months of marriage, when I painted a monochromatic mural down the length of our apartment hall­way and extending into the living room. Luckily, the landlord appreciated fine art. The fact he had cataracts in both eyes likely helped as he never objected to the renos I performed on his beloved Victorian. Since then I have never looked back, so I figure it’s all his fault. I could have been stopped years ago.

The first place we actually owned was a log house I built about 20 kilo­metres outside of Whitehorse. It’s much more difficult to renovate a house in which the walls are 16 inches of solid pine, but I managed! I even managed to set fire to my electric chainsaw while attempting to cut a doorway through a wall to access the new bedroom I added on. Such pretty blue flames they were. And they shot out the side of the saw such a long way, too.

Our next house was a quaint and won­derful old place that didn’t appear to have changed one iota since it was built – probably the day before we bought it, considering it was located in Southern Ontario. By the time we moved out 10 years later, we had done everything it is possible to do with a house and still remain on the same foundations. The only thing we left original was the oak flooring we discovered beneath the decades of cigarette smoke and the red brick (what else?) exterior. Luckily for me, all my renos had been either previ­ously approved or been later forgiven. Or at least accepted.

We purchased our present home about 18 months and 20 years’ worth of reno­vations ago. It is truly amazing what someone can do when they have the time on their hands and a wife who goes visiting grandchildren three provinces away at the drop of a diaper. Our master en-suite is nearing, or at least somewhat nearer to, completion after our son-in-law helped with the ceiling drywall and fan installation over the Christmas holi­days. The tiled walls surrounding the bathtub are completed and looking very pretty now that the tiles are behav­ing themselves. The new lighting works almost all the time, and although I still need to reseat one or two wobbly floor tiles, the in-floor electric heating works just fine. We hardly even notice the tin­gling in our feet anymore when we step out of the shower.

Something still needs to be done for the bi-fold doors to close properly across the laundry alcove. Like buy some. Still haven’t done that yet. The dryer also needs to be shoved a little further back, but the shelf behind it first needs to be raised for it to slide under.

I’m thinking it might be easier to just drill a hole in the floor under each dryer leg so it drops down those few necessary inches. I can probably get at it from the wine cellar, but the floor-to-ceiling wine racks are currently filled with my books, and they’re certainly not going anywhere in a hurry.

My dear wife will soon be leaving for a sister’s holiday. She pretends that she doesn’t want me to do anything but I’ve caught on to her little tricks. This time she insists she just wants me to relax and not do anything at all to surprise her. But I know she’s really just kidding.

Happy Anniversary, Dear. Whenever it is! Was! Whatever!