Home Techniques and Tips Wood Chuckle Tools of the Trade

Tools of the Trade 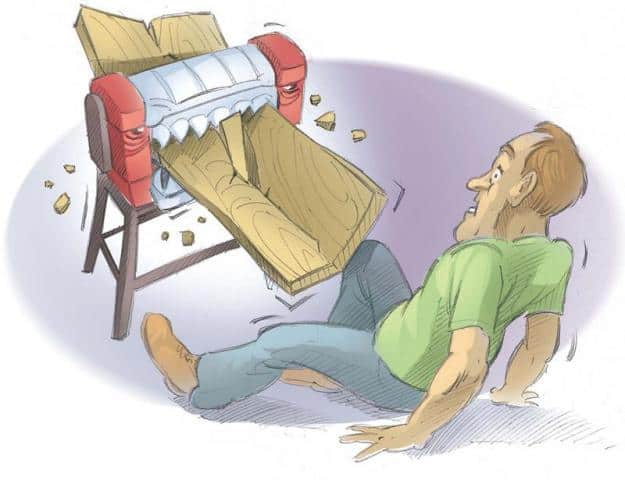 There is a maxim to do with woodworking that we all know, and must heed, and prepare for. Okay, it’s not really a maxim but it should be. I call it, ‘Wilk’s Maxim of Woodworking’.

My maxim clearly states, “Anyone who works around sharp, and/or pointy things will sooner or later hurt themselves.” That’s rather to the point, and is very clearcut, isn’t it? Sooner or later it will happen to you, so prepare yourself for the eventuality of it.

Sure, there are people out there that claim they have been woodworking for 156 years and they haven’t had so much as a bad splinter. To those people all I can say is, “Liar, liar.” Either that or they’re just not trying hard enough.

If you gather two or more woodworkers together in a room, sooner or later, (surprisingly sooner) the conversation will swing around to the injuries and maimings they have experienced. If you listen long enough, someone will even claim they were killed at some point by a tool or errant piece of oak or poplar. Well, probably not poplar, who would ever admit they died because of poplar? Not a macho wood!

I sometimes think the only reason anyone gets into woodworking is so they can garner respect from their peers by the accumulations of scars, amputations and other such wounds. Just as every woodworker has a favorite tool, they also have a tool they hate. Some woodworkers are even convinced that a particular tool actively hates them, and spends its spare time in the cupboard or on the wall plotting just how it is going to get its revenge on them.

Well, let me tell you, that is just plain stupid. If you think like that then maybe woodworking isn’t for you. You have serious problems of paranoia and should seek help. Believe me – the tools simply do not care. They’re perfectly willing to hurt anyone. It’s not just you they’re after.

Being the past owner of a do-it-yourself woodworking shop, I have taught and watched, both neophytes and experienced woodworkers, as they move around the shop turning large boards into small and then joining them back together again into beds, hutches, toys or just sawdust. Within a remarkably short time it is possible to pick out which tool it is that any particular woodworker fears, and as everyone knows, that which you fear, you will grow to hate.

I have watched people give a table saw a wide berth but were more than willing to use a handsaw to rip 300 board feet of two inch thick maple by hand rather than turn on the saw. I was fine with that since they rented my shop by the hour, but that’s plainly ridiculous. I eventually removed all the safety posters after noticing newcomers’ reactions upon reading them. Those posters instilled more unnecessary fear than all the horror stories I could ever come up with. It’s difficult and dangerous to use tools when you’re timid or terrified of what the tool might do to you. That’s not to say you shouldn’t respect them, however. Especially in the morning!

One person was so leery of the chop saw that she would jump and let go of the handle every time it started up. The kickback startled her every time and she was never able to use it properly. I ended up performing all her crosscuts for her. She had no problem with the table saw or jointer, however, even though they are both infinitely more evil.

Another client was perfectly willing to use three inch diameter shaper bits but was terrified of routers. He would also gleefully use the table saw to make cuts that I thought were just plain foolhardy, but I could never convince him to use a push stick. That’s where a really good liability waiver comes in handy.

Every single person who used my shop was afraid of at least one tool and their fears were groundless since none had ever been injured or even knew of anyone who had. In fact, in all the years I owned that shop, I am proud to claim that I never had a single injury occur there.

However, if we meet and you reach to shake my hand, please don’t stop to count my fingers.