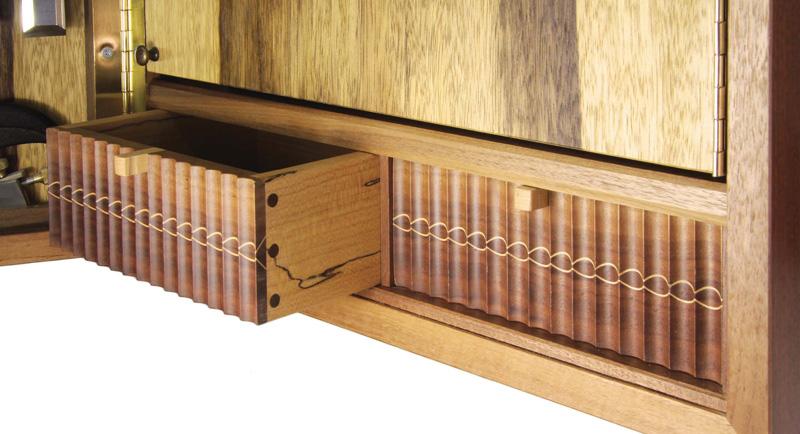 Figured wood would have looked great, but this technique adds texture and line to this pair of drawer fronts. 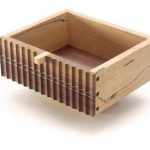 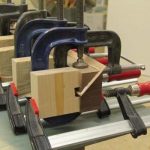 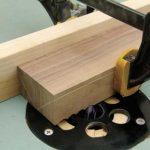 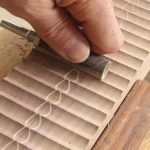 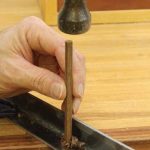 These two small drawers provided me with an opportunity to try something completely new. I considered many ideas, but what drew me to this approach was the rich texture that would be left. I also liked the strong effect a simple piece of contrasting veneer would add.

I broke out the walnut blank about 6″ longer, 1″ wider and 1″ thicker than the finished face required, so I would have some wiggle room if something turned out different that I had anticipated. I bevelled the blank so the cut would occur slightly beyond the center of the lower face being cut. I then cut a piece of maple veneer and glued it between the blank and the offcut. This was tricky, as clamping pressure is usually applied perpendicular to the glue line. In order to get around this unwritten rule, I made a number of blocks from a jointed 2×4, then notched their faces so the veneer could protrude into them. The blocks held the front face of the two walnut pieces even, while the glue dried. I then trimmed the excess veneer, bevelled the opposite side of the block and glued another piece of veneer between the blank and the mitered offcut, using the same blocks.

Bevel the Blank
Once the walnut blank is square, cut a bevel into one side so its bottom surface is divided in half. The bottom surface will be the front surface of the drawer fronts. Complicated Glue-Up
To glue the first strip of contrasting veneer between the two pieces of walnut, make five notched glue-up blocks. Clamp the blocks to the face of the larger piece of walnut (red F-clamps), then apply the glue. Next, apply light pressure across the blank (mainly blue C-clamps) then apply pressure in the opposite direction (grey C-clamps). Evenly add a bit of pressure from both sets of C-clamps to tighten the joint. Not much pressure is needed. 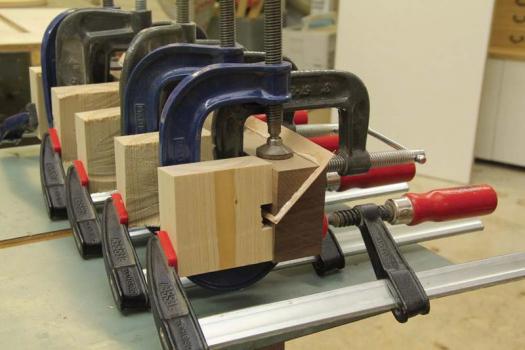 Rout the Grooves
After cutting the first groove near the end of the blank, I marked where the edge of the blank was against the mitre gauge. I then measured the width of the groove, and added a series of lines on the back of the blank to assist me in making the rest of the cuts. 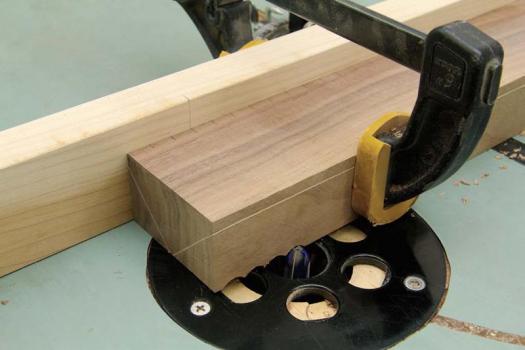 Simple Sanding
I chose a router bit that was the same diameter as a sanding drum I had. This made the task of sanding much easier and faster. 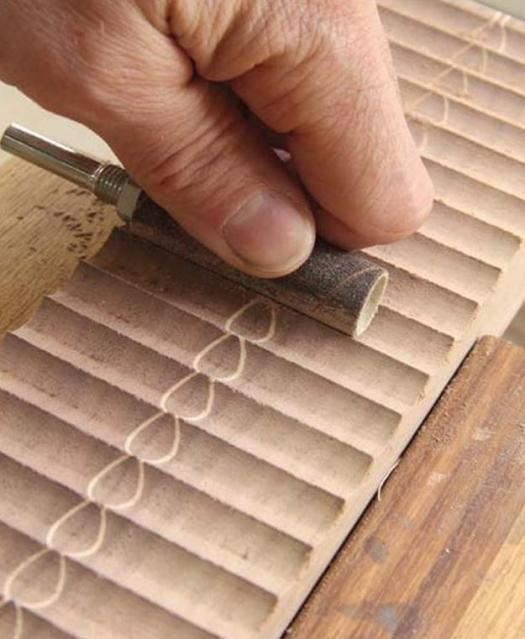 A Square Peg in a Round Hole
After cutting a square length of walnut slightly over 1/4" I rounded the four corners with a block plane, tapered one end and hammered it through a 1/4" diameter hole drilled in angle iron. 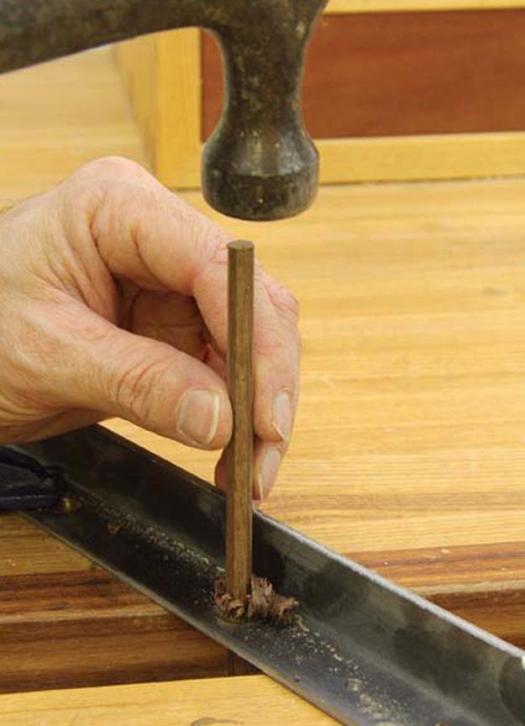 With all the veneer trimmed flush, I jointed the face of the blank until the two maple veneer pieces met at the same point on the face. The blank needed to be squared up slightly, but while I did that I made sure to keep the visible maple edges on the face parallel with the edge of the blank.

To make the series of grooves on the front of the drawer face I installed a 5/8″ core box bit so it protruded about 1/8″ above the table’s surface. Any higher and I thought it would create end-grain high points on the drawer front that were too weak. Also, when choosing the diameter of the bit I kept in mind the spindle sanding drums I have. By matching the router bit diameter with the diameter of one of my sanding drums I could use the drum to perfectly sand the inner surface left by the bit. This was a huge help down the road.

With my mitre gauge in my router table, I clamped the blank to it and made the first pass near one end. Before I unclamped the blank, I marked where the end of the blank lined up on my mitre gauge face. I then measured the width of the cut the router bit left and marked a series of lines on the back of the blank that exact width apart. I added an extra 1/8″ in the center of the blank so when I cut the blank in two the grooved pattern would not be disrupted. This series of lines, coupled with the single line I made just after I made the very first pass, allowed me to reposition the blank repeatedly and evenly without measuring every time. This not only helps improve production, it reduces the chance of measuring mistakes. I then positioned, clamped, routed, unclamped and repeated the process until the entire face was covered with little mountains and valleys.

I then split the blank in two, cut the drawer fronts to size and sanded them with my spindle-sanding drum. To add the small pull I cut a 3/8″ wide dado on the tops of each front and fit a tiny maple pull into it. It doesn’t offer a huge grip, but it’s more than enough for this application. I didn’t want to ruin the effect of the textured fronts with an obtrusive pull. I broke out the 7/16″ thick spalted maple sides and backs and ran a groove to accept the drawer bottom. The back needed to have the lower section removed so the back could be inserted. To secure the back to the sides I cut a 1/8″ wide groove in the side and machined a mating tenon on both ends of the back. To join the sides to the front I opted for a pegged rabbet joint. It’s simple, more than strong enough and I like the finished look. Once the rabbets were cut I sanded the insides and glued each drawer together.

To make the 1/4″ dowels that strengthen the front rabbet joint I cut a long piece of walnut just over 1/4″ x 1/4″ square. After slightly rounding the four corners with a block plane I rounded the end of the dowel blank and forced it through a 1/4″ hole drilled in angle iron. This produced a perfectly sized dowel. Once I drilled the dowel holes I applied glue, tapped the dowels into place then cut them off. The only thing left to do was install the bottoms before fitting each drawer to its opening. 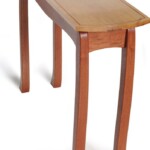 Designing a Hall Table
There are so many things... 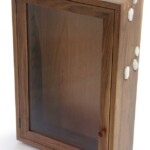 Meteor Cabinet
The contrasting colour of the...

A Unique Way to Wrap Presents
While you’re wrapping presents this... 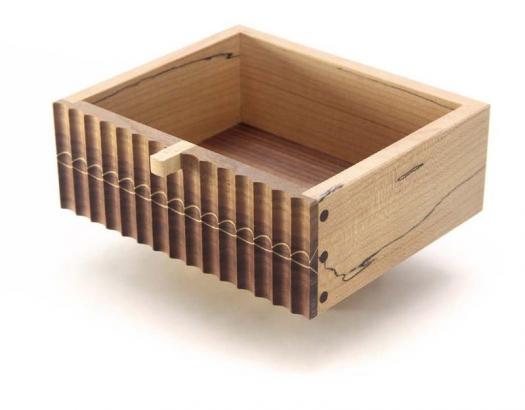