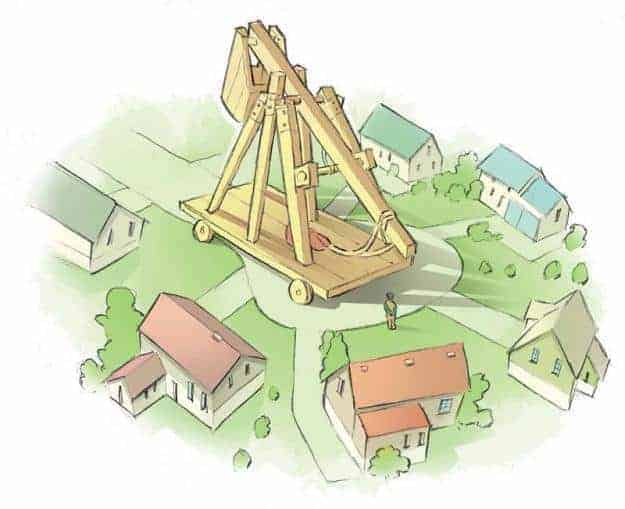 Way back in June, The Boy came to me and asked if we could build a trebuchet together; sort of a father/son bonding moment or something similarly dopey.

My wife thought it was sweet and “suggested” that since he was going off to college again in the fall it might be nice for us to do something together. I pointed out to her that The Boy and I had built a canoe together; what more did she want? Then she pointed out that that was almost 20 years ago. Besides, I had destroyed the thing just prior to completion (see Aug/Sept 2008 Issue #55) and we hadn’t done anything together since and it was about time we did before I was too old or he moved away and had kids of his own that he could ignore.

As is normal around here, I gave in to her “suggestion” and took The Boy out to the shop to look over my lumber supply and see just how big we could build this thing. I was envisioning sort of a tabletop model that could fling sugar cubes or those little frozen butter patties across the Timmy’s dining room. The Boy was hoping for something larger, maybe something we could use to defend the family homestead against Goths or Visigoths, possibly the odd Pict. I pointed out to him that we didn’t live in England and our family holdings consisted of a half-acre yard surrounding a 900 square foot rancher, and instead of Goths or Visigoths to worry about all we had were a few Vandals in the form of a small herd of Mule Deer who seem bound and determined to strip every vestige of greenery from the yard. We compromised.

We found some 2 x10s left over from some renovation project or other and got to work. I hoped the wood wasn’t supposed to have been used somewhere important. Like, maybe the floor under the new bathroom or the roof joists above the shop extension. Oh well, I’m sure I’ll find out soon enough if they’re important.

After a few days of semi-hard work, we were ready to assemble the various parts into what we assumed would become a trebuchet. Or possibly a diving platform, depending on who was reading the plans. The only thing still needed to complete the project was some type of beam axle and a whole lot of weight for the counter-balance. I searched the shop and discovered an under-utilized pipe clamp. My sawzall made quick work of it and we soon had the pipe cut down and fed through the holes in the swing arm. We piled every bar-clamp head and box of nails and screws we could find into the counterweight box and then dragged the towering structure out onto the street in front of the house. Since we lived at the end of a cul-de-sac I was hoping the neighbours wouldn’t notice.

The Boy winched the weight box high into the air while I stretched the sling down the length of the launch ramp and carefully nestled a golf ball into the leather sling I had made from one of my wife’s winter boots. We live in the Okanagan. When would she ever need a calf-high suede boot again?

I stepped back – far, far back – and gave him the signal. The Boy yanked the rope that released the winch cam. The immense counter-weight began its unstoppable descent. The massive timber beam arched high into the air accompanied by the terrible creaks and groans of tortured wood. The leather sling sped along the track and sailed high into the air. The golf ball immediately vanished from sight, never to be seen again. At least not until we turned around and saw the dog chewing it five feet from where it had trickled from the sling. Clearly some adjustments were needed.

Within the hour we had some of the most important kinks worked out and were happily firing golf balls, tennis balls and apricots over the rooftops and far down the street for the dog to fetch. Surprisingly, the entire enterprise became strangely boring very quickly and we soon wheeled the mighty structure back to the garage where it has sat ever since, never to be used again.

Until now. Because it’s Christmas, and as everyone knows, grandchildren come to visit at Christmas, and they like to go tobogganing. What could be more Christmassy than trying to bean grandkids with snowballs flung from a trebuchet as they toboggan down a hill? Not many kids can say that.

Now all we need is some snow. This is the Okanagan after all.