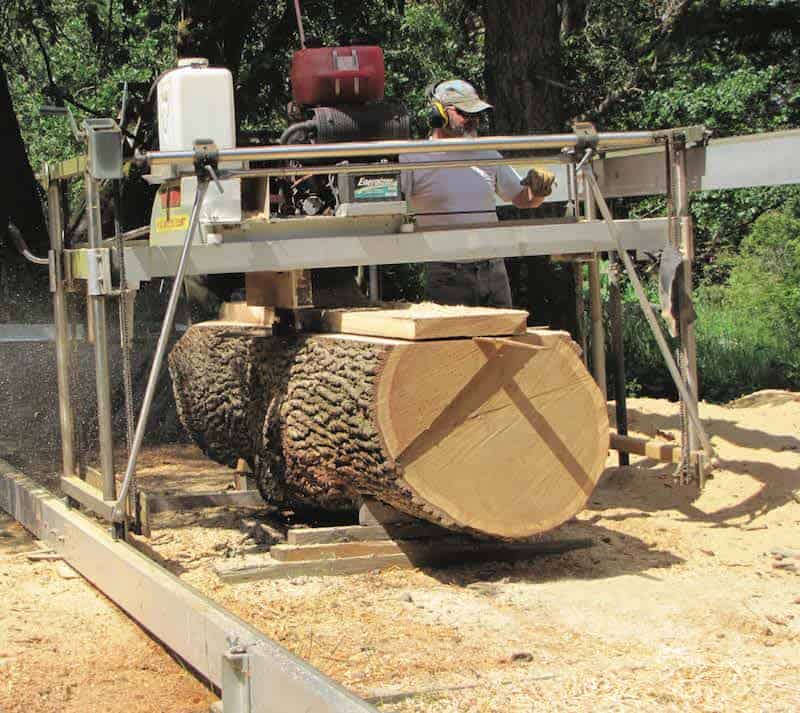 Many of the trees in the streets of Victoria are starting to die, but the Vancouver Island Woodworkers Guild is breathing new life into some of these ancient giants with their wood recovery program.

Like many Canadian cities, greater Victoria is heavily treed. Some of these trees were imported by European settlers starting in the mid-nineteenth century: the lindens, horse chestnuts, sycamores, mountain ash, and flowering cherries and plums that line our various streets, and the Japanese maples, sequoias, monkey puzzles and other specimen trees in our gardens.

Sawing Some Lumber
One of the Vancouver Island Woodworkers Guild sawyers mills up a large arbutus log recovered during their program.

Stacked for Drying
Boards being unloaded and stacked at the guild's shed after sawing. 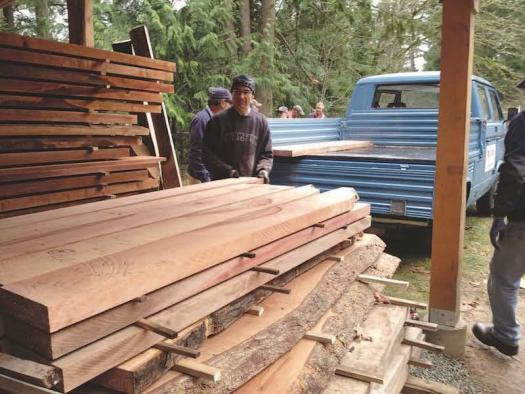 Good Neighbours
Two garry oaks, and what seems to be an ash, wait to be milled into usable lumber in a greater Victoria neighbourhood. 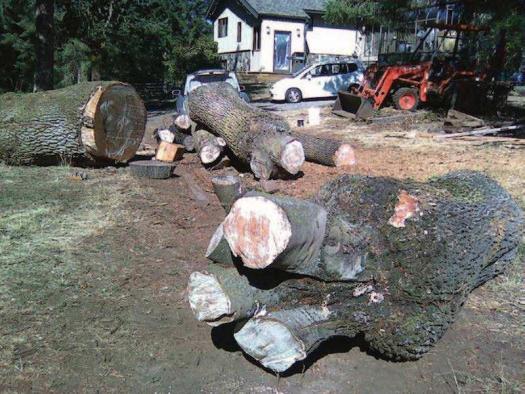 But the treescape that greeted the settlers when they arrived here was unlike that of any other Canadian city. It comprised a managed forest of garry oaks, a tree that grows only here, among which Indigenous peoples cultivated camas lilies, whose bulbs provided a primary food source. Today the surviving Garry oak meadows, seas of blue in the late spring, are one of the glories of Victoria. In addition many groves and individual trees continue to grow among houses and roads.

Sadly these Garry oaks are now dying, victims of too much summer watering, gypsy moths, amylaria, the disturbances of road and house building, or simple old age, unreplaced when their acorns are not allowed to germinate freely. The Vancouver Island Woodworkers Guild has devised a strategy to save something of these trees, at least rescuing them from the travesty of sawing them into rounds and splitting these into firewood. We save the logs and turn them into boards that woodworkers can use. We call this program wood recovery; through it we also rescue other imported and native trees: the arbutuses revered by First Nations peoples, big leaf maples, and so on.

To do this we make arrangements with commercial and municipal arborists who let us know when trees have fallen or are to be felled. We have those judged worthy of milling picked up and transported to a local sawyer with a Peterson swingblade mill. When a sufficient number of logs have accumulated, we organize milling weekends, during which the logs are cut into manageable boards. These often spend a year or two in our shed, then are sold in batches to our members. Recently we have toyed with the idea of dressing some of the boards, to make it easier to see what they offer and to help those without their own planers.

Urban trees present characteristic challenges. They almost always include metal bits that the tree has enveloped and hidden. Iron inclusions are turned blue by the acidity of the oaks, staining the wood. They also break the tips of the mill saw blades, which means that brazing on new tips is a standard milling expense.

The particular species we mainly recover also present special challenges. Neither Garry oak nor arbutus responds well to kiln drying, which means stickering and drying them for some years before dressing them for use. So purchasers have to be patient. Furthermore many of these Garry oaks and arbutuses grow at odd angles, which means that the wood within them is severely stressed. And even when they’re not stressed, Garry oak and arbutus make willful timber that often continues to move after it has been dried and dressed, or even – if you’re unlucky – when it has been turned into a bowl or incorporated into a piece of furniture. Splits can appear out of nowhere.

Nevertheless, local woodworkers value these woods—because of their remembered magnifience as trees, because of the challenges they pose, but mainly because of their beauty. The Garry oaks have all the usual grain and medullary ray features of the oak family, but their rich brown tones are quite distinctive. Arbutus wood has some of the characteristics of cherry wood, a kind of grainless clarity, and pink tones. At our wood shows, items made from recovered wood are identified and receive special attention.

The sale of recovered wood is a major source of income to the Guild. In the first instance, this money covers the haulage and milling costs. But more importantly it funds an annual prize and a scholarship for students in the Fine Furniture Making program at Camosun College. It also makes it possible for us to buy and distribute wood to the woodworking programs in local schools, whose resources for buying materials for their students are surprisingly limited. In this we are also helped by local merchants who donate wood for school use.

Over the years wood recovery has become one of the defining undertakings of the Vancouver Island Woodworkers Guild. It has helped us to build our own community and to demonstrate our respect for the trees among which we live. Oak Bay, one of greater Victoria’s 13 municipalities, has a motto that is very much to the point: sub quercu felicitas, happiness under the oaks.

The chairs included here, example of projects using recovered wood, are from two recent shows in Victoria. Those by Beth Grayer and Murray Tomkins were part of “Making It,” an exhibition of chairs made by graduates of the Fine Furniture Program at Camosun College at the University of Victoria’s Legacy Gallery. That by Phil Makin is from the “Visions in Wood” put on by the Vancouver Island Woodworkers Guild at the Cedar Hill Arts Centre. 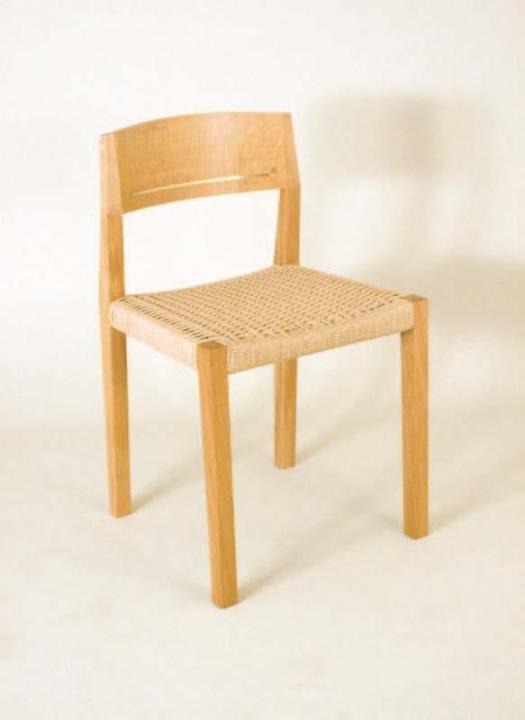 Beth Grayer’s description of her piece captures the spirit that informs the Guild’s wood recovery program. “This chair was designed to be at home in a garry oak meadow. I set out to express the gentle tension of the garry oak tree: the curved seat grounds the body, while the back rail offers support and lift. The brass inlay was used to absorb and reflect changing light, and the woven seat mimics the texture of the bark. The wood, milled by the Vancouver Island Woodworkers Guild, dried in my backyard for three years.” 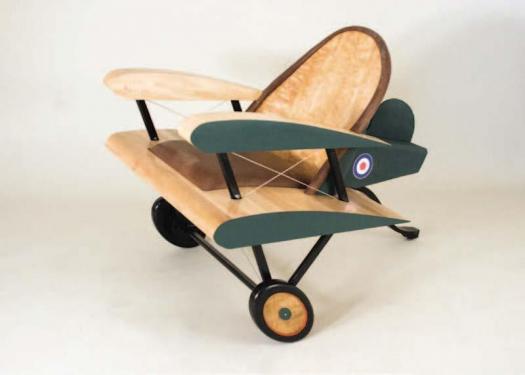 The primary building material for Murray Tomkins’s “Plane Chair,” as luck would have it, is London plane, a tree that grows on many of our boulevards. It too was milled by the Guild. Murray made many computer drawings of WWI biplanes. These digital drawings ultimately permitted the use of a CNC router to shape the seat, while a router with a template was used to shape the upper wing arms. The back leg, or trail dragger, is made of laminated oak, the curved back uses “wiggle board” and veneer, while the tail section is made of Styrofoam, which was covered with fabric, just like the historical planes on which it is playfully modeled. 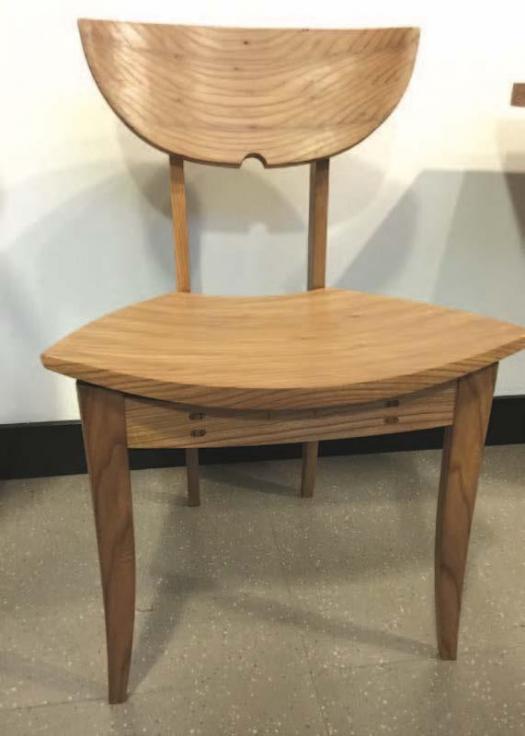 Phil Makin’s chair is built of elm recovered by the Guild and is inspired by a Michael Fortune design. Much of the time invested in building the chair went into constructing jigs, for example, a loose tenon jig to produce double mortises in long grain and end grain pieces. The result is a handsome, robust chair. Unusually for a wood show, visitors were invited to sit in the chair. Many did and of all different body shapes. Their responses were uniformly positive. 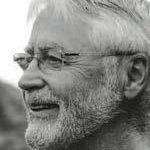 John, recently retired from UVic English, relishes life in Victoria surrounded by great trees and passionate woodworkers. May at least one grandchild become a woodworker—all those tools, all that wood!